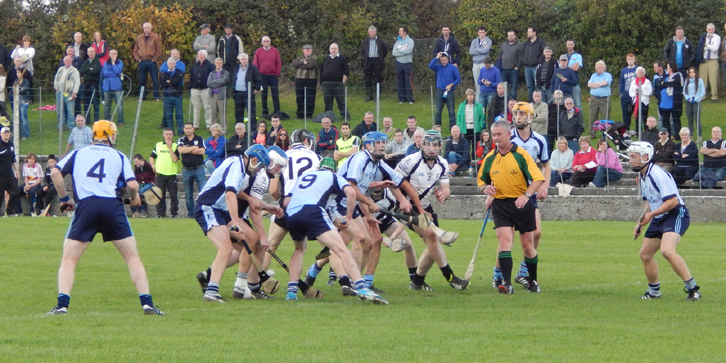 A Donnacha Quinn free in third minute got Éire Óg off to a positive start. A minute later Pearse Morris added an effort from play and the Blues led 0-2 to no-score. Brian O’Meara responded with a converted free in the sixth minute to get Kilruane off the mark, but Éire Óg hit back with a Donnacha Quinn free to bring eight scoreless minutes to a conclusion in the 14th.

Shane Quinlan won a penalty for Kilruane which Séamus Hennessy planted in the roof of the Éire Óg net to hand the MacDonagh’s a 1-1 to 0-3 lead. Éire Óg spurned a goal-scoring opportunity in the 17th minute when Jack Peters recovered just in time to block Paddy Murphy’s effort. A Michael Heffernan effort tied the game soon after, but points from Shane Quinlan and Séamus Hennessy (free) presented Kilruane with an encouraging 1-3 to 0-4 lead by the 20th minute.

Donnacha Quinn (free) responded for Éire Óg before Liam Gibson threw himself at a Tommy Heffernan effort at goal in the 26th minute and denied the Blues a certain three-pointer. Donnacha Quinn converted the resultant ’65 and the sides were level (0-6 to 1-3).

An Andrew Coffey point following good work from Pearse Morris presented Éire Óg with the lead in the 29th minute, but Kilruane closed out the half impressively with points from Justin Cahill and Brian O’Meara (free) handing the MacDonagh’s a 1-5 to 0-7 interval lead.

Éire Óg were much improved immediately after the break and out-scored Kilruane 1-4 to 0-1 during an impressive thirteen-minute spell.

Michael Heffernan set Éire Óg on their way with a neat point in the 34th minute. Seconds later Donnacha Quinn (free) added to the Éire Óg tally and although Brian O’Meara responded with a point for Kilruane the Blues were in irresistible mood with points from Andrew Coffey and Donnacha Quinn helping the north champions into a 0-11 to 1-6 lead by the 40th minute.

In the 43rd Pearse Morris struck for an Éire Óg goal. James Mackey was instrumental in winning the ball and creating a goal-scoring opportunity for Paddy Murphy. Kilruane ‘keeper Thomas Williams saved brilliantly, but Morris buried the rebound and Éire Óg led by five.

Kilruane needed a tonic and found it in the 46th minute when Séamus Hennessy’s long-range free broke to Ray McLoughney and the wing-forward fired home an opportunist goal (1-11 to 2-6).

In the 47th minute Kilruane ‘keeper Thomas Williams advanced to make a telling save when denying the raiding Paddy Murphy following some excellent combination play between James Mackey and Donnacha Quinn. Seconds later Brian O’Meara landed a great point to leave just one between them.

Dáire Quinn fired over a long-range point in the 48th minute and Donnacha Quinn added a free to his side’s tally as this encounter moved into the final ten minutes (1-13 to 2-7). Kilruane needed a little encouragement, but it was the Éire Óg lads who seized the initiative in the 52nd minute when Pearse Morris broke Paddy Murphy’s teasing delivery down to Michael Heffernan and Heffernan buried his effort past a helpless Thomas Williams. Two minutes later Éire Óg carved open the Kilruane defence once more, but Paddy Murphy’s snap shot flew narrowly wide.

A Justin Cahill point with six minutes to play cut the Éire Óg lead to five before Séamus Hennessy opted to go for goal from a 21-yard free in the 58th minute. Éire Óg ‘keeper Michael McNamara saved Hennessy’s shot and a Michael Heffernan point on the hour mark brought the scoring to a conclusion.

The draw for the Clean Ireland Recycling County Senior Hurling Championship quarter-finals was made on Sunday evening – Nenagh Éire Óg were drawn to face Thurles Sarsfields. That game will take place on Sunday, October 19th at 4pm in Semple Stadium, Thurles. The quarter-final clash between Burgess and the Templederry Kenyons will precede that clash.