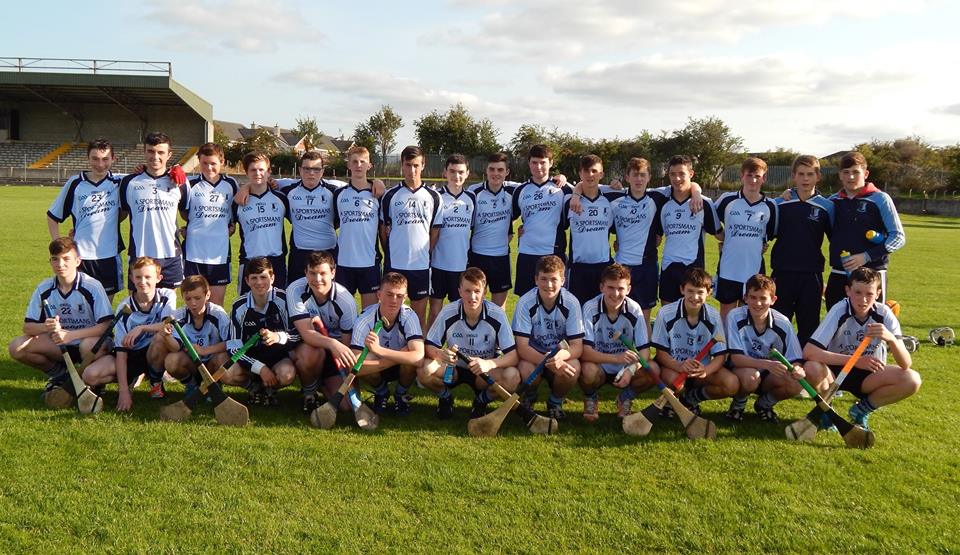 Under-16 campaign comes to a heart-breaking end

The under-16A hurlers’ thrilling championship campaign came to heart-breaking end at Annacarty on Saturday afternoon when Éire Óg suffered a four-point defeat against a terrific Moycarkey-Borris team in the county final.

The sides traded frees initially before Éire Óg took the lead thanks to a Jake Morris point following great work from Fiachra Carey in the fourth minute (0-2 to 0-1). Moycarkey-Borris roared back into this contest, however, when firing five consecutive points to take a 0-6 to 0-2 lead with fourteen minutes played.

Éire Óg needed to respond and did so in the 15th minute in great style – centre-back Mark O’Farrell picked out Killian Malone at full-forward with a searching delivery and Malone beat the Moycarkey-Borris ‘keeper with a smart turn and shot (1-2 to 0-6).

Moycarkey-Borris surged into a four-point lead thanks to two converted frees and an effort from play – Éire Óg trailed 1-2 to 0-9 after nineteen minutes.

In the 21st minute Jake Morris set up Conor McCarthy for a point while in the 23rd a Jake Morris score from play closed the gap to two.

Moycarkey-Borris hit back with a point of their own before Conor Bonnar set up Killian Malone for a terrific point in the 28th minute to leave two between them (1-5 to 0-10).

Right on the half hour mark Éire Óg ‘keeper Scott O’Brien pulled off two excellent saves to deny the raiding Moycarkey-Borris forwards – the Mid champions added a point to their tally from a disputed free in the 31st minute.

Éire Óg mounted a great scoring surge in first half injury time. A left-handed Seán Shanahan point closed the gap to two before a combination of Seán Shanahan, Fiachra Carey and Killian Malone won a turnover at left wing-forward and Jake Morris raced through on goal before finishing from a tight angle.

During the opening minute of the second half two Moycarkey-Borris points wrestled the lead away from Éire Óg. Conor McCarthy responded with a point to tie the game and when Killian Malone was fouled in the 33rd minute Jake Morris converted the placed ball and the Blues led 2-8 to 0-13.

Full credit to Moycarkey-Borris however – between the 36th and 49th minutes the Mid Tipperary champions hit 1-6 without reply to establish a 1-19 to 2-8 advantage; the key goal materialised in the 40th minute.

Despite being hit by such a whirlwind of scores it was heartening to see the Éire Óg lads grit their teeth. Indeed, Moycarkey-Borris were held scoreless for the remainder of this contest as Éire Óg desperately tried to mount a comeback.

A Conor McCarthy free in the 51st minute cut the Moycarkey-Borris lead to seven while Éire Óg created a goal chance in the 55th minute – unfortunately Seán Phelan was half-hooked with the goal in his sights and the Moycarkey ‘keeper made a telling save. Seconds later Moycarkey cleared off their lines following Conor McCarthy’s teasing delivery from the 65-yard line.

A brace of frees, which came courtesy of Jake Morris and Conor McCarthy, cut the Moycarkey-Borris lead to five before a Conor Bonnar point in the 61st minute reduced the deficit to four.

Although there had been a whole series of stoppages during this contest under two minutes of injury time was played and with that went Éire Óg’s chance of mounting a late charge.

The Nenagh Éire Óg club would like to congratulate Moycarkey-Borris on their success.

Everyone associated with the club is immensely proud of the manner in which this Nenagh Éire Óg group went about their business this year. The lads are a credit to the club, their town, their families and themselves. Our thanks also go to team mentors David Minogue, Noel Coffey & Eamon O’Brien.