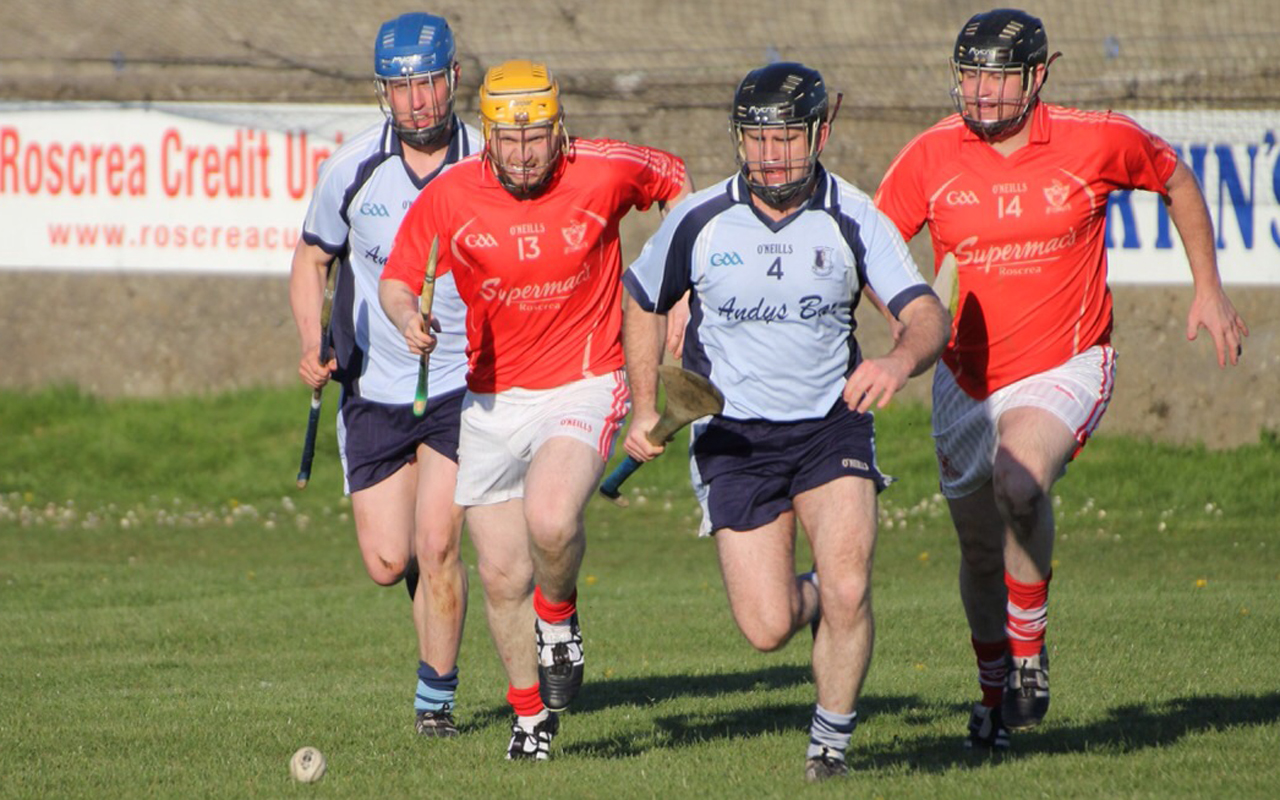 Although the junior A and junior B hurlers suffered narrow league defeats the junior A Camogie team earned a terrific win and four of the Blues’ players are this week preparing to play with Tipperary in next Saturday’s All-Ireland minor final. 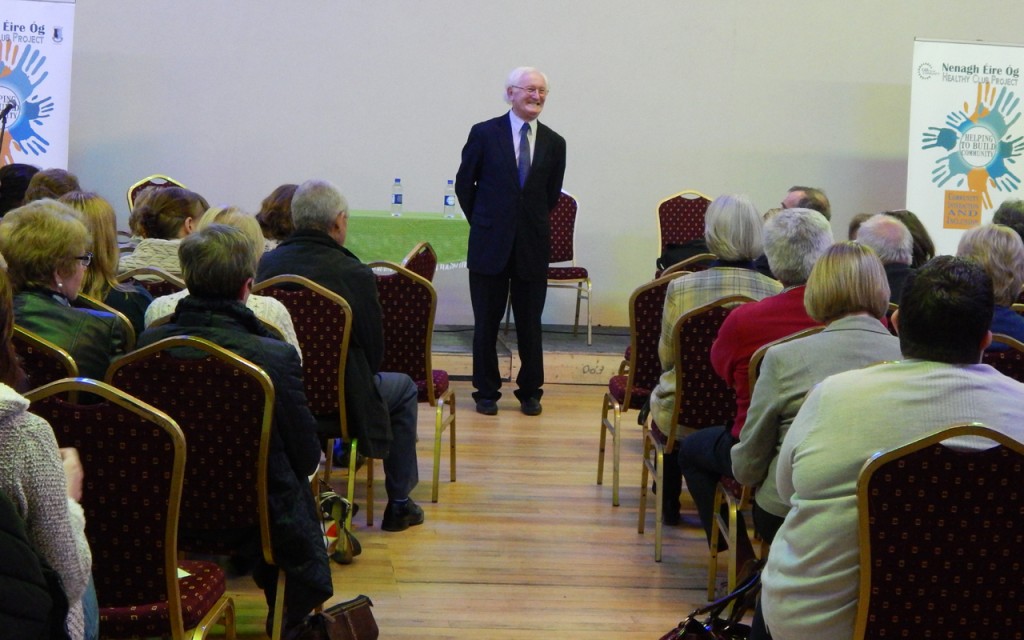 Senior: Nenagh Éire Óg’s next match in the county senior hurling championship against Ballina was scheduled to take place on Sunday, April 26th, but that game has been postponed. The Blues’ final group game will be against Clonoulty-Rossmore. Please keep an eye on the club website and associated social media channels for updates on the re-fixture of the Ballina game. The first round of the Hibernian North Tipperary Senior Hurling Championship is provisionally scheduled to take place during the coming weeks. Éire Óg have been drawn against Toomevara in the first round.

Junior A: Greg Browne’s junior A hurling team played their first competitive game of the year on Saturday evening when losing 0-19 to 1-19 against Roscrea in Roscrea. For a full match report on this game please see the club website.

Junior B: Cian Tucker’s junior B hurlers suffered an agonising one-point league defeat (2-16 to 2-17) to Newport at MacDonagh Park, Nenagh on Sunday evening. The Blues recovered a four-point interval deficit only to be denied by a late Newport surge. For a full match report on this game please see the club website. 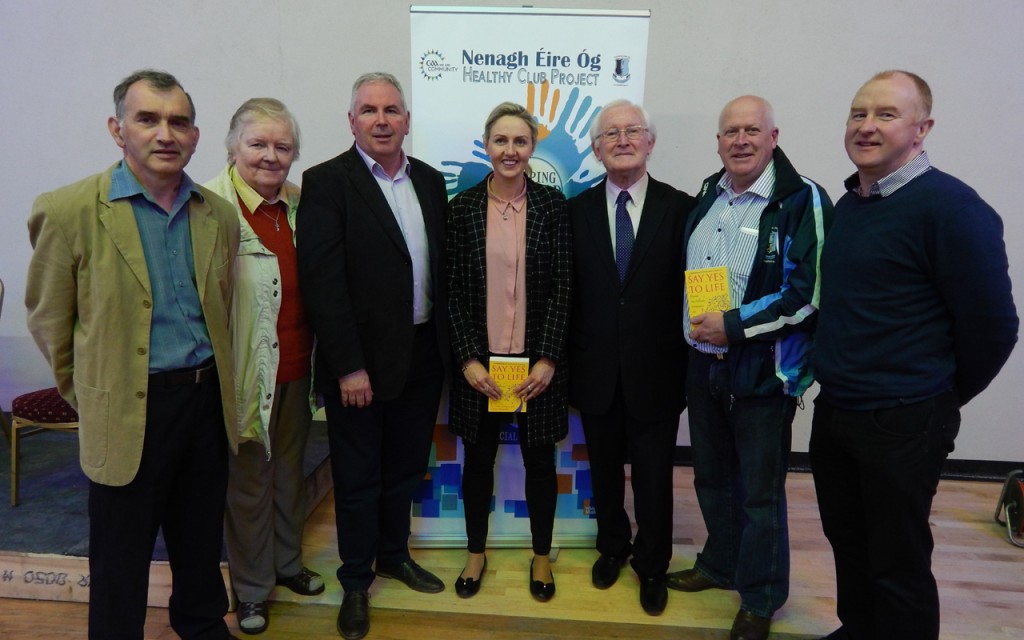 Christy Kenneally pictured with the Nenagh Éire Óg Healthy Club Project team and Croke Park’s Stacey Cannon at the ‘Night with Christy Kenneally’ event which was hosted by the Scout’s Hall on Wednesday, April 15th.

Minor A:Following Newport Gaels’ win over Portroe the Nenagh Éire Óg minor footballers finished second in their group and will now play Kildangan in a north Tipperary minor A football championship semi-final on Wednesday, April 22nd in Puckane at 7pm. Extra-time will be played in the event of a draw. In their corresponding semi-final Newport Gaels will play Ballina.

Well Done: A huge well done to the Healthy Club Project team which hosted a ‘Night with Christy Kenneally’ in the Scout’s Hall on Wednesday, April 15th. Once more the event proved a resounding success and Nenagh Éire Óg was commended for its work in the community by Croke Park’s Stacey Cannon.

Sympathy: The Nenagh Éire Óg club would like to offer its sympathy to the family of Denis Mulcahy who passed away last week. Denis was the beloved husband of Margaret and loving father of Michael, John, Pádraig and Donnacha. Denis will be sadly missed by his loving family, brothers Tommy and Chris, sisters Ann and Josie, daughters-in-law, grandchildren, beloved nephews John and Denis Griffin, nieces, nephews, sisters-in-law, brothers-in-law, relatives and friends. 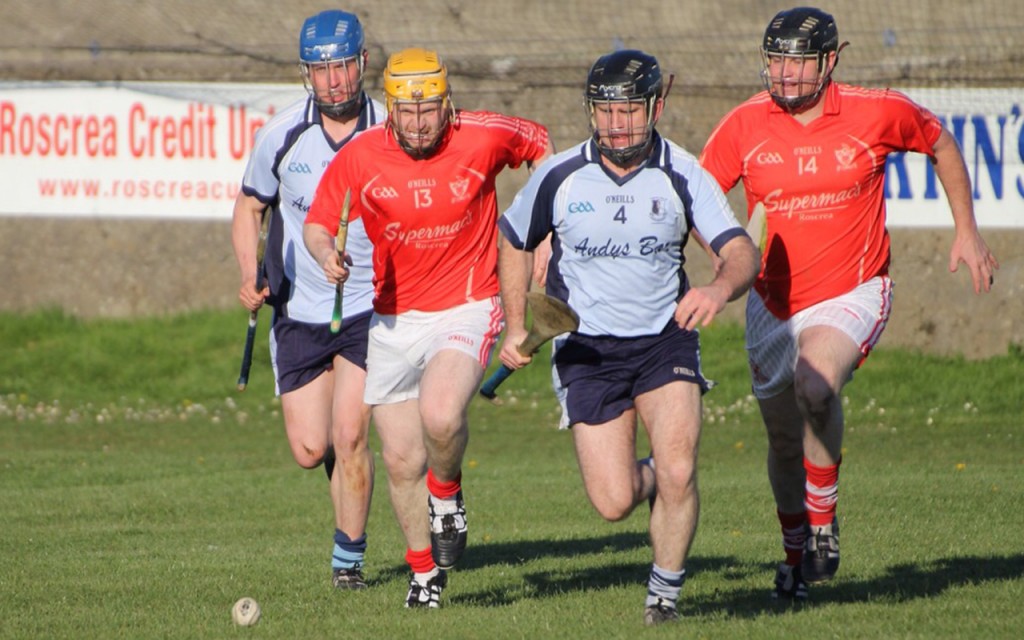 Lenny Ryan pictured in action for the junior A hurlers in Roscrea on Saturday evening. 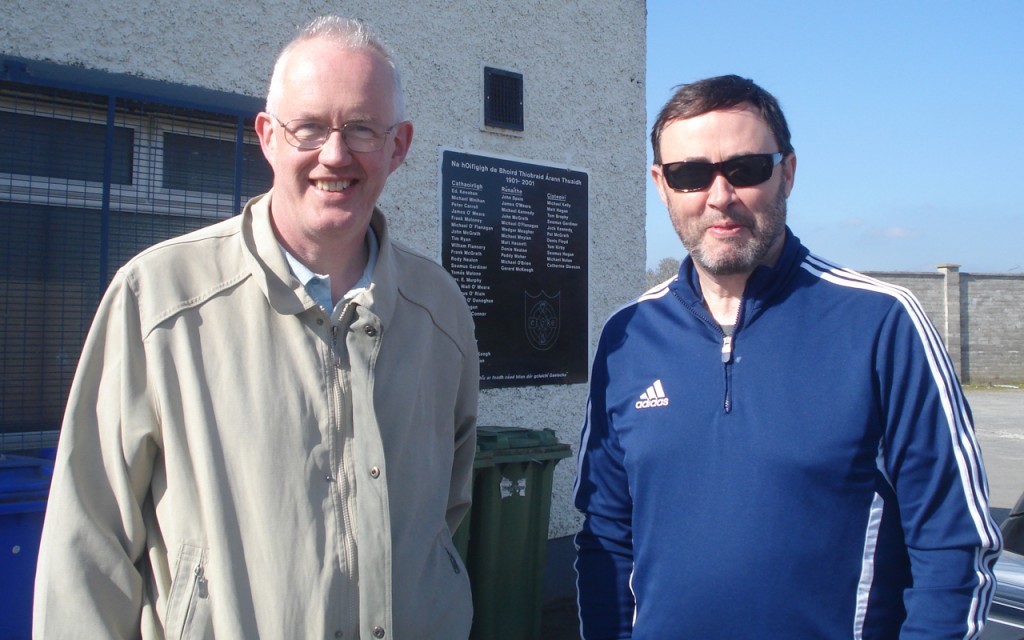 Best Wishes: Our sincere sympathy to life-long juvenile coach Tommy Mulcahy on the recent passing of his brother, Denis. As a mark of respect under-6 and under-8 training was cancelled last weekend.

Under-10: Under-10 training continues at the same times. There is a challenge match planned against Roscrea for next Saturday – more from management during the week.

Under-12: The Nenagh Éire Óg Under-12 Street League is up and running and will continue for the next three Mondays at 5.30pm. The boys and girls of the town are enjoying their hurling, having fun and making friends.

Under-14: Our under-14 hurlers travelled to Borrisoleigh on Saturday last for the Féile na nGael hurling finals. Our opponents in the semi-final were Toomevara and after a competitive game we came out on top on a scoreline of 2-7 to 0-4. The final, against Borris-Ileigh, was played immediately afterwards. A more determined host side came out on top in the end on a scoreline of 2-6 to 1-4. Well done to all the lads on reaching the final. Meanwhile our under-14 development squad had a very competitive and even challenge against Kilruane on Sunday morning in Cloughjordan. Thanks to Kilruane for hosting the game. We will have more games for this team over the summer. We have a bye in the football championship this week. Our next match is away to Inane Rovers in Roscrea. Get well wishes to Conor Malone from management and your teammates. 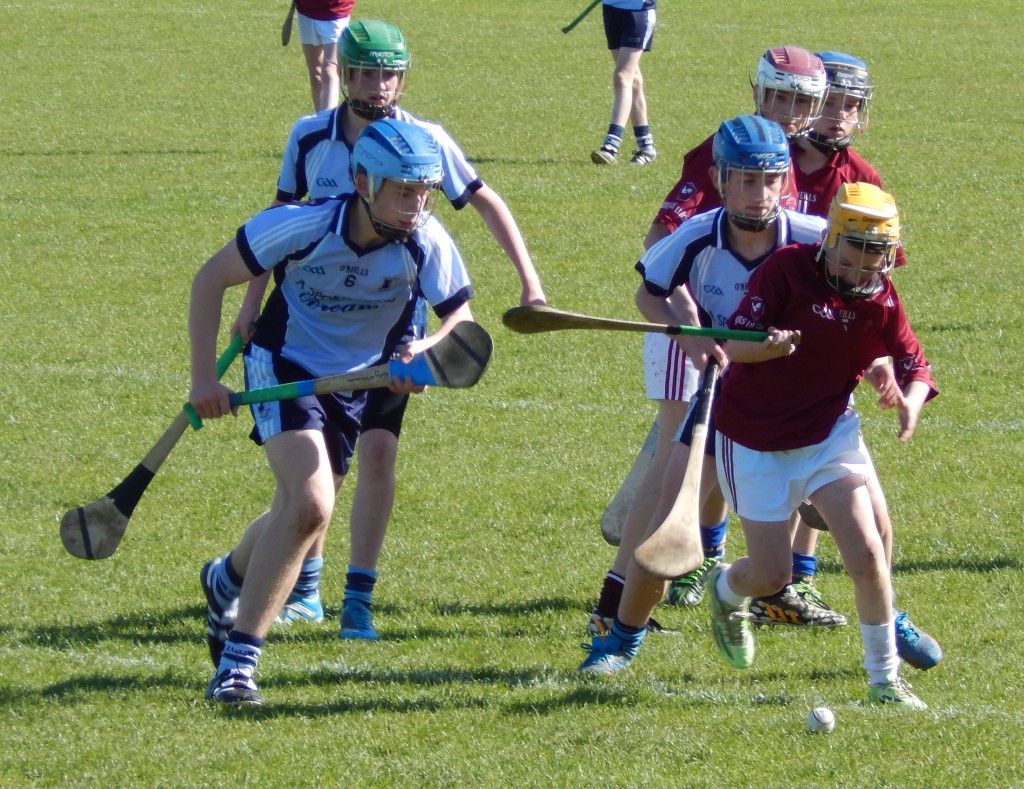 The Nenagh Éire Óg under-14 hurlers were narrowly defeated by an outstanding Borris-Ileigh team in the north Tipperary Féile na nGael final on Saturday.

Under-16: The under-16 footballers enjoyed a 4-18 to 1-2 win over Ballina last week. Jake Morris (3) and Killian Malone produced the goals. Although there were many impressive performers for Nenagh special mention must go to Peter Folan, Jake Morris and Conor McCarthy for their starring roles. 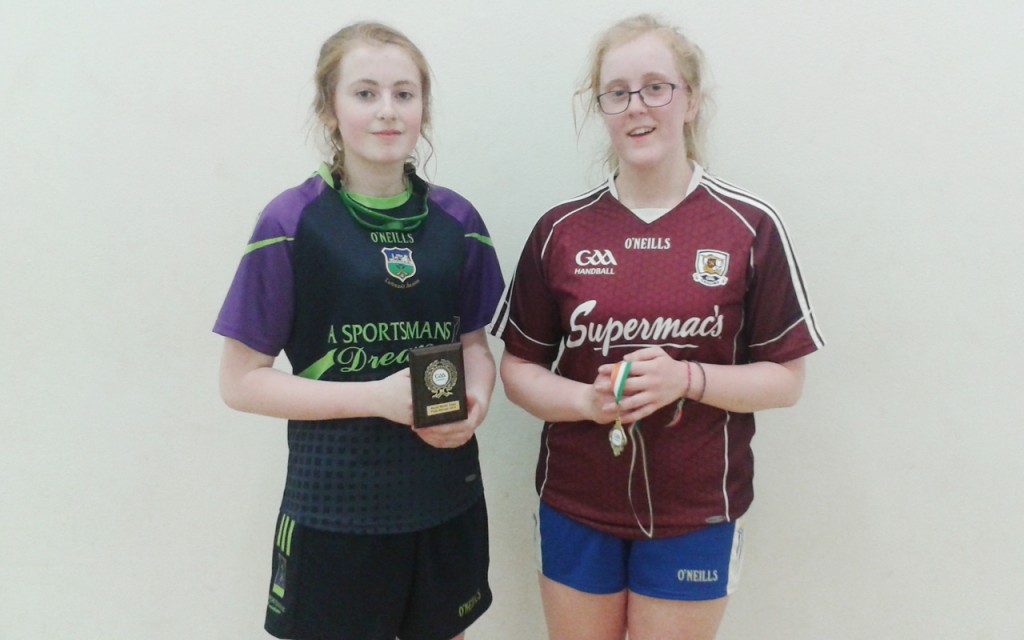 Sinéad Meagher pictured after winning the plate competition at the Junior Nationals. 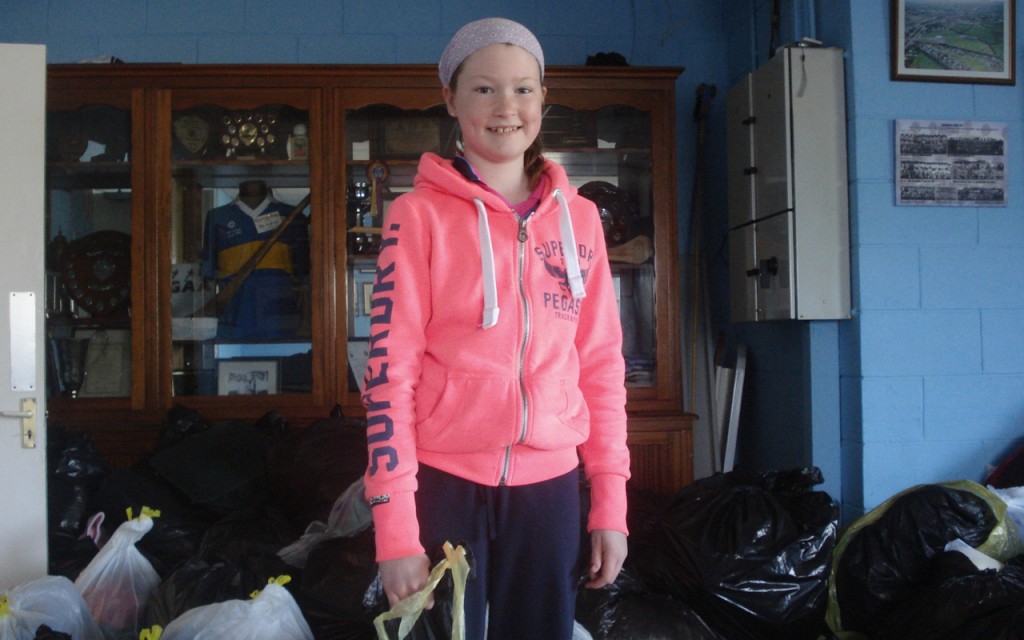 Caoimhe Connolly pictured during the Camogie club’s clothing recycling drive at the MacDonagh Park Complex in Nenagh on Saturday.

Under-12: The under-12 team took part in an excellently organised and run blitz in Ballina at the weekend. The girls had great fun and were treated extremely well by their hosts. Next Saturday will be a special day out for this panel as they travel to Semple Stadium for a blitz. Have a great day out girls!

Under-16: The under-16A side face Drom & Inch on Friday at 6.45pm in Nenagh while the under-16C team play Moneygall on Monday evening. We did not have the result of this fixture at the time of going to press.

Junior A: The junior A side defeated Kildangan 2-18 to 1-2 on Sunday in the final game of the round robin series of the league. For a full match report please visit our website www.nenagheireog.com. We have won all of our games and so qualify for the knock-out stages as group winners. The semi-final is fixed for next weekend. Please check our website and social media for details.

Clothes Collection: We held a very successful clothes collection in the club house on Saturday last. Thanks to Denise, Catherine and Marie for organising this and a special thank you to all who donated.

Tipperary: Congratulations to Grace O’Brien, Maeve Coffey, Rachel Maher, Sarah Quigley and the Tipperary minor team who had a comprehensive victory over Galway in the All-Ireland semi-final last Saturday. They have a busy two weeks ahead as they face Kilkenny in the final this weekend and Cork the following weekend in the Munster final. Please check our website and social media for details of these fixtures. We hope a huge crowd travel from the club to support the girls.

Best wishes: We wish a speedy recovery to Hazel Coffey who sustained an injury in training recently. 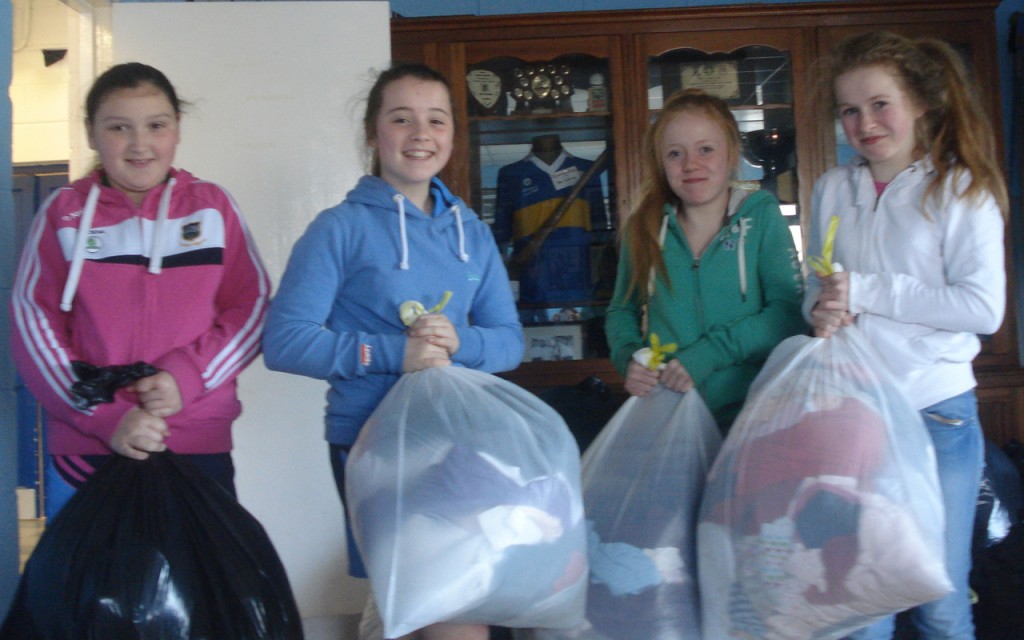 Avril Dooley, Hannah Coffey and friends pictured during the clothing recycling drive at the MacDonagh Park Complex in Nenagh on Saturday.