Despite the heartache of losing the county quarter-final on Sunday there is still plenty to savour for the Blues. On Sunday our under-13 hurlers captured the north Tipperary plate in great style while our junior A hurlers are this week preparing to face Skeheenarinky in a county final. And, our under-16 Camogie team have also progressed to their respective county final.

Senior: Nenagh Éire Óg’s senior campaign came to an end at Semple Stadium on Sunday afternoon when Liam Heffernan’s men came undone thanks to a Thurles Sarsfields free in the final minute of extra-time. The Blues walked out of Semple Stadium with their heads held high following a determined display which featured all of the positive values that we have come to associate with this group of players. Éire Óg would like to wish Thurles Sarsfields all the very best in next week’s county semi-final.

To read a full report on this 0-19 to 0-20 quarter-final defeat after extra-time please click here.

Nenagh Éire Óg would like to thank the entire panel of players for the manner in which they represented the club, their families and themselves during the game – Sunday represented the senior team’s 16th competitive game this year (won 14, one draw and lost one by a point). During the campaign Éire Óg also won the north championship and the premier division league title.

Nenagh Éire Óg would also like to thank the management team for all of their efforts – namely Liam Heffernan (manager), John Fitzgerald (coach), Enda Costello (selector) and Noel Coffey (selector).

Junior A: The Blues will take on south Tipperary’s Skeheenarinky in the Clean Ireland Recycling County Junior A Hurling Championship final on Saturday, October 25th in Leahy Park, Cashel at 3.30pm. The game will be preceded by an intermediate quarter-final between Thurles Sarsfields and St Mary’s, Clonmel (2pm).

Everyone associated with the team is immensely proud of what this group of players have achieved this year and we would appeal to you to support the lads in the up-coming county final.

Under-6 & Under-8: The under-8 boys travel to Kilmacud Crokes for a tournament this weekend and should enjoy a great day out – more information from management during the week.

Under-13 Hurling Plate: Well done to our under-13 hurlers who captured the north under-13 title when they defeated Borris-Ileigh on Sunday last on a scoreline of 5-7 to 1-6. Despite playing against a stiff breeze in the first half Éire Óg opened the scoring when Conor Robinson pounced for a goal from a breaking ball. Cian Griffin added a second midway through the first half to leave the half-time score Éire Óg 2-2 Borris-Ileigh 0-1. Second half goals from Barry Coffey, Cian O’Farrell and Conor Malone secured the victory for the Blues. This concludes the hurling activity for the year. Thank you to the management team of John Phelan, Conor O’Donovan, Phil Hennessy and Michael McNamara and a big thanks to all the players for their commitment during the year. 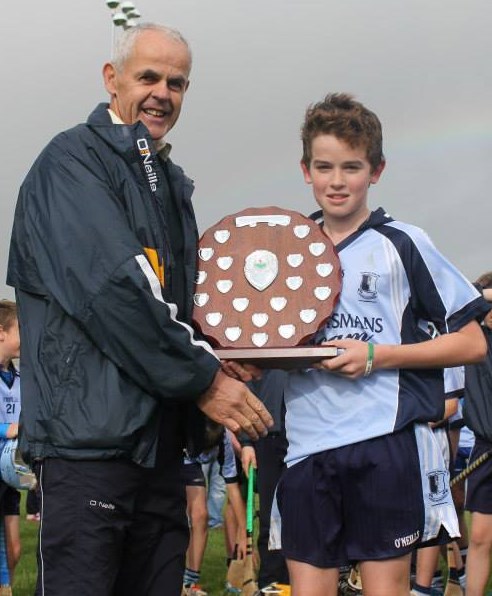 Well done to Sinéad Meagher who competed in the Junior Singles Colleges Munster Final recently and to Eimear Meagher who competed in the Junior Doubles Colleges Munster Final with Síle Spain of Lahorna. The girls eventually lost out, but reaching two Munster finals is still a great achievement for St Mary’s Convent Secondary School.

Under-12: Hard luck to our under-12 team who were defeated by Éire Óg Annacarty in the Shield Final on Sunday last. Thanks to the panel of players and their mentors for all their hard work.

Under-16: The under-16 team have qualified for the county final after a tremendous win over Éire Óg Annacarty in the championship semi-final at The Ragg on Sunday. We are due to meet Newport in the decider. Please keep an eye on our website for details of this game.

Minor: Our minors are expected to be in championship action this weekend. Mentors will be in touch with the details.

Flag Day: Thanks to everyone who volunteered with our various collections over the weekend and to all who so generously donated. Your kindness is very much appreciated.

Hard Luck: Hard luck to our senior hurlers who were defeated by Thurles Sarsfields in the championship over the weekend and best wishes to our junior A hurlers in the county final next weekend from all in the Camogie section.