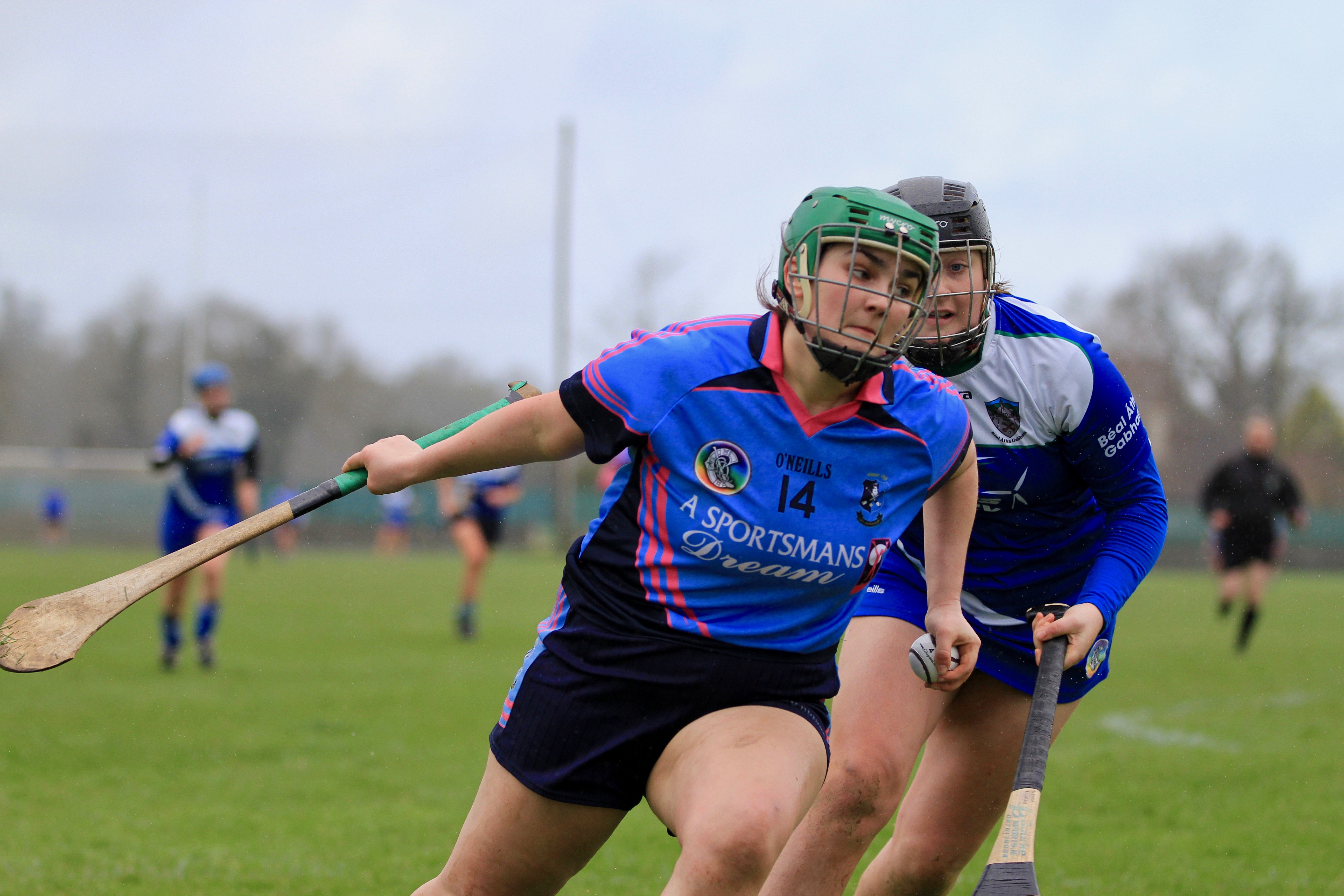 With both of our senior teams in action this weekend and the staring role played by Callan Scully with the Tipperary minor footballers there is plenty to read in this weeks combined adult, juvenile, camogie and handball club notes. 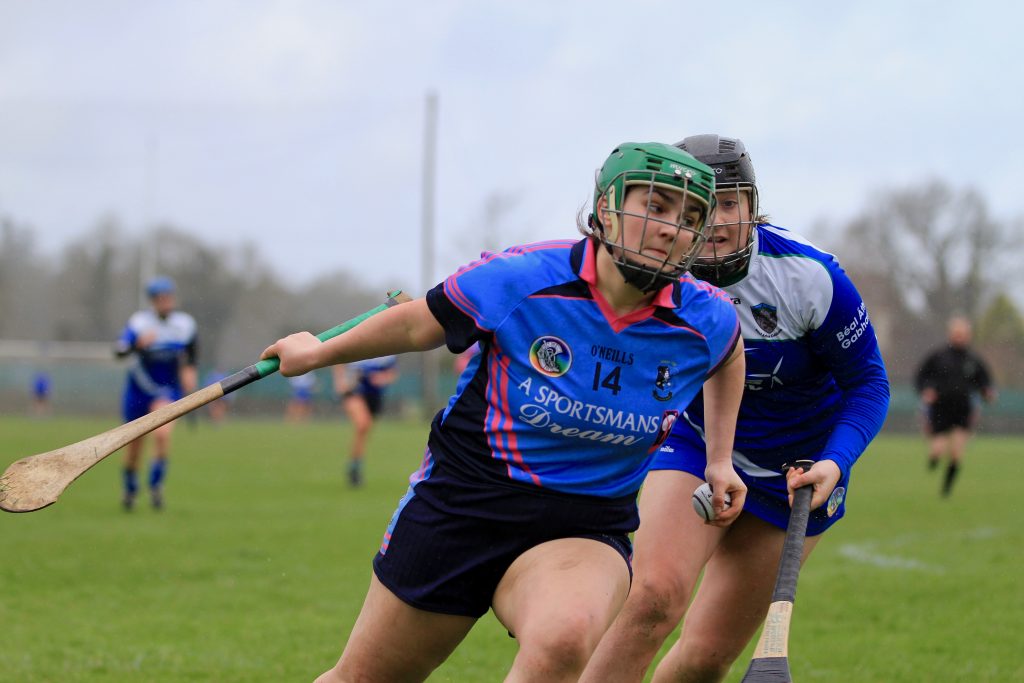 Our senior hurlers played their opening match in the Tipperary Water county senior hurling championship today in Dolla and recorded an impressive nineteen points win on a scoreline of Nenagh Éire Óg 2-24 Roscrea 0-11. Nenagh’s first goal came courtesy of a James Mackey shot following great work from Pearse Morris and Paddy Murphy while Morris again, set up the second goal when he found Tommy Heffernan who finished after his initial shot was cleared off the line. Our next senior match takes place on Saturday evening, April 21st, in Newport when Ballina are the opposition in the first round of the North Tipperary senior hurling championship. Throw-in time is 18:30. 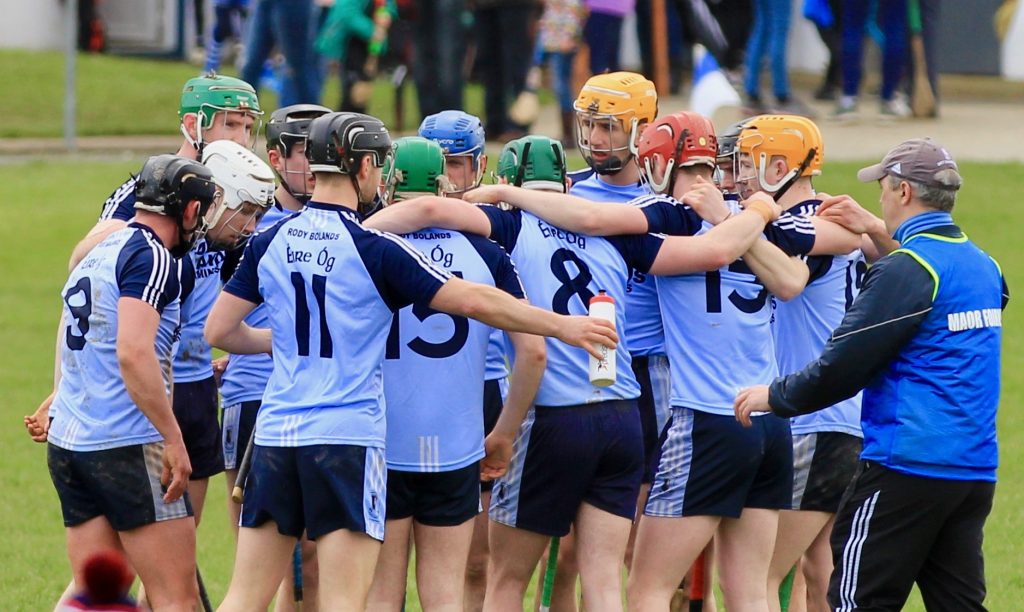 Our minor hurlers opened their championship campaign on Thursday last in Cloughjordan and they were unfortunately beaten by Toomevara 1-21 to 0-16. The lads next championship match wont take place until July when the Leaving and Junior Certificate exams are completed. This year the minors are managed by Paul Lillis, Ger Tucker, Phil Hennessey, Shane Connolly and Adam Grattan. 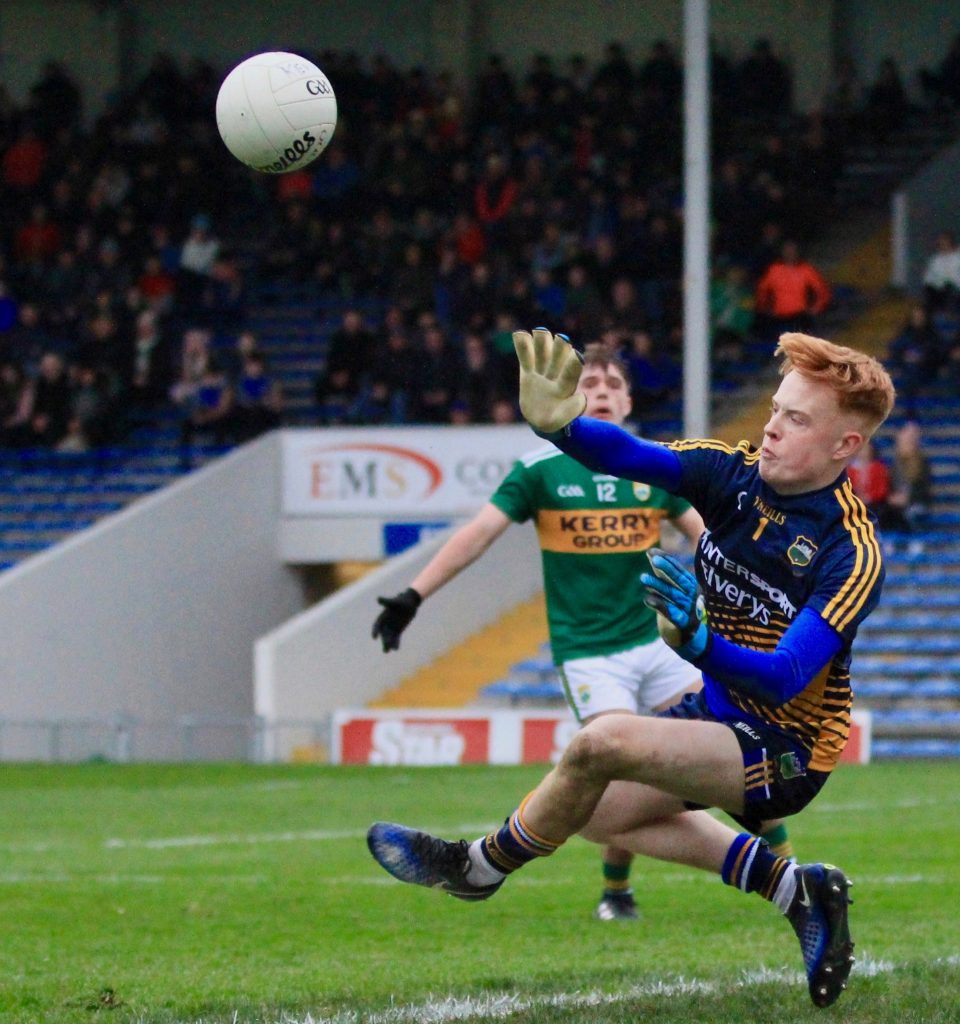 Callan makes a dramatic save in the 27th minute

We send our commiserations to Callan Scully and the Tipperary minor footballers who were beaten 0-4 to 1-15 by Kerry in the opening round of the Munster championship on Wednesday evening last. Despite the result Callan gave a superb performance in goals where he pulled off two amazing first-half saves to keep the Premier in the game. His overall performance was beyond his years as he confidently organised his six backs and delivered pin-point kick outs throughout the game. See the Twitter link below to watch the second of his first-half blocks.

Tipperary now face Limerick this Wednesday at 18:30 in the Gaelic Grounds and we send Callan and the team our best wishes.

Minor champions @Kerry_Official on the attack Weds night as #Tipperary goalkeeper Callan Scully is forced to produce a great save-highlights of the @MunsterGAA minor championship Mon @ 20.00 on @SportTG4 pic.twitter.com/aMXy2xRPf3 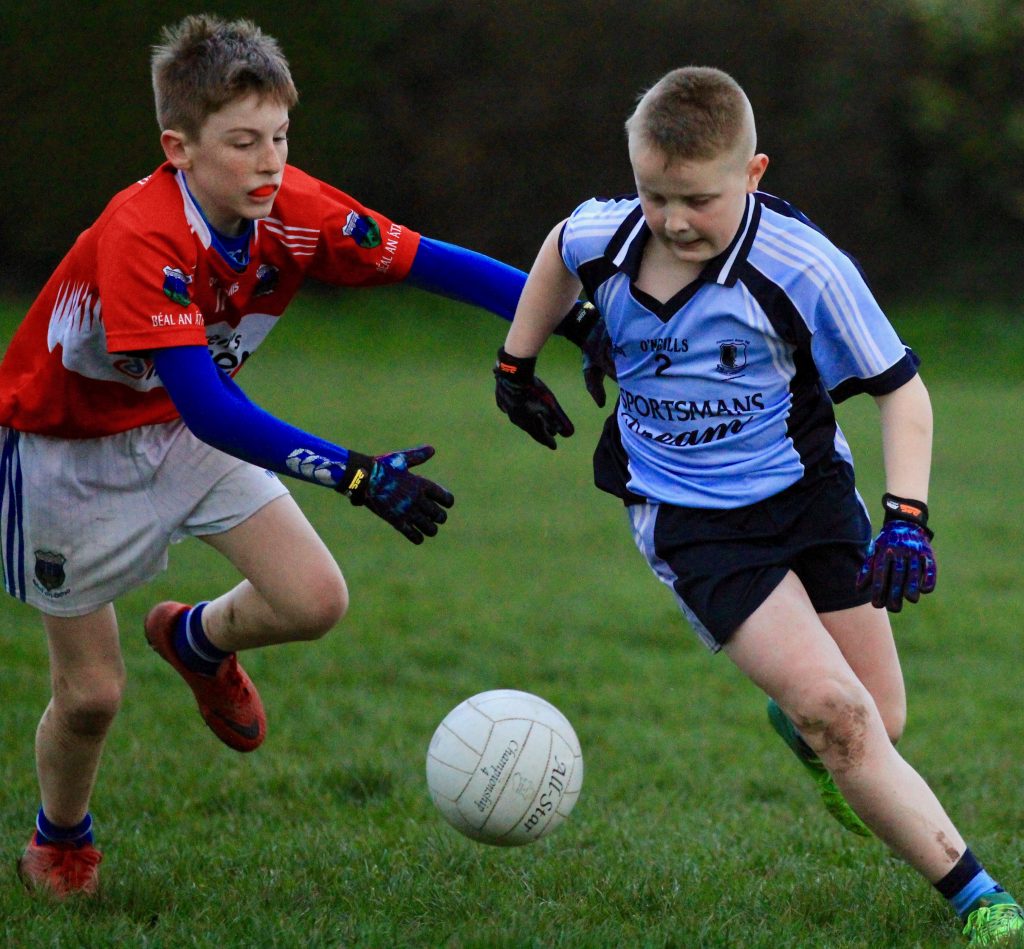 Action from the under-12 football game against Ballina

Our under-6 side had their first outdoor training on Saturday with great numbers in attendance and great fun had by all. Please make sure all children are registered and practicing at home. Training continues next Saturday at 10am.

Under-8 training continues every Wednesday and Saturday at the usual times. Great effort been made by the boys at training and at home.

Under-10 training continues Wednesday evening at 5:15 and Saturday morning at 10am.

Our under-12 A football team bowed out of the championship last Friday night against a very strong Ballina side. Our under- 12 D’s are playing their quarter final this Friday evening.
Training continues usual times this week for both hurling and football

The under-14s had a good win against Ballinahinch/Templederry in the first round of the football championship on Wednesday. They take on Toomevara in Nenagh this Thursday at 6.30pm in round two. Please come out to support the boys.

Under-16 training continues every Tuesday, Thursday and Saturday at the usual times. 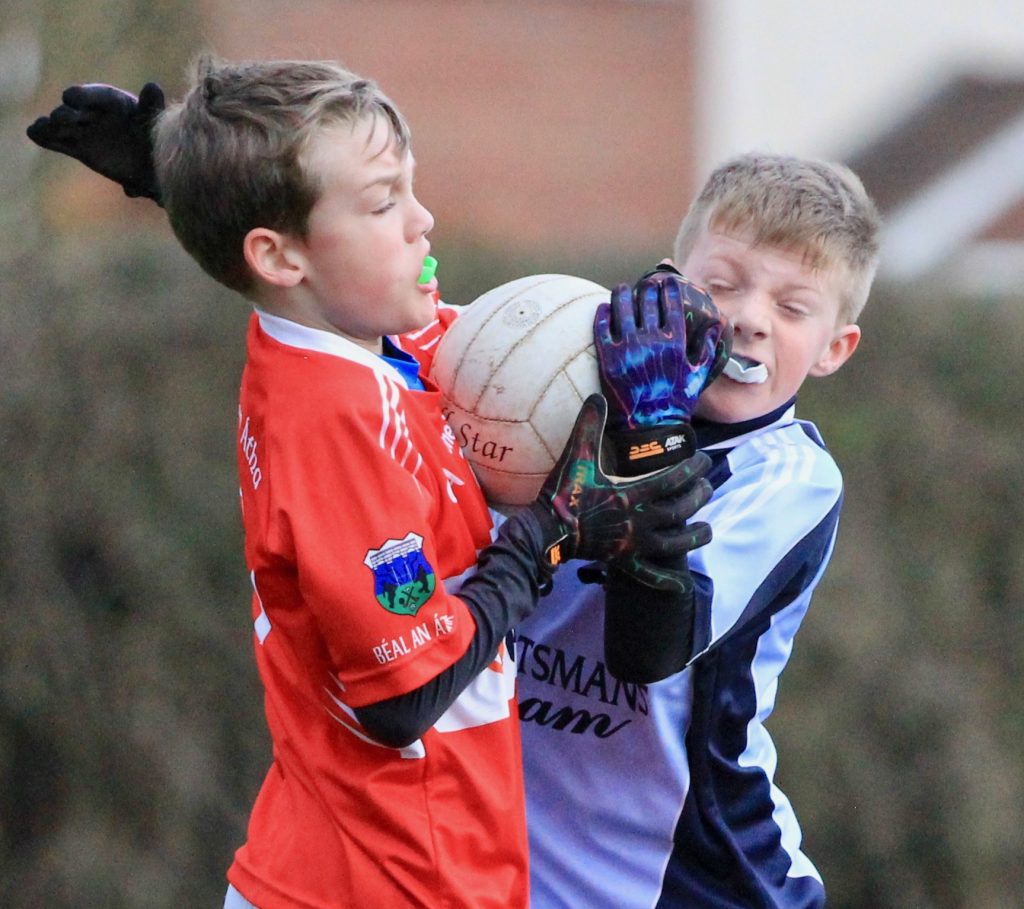 Action from the under-12 football match against Ballina 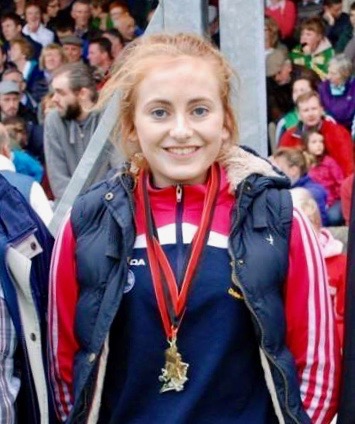 We send our commiserations to Sinéad Meagher who was beaten by Caitríona Mullane (Clare)  in a tie-breaker in the 19 & under Irish Nationals in Kingscourt over the weekend. Sinéad played a fantastic match and once again has represented Nenagh Handball Club with pride and distinction. 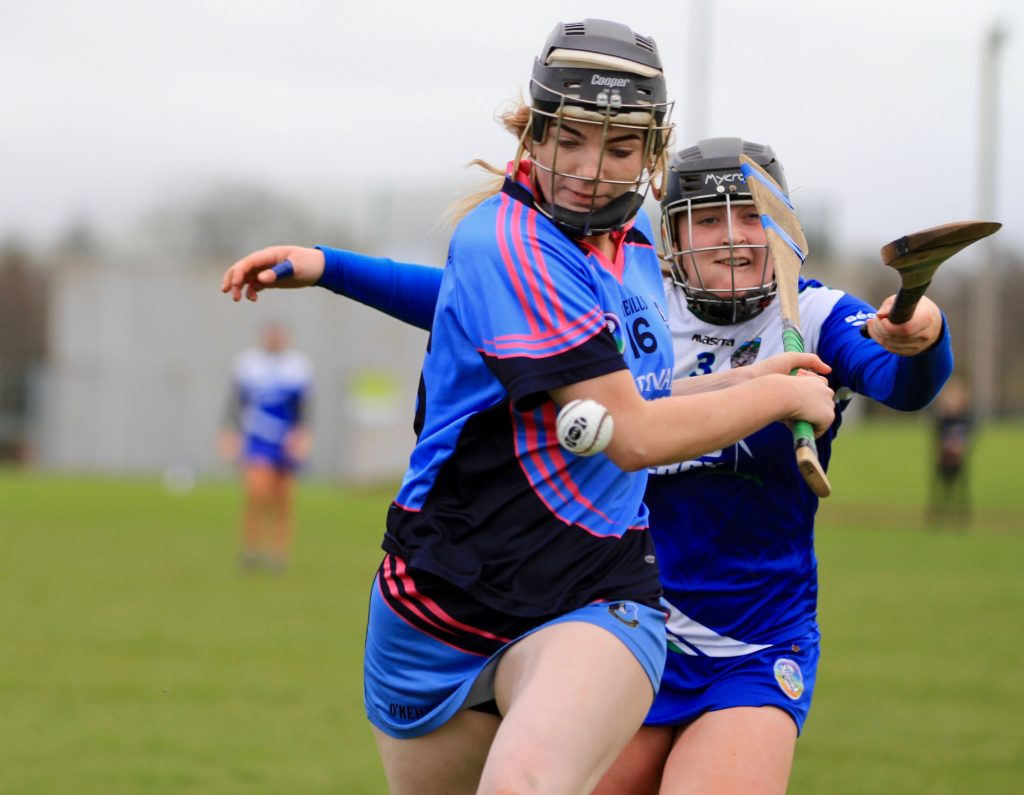 Ella Carey advances on goal during today’s game against Silvermines

Our senior camogie side played their first league game of the year today when they took on last year’s intermediate champions in Dolla and what a fantastic game it was with Éire Óg just about getting their noses in front approaching full-time thanks to a superb Megan Grace goal. Grace O’ Brien scored Nenagh’s opening goal early on and this was followed just before the break with a goal from a ground shot by Lucy Spain, Indeed we send our best wishes to Lucy who picked on an injury late on.

The club are running their social night on May 11th in the Hibernian Inn Nenagh. We will be holding our Come Dine With Me event with a special guest chef on the night. We will also be presenting awards for our players who were on the successful junior-B, junior-A and intermediate county winning teams. We will also be giving a special merit award to one of the pioneers of the club. Tickets for the event are great value with one ticket at 20 euros and three tickets for 50 euros. This gets you a two course meal, a glass of wine and entertainment provided by the wonderful Dufrane band from Kiladangan . It has proven to be a very popular night out in the past so tickets will sell out fast. Please contact any of the committee members for tickets .

Training is moving outdoors to Thursday evenings from 6pm to 7pm at MacDonagh Park. We would like to thank St Mary’s School for the use of their wonderful facilities during the prolonged winter.

Our community games team travelled to Roscrea on Friday evening to take on St Cronin’s and came away losing against a very strong side but with some great displays of skill.

Our senior team set the trend on Sunday in Dolla when they led the way for the senior boys with a great win against newly promoted Silvermines in the county league . The Nenagh team showed great determination and fitness levels to overtake the ‘Mines team who had led for most of the game in the final quarter. The management team of Conor Ryan, Daryl Tucker, Liz Duggan and Michael McNamara can be happy that their charges fought to the end of a thrilling encounter. In fact the whole panel had a say on the outcome with the substitutes having a big say in the result. Result Silvermines 2-7 Nenagh Éire Óg 3-6

Please check club social media pages for up to date changes to fixtures.

Our senior camogie side prior to today’s game in Dolla