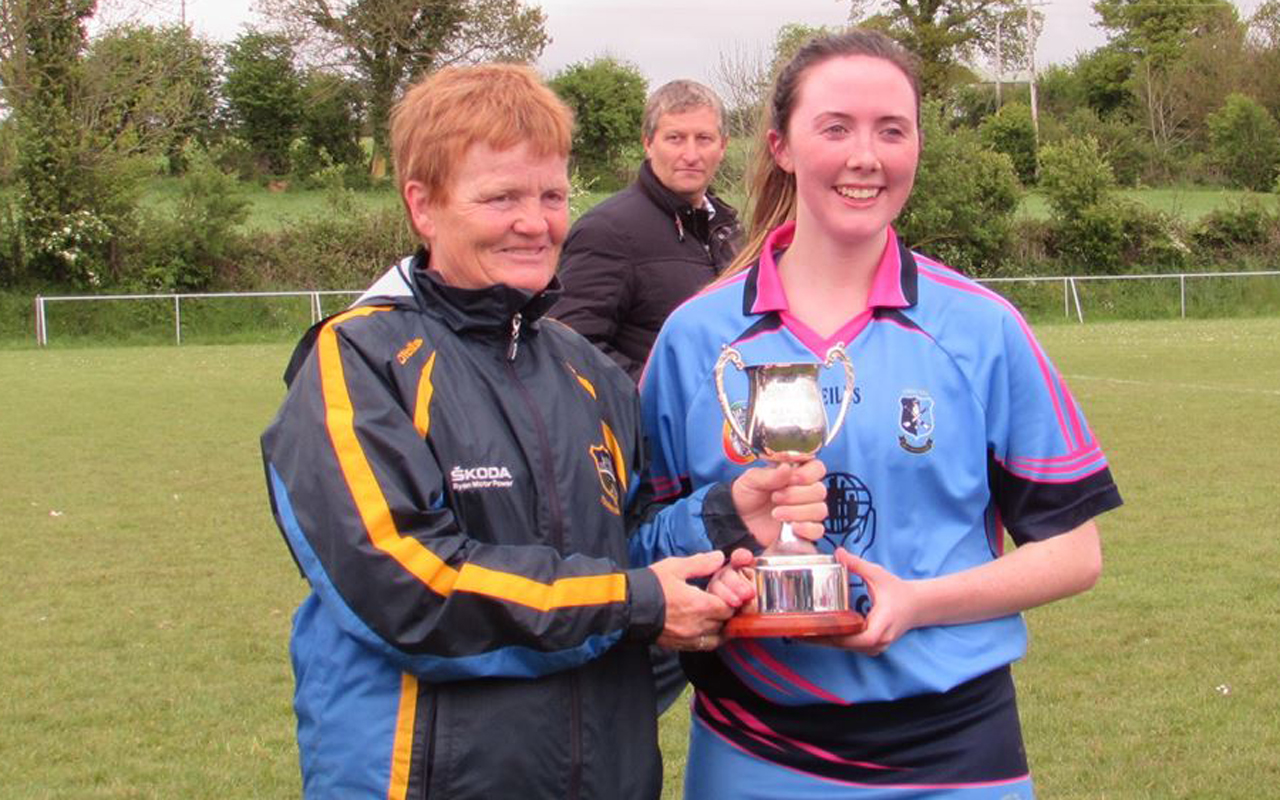 Nenagh Éire Óg captured the club’s very first league title at the junior A grade on Sunday last in The Camogie Grounds after a spectacular game against a very determined and skilful Thurles Sarsfield side. 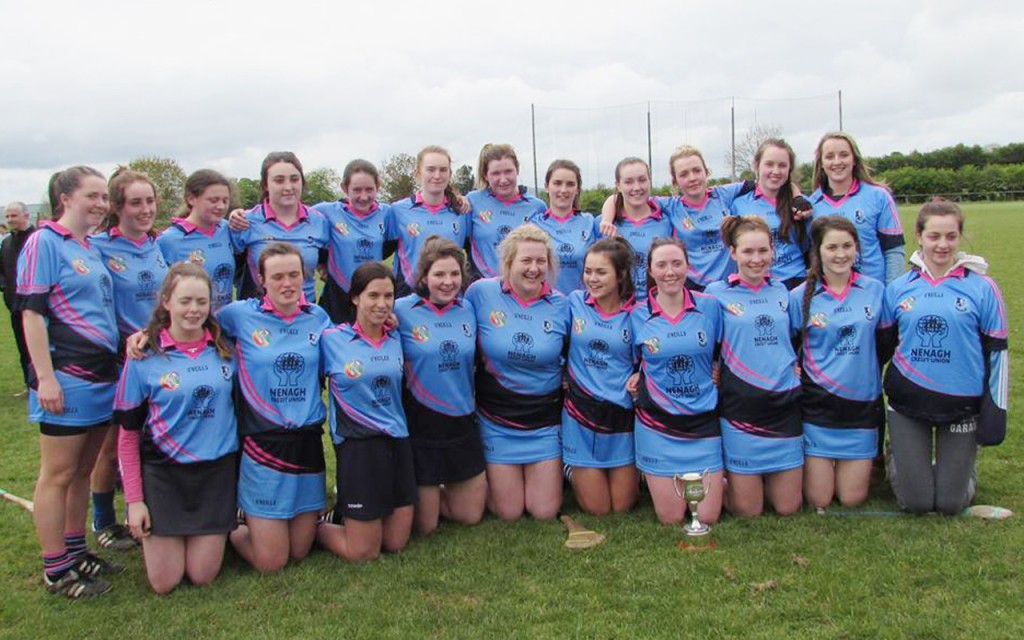 It was a game that had everything that was great about the ancient craft, two committed teams playing a hard but sporting match in blustery conditions. The large crowd who turned up was treated to an extraordinary game that took two further periods of extra time to separate these two fantastic sides.

Thurles started the brighter and within ten minutes had four points on the board compared to just one for Nenagh, a Grace O’Brien free after she was fouled. At this stage it looked as if it might be a long afternoon for the Blues, but to their credit they rallied and scored 1-1 to give them a slender advantage. Firstly Rachel Spillane pointed following a great delivery from the tireless Michelle Collins and then Alicia Hallinan spotted Aislinn O’Brien alone in the box. O’Brien was quickly closed down, but following a chop referee John Lillis held his arms wide to award Nenagh a penalty. Up stepped Grace O’Brien to blast the shot to the goalkeeper’s right and give the three Thurles girls on the line no chance.

It was a lifeline Nenagh badly needed and despite a quick Thurles point Éire Óg went on to score three more to increase the lead to 1-5 to 0-5. Firstly Grace O’Brien latched onto a breaking ball from Louise Hickey to point and this was followed up with two more from placed balls by the same player.

In the 27th minute the excellent Aileen Duggan, playing wing-back, drove forward and found Alicia Hallinan forty yards from goal. Hallinan put the head down and soloed through the heart of the Sarsfield’s defence before unleashing an unstoppable drive to the roof of the net. With their tails up Nenagh continued their scoring spree and after great work from Holly O’Brien the hard-working Rachel Spillane scored a beautiful point to leave the half-time score Nenagh 2-6 Thurles 0-5.

The Thurles girls come a town steeped in hurling history and were not about to lie down. They began the second half in determined fashion with two quick points before Alanna Morris, who had a fine afternoon, collected the ball fifty yards out and split the posts from out on the sideline.

Thurles responded in kind before Louise Hickey was fouled and Nenagh were awarded their second penalty of the game. This time Grace opted to point.

Sarsfields again upped their game and rattled off three unanswered points. The crowd sensed that we were in for a spectacular second half and the players did not disappoint.

Aileen Duggan found Alicia Hallinan in space and from an acute angle she popped over to stem the Thurles tide. Shortly after Rachel Spillane found Grace O’Brien who duly pointed to leave proceedings at 2-10 to 0-10.

Grace O’Brien traded points with Thurles following a foul on Louise Hickey before Sarsfields scored another unanswered hat-trick of points.

After a high ball broke in the penalty area Thurles pounced for the equalising goal in the 55th minute. Moments later Maeve Coffey thought she had scored a three pointer of her own with a hand-passed effort which was spectacularly saved by the Thurles netminder. The rebound broke to Grace O’Brien who pointed to give Éire Óg a slender advantage heading into injury time. However the mid girls were not finished yet and managed to level before full-time to level proceedings – 2-12 to 1-15.

Extra-time continued in the same frantic and spectacular vein. Early on Maeve Coffey was fouled and Grace O’Brien duly converted the free before Thurles took the lead with two points of their own. One of these Sarsfield’s scores was the result of a fine save from Sarah Quigley who deflected the shot over the bar.

O’Brien scored another free to level the sides and then Éire Óg took a lead they would not relent through the impact sub Maeve Coffey.

Thurles’ exertions in getting back into the match in normal time was beginning to catch up with them and the fitness levels of the Nenagh ladies was a testament to the diligent hard work of coaches Kieran O’Brien and Noel Coffey.

There was time for one more spectacular save at the conclusion of the first half when the Thurles goalkeeper dived full length to block a superb Rachel Spillane pull and Alicia Hallinan batted the rebound agonisingly wide.

Grace O’Brien pointed another free at the beginning of the second half of extra-time and it was the boost Éire Óg needed. From here on in they worked like beavers to ensure the title would be going to the Upper Ormond for the first time.

Maeve Coffey added another point and the forwards worked furiously to prevent any Thurles excursions into the Nenagh half.

Rachel Spillane played a lovely ball to Michelle Collins who in turn found Grace O’Brien who opened the lead to four points which resulted in the loudest cheer of the day from the large Nenagh following which almost lifted the roof off the stand.

The Blues sensed victory and were not about to relinquish their lead. Thurles poured forward and looked as if they were about to goal until Sarah Quigley showed why she is one of the best up-and-coming goalkeepers in the county and was equal to the effort. Thurles were subsequently awarded a ’21 which, again, was brilliantly saved by Quigley. This wasn’t the only time she matched a serious challenge from the Thurles ladies. Late in the second half of normal she produced one of the greatest saves ever witnessed in The Ragg when somehow she blocked from point blank range.

Every single Nenagh player deserves tremendous praise for the way they went about their business. When called upon Sarah Quigley produced the goods while the six backs harried and harassed their opponents all day. The midfield duo of Michelle Collins and captain Ciara McGrath ran themselves into the ground while the forwards deserve a lot of credit for the way they defended. The Thurles backs were under constant pressure and were not allowed any easy clearances. Grace O’Brien was impeccable from the frees and if Lorrha-Dorrha have Patrick ‘Bonnar’ Maher, Nenagh have Aislinn O’Brien who’s work rate was relentless and she selflessly spreaded the ball around for the other forwards.

There were numerous players from both sides who made strong claims for the player of the match accolade, but one player who stood out was Rachel Spillane. She scored two fine points, set up more opportunities for her team mates and was the hardest working player on display.

Nenagh’s win was all the more impressive when you take into account that Julie Moylan and Zoey Gratton were ruled out through injury. Added to that Sarah O’Connor, Hazel Coffey and Emer Ryan, who played significant roles in getting the team to the final, did not make the starting team.

Youngsters Leah Sheedy and Ruth Hassett also played their part when introduced as second half substitutes.

Both teams can now look forward to the championship with a lot of confidence and will go close to winning championship honours.

To watch the after-match celebrations and the presentation of the cup to captain Ciara McGrath by Marian Harkin (Chairperson of the County Camogie Board please click the video below.

A huge number of photographs were also taken on the day – just click here. 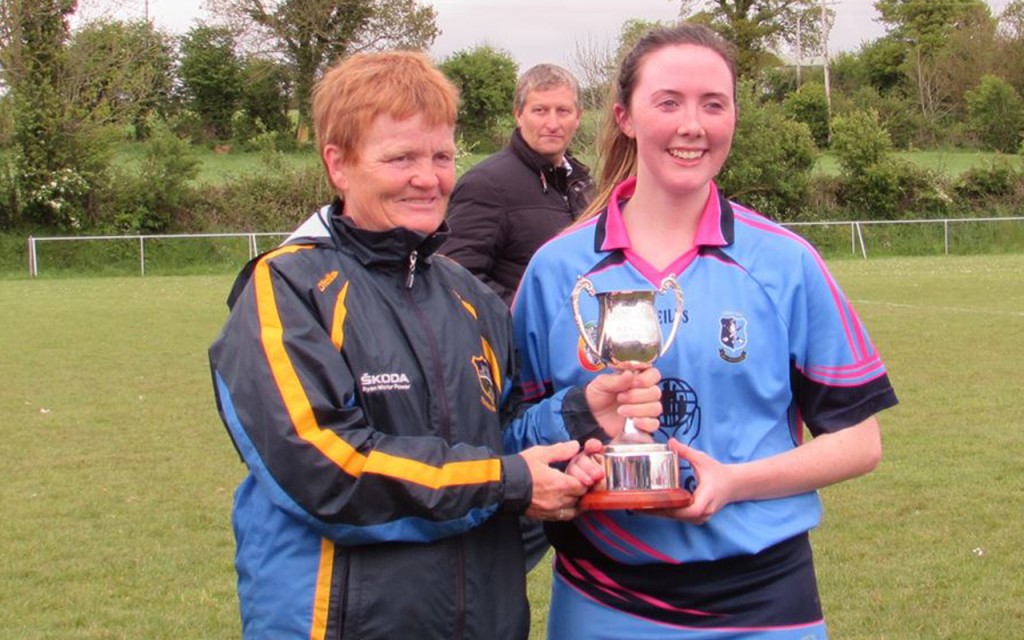