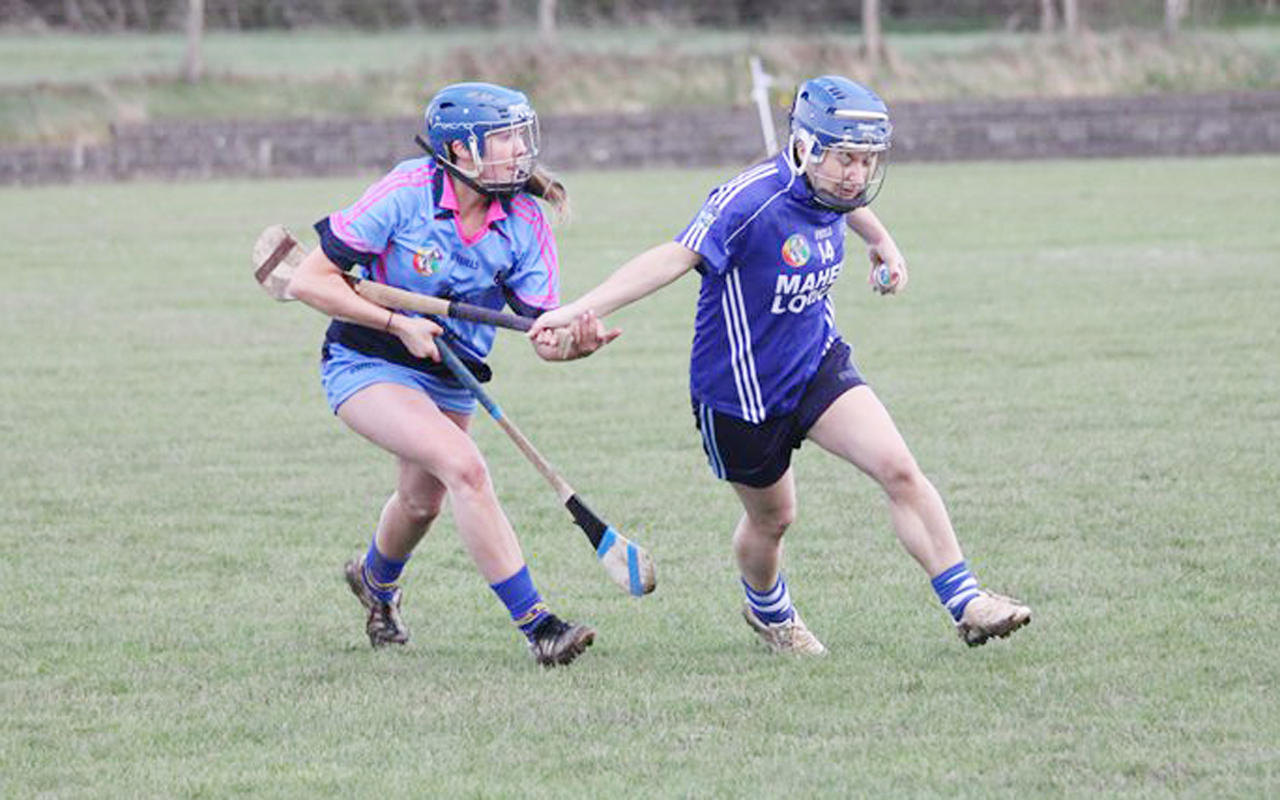 Nenagh Éire Óg travelled to Lorrha to take on the hosts in the third round of the junior A league and it took a superb injury time save from stand in goalkeeper Holly O Brien to ensure that we emerged from this highly entertaining encounter with a slender two point victory.

Both sides entered the game full of confidence having won their respective two opening round matches however Nenagh were down four players – Rachel Maher, Grace O’Brien, Sarah Quigley and Maeve Coffey – due to inter-county commitments.

This was a hugely entertaining match incorporating all that is great about Camogie with tremendous grit, determination and no end of skill on display from two hugely committed teams.

The game started in a whirlwind with Nenagh’s captain Ciara McGrath landing a fine point from forty yards. Lorrha responded with a superb goal of their own, which left Holly O’Brien (standing in for the absent Sarah Quigley), with no chance. Nenagh remained focused and centre-forward Aislinn O’Brien opened her account after some fine interplay with Ciara McGrath. McGrath, herself, levelled proceedings with a point of her own in the seventh minute.

Things started to settle down and it wasn’t until the 16th minute when the next score came – a point from full-forward Sarah O’Connor after a fine pass from Aileen Duggan. Seconds later Alicia Hallinan sent a bullet to the roof of the Lorrha net. It was all Éire Óg at this stage and Louise Hickey forced a superb save before Hazel Coffey coolly pointed the rebound.

Just as it looked as if Nenagh were going to take full control of this game Lorrha responded in kind with a great goal and two points of their own. Ciara McGrath pointed a free just before Alicia Hallinan bagged her second goal of the game, this time a great low shot after playing a one-two with Aislinn O’Brien. Lorrha pointed themselves to leave the score at the interval Lorrha Dorrha 2-3 Nenagh Éire Óg 2-6.

Lorrha started the second half brightly with a point inside three minutes before Hazel Coffey was picked out with a fantastic pass from Aislinn O’Brien. Coffey ran twenty yards before unleashing a rocket which gave the goalkeeper no chance. Nenagh found the net again a minute later after an Aileen Duggan long-range free deceived all and landed in the goal.

Lorrha, to their absolute credit, did not drop the heads and scored 1-3 of their own with only an Aileen Duggan pointed free breaking their momentum. Entering the closing minutes there was only two points separating the sides when Michelle Collins got the point of the game. Referee Joe Cahill threw in the ball and after a scramble Collins emerged with the ball and under severe pressure from the backs shot over her shoulder from a difficult angle to leave a goal between the teams.

Lorrha piled on the pressure in the final moments and scored a point. Our backs were under unbelievable pressure and deep in injury time it appeared as if Lorrha were going to snatch a late winner when a shot from the fourteen-yard line was heading into the lower corner of the Éire Óg net, but Holly O’Brien was equal to it and made a fine save – once upon a time her father Kieran would have been very proud of that stop.

Both sets of management will be delighted with the performance their charges gave. Their teams battled right to the end and can look forward to the remainder of the league with lots of confidence. It should be pointed out that Ciara McGrath more than played a captain’s role as the previous night she celebrated her 21st birthday and spared no energy covering a lot of ground in this game. Well done Ciara.