‘A Central Culture – Gaelic Sport in Nenagh’ now on sale!

GAA President Liam O’Neill launched the first two volumes of the book ‘A Central Culture – Gaelic Sport in Nenagh’ at the MacDonagh Park complex on Sunday afternoon. This terrific piece of work has been compiled by Dónal A Murphy, PJ Maxwell and Nancy Murphy and is now on sale for a combined price of €40 (both volumes). 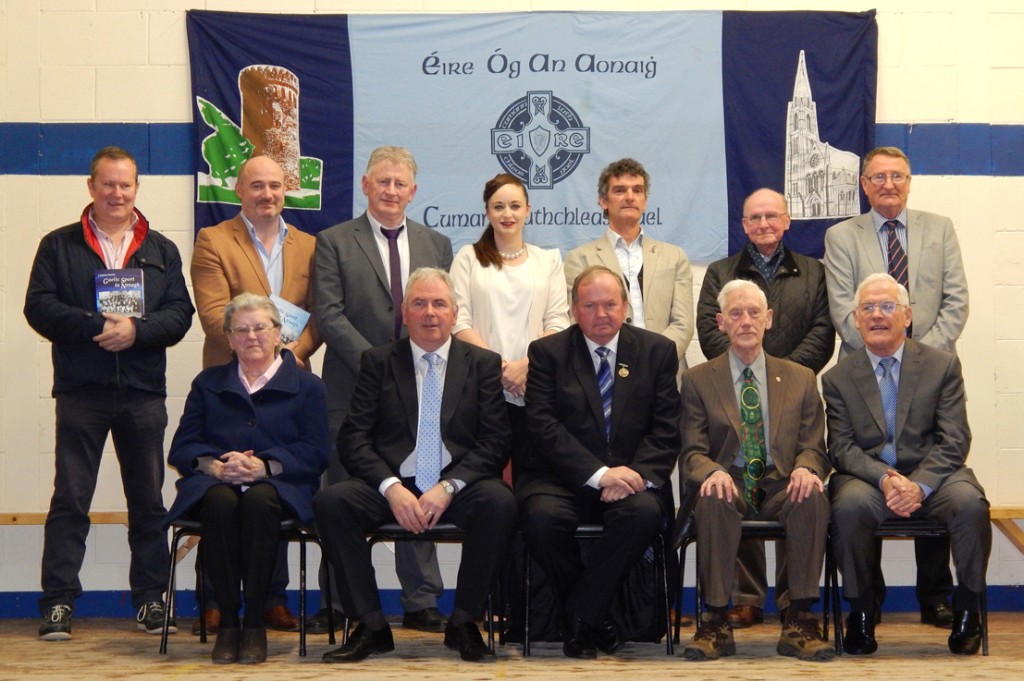 Speaking at the launch Nenagh Éire Óg club chairman Jim Nagle warmly welcomed the large crowd, GAA President Liam O’Neill and also took time to acknowledge the presence of representatives of the North Board, County Board and neighbouring clubs in the MacDonagh Park Complex.

Authors Dónal and Nancy Murphy regaled the audience with a presentations of highlights from this definitive social history of Gaelic sport in Nenagh while the evening’s entertainment also featured the singing of Gerry O’Brien and Jenny Bracken’s reading of the Thomas MacDonagh poem ‘John, John’ – Jenny Bracken is a great granddaughter of Con Cleary who was a significant influence on the development of the Nenagh Éire Óg club.

In a well-received address club Jim Nagle outlined the scale of the project undertaken by Dónal A Murphy, PJ Maxwell and Nancy Murphy.

“If something is worth doing in life it is worth doing right,” Jim Nagle said before revealing that the book ‘A Central Culture – Gaelic Sport in Nenagh’ represented much more than a “mere club history”. Instead, the book examines the social and cultural fabric of Gaelic games over a 130-year period in the town.

Jim Nagle thanked the LEADER project for their help and support, financial or otherwise, and particularly Seán Crowley who made a significant contribution to ‘A Central Culture – Gaelic Sport in Nenagh’. Mr Nagle also thanked the printers, the Nenagh Guardian, for all of their assistance before describing the book as a “remarkable publication” which blends history and memoir.

Nancy Murphy made a presentation of the book to Liam O’Neill before the GAA President described ‘A Central Culture – Gaelic Sport in Nenagh’ as “worthy of great praise”. Mr O’Neill also asked those present to “never forget what makes us strong, what makes us strong is community”.

“I am delighted to be here and I hope this history inspires the coming generations to take the Nenagh club to even greater heights,” Liam O’Neill added.

In conclusion club chairman Jim Nagle thanked the GAA president for his kind remarks, described the book as a “collector’s item” and dedicated it to every player, mentor, administrator and supporter of Nenagh Éire Óg.

Mr Nagle thanked Dónal A Murphy, PJ Maxwell and Nancy Murphy for their work on this ambitious project before asking Ger Gavin to make a presentation to Liam O’Neill on behalf of the club – Ger Gavin, as club chairman in 2006, instigated this project which has now come to fruition. 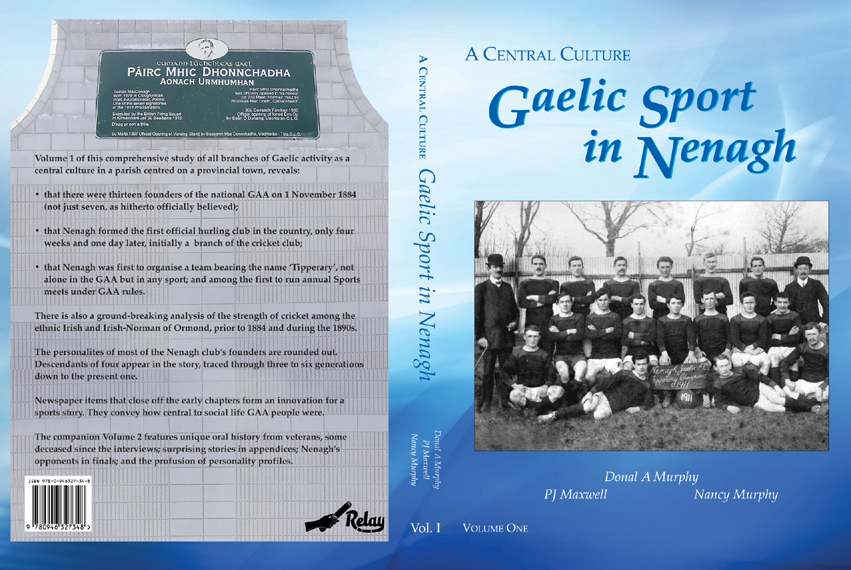 The cover of volume one of ‘A Central Culture – Gaelic Sport in Nenagh’.

In all ‘A Central Culture – Gaelic Sport in Nenagh’ will comprise three volumes – volume one covers the years 1884-1933, volume two 1934-1959 and volume three 1960-2014. GAA President Liam O’Neill launched the first two volumes of the book on Sunday while the third volume will be published in 2015.

Volumes one and two cover the first seventy-five years (1884 to 1959). Researched and written by Dónal A Murphy, PJ Maxwell and Nancy Murphy, with Gaelic sport as the focus and Nenagh town and parish at centre stage, this story explores many aspects of social history. People and place, sport and identity are at the heart of a publication which contains much to fascinate and intrigue a wide audience.

This publication will surely find a resting place in every home in Nenagh and the surrounding area. It will cater for all Tipperary GAA fans and will also appeal to national sporting enthusiasts and members of local historical societies and family historians.

Along with the physical book a huge amount of digital content associated with the project will be published via the club website in 2015. That digital content will include: photographs, a detailed listing of every player on every team at every level in every code to have played for Nenagh Éire Óg from 1960 onwards, a listing of every match played during that period and a copy of every reference to Nenagh Éire Óg contained in the Nenagh Guardian files.

Volume one of this fantastic and comprehensive study of all branches of Gaelic activity in Nenagh will reveal some notable facts:-

1) that there were thirteen founders of the national GAA on November 1st 1884 (not just seven, as hitherto officially believed)

2) that Nenagh formed the first official hurling club in the country, only four weeks and one day later, initially a branch of the cricket club

3) that Nenagh was first to organise a team bearing the name ‘Tipperary’, not alone in the GAA but in any sport; and among the first to run annual Sports meets under GAA rules.

The book will also include a ground-breaking analysis of the strength of cricket among the ethnic Irish and Irish-Norman of Ormond, prior to 1884 and during the 1890s.

The personalities of most of the Nenagh club’s founders are rounded out in the book – descendants of four appear in the story and are traced through three to six generations down to the present one. 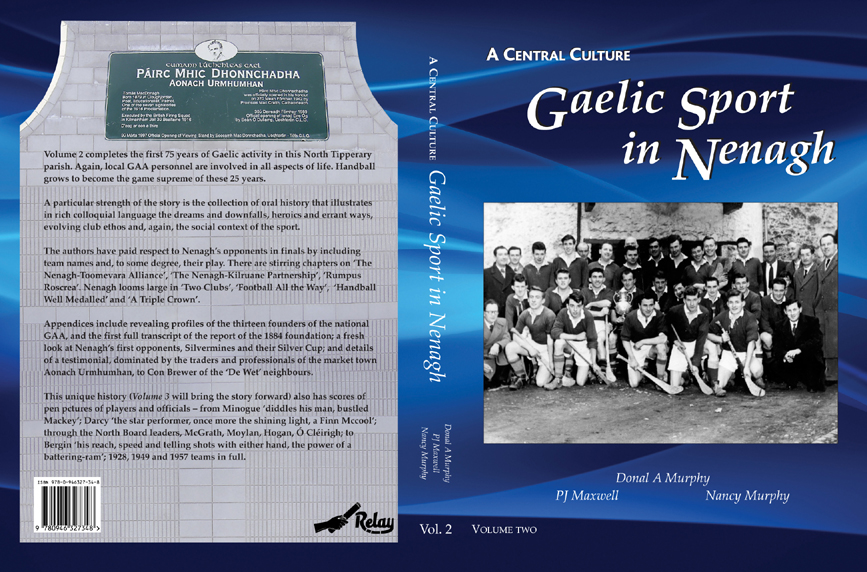 The cover of volume two of ‘A Central Culture – Gaelic Sport in Nenagh’.

Volume two features a unique oral history of Gaelic sports in Nenagh as told by several veterans, some deceased since the interviews; surprising stories in appendices; Nenagh’s opponents in finals and the profusion of personality profiles.

A particular strength of the story is the collection of oral history which illustrate in rich colloquial language the dreams and downfalls, heroics and errant ways, evolving club ethos and, again, the social context of the sport.

Appendices include revealing profiles of the thirteen founders of the national GAA, and the first full transcript of the report of the 1884 foundation; a fresh look at Nenagh’s first opponents, Silvermines and their Silver Cup; and details of a testimonial, dominated by the traders and professionals of the market town Aonach Urmhumhan, to Con Brewer of the ‘De Wet’ neighbours.

This unique history also features scores of pen pictures of players and officials – from Minogue ‘diddles his man, bustled Mackey’; Darcy ‘the star performer, once more the shining light, a Finn Mccool’; through the North Board leaders, McGrath, Moylan, Hogan, Ó Cléirigh; to Bergin ‘his reach, speed and telling shots with either hand, the power of a battering-ram’; 1928, 1949 and 1957 teams in full. 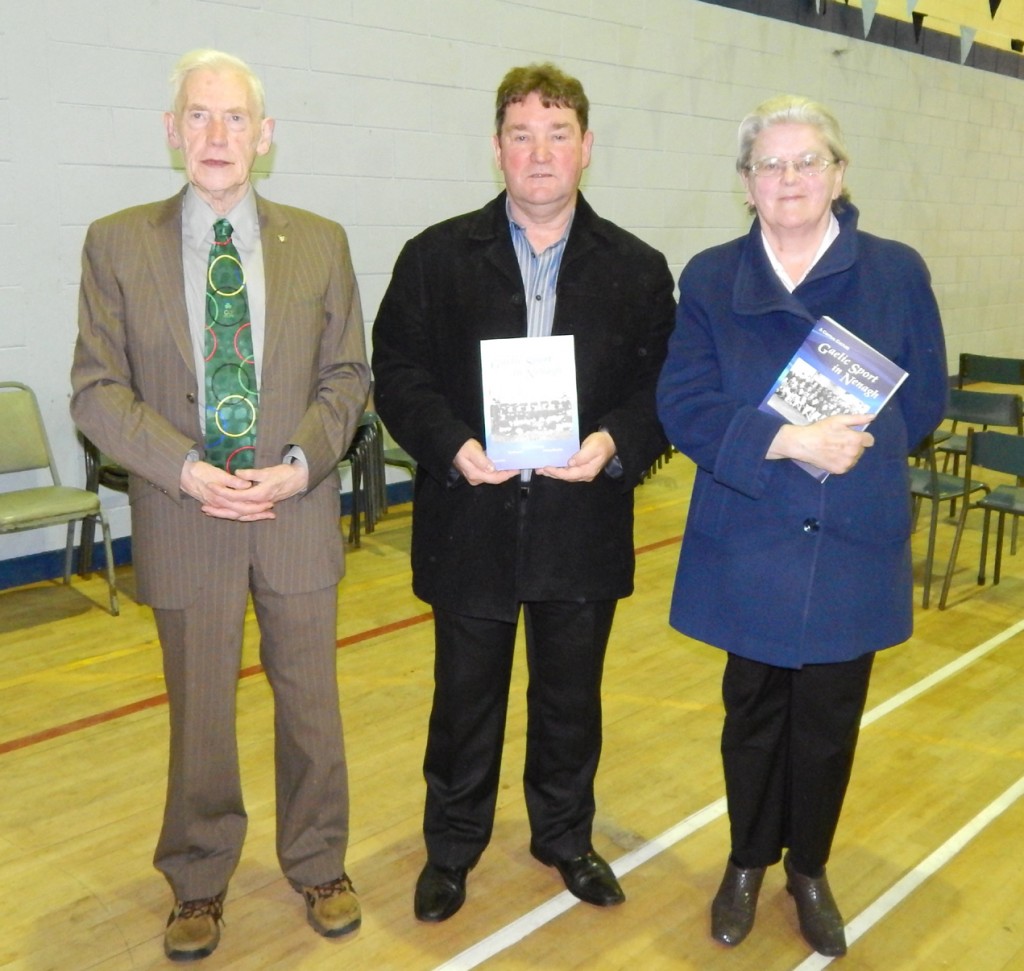 The authors of ‘A Central Culture – Gaelic Sport in Nenagh’ – from left: Dónal A Murphy, PJ Maxwell and Nancy Murphy.

The first two volumes of ‘A Central Culture – Gaelic Sport in Nenagh’ are now on sale at just €40. Copies of the book can be obtained in selected local shops and from officers of the club. Those interested can also purchase a copy via the club website. Please contact PRO Brian McDonnell on 087 222 8976 or simply email Brian at bmcdonne@eircom.net – Nenagh Éire Óg are also prepared to post copies of the book to anywhere in the world. Please contact Brian McDonnell for details.