Following a win over Borris-Ileigh in the league final the Nenagh Éire Óg junior A hurlers will now hope to successfully defend their north Tipperary junior A hurling championship title.

Nenagh Éire Óg battled their way to a two-point win over a determined Borris-Ileigh side at Dolla on Sunday evening in the north Tipperary junior A hurling league final.

Having played with the aid of a stiff breeze in the opening half Éire Óg led 0-8 to 0-3 at the break, but dug in superbly late in the second half when Borris-Ileigh closed the gap to two points. Indeed, Éire Óg were very good value for this win with captain Eoin Fitzgibbon collecting the league trophy for the third successive year. 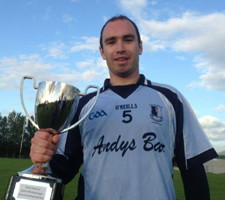 In the 24th minute Bob O’Brien was denied a certain goal by a superb save from the Borris-Ileigh ‘keeper. Éire Óg closed out the opening half with points from Gary Howard and Andrew Coffey to lead 0-8 to 0-3 at the break.

Two quick Borris-Ileigh points immediately after the interval closed the gap significantly before a David Hackett free settled Éire Óg in the 34th minute – 0-9 to 0-5.

A Borris-Ileigh point reduced the Blues’ lead to three points, but Éire Óg responded with two David Hackett frees to lead 0-11 to 0-6 with eighteen minutes to play.

Two Borris-Ileigh frees cut the Éire Óg lead significantly before an Andrew Coffey flick in the 47th minute bounced agonisingly wide of the Borris-Ileigh goal. A minute later Donnacha Quinn scored a vital point for Éire Óg before two Borris-Ileigh points closed the gap to a very manageable two points (0-12 to 0-10) with four minutes to play.

Éire Óg stood their ground manfully in the closing minutes with a late David Hackett effort from play forcing the Blues into a three-point lead. Borris-Ileigh did manage another point, but the Éire Óg defence refused to cough up a late goal-scoring opportunity.

Nenagh Éire Óg would like to thank all the players for their efforts during the campaign. Credit for this win also goes to the management team which consists of Martin Morris, Michael Ryan and Christy McLoughlin.

The junior A hurlers will now hope to successfully defend their north Tipperary junior A hurling title. In the championship Éire Óg have been drawn in group two alongside Toomevara, Roscrea, Kilruane MacDonagh’s and Moneygall. Group one features Borris-Ileigh, Kildangan, Knockshegowna, Lorrha and Burgess. The group winners will progress to the semi-finals while the second and third-placed teams will go through to the quarter-finals.

Referee: Anthony Sherlock (Kildangan).
[hr]
If you need to contact Éire Óg please do so via our Contact page. You can also keep in touch by accessing our Facebook page or by following @nenagheireog on Twitter. We would also ask you to consider supporting Éire Óg by entering the club lotto and by paying your club membership.