Your guide to all the comings and goings at MacDonagh Park this week! 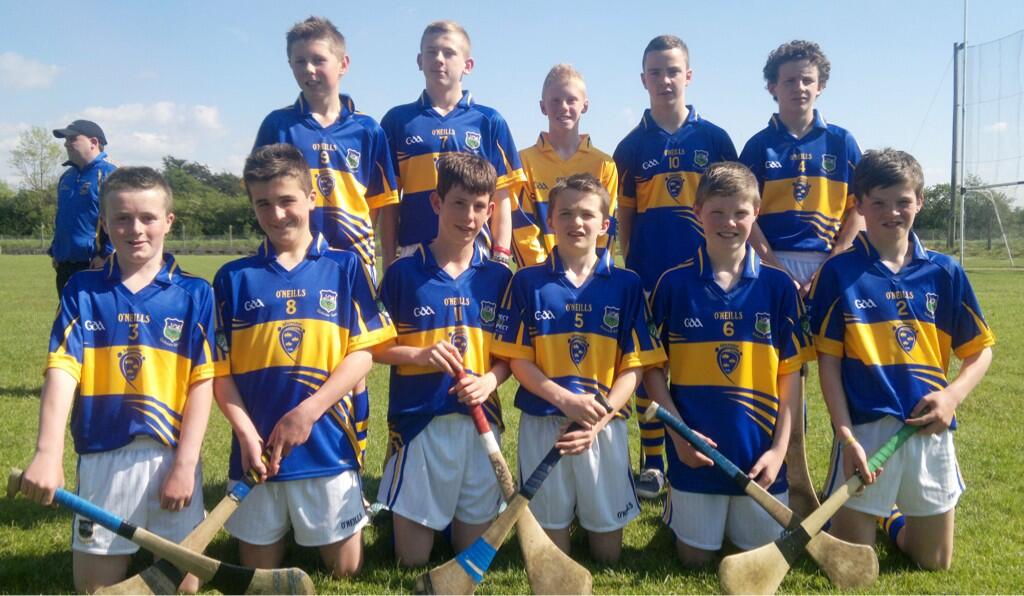 Congratulations to Nenagh Éire Óg’s Barry Coffey (front, second from left) who has been selected to play in the Primary Game against Limerick at Páirc na nGael, Limerick on Sunday, June 9th.

Senior: Last Thursday night the draw took place for the first round of the county senior hurling championship. Éire Óg have been drawn against Thurles Sarsfields with the game scheduled to take place on June 15th-16th. On Sunday afternoon last we defeated Kilruane MacDonagh’s in the Dr Fogarty Cup semi-final (County Senior Hurling Challenge Cup) – 2-22 to 2-17 in Cloughjordan. Éire Óg now face Burgess in the final – in their respective semi-final Burgess beat Clonoulty-Rossmore 2-17 to 1-11.

Junior A: On Saturday evening last our junior A hurlers defeated Roscrea in the last group game of the league. The final score was: Éire Óg 2-25 Roscrea 0-16. This win has qualified Éire Óg for the knock-out stages of the league. Éire Óg face Burgess in the junior A league semi-final in Cloughjordan on Saturday, June 8th (7pm).

Junior B: Our junior B team conclude their league campaign this Thursday evening when they take on Borrisokane. This game takes place in Borrisokane at 7.30pm.

Inter-county: Best wishes to Michael Heffernan and the Tipperary panel against Limerick on Sunday in the Gaelic Grounds.

County Board Draw: Congratulations to Deirdre Lowney on winning a car in the first draw on Friday night last which took place in Templemore. Thanks to all the promoters and supporters of this year’s County Board Draw.
[hr]
JUVENILE

Under-10 & Community Games: Our Community Games team lost out to Roscrea on Wednesday last in the North-Mid final in Nenagh. Well done to these lovely young hurlers for getting this far in the competition and good luck to Roscrea as they progress.

Under-12 Go Games: Our group one hurlers got their campaign off to a start with a victory over Borrisokane on Friday last. In an exciting game Dylan Murphy made a number of excellent saves in goal while Barry Coffey & Cian Griffin got the Éire Óg goals. Our group four team came from behind to snatch a late draw in the first round game against Templederry. There were fine performances from Cameron Spillane & Cian Galvin while Dylan Noonan-Kelly & Adam Ryan scored the two goals. Both teams were due to play Silvermines in the next round on Bank Holiday Monday.

Under-14 Football: Our under-14s won the North Tipperary football title on Monday, May 27th. The team was led by captain Peter Folan and recorded a 3-8 to 1-2 victory over Borrisokane. Congratulations to Peter and the team on a fantastic victory. On Saturday last the team contested the county semi-final against Galtee Rovers which they narrowly lost on a scoreline of 5-5 to 4-5. The team showed great fight and determination to claw back a seven-point deficit at half time. Jake Morris struck three goals in the second half and the score was level with five minutes to go. Unfortunately the team couldn’t get ahead and suffered a narrow defeat following a brave performance. Attention now turns to the hurling championship and full attendance is required at training on Monday and Fridays. A challenge match will take place against Patrickswell on Wednesday. Full attendance required.

Under-16: Preparations are underway for the hurling championship. Full attendance at all training sessions is required.

Guess the Score: The juvenile club are running a ‘Guess the Score’ competition for the Tipperary v Limerick match which the boys are selling at €2 a line. Please support the players.

Congratulations: Congratulations to Éire Óg’s Barry Coffey who has been selected to play in the Primary Game against Limerick at Páirc na nGael on Sunday, June 9th.
[hr]
CAMOGIE

Junior: Our juniors played Newport on Monday in the opening round of the Munster League. Check Facebook for the result of this fixture. Éire Óg are also due to play Burgess, Valley Rovers (Cork) and Wolfe Tones (Clare).

Civic Reception: On Friday last Nenagh Town Council recognised the club’s achievements last year and awarded us a civic reception where we were presented with a framed certificate. We wish to thank the council for their kindness and the wonderful refreshments provided on the night.

Come Dine With Me: On Friday last over one hundred people attended our ‘Come Dine With Me’ fundraiser in the Hibernian Inn with celebratory guest on the night being former Munster, Leinster and Irish rugby player Trevor Hogan. We wish to thank everyone who helped out on the night including DJ Mickey Mac, the staff of the Hibernian Inn and Trevor Hogan for so generously volunteering his time.