Season’s greetings to all supporters of the Blues – here at Nenagh Éire Óg we are already looking forward to 2014 and hope you are too.

Healthy Club Project: The Healthy Club Project team will host a ‘Well Being and Mental Health’ night on Friday, January 24th at the Abbey Court Hotel. This event represents an opportunity for club members and the wider community to become informed on the many issues surrounding depression and mental health. Nenagh Éire Óg hope to create awareness and offer hope in the areas of depression, loneliness and isolation. Speakers on the night include Conor Cusack, Tony Butler and Séamus Hennessy. In addition a number of organisations will be present with information.

National Club Draw: We are thrilled to announce that Nenagh Éire Óg will be participating in the national club draw which features some sensational prizes – tickets are priced at €10 and available from any officer of the club or committee member. Please support this fantastic initiative! 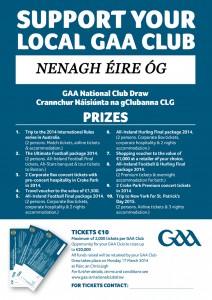 Seventh: Shopping voucher to the value of €1,000 at a retailer of your choice.

Last week’s lotto jackpot of €1,000 was not won. The five €50 lucky dip winners were: Pat O’Connor (Gortlandroe), Shane Brophy (c/o the Guardian), Kevin McCormack (Dunkerrin), Tom McCarthy (Ballymackey) & Tom Nolan (Moneygall). Thanks to all online lotto players for your support. The Nenagh Éire Óg Club Lotto represents the club’s key fundraising initiative. Please consider supporting the Blues by playing our club lotto online: click here! Alternatively you can also support Nenagh Éire Óg by paying your club membership. Membership for 2014 is now due and can be paid to any club officer or online. The cost of membership is priced at €25.

Due to bereavement the juvenile AGM scheduled to take place on December 18th is now deferred until Wednesday, January 8th (8pm) at MacDonagh Park, Nenagh.

Here at Nenagh Éire Óg we are happy to reveal that the community associated with our club is growing all the time. Our Facebook page is growing in ‘reach’ while on Friday our number of followers on Twitter exceeded 1,000 – in December 2011 the @nenagheireog Twitter account had just 48.

The club newsletter, developed by Catherine McTiernan and Enda O’Sullivan, has proven a resounding success while the club website is attracting significant traffic.

From January 1st to November 30th of 2013 www.nenagheireog.com attracted 9,009 unique visitors and 45,487 page views from 56 different countries – 1,259 unique visitors logged on to the site during county final week and 399 different users visited our county final report on Sunday, October 13th while during 2013 50.2% of visitors to the website did so using a mobile phone or tablet.

We are eager to provide supporters of Nenagh Éire Óg with the very best service we can. So, if you have a suggestion or a request with specific regard to our communications strategy or the content you would like to see published via any of the aforementioned channels please let us know.

One of the highlights of 2013 for the men and women of Nenagh Éire Óg was the minor A hurlers placing county titles back-to-back in such unforgettable circumstances. Killian Gleeson, of course, captained this year’s winning team. It was most interesting to note and highlighted brilliantly in the September edition of the club newsletter that Killian’s granduncle, Michael Grey, captained the successful 1947 team which also featured Fr Alec Reid who played such an influential role in the peace process and, sadly, passed away recently. 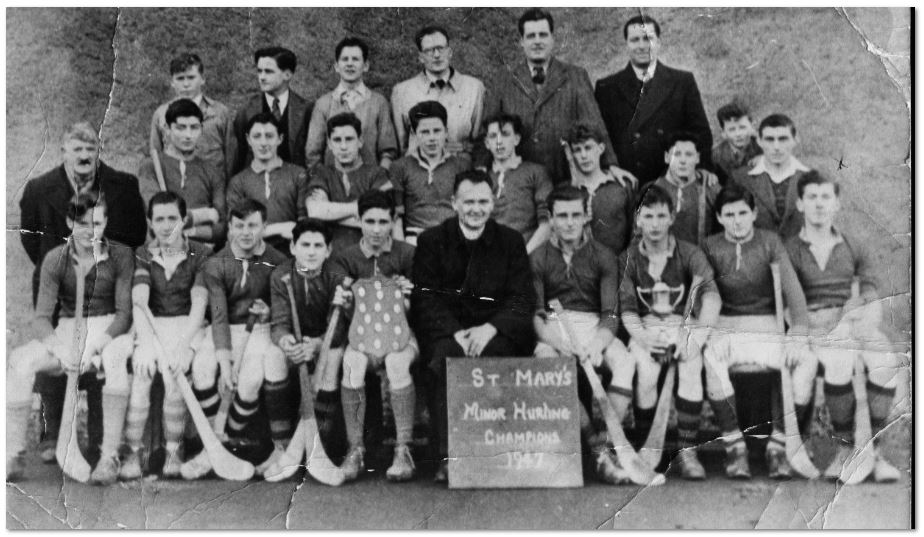 The links between the ’47 team and the 2013 team which made history by capturing a seventh north title in-a-row is extraordinary.

The 1947 team was captained by Michael Grey, a granduncle of 2013 captain Killian Gleeson. Killian’s sister is under-16 Camogie star Saoirse. Shane Hennessy, another member of the current panel, is a grandson of Phil Hennessey while Eddie and Pat Hynes of the 1947 team are granduncles to midfielder Andrew Coffey.

The connections don’t end there however as team physio Eddie Hynes is a nephew of Eddie and Pat while Daire Gleeson is their grandnephew and Mick Hynes is their brother. Also, the O’Brien’s Donie, Kieran, Willie and Noreen (Coffey) are nephews and a niece of Pat and Eddie Hynes.

There are also other connections to well-known figures within the club. Frank Manning who passed away recently is Niall Madden’s and under-14 hurler Alan Manning’s grandfather and Gerry Manning is their grand-uncle. Martin Hogan is also a grandfather to David and John Minogue while Willie Gleeson is related to senior selector Enda Costello.

Michael Grey is father to 2013 under-16 manager Michael Grey (who himself won a north minor medal in 1992) while Denis Grey is his uncle.

Peter Maloney, pictured in the front row is a granduncle to senior hurlers Noel and Hugh Maloney. Peter is living in Australia since the mid-1950s.

With such strong connections to the past and with a club growing stronger all the time we look forward to a successful 2014.

Best wishes to all supporters of the Blues and here’s to a successful 2014.