A big week for the Blues as the Éire Óg senior hurlers countdown to Sunday’s county semi-final and our minor hurlers collect a seventh successive north Tipp title in Cloughjordan. 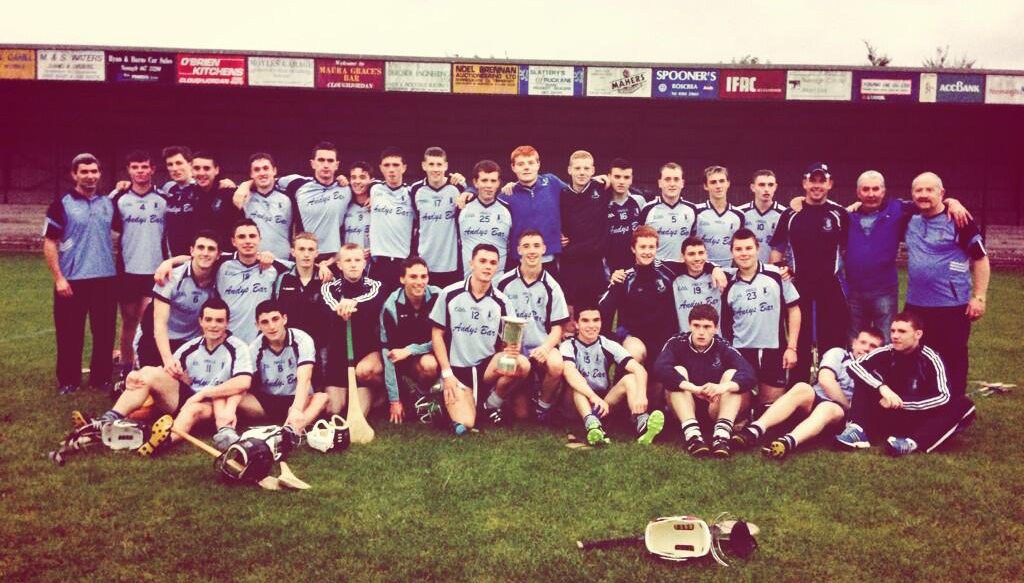 The Nenagh Éire Óg minor panel pictured in the wake of Sunday evening’s frantic final played at Cloughjordan – our thanks go to Caoimhe Geaney for this terrific photo!

Senior: The Nenagh Éire Óg senior hurlers, led by team captain Noel Maloney, would appreciate your support in Semple Stadium, Thurles on Sunday evening, September 29th when the Blues take on Kildangan in a Clean Ireland Recycling County Senior Hurling Semi-Final (throw-in 5pm). This game will be preceded by the clash of Loughmore-Castleiney & Borris-Ileigh in their corresponding semi-final (throw-in 3.30pm). The lads have worked incredibly hard this year to represent themselves, their family and their town to the very best of their ability. So, we hope to see you all Semple Stadium!

Minor: On Sunday evening last our minor hurlers completed a seven in-a-row of north titles when they defeated Toomevara after extra time in Cloughjordan. After the sides finished level at 2-14 each Éire Óg got the upper hand in extra-time to win by 4-22 to 3-20. Well done to the panel of players and the management team. The west champions will provide the opposition in the county semi-final. The time, venue and date for that fixture will be confirmed in due course. For a full report on Sunday evening’s dramatic win over Toomevara please click here.

Nenagh CBS get their 2013-14 Dr Harty Cup campaign underway this week with a number of Éire Óg players expected to feature. On Wednesday, September 25th Nenagh CBS face Midleton CBS in Charleville at 1.30pm. Midleton CBS knocked Nenagh CBS out of the competition last year. So, your support would be appreciated. Nenagh CBS’ remaining group games are against Blackwater Community School (October 23rd), Rochestown (November 6th) & Dungarvan CBS (November 20th). The quarter-finals are scheduled to take place on January 15th, the semi-finals on February 1st and the final on February 23rd. Despite winning the 2012 All-Ireland A Colleges title Nenagh CBS have never won the Harty Cup.

Under-10: Our under-10 team had a fantastic challenge game last week against Ballina. Thanks very much to Ballina for playing us. The girls also played in a blitz in Puckane last Saturday against Portroe, Silvermines and the hosts Kildangan. It was an excellent day out and thanks to Kildangan for their hospitality.

Under-12C: Our under-12C team played Lorrha-Dorrha last Saturday and unfortunately came up short against a very good side.

Under-12A: The under-12A side played Kilruane on Monday in Nenagh.

Under-14: The under-14 girls were beaten by Lorrha-Dorrha by four points last Tuesday, but made up for this result defeating Shannon Rovers last Friday by the minimum of margins.

Juniors: The juniors are playing Knockavilla Kickhams in their final group game of the championship on Sunday in Dundrum at 12 noon.

Best Wishes: The Camogie club would like to wish the senior hurlers and management team the very best in their county semi-final this weekend against neighbours Kildangan.

Under-8: Our under-8 blitz was a roaring success last Saturday morning with the weather helping out in a big way. The team management would like to thank all the lads, our own and visitors, for a great mornings hurling with games against Sixmilebridge, Ahane and Toomevara. Thanks to the parents for the refreshments and to the juvenile club for providing meals for all.

Under-10: More challenge matches are being planned. Further information will be available from the management team later this week.

Under-16: The under-16 hurlers bowed out of the championship with honour on Saturday after losing a semi-final replay against Newport by a single point following over 140 minutes of hurling. This squad showed tremendous character and resilience throughout the year, and won huge respect for the way they represented themselves, their families, Nenagh Éire Óg and their town. This summer will stand to them as under-16s and minors over the next two years as there is huge potential in this team. We would like to thank the parents and families of the squad for all the help and support provided. The full-time score in the semi-final replay was: Nenagh Éire Óg 2-19 Newport Gaels 4-14. The juvenile club would also like to thank the management team of Michael Grey, Paudie Gleeson and Christy McLoughlin for all their hard work and enthusiasm throughout the year.

Thurles: The juvenile club are look forward to seeing all the boys in Thurles on Sunday for the senior county semi-final. Wear your jerseys proudly lads and support your club!

There will be a registration night for Nenagh Handball Club on Thursday, September 26th at 8pm in the Éire Óg complex. New members welcome. Membership is free for all Nenagh Éire Óg members and is €20 for all others with a maximum of €30 per family.

We wish the best of luck to Sinéad Meagher in her All-Ireland final on Sunday in Garryhill, Co. Carlow and to Eamon Spillane and Gerry Foley as they compete in the Emerald Masters All-Ireland final in Ballina (Tipperary) on Saturday at 3pm against a Galway pairing.

Our September edition is due out on the 30th of this month. We ask all managers of the Camogie teams to please submit photographs and reviews of how their respective teams have done so far this year. If anyone has anything that they would like to include in the newsletter please email eireognenagh@gmail.com.

We are always looking for people to contribute to the newsletter. So, if you have any news, articles, photographs or anything else that might be of interest please email eireognenagh@gmail.com.