Another hectic week for the club with plenty of ups and downs – well done to the Éire Óg minor A hurlers who qualified for the north final against Toome.
[hr] 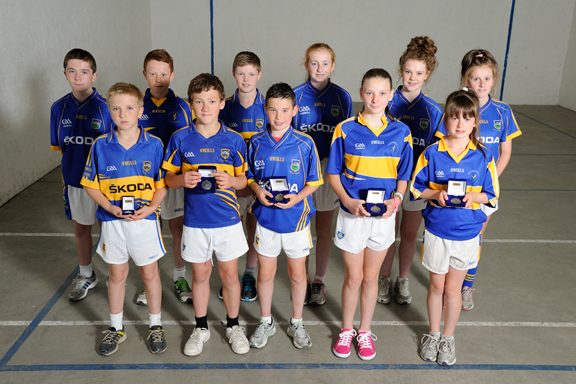 The Munster juvenile handball finals were played over the last two weeks. Nenagh Handball
Club’s Eimear Meagher won the under-13 singles while her sister Sinéad won the under-14 singles. Sinéad Meagher is pictured fourth from the left in the back row of the above photograph while
Eimear Meagher is pictured first on the right-hand side in the back row.
[hr]
SENIOR

County Senior Hurling League: Our senior hurlers were defeated by Burgess in the replayed Fr Fogarty Cup final on Sunday afternoon last in Toomevara – the final score was: 1-14 to 1-19. Click here for the match report.

Clean Ireland Recycling County Senior Hurling Championship: Nenagh Éire Óg and Loughmore-Castleiney qualified for the county senior hurling championship quarter-finals with recent wins over Silvermines and Roscrea respectively. The forthcoming quarter-final will represent the Blues’ 17th appearance in the last eight (Éire Óg have won nine of their quarter-finals to date and lost seven – Éire Óg made their first appearance in the quarter-finals in 1982 and their last in 2011). Éire Óg’s opposition in the quarter-finals will be known this weekend following a draw which we expect to made on Saturday evening in Holycross following the last two games in round four of the senior championship: Borris-Ileigh v Carrick Swan (2.30pm) and Toomevara play Clonoulty-Rossmore at 4.30pm. Éire Óg will face one of the seeded divisional champions – Kildangan (north), Killenaule (south), Éire Óg Annacarty-Donohill (west) or Drom & Inch (mid).

Minor A Hurling: On Monday evening our minor hurlers saw off Borris-Ileigh (1-20 to 0-9) in the semi-final of the Ger Gavin North Tipperary minor A hurling championships in Dolla. In their respective semi-final Toomevara enjoyed a highly-impressive 1-19 to 1-10 win over Roscrea. The date, time and venue for this final is yet to be confirmed.

Under-6: Both under-6 teams hosted their Roscrea counterparts in Nenagh on Saturday morning. Great fun was had by all.

Under-8: Our under-8 hurlers brought the Jack Ryan Cup home to Nenagh from Roscrea for the first time in four years last Saturday morning in what was a great day of hurling for all the teams involved. Our boys put in super performances and it was great to see how much they have all improved since the year started. Keep up the good work lads. Our thanks to Roscrea for another well run tournament and to all the parents who travelled for their continued support.

Under-10: Training continues on Wednesdays at 5.15pm and Saturdays at 11.15am. There will be challenge matches soon.

Under-12: The under-12 group one and four hurling teams welcomed Ferbane/Belmont to McDonagh Park for two competitive challenge games last Saturday. We look forward to travelling back to the Faithful County in a couple of weeks for a return fixture. With all the boys back to school this week; training will continue on Saturdays only for the month of September.

Under-14: Our under-14 hurlers put in a spirited display from first to last whistle in the north Tipperary under-14A hurling final on Wednesday last in Cloughjordan, but unfortunately fell short in the end to a strong Roscrea team. It has been a super season of sport for these great lads, winning the north football final and reaching the north hurling final. Our thanks go to manager David Minogue, Donie O’Brien and Mike Hallinan for all their hard work and to the boys themselves for the huge effort they put in all year. We wish Roscrea all the best in their county semi-final. To read a report on the heroic efforts of our under-14s please click here.

Under-16: The under-16 hurlers are through to the semi-finals of the north championship where they will play the winner of Newport versus Ballina on Monday, September 16th.

Congratulations to Nenagh’s Eamon Spillane and partner Gerry Foley (Ballinahinch) on reaching the All-Ireland Final of the Emerald Masters competition when they beat the Ulster champions in Cavan on Saturday. Well done also to Cameron Spillane on being part of the Tipperary under-12/13 team which won the Munster championship in Limerick last weekend. In more good news for the club doubles partners Aaron Hogan and Eoin Meagher are through to the final of the Paddy Kelly (Lahorna) Memorial Tournament which should be played next
week. Best of luck lads.

Under-8: Our under-8 team are training away and parents should contact mentors for details

Under-10: Our under-10 team played in the Maura Walsh Blitz in Dundrum two weeks ago and reached the semi-finals. It was a fantastic day out and was enjoyed by all the players. Thanks to Dundrum for hosting the tournament. The girls played in another fantastic blitz last Saturday in The Ragg and also played Newport in a game on Monday last.

Minor: Our minors play Clonoulty-Rossmore away on Tuesday in the championship.

Junior B: Our juniors are playing Moneygall on Saturday at 4pm in Moneygall in the championship. We wish them the very best of luck.

Skirts: Club skirts at the subsidised cost of €10 are available from Denise Morris.

Bereavement: We extend our sympathies to Louise Hickey and her family following the death of her aunt.

We are always looking for people to contribute to the newsletter. So, if you have any news, articles, photographs or anything else that might be of interest please email eireognenagh@gmail.com

A clothing recycling drive in aid of the Nenagh Éire Óg juvenile club took place on Saturday. Thanks to everyone who contributed to this hugely successful event.

Nenagh Éire Óg are proud to host a 2013 ‘Gathering’ event on Sunday, September 8th (2-6pm) with all proceeds going to the Shane Delaney Trust. Entry is free and we have something for all the family with face-painting, outdoor games and lots of activities for the younger kids and live music with super band Outa Diesel. We will also be showing the All-Ireland hurling final on a giant screen. So, come and watch the match and enjoy the craic. Free refreshments will be served throughout the day and all are welcome.

Nenagh man, Shane Delaney, had an accident earlier this year in Australia and suffered damage to his spinal cord leaving him paralysed from the chest down. After having surgery in Australia Shane returned to Ireland near the end of June and has been working hard at his rehabilitation in Dun Laoghaire for the past few weeks. He is extremely positive and mentally strong and has been an inspiration to our whole community.

Shane and his family have strong links to the Nenagh Éire Óg club with both himself and his brothers, David and Liam, representing the club at juvenile level and remaining strong supporters throughout. Nenagh Éire Óg has joined together with Nenagh Ormond RFC, Nenagh AFC and Nenagh Celtic to organise a huge fundraising event for Shane on Sunday, September 14th. Tickets for the event are priced at €20 each, are now on sale for this event and are available from club officers and committee members. Please support this very worthy event!