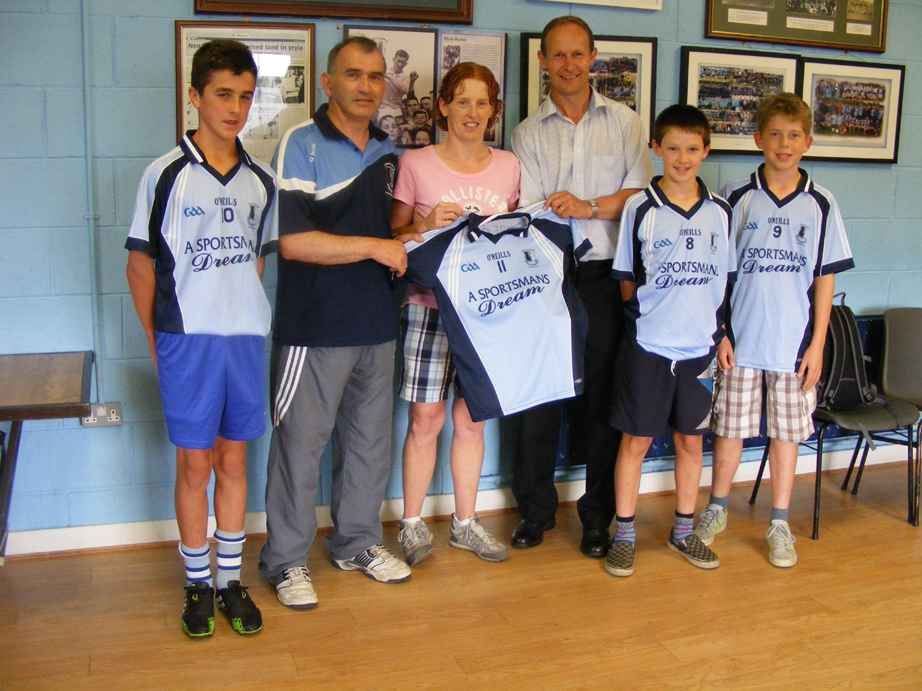 Deirdre Hughes, representing A Sportsman’s Dream, pictured presenting a new set of jerseys to John Phelan (Éire Óg under-12 manager) and Michael Geaney (Chairman of the Juvenile Club – also present are members of the Blues’ under-12 team.

Clean Ireland Recycling County Senior Hurling Championship: The Blues enjoyed a four-point win over Upperchurch-Drombane in round three of the county championship on Saturday evening last – final score: 2-18 to 1-17. Round four is due to take place in three weeks’ time – details of the opposition and date to be confirmed.

Junior A Hurling Championship: Our junior A team are due to continue their championship campaign this weekend against Toomevara. See fixtures for details.

Junior B Hurling Championship: The junior B team are due to play their second round game against Portroe this weekend. See fixtures for details.

Minor Football: Best wishes to Paul O’Leary and the Tipperary minor footballers who play Monaghan on Monday next in the All-Ireland quarter-final.

Under-6 & Under-8: Back to normal training now that the Summer Camp is over – Wednesdays at 5.15pm and Saturdays at 10am. A big thank you must go to camp sponsor Christy Manning for his continued help and support of the Juvenile Club.

Under-10: Training resumes Wednesday at 5.15pm.

Under-12: Well done to our under-12 group four team who beat Toomevara in Nenagh on Friday last to reach the north final of the Go Games competition where they will face Templederry. The group one team play their semi-final against Roscrea this Wednesday, July 31st at 7pm. Best of luck boys!

Under-16: The under-16 championship is progressing nicely for the lads who enjoyed a good win over Ballina in Nenagh last week on a score line of 3-20 to 0-5. Their next round match against Roscrea has been postponed so the next scheduled game is against Toomevara in Nenagh on August 5th.

Thanks: Many thanks to A Sportsman’s Dream in Nenagh for their sponsorship of the juvenile jerseys. They had their first outing on our under-12 team on a recent trip to Cork and they did you proud. We would hope that club members will show their continued support for our sponsors A Sportsman’s Dream.

Under-13: Our under-13s defeated Ballina last week in the opening round of the championship and played Silvermines on Monday last.

Junior: Our juniors open their championship campaign on Monday, August 5th against Ballina in Ballina.

Summer Camp: The club Summer Camp last week was a huge success with over one hundred young people taking part. Thanks to all the organisers and coaches who made it a very successful and enjoyable week.

Tipperary Intermediates: Hard luck to the Tipperary intermediate team that was defeated by Waterford in the Munster final. Ciara McGrath played for Tipperary and scored a great point.

Tipperary Under-16s: The very best of luck to Grace O’Brien, Rachel Maher, Rachel Spillane, Saoirse Gleeson and the Tipperary team in their quest for All-Ireland glory this weekend. We hope a huge following from the club will travel to support the team and our own players in particular. They have worked extremely hard under the watchful eye of manager Brian Boyle. The All-Ireland final takes place in Portlaoise at 12 noon on Saturday.

If you can’t make it to the club house on the day please contacts Shane Connolly on 087 637 3830 or Ger McCarthy on 087 653 9229 before August 31st to make arrangement for the collection of items. Thank you for your support and for taking the time and effort to support our fundraising drive.