Another terrific week for the Blues with the Nenagh Éire Óg under-14 Camogie team narrowly missing out on an historic All-Ireland Féile na nGael title on Sunday afternoon in Limerick.

Senior: The draw took place last Monday for round three of the county senior hurling championship. Nenagh Éire Óg will face Upperchurch-Drombane. This game will be played in the coming weeks.

Junior A: On Friday evening last in Toomevara our junior A hurlers launched the defence of their championship with a 0-16 to 0-14 win over Kilruane MacDonagh’s. Roscrea will provide opposition in the second group game.

Minor A: Our minor hurlers maintained a one hundred per cent start to their championship campaign with an eleven-point win over Borris-Ileigh last Wednesday evening in MacDonagh Park, Nenagh. Final score: 2-19 to 1-11.

Junior B: Our junior B team will begin their championship campaign in the coming week. See fixtures for details.

Commiserations: Hard to luck to Michael Heffernan and the Tipperary senior hurlers who bowed out of the All-Ireland championship following a defeat suffered at the hands of Kilkenny on Saturday evening. 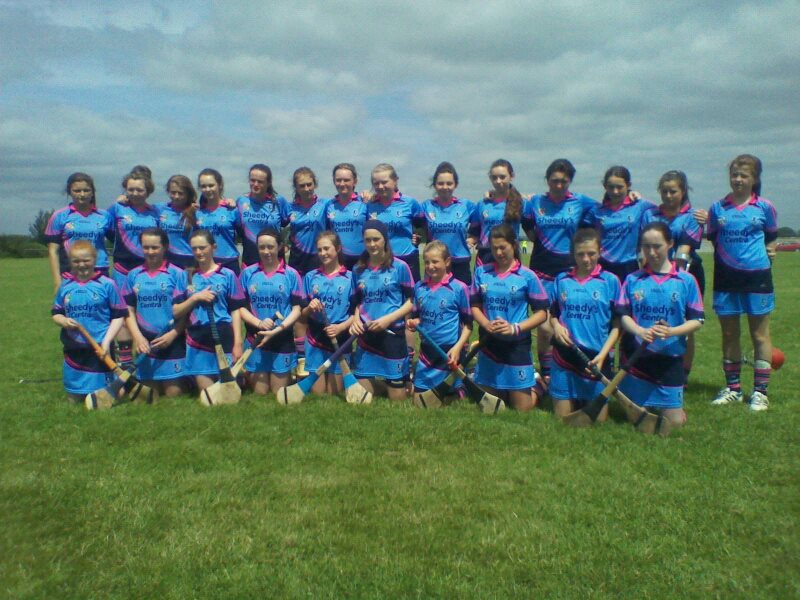 The Nenagh Éire Óg under-14 Camogie team which narrowly missed out on
an historic All-Ireland Féile na nGael title on Sunday afternoon.

Féile na nGael: Our Féile na nGael team enjoyed a fantastic weekend at the All-Ireland finals in Limerick. Our host club Killeedy could not have been more welcoming to our players and made us feel instantly at home. We wish to thank the club and the families for their hospitality and many new friendships have been formed. The girls enjoyed a feast of Camogie playing Killeedy, Newcastlewest, Sarsfields New Inn and Davitt’s of Derry before playing Dicksboro of Kilkenny in the Gaelic Grounds in the final. Unfortunately the Cats proved too strong winning on a scoreline of 3-2 to 1-1. However despite the result the whole weekend has been a positive experience for all our players and many lasting memories and friendships have been formed. Thanks to all who so generously sponsored the panel over the last few months, your kindness will not be forgotten. To the parents, management and committee the whole club owes you a debt of gratitude for all your hard work over the last few months. And finally the players themselves – they have done the whole club and parish of Nenagh proud with their hard work ethic, skilful displays and determination over the last few months. The host families have nothing, but praise for you all for how polite and well-behaved you were over the weekend. The whole club is very proud of you all.

Under-13: Our under-13s played Silvermines in Dolla on Tuesday in their opening fixture of the championship. The result was not available at time of going to press. They play Ballina this Friday at 6.30pm in Nenagh in the second round.

Minors: Our minor team play Cashel next Tuesday in the opening round of the championship in Nenagh.

Juniors: Our Juniors were defeated by Burgess last week in the Munster league, but finished off the group stage of the competition with a fine win over Wolf Tones of Clare on Sunday last. Well done girls.

Tipperary: Well done to Grace O’Brien and Rachel Maher who were members of the Tipperary under-16A team which defeated Galway at the weekend and qualified to meet Dublin in the All-Ireland semi-final in two weeks. The Tipperary under-16B team defeated Down and we were represented by Saoirse Gleeson, Aisling O’Brien, Michelle Collins, Sarah Quigley and Rachel Spillane.

Sympathies: We wish to extend our sympathies to Kate McGrath on the passing of her mother last week.

Under-14: Nenagh under-14s played out 2-5 to 2-5 draw away to Kilruane MacDonagh’s on Wednesday night last in the second round of the championship. The next match is at home to Kildangan on Wednesday, July 10th at 6.45pm. Come on out to support the lads.

Under-16: The Éire Óg got their championship campaign off to an impressive start on Monday evening in MacDonagh Park, Nenagh when beating Borris-Ileigh 5-11 to 2-7. The lads’ next match is away to Newport on Monday, July 15th. These lads have put in a huge amount of work lately both in challenge matches and training so let’s get behind the team for the summer.

Congratulations: Congratulations to the under-14 Féile na nGael Camogie team on reaching the final of the Division1 competition last weekend. This was a great achievement. Well done to all involved.

If you can’t make it to the club house on the day please contacts Shane Connolly on 087 637 3830 or Ger McCarthy on 087 653 9229 before August 31st to make arrangement for the collection of items. Thank you for your support and for taking the time and effort to support our fundraising drive.
[hr]
If you need to contact Éire Óg please do so via our Contact page. You can also keep in touch by accessing our Facebook page or by following @nenagheireog on Twitter. We would also ask you to consider supporting Éire Óg by entering the club lotto and by paying your club membership.