Sinead Meagher seeks world domination, the seniors capture the county league title while Grace O’ Brien inspires Tipperary to an All-Ireland quarter-final win over Waterford. Once again this week’s notes are crammed with news on the Blues.

We extend our best wishes to Nenagh Handball Club’s Sinead Meagher and her handball partner Catriona Mullane from Tuamgraney who head Stateside this week to participate in the World Handball Championships in Minnesota. They will compete in the one wall and four wall championships in the under-19 competitions. The girls have been preparing extremely hard for these games under the tutelage of their coach Eamon Spillane. Sinead captured the world under-17 championship back in 2015 and if you’d like to read more about that achievement please click here.

Tickets are now available for our annual race day, on Friday August 10th, which takes place in Tipperary Race Course and features music from the excellent Little Green Cars.

Last year’s event was a fantastic success with great craic had by all, some money made on the racing and of course dancing long into the evening.

With the amazing Little Green Cars performing on the night there is guaranteed entertainment for the music fans out there while a full race card means a packed day of horse racing for punters. 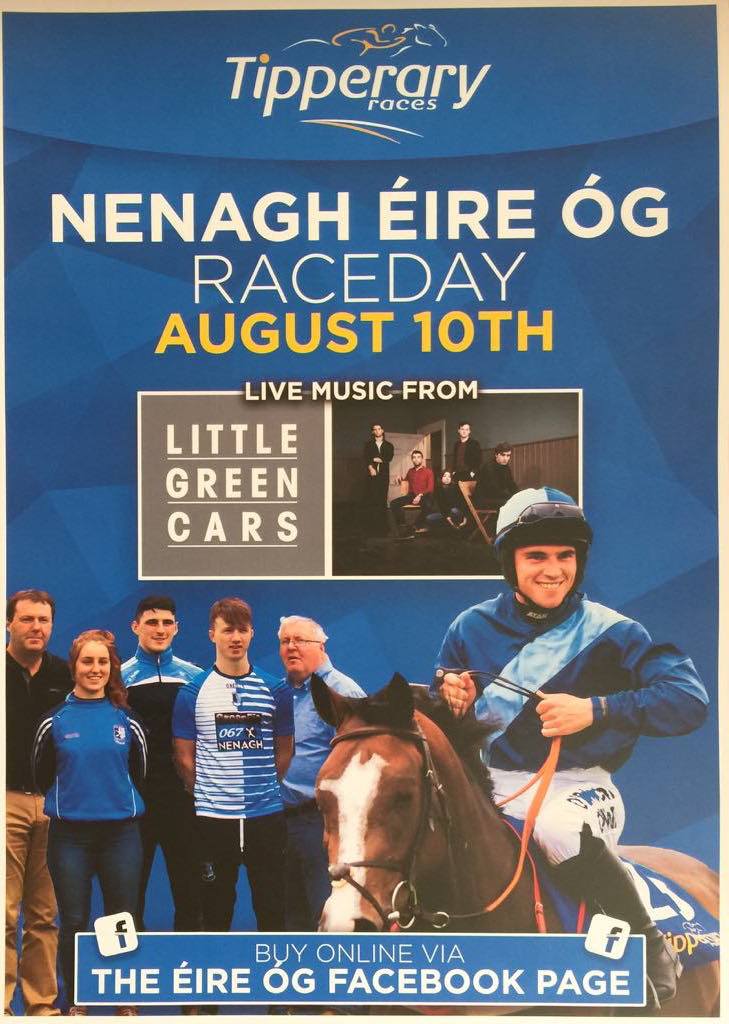 Congratulations to Sarah Quigley, Grace O’ Brien and the Tipperary senior camogie team on their 1-14 to 1-7 win over Waterford in the Liberty Insurance All-Ireland championship in Páirc Uí Chaoimh. Grace was in scintillating form scoring two first-half points, the first of which was the opening score of the game which helped settle any Premier nerves. She was also very unfortunate to see a bullet of a goal called back by the referee for a free out to Waterford. They now face Cork in the All-Ireland semi-final in Semple Stadium in two weeks time while Galway face Kilkenny on the other side of the draw. For a full match report please click here.

Congratulations must also go to the Tipperary intermediate side who had a comprehensive win over Kildare 7-26 to 2-4 in Hawkfield, Newbridge. This means that, not only have they qualified for the All-Ireland semi-finals, but have also topped their group. Nenagh Éire Óg are represented by Hazel McAuliffe, Caroline Browne, Sarah Quigley and Ruth Hassett. Nenagh Handball Club star and Kiladangan player Sinead Meagher is also a member of this panel. 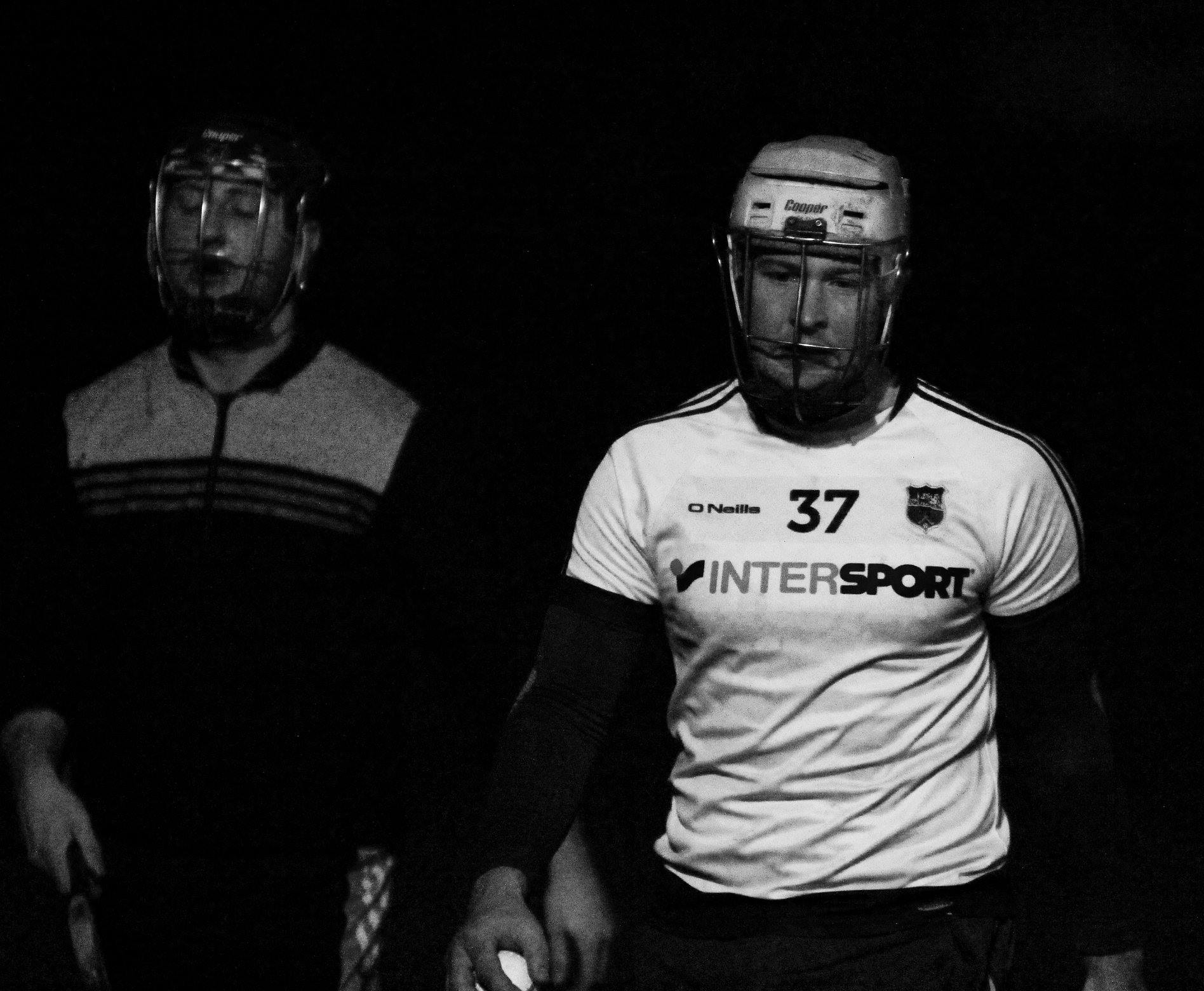 We wish Jake Morris, Shane Hennessy and the Tipperary under-21 side the very best of luck in their Bord Gais Energy All-Ireland semi-final clash with Leinster champions Galway in Limerick on Wednesday evening, throw-in 19:30pm. Shane, following his assured performances between the posts for the Nenagh senior hurling team, was recently called into the panel. For those who can’t make it, the game is live on TG4. The winners of this fixture will play Munster champions Cork in the All-Ireland decider.

Grace fires over a point against Waterford 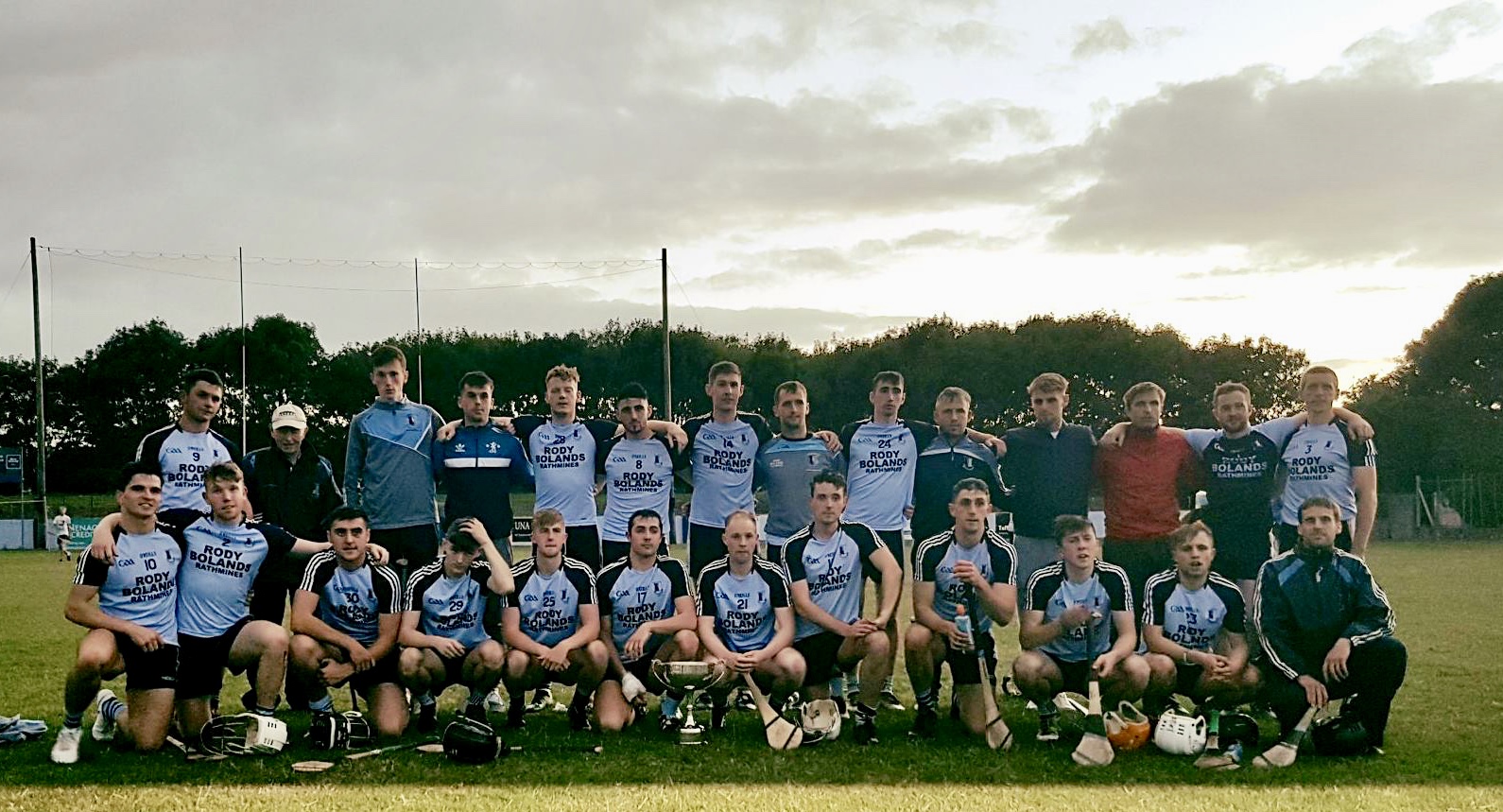 Congratulations to our senior hurlers who captured the Johnny Ryan Cup following a 1-18 to 0-25 win over Borris-Ileigh in MacDonagh Park last Tuesday evening. With the previous Friday night’s clash against Kiladangan having gone to extra-time, the last thing John Fitzgerald’s men needed was another draw but that is just what they got and in the extra-time periods they showed their metal and fitness to pull away from their opponents and win by four. Congratulations to all involved. For a full match report by Brian McDonnell in the Tipperary Star please click here.

The lads will play Clonoulty Rossmore in the next round of the county championship on Sunday, August 12th, at 15:30pm in The Ragg. This game will be preceded by the clash of Toomevara and Éire Óg Annacarty at 2pm.

Our junior-A footballers have been training away in recent weeks under the watchful eyes of Padraig O Leary, Joe Hanrahan and Niall Cahill as they prepare for their North Tipperary quarter-final clash with Inane Rovers on Tuesday 14th August in Roscrea. If you are interested in joining the panel please contact any of our social media accounts by sending a private message. 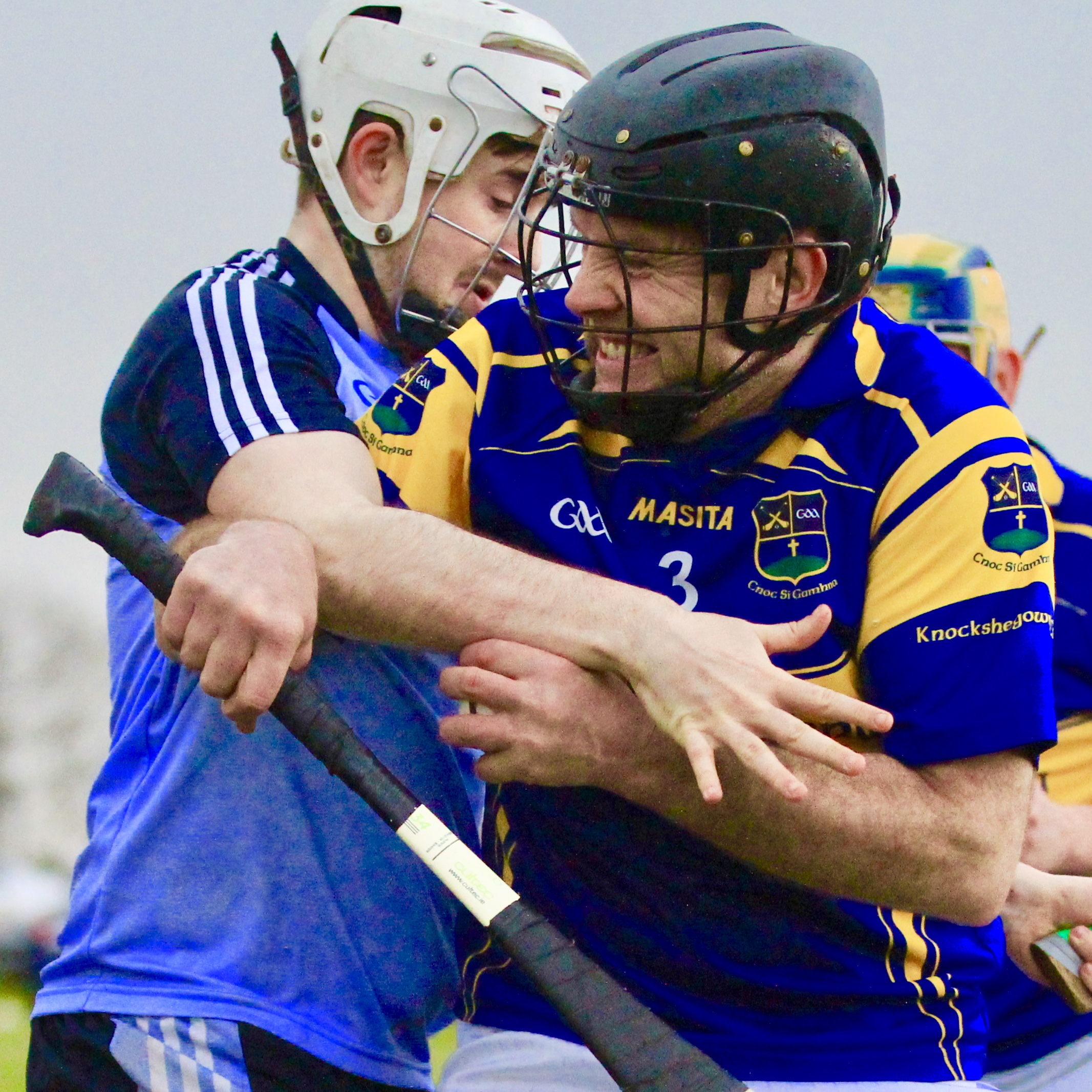 Our junior-A hurlers finally got to play Knockshegowna in their final round robin match and recorded a 2-17 to 1-14 win which has ensured their passage to the knock out stages of the championship. Well done to all involved.

This week the GAA celebrates the 100th anniversary of Gaelic Sunday, a day when the association openly defied the British authorities in Ireland by staging numerous matches across the country without seeking permission through permits. Nenagh took on Ballymackey in Kilruane and the game finished a draw, 3-2 to 2-5. The local RIC sergeant did arrive but was refused entry to the game by a diligent gate checker as he had not paid his entrance fee. Please see the Guardian’s report (10 August 1918) on the day below. 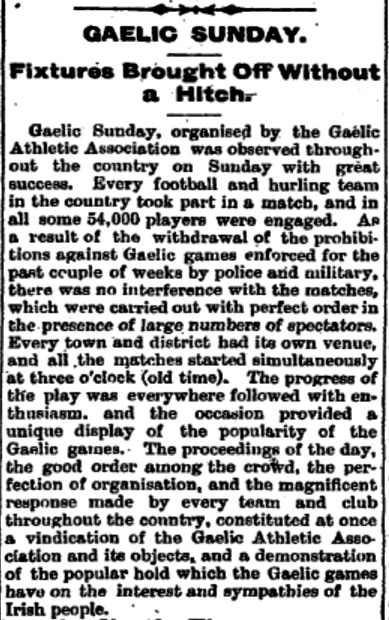 You can read more about Gaelic Sunday by clicking on the link in the Tweet from @OfficialGAA below.

This weekend the GAA will mark the centenary of Gaelic Sunday.

Join us in commemorating this day by getting out and playing with your family, friends or club! Post your pics on Twitter/Instagram and you could be on the @CrokePark big screen this Sunday! https://t.co/ZQjaAIyAMg pic.twitter.com/eAGklOU8iM

Recently our senior team travelled to Portaferry to participate in a tournament hosted by Ballygalget GAA Club and this week two young Gaels were pleasantly surprised when they received a package with two Éire Óg tops from their guests Michael and Noel. This was a lovely gesture lads and reflects extremely well on our club. Well done.

Two little @BallygalgetGAC players were delighted with their new @nenagheireog gear from Michael and Noel as a thank you for hosting them during their club's tournament week. Thank you for your generosity lads! GAA family is the best! pic.twitter.com/tJVrdiRA7C 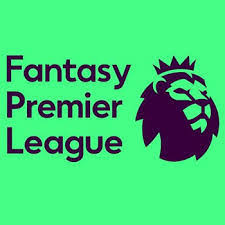 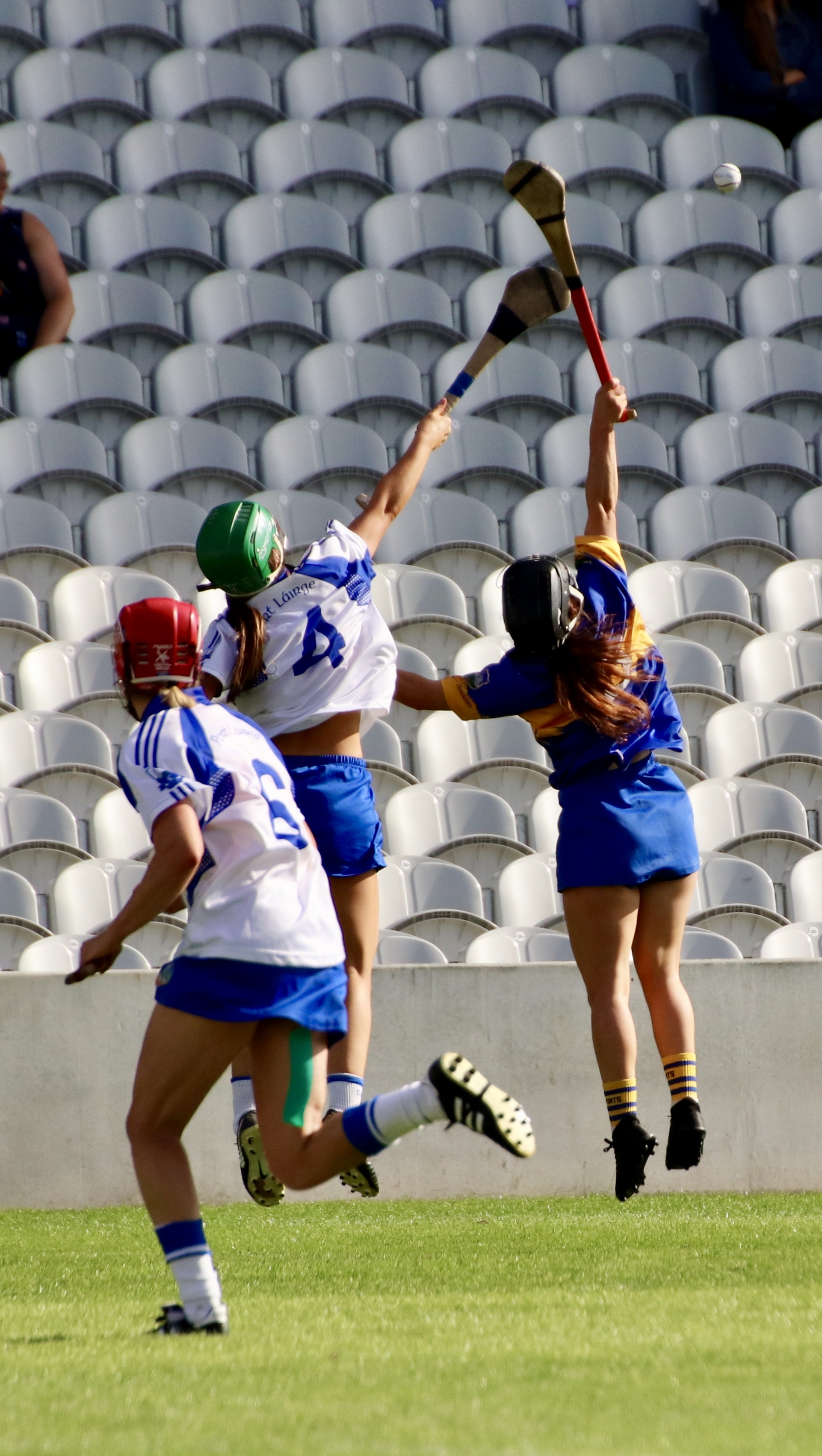