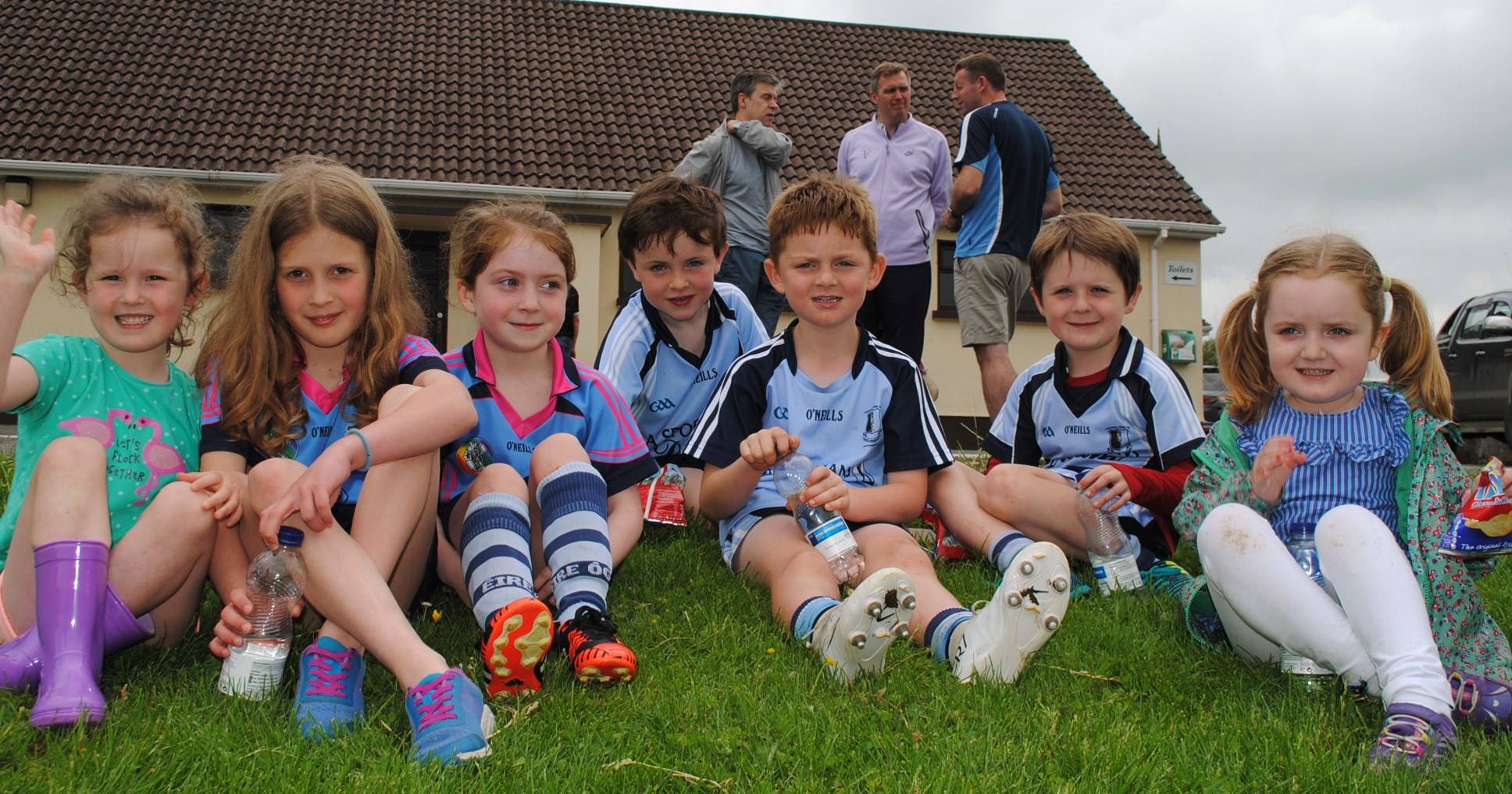 Some of our under-8 hurling and camogie players enjoying themselves in MacDonagh Park, Cloughjordan

Online registration opens for the Blues’ 5km and 10km family fun run, Jake Morris is instrumental in Tipperary’s fightback while details of the annual summer camp are revealed. This week’s notes are packed with news on the Blues.

Some of our under-8 hurling and camogie players enjoying themselves in MacDonagh Park, Cloughjordan 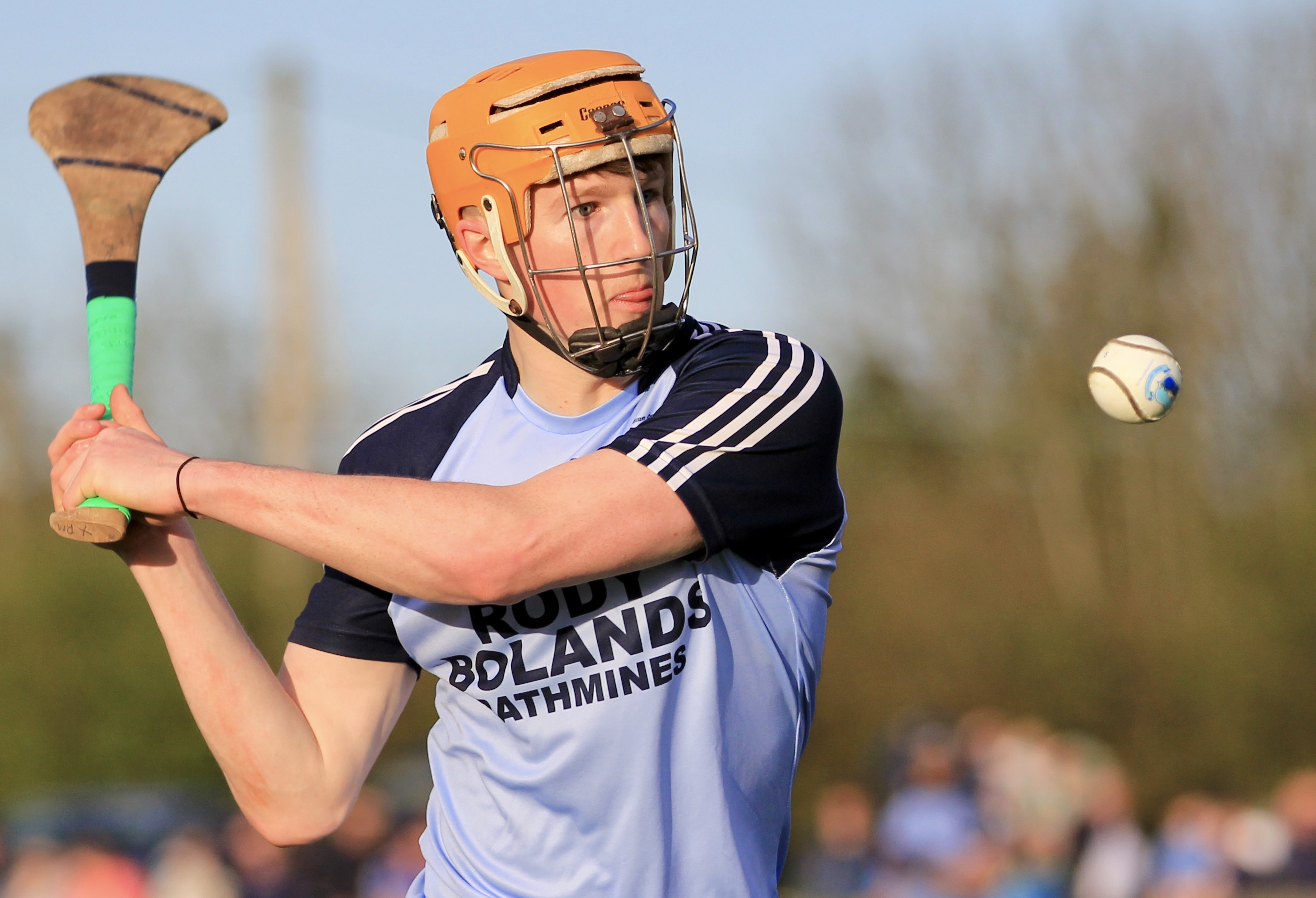 Congratulations to Michael Ryan’s Tipperary side who came from eleven points down to snatch a draw in the Gaelic Grounds yesterday in the Munster championship. Jake Morris was introduced in the second half and made a dramatic impact on proceedings. He put Waterford’s Austin Gleeson under severe pressure that led to Tipperary’s second goal while also finding Ronan Maher with a delightful pass that resulted in Tipperary’s second last point before winning the crucial free that led to Jason Forde’s equaliser deep in stoppage time. The side face Clare on Sunday next in Semple Stadium requiring a win to keep any hopes of finishing in third place alive. 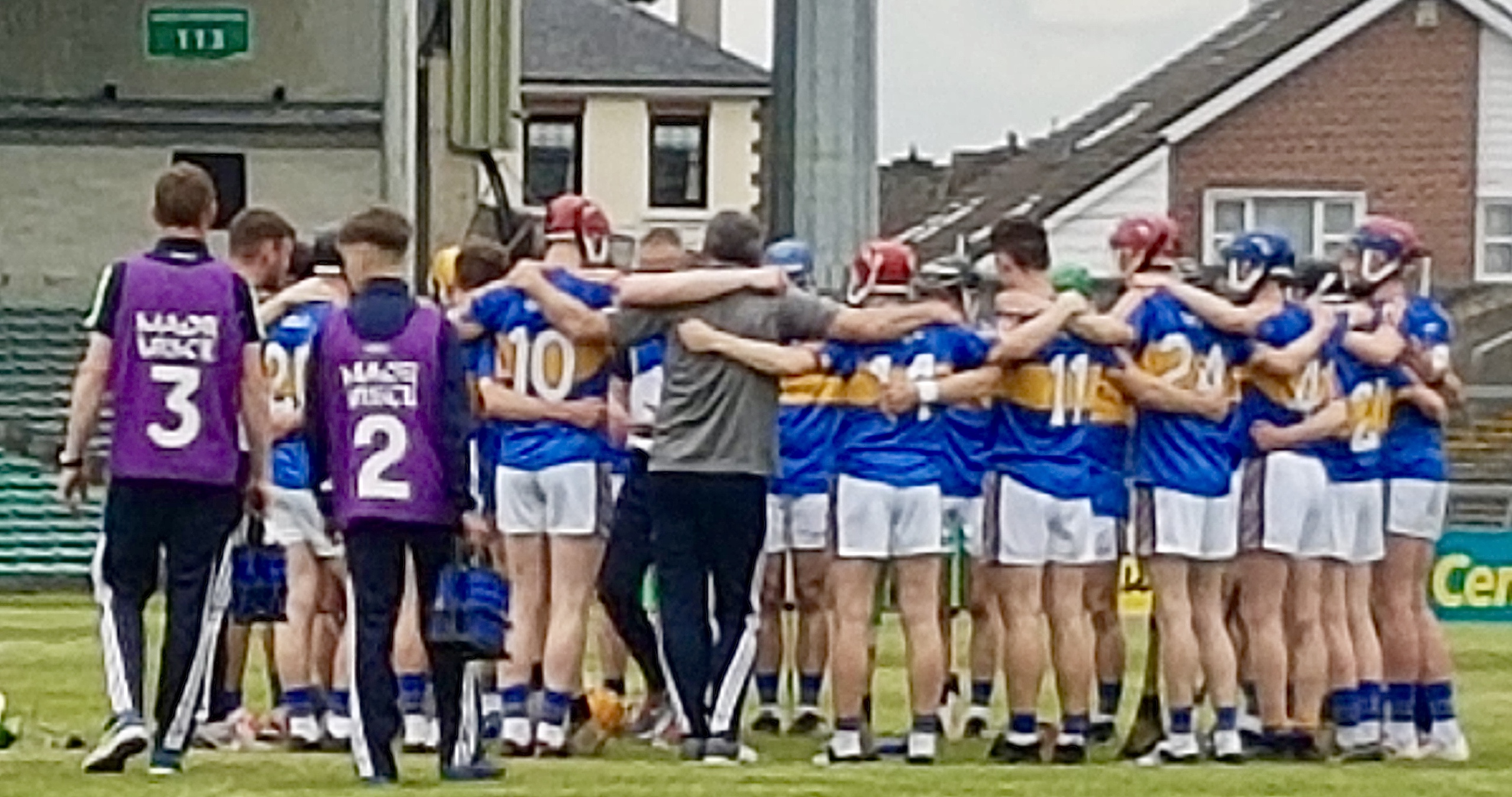 We commiserate with the county minor side who were defeated by Waterford in a dramatic game yesterday. Seán Phelan had a fine game at wing-back while Cian O’ Farrell was introduced as a second-half substitute. This side face Clare on Sunday next in their final game of the round robin series in Semple Stadium. 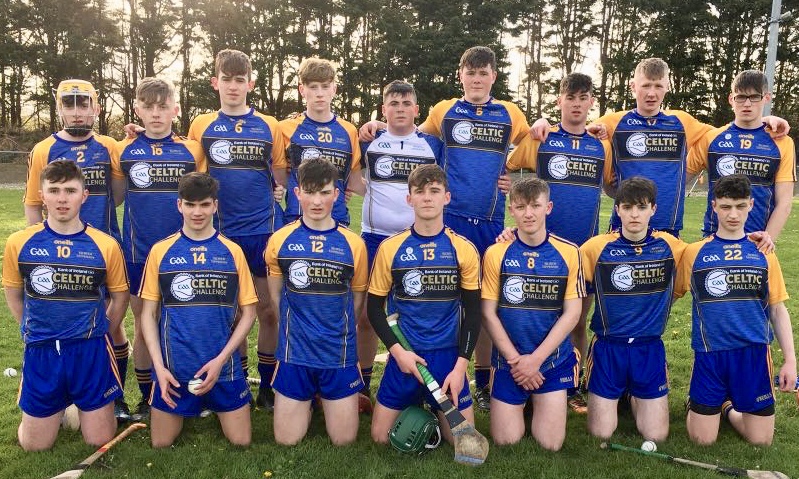 The North Tipperary/Mid Tipperary team play Galway McDonagh on Wednesday evening in MacDonagh Park, Nenagh at 19:30. This team features our own Liam Heffernan, Conor Hennessy and Gavin Dooley while both Shane Connolly and Michael McNamara are part of the management team. Best of luck to all concerned.

Our senior side return to action on Tuesday, June 12th at 8pm, when they travel to The Ragg to take on Drom & Inch in the next round of the county league.

Our junior-B side played their first championship game in two years when they faced Silvermines in MacDonagh Park on Friday evening and unfortunately were beaten 3-26 to 3-7. Despite the result there were a lot of positives from the game including the performance of young Martin Donnellan at full-forward who bagged three goals for himself. Congratulations also go to Brian Duffy who was named captain for the year. This year the junior-B side are managed by Leonard Ryan and Enda O’ Sullivan.

Under-6 training continues on Tuesday at 6pm and Saturday at 10am. We have had great numbers so far and please keep practicing at home to develop the skills gained.

The under-8 hurlers had a busy morning on Saturday as they had their first hurling blitz of the year in Cloughjordan. The boys had three teams and were joined by Kilruane MacDonaghs, Moneygall and Borrisokane with each team playing three games from 10am until 11am. A huge thanks as always goes to Kilruane MacDonaghs for the wonderful welcome and hospitality. The morning was a huge success. The hard work that the group are putting in practicing at home is really starting to show. Training for hurling and football continues at the usual times. 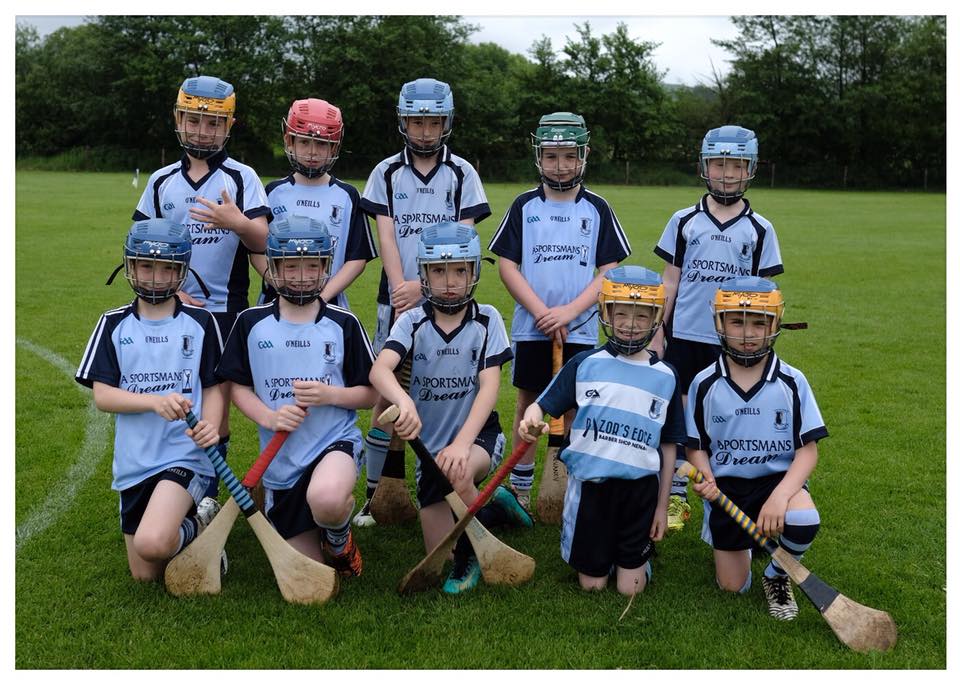 The under-10 hurling panel travelled to Dolla last Saturday to play Silvermines. All of the panel played two games each. Our thanks go to Silvermines for the game and hospitality. Under-10 football continues Tuesday evening at 6pm. Hurling training continues Wednesday at 5:15pm and Saturday mornings at 10am. 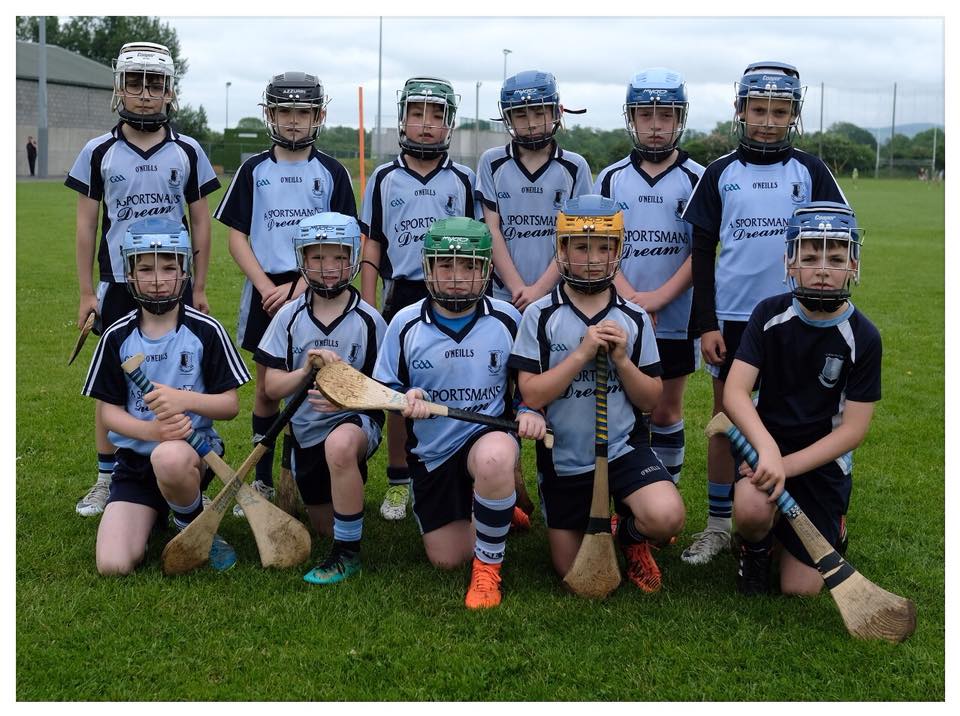 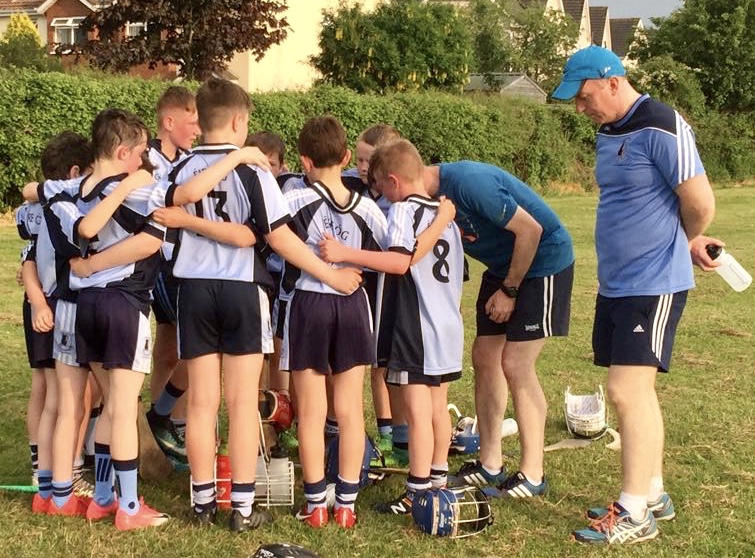 The under-12s receive words of encouragement from Kevin Tucker

The under-12 hurlers got the season off to a winning start on Friday last. The A’s recorded a win over Roscrea in a highly entertaining game, with some superb scores from both sides. Unfortunately, Kiladangan were unable to field in the D match. Both teams play Toomevara on Friday next in Nenagh. Throw in for the first game is 18:45.

The under-14 hurlers begin their season on Tuesday evening at 6.30pm against Borris-Ileigh. Best of luck to the lads. 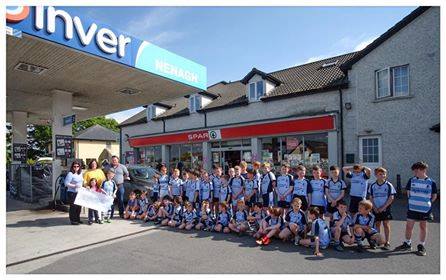 The Nenagh Éire Óg juveniles were delighted to visit our neighbours Inver/Foley’s Spar in Gortlandroe during the week to receive sponsorship from their ‘Leading Lights at Inver’ programme. Many thanks to Louise Carmody for the nomination.

With the hurling championship starting on Friday, our Community Games team reaching the Munster Final stages next month and our ‘Blues’ 10K Run on June 16th along with everything that we try to subsidise for our young families, this sponsorship is hugely appreciated. Thanks to Tom Doherty at Nenagh Camera for the photo. Please support our sponsors! 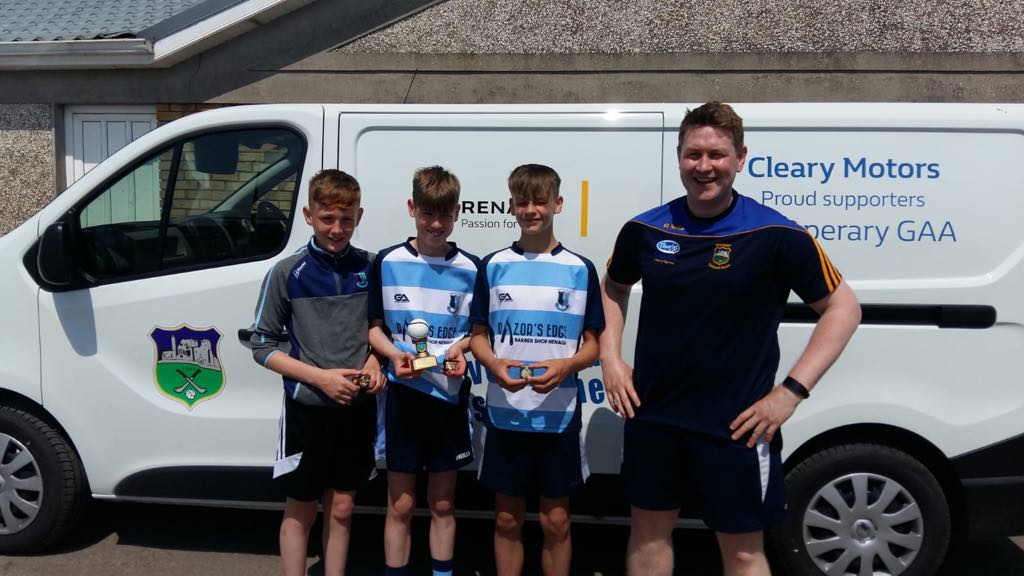 Congratulations to our juvenile hurlers Cian Connolly, Cian Carmody, Jack McLoughlin and Nenagh CBS Primary School on their county final skills win during the week. The lads are pictured here with North Tipperary GDA, Paudie Malone. Paudie is doing an excellent job working with and supporting all of the schools and juvenile clubs in North Tipp. Well done to all!

Our under-8 girls had a busy Saturday morning with their first blitz of the year. The girls fielded four teams teams and played Kilruane MacDonaghs and Toomevara from 11.15 until 12.15. A huge thanks as always to Kilruane MacDonaghs for the wonderful welcome and hospitality. The morning was a huge success. The hard work that the group are putting in practicing at home is really starting to show. Training continues each Thursday at 6pm. We hope to play plenty of blitzes over the next few weeks. New players always welcome. 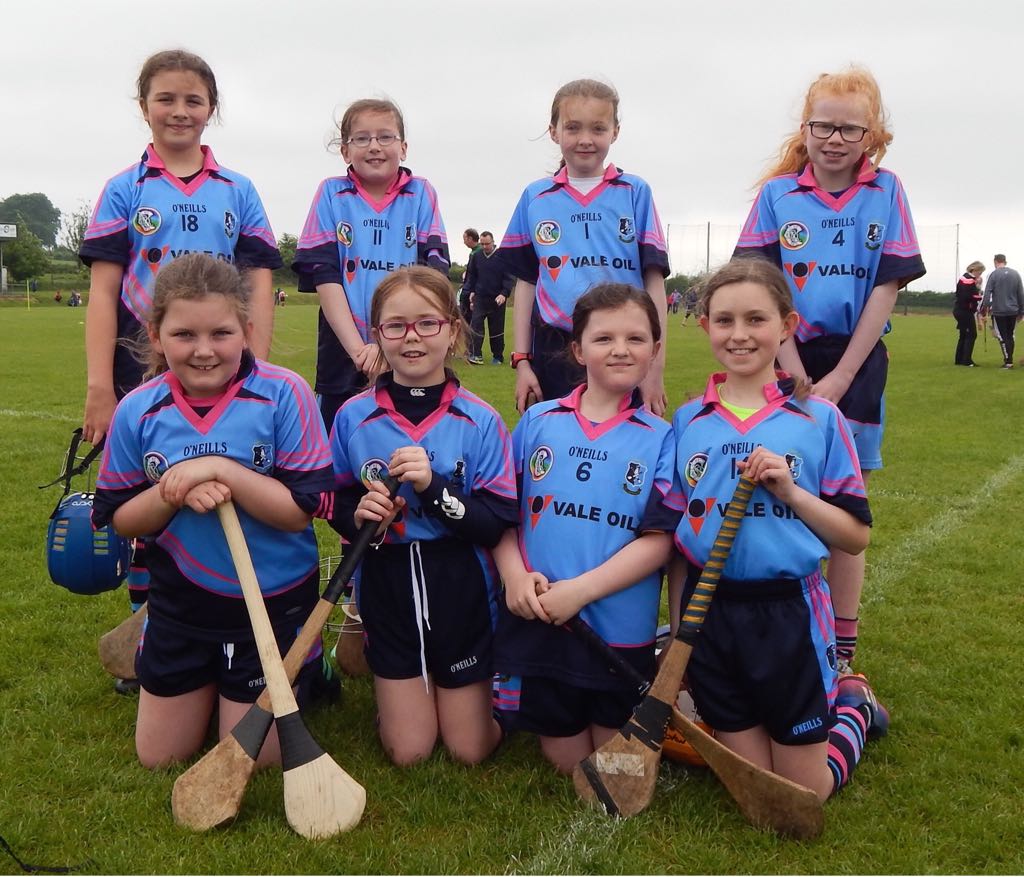 We took part in a county blitz in Portroe on Saturday morning last. Despite a number of absentees we still fielded two teams with each team playing three matches. Everyone did really well and competed for every ball. Thanks to Portroe for hosting the event and their hospitality. Training continues Monday 5.30pm. Newcomers always welcome. 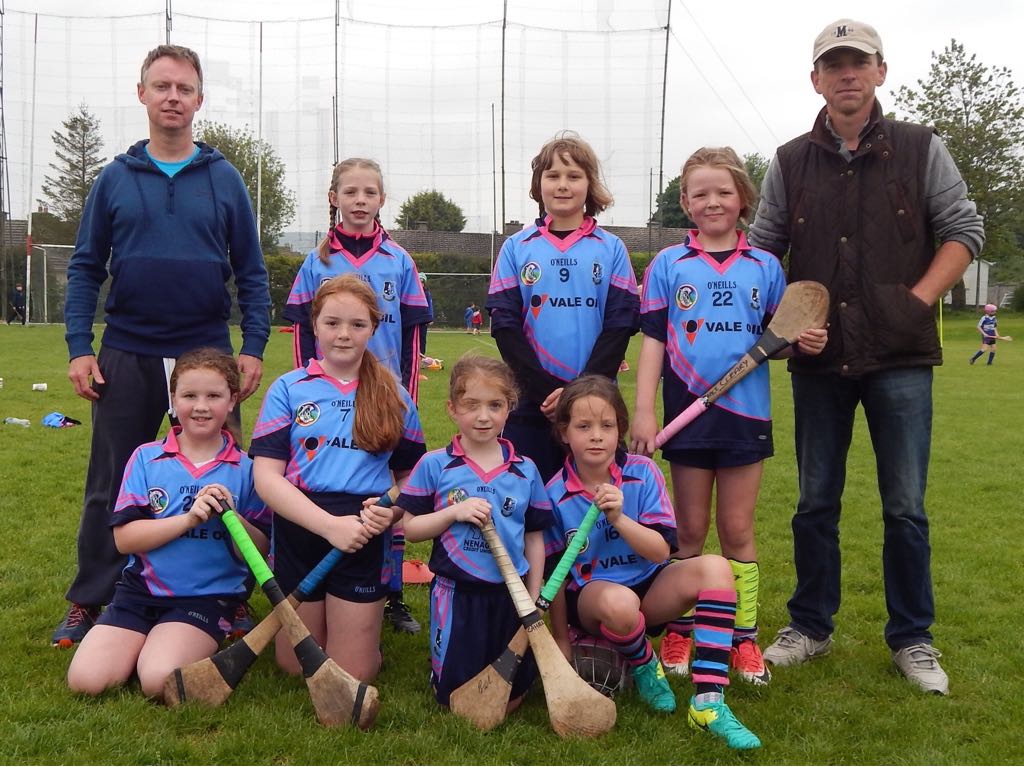 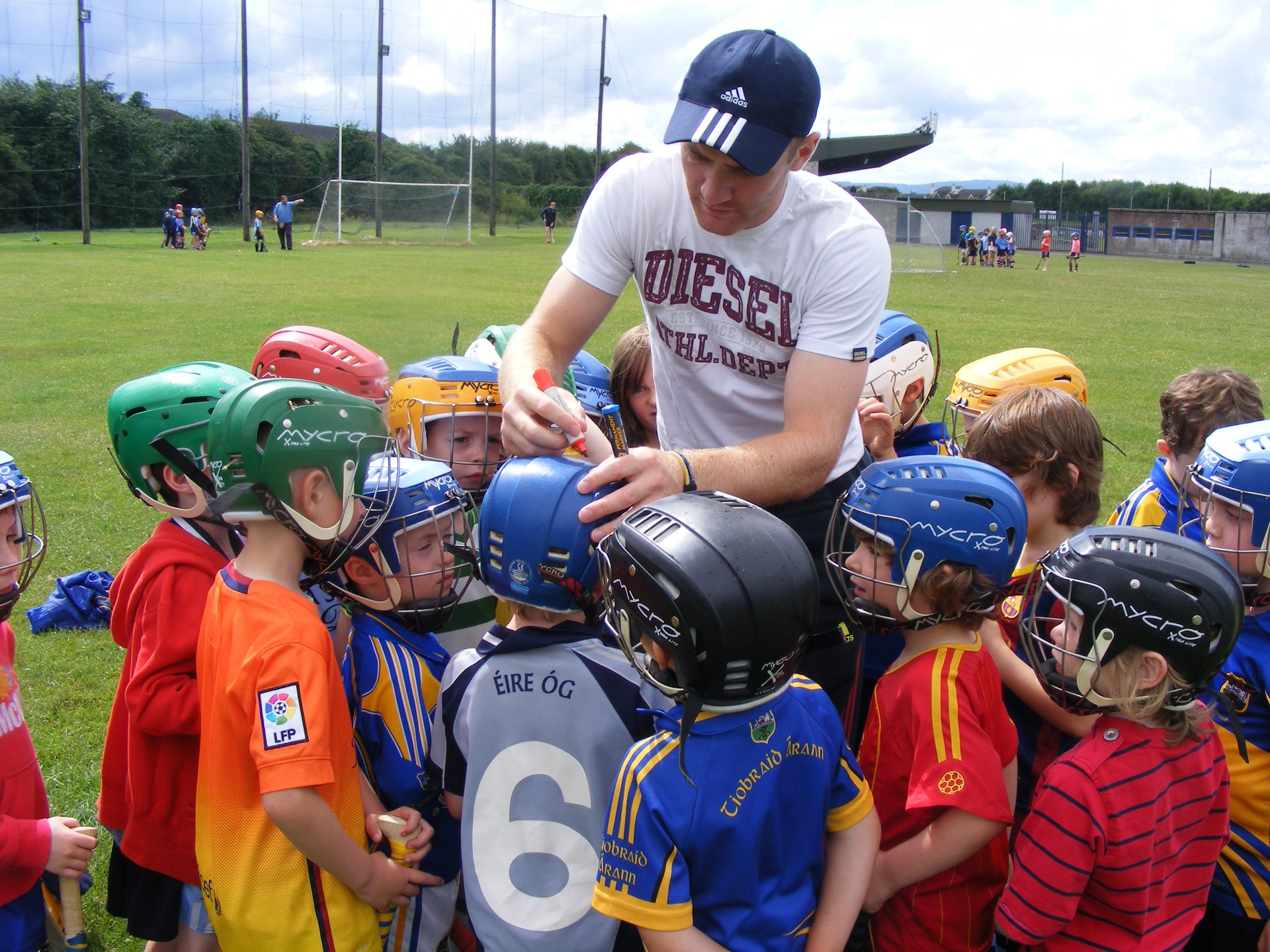 NENAGH ÉIRE ÓG will once again host its annual week of fun and activities with some great hurling thrown in for good measure! There will be plenty of action for boys and girls between the ages of 5 and 12 in a safe and well-supervised environment. Non-members are very welcome.


The summer camp is priced at €50 per child for the week with family specials of €80 for two and €100 for three or more family members. The children will need a helmet and hurley.
Text 086 0855165 with their year of birth to register your child or for more info. See you all there! 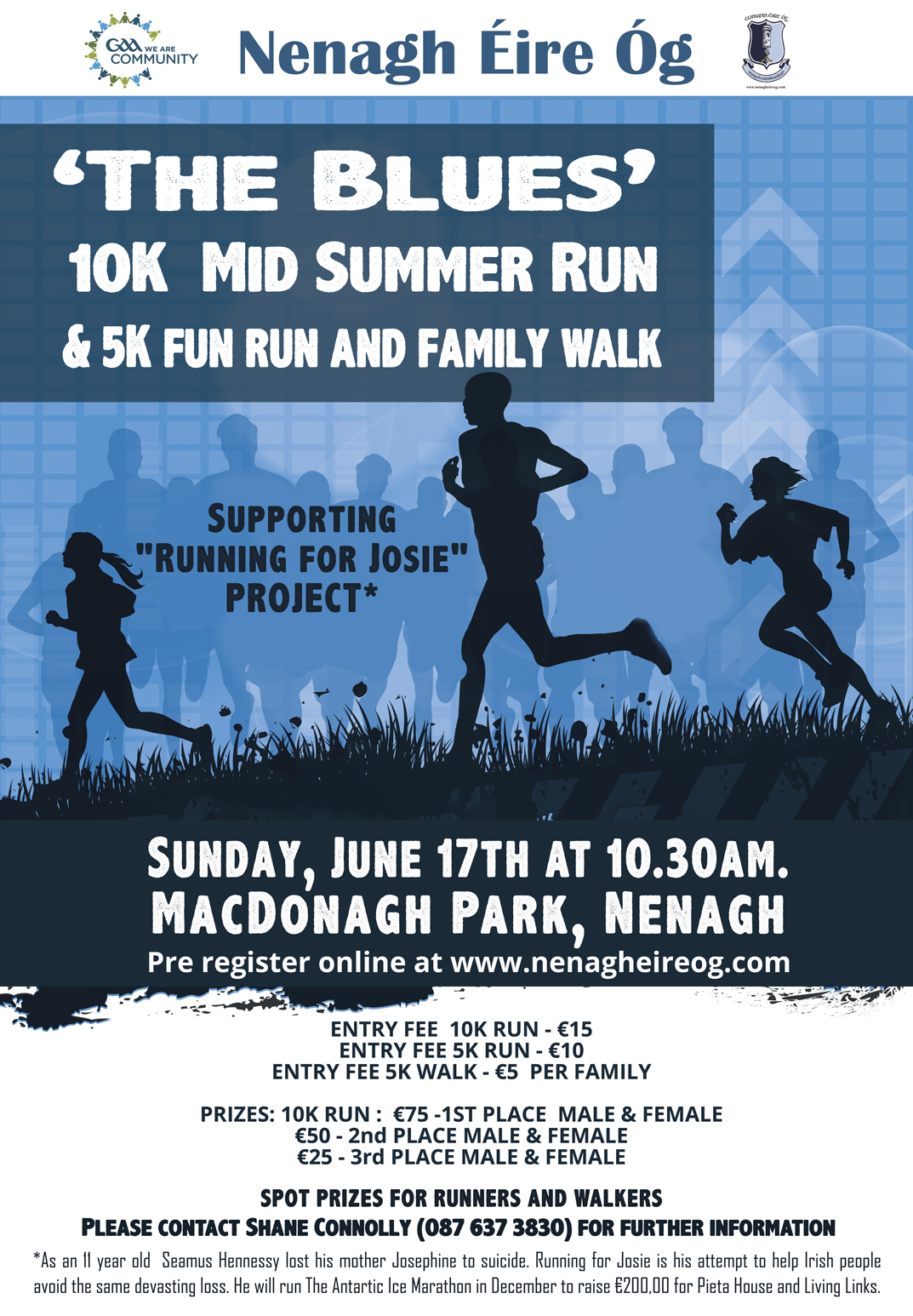 Registration is now opened for the Nenagh Éire Óg Juvenile club 10k/5k Family Fun Run which is scheduled to take place on Sunday June 17th. This year as part of the Healthy Club Project the annual run will support the worthy cause of former Tipperary hurler Seamus Hennessy who, as part of his Running for Josie campaign, is aiming to raise €200,000 for Pieta House. 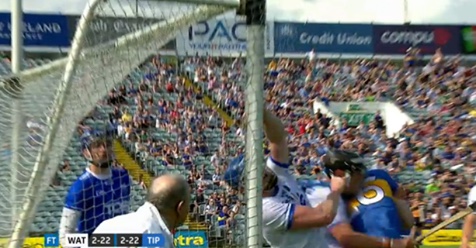 The club are delighted to announce that we are launching our new Community Friendly Lotto in June 2020.