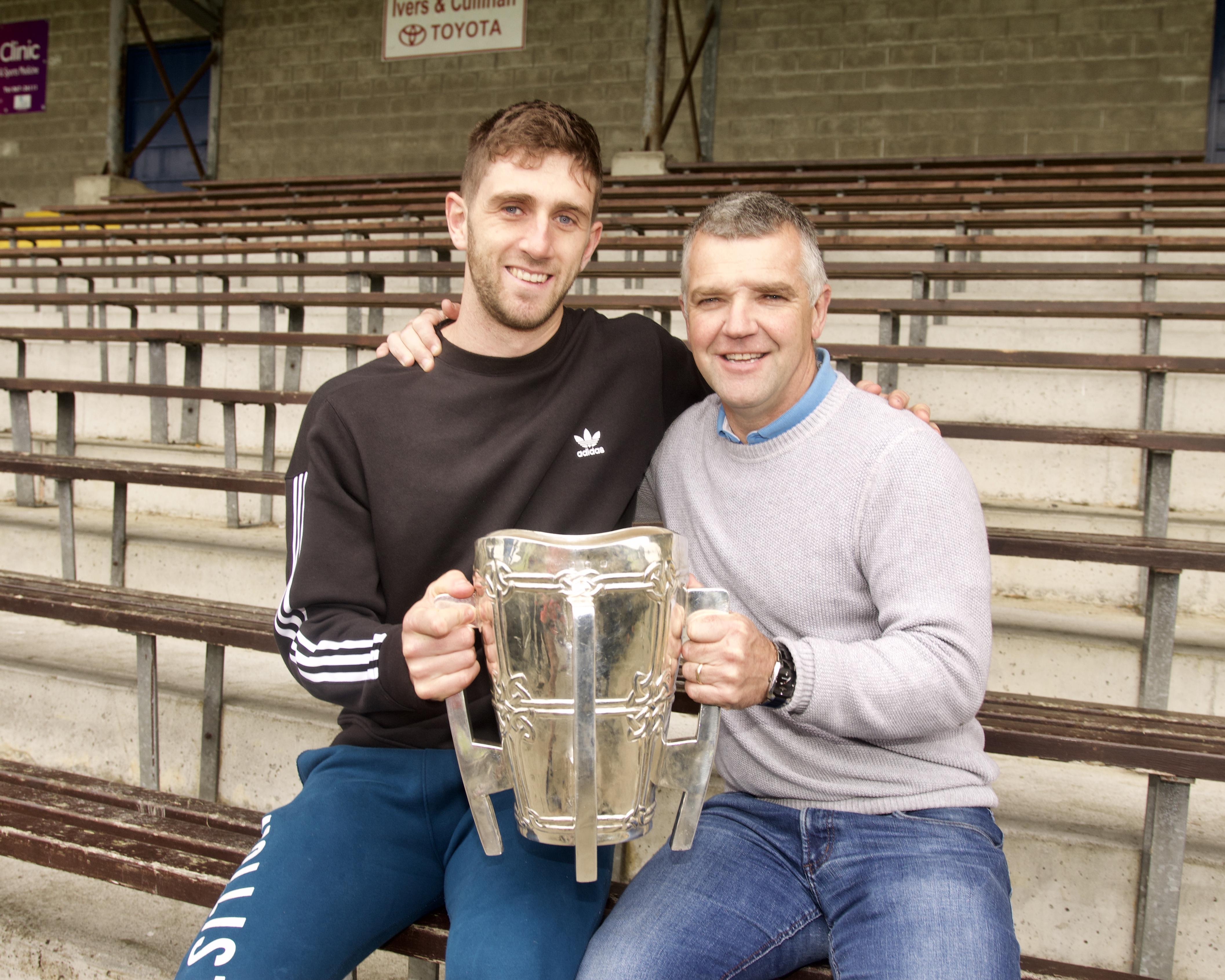 A chance to win up to €25,000 for Nenagh Éire Óg, the names of the charities who will benefit from our new community lotto are revealed while Michael Cleary makes the Guardian’s Finest 15. All this and more in this week’s news on the Blues

This week chairman John Tooher appeared on Tipp FM and revealed the charities that will benefit from the club’s new community lotto where they will receive €500 each throughout the course of the year.

To listen to John’s interview see Tipp FM’s Tweet below.

Kellogg’s GAA Cúl Camps are back with a BANG this year and they are giving you the chance to WIN cash for your Nenagh Éire Óg. There are three cash prizes to be won of €25,000, €10,000 and €5,000. All you have to do to nominate Nenagh Éire Óg is buy a promotional pack of Kellogg’s Corn Flakes, Rice Krispies or Bran Flakes. Then, select Nenagh Éire Óg using your unique on-pack code above.

Clubs must get at least 1,000 nominations to qualify for the big draw. You can pick your club again once you have a new unique code. So, rally behind your GAA club and get nominating today. Enter by 28 Aug 2020.  Good luck!

Step right up! What better way to get active in your community than with a challenge and a chance to help your local GAA club win a €2,500 O’Neills voucher. Winning clubs must have a minimum of 15 walkers joining the challenge and must be aged 18 years of age or older to participate.

The challenge will be divided across the four provinces, the club with the highest total Average steps per province will win the prize. Track your performance along the way through the MyLife leader board on the MyLife App.

The first step is to ensure your club is registered to take part, click on this link: https://mylife.irishlife.ie/gaa-healthy-clubs-2020

Track your steps* with a fitness wearable (e.g. a Fitbit) or fitness app (e.g. Google Fit for Android or Apple Health for iPhone) connected to the MyLife app. Join the GAA Healthy Clubs Challenge today! *Steps only count towards the challenge from the time you join.

Our club volunteers once again went above and beyond the call of duty this week to help the vulnerable in our community. We expressly wish to thank co-ordinators Bartley and Marion Ryan for all their work and our army of volunteers who have been shopping for groceries and collecting medicines for those who can’t venture out.

Our volunteers will continue to provide these services for as long as is required and if you need any assistance please contact club coordinator Bartley Ryan on 086 735 8359.

Michael Cleary makes the Guardian team of the last 30 years

Congratulations to Michael Cleary who was selected at number 10 on the Nenagh Guardian’s Tipperary’s Finest 15, 1989-2019. Michael, an All-Ireland winner in 1989 and 1991, was selected after winning a whopping 76% of the vote with the rest divided between Mark O’Leary (Kilruane MacDonagh’s), Gearoid Ryan (Templederry) and Dan McCormack (Borris-Ileigh).

The under-10 girls continue to practice the skills videos from Éire Óg senior hurlers Daire Quinn and Tommy Heffernan. Congratulations to Aoibh Cahill on winning a prize in the Tipperary County Camogie competition for under-10 girls. Well done to the Éire Óg girls that participated. This week the county is running a competition for the under-8 girls.

Under eight boys continue to receive two skills/drills to practice for the week ahead. This is a chance for the boys to practice their skills rather than competition. The drills will give the boys the opportunity to have their hurls in hand as much as possible by practicing the demonstrated skills for the week. We are incredibly lucky to have the input of our senior players captain, and vice-captain Daire Quinn and Tommy Heffernan showing the drills over the next few weeks. Thank you kindly to both senior players for their time and effort in supporting our under eight stars on this initiative. This week Daire was the star of the show, Daire sent the boys a video showing his chosen skills to practice for this week. Thank you to Daire for taking the time to link in with the boys. If any parent or guardian has any questions please drop a note to one of the coaches.

This week the under ten boys took part in a hurling competition. The boys were asked to submit videos of themselves completing the challenge to their coaches. There will be a prize for the best score and an open draw for all who entered for a further prize. We look forward to seeing all the skills on display from these future stars.

The North Tipperary under fourteen Lockdown League continues and Nenagh Éire Og are performing strongly with our own Cian Carmody coming out tops in the football challenge last Wednesday, congratulations Cian. Club prizes for this week were won by Kevin Liston, Conor Hodgins and Daniel Connolly, well done to all, keep up the excellent work lads. Credit must go to Paudie Malone GDA for organising this event. Both management and players are looking forward to training together in the coming weeks.

Under sixteen teams are getting training sessions recorded and sent to parents to practice skills in the garden. These recorded sessions are also posted on the Éire Og newsletter for anyone to revisit. Seven different sessions have been sent out to date and a new session will issue this week.

Thank you to all the parents who encourage and support practicing our games at home each day, this is central to the children maintaining and developing skill levels and ultimately the enjoyment of our games. It is so important that the children do some practice at home to help them enjoy group training and blitzes when they eventually return. In addition, it would be fabulous to see the home coaching translate into an increased number of coaches within the club in the future.

Watch as Jake Morris sets a challenge for the Lockdown League. In this video has challenges the juveniles of the county to see how many squat jumps they can do in a minute

Blast from the Past – 1924 Tailtenn Games

The above photograph shows the Irish team that competed in the 1924 Tailteann Games and among them are two of our own, brothers Mick and Jack Darcy who both won All-Ireland medals in 1925 with Tipperary. Indeed, 1924 was an extra special year for Mick as he captured All-Ireland honours with Dublin before returning home to the Premier county.

These games were a celebration of Irish culture and sport held every four years, from 1924 to 1932. It was seen at the time as a revival of the ancient Aonach Tailteann games which were held in Ireland from the 6th to the 9th century and disappeared not long after the Norman invasion and subsequent suppression of Gaelic culture and it was inspired by the Olympic games which were also a revival from ancient times. They were originally held to honour Queen Tailté, who sat at the royal palace on the hill of Tara and all the men of Erinn admired her for both her beauty and accomplishments. Throughout her reign, Ireland was a beacon of peace and harmony. The games were discontinued after Fianna Fáil came to power in 1932 as they viewed them as a Cumann na nGaedhael project.

Croke Park was headquarters for the games and anyone of Irish birth or decent was welcome to participate. It was hoped that these games would unite Gaels scattered across the world. As the games were held not long after the summer Olympics, the top athletics from around the globe participated in the many events which included hurling, chess and soccer.

In hurling Ireland, USA, Wales, England and Scotland played while there was also a hurling-shinty compromised rules game played which Scotland won 2-1. Camogie was supposed to feature also but after a dispute, the Camogie Association withdrew accusing the organisers of having a Free State bias.