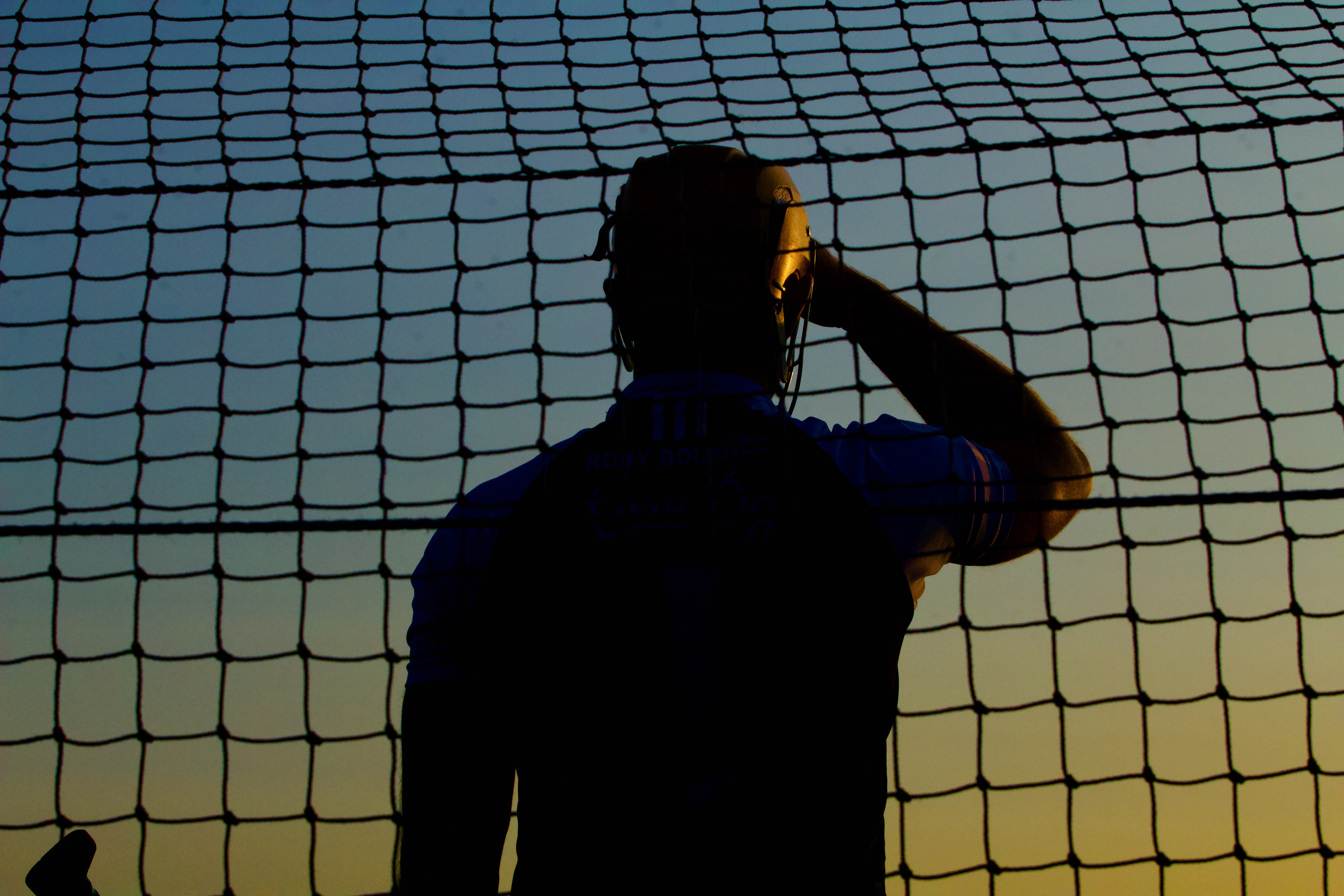 The club’s summer camp is a massive success, Nenagh play Gort in the John Tucker Cup while it’s a week to remember at inter-county level for our lads involved. All this and more in this week’s news on the Blues 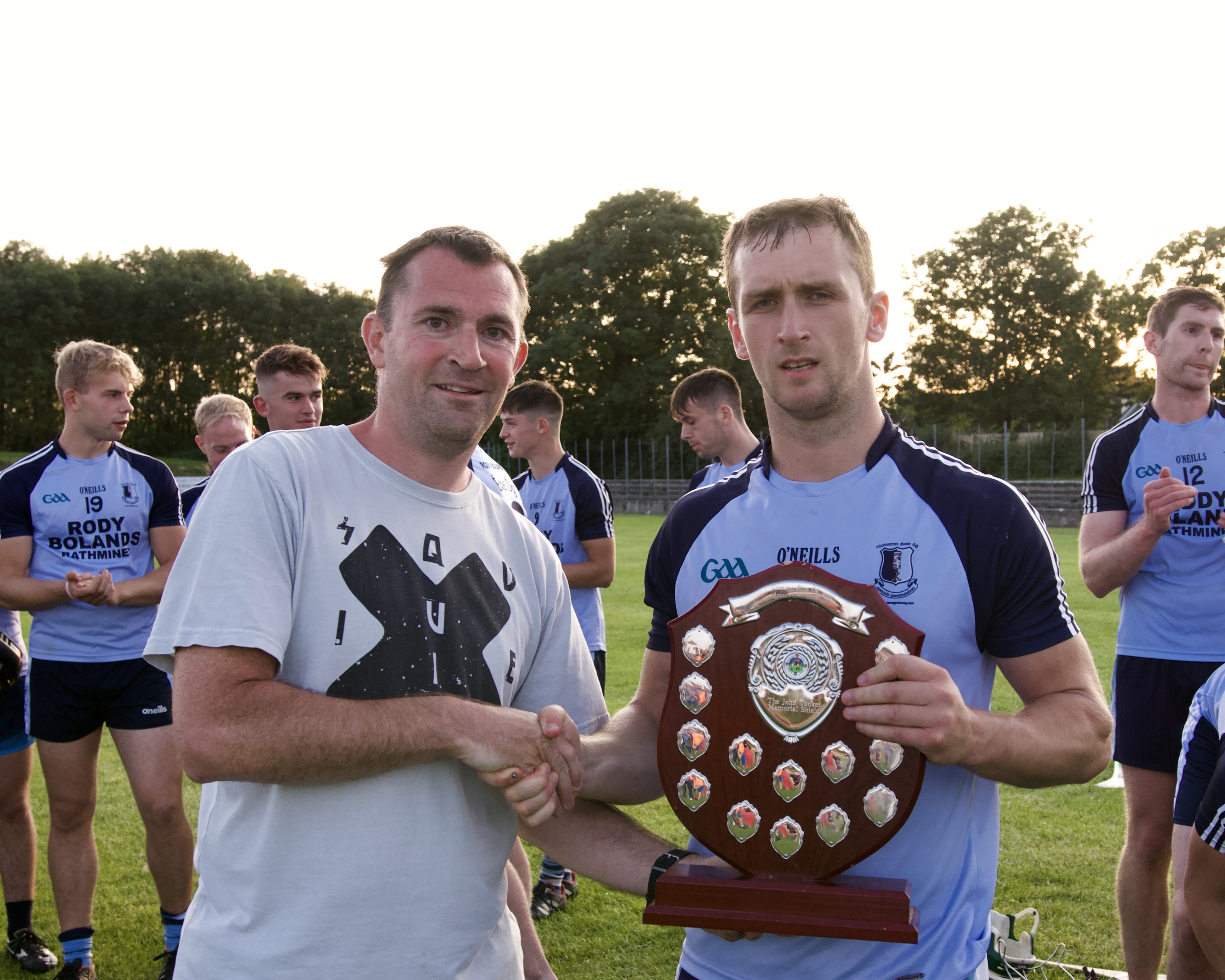 On Saturday evening the club remembered one of the greatest Nenagh Éire Óg men, John Tucker, with the playing of the John Tucker Cup in MacDonagh Park as we welcomed Gort for a senior hurling match with the Blues winning out in what was a sporting and entertaining contest. John played hurling and Gaelic football for the club for many years and once his playing days were behind him, he coached numerous underage and adult teams winning a myriad of trophies along the way. His influence on the youth of the parish cannot be overstated as he mentored them not just in the skills of Gaelic games, but he taught them many life skills which has helped them develop into the adults they are today.

We wish to thank Gort for travelling down to play us, referee Michael Murphy as well as Andy’s Bar for the delicious catering afterwards. We also want to pay a special tribute to our under-10s who played exhibition matches at half-time which had the huge crowd enthralled and amazed at their fantastic skills. 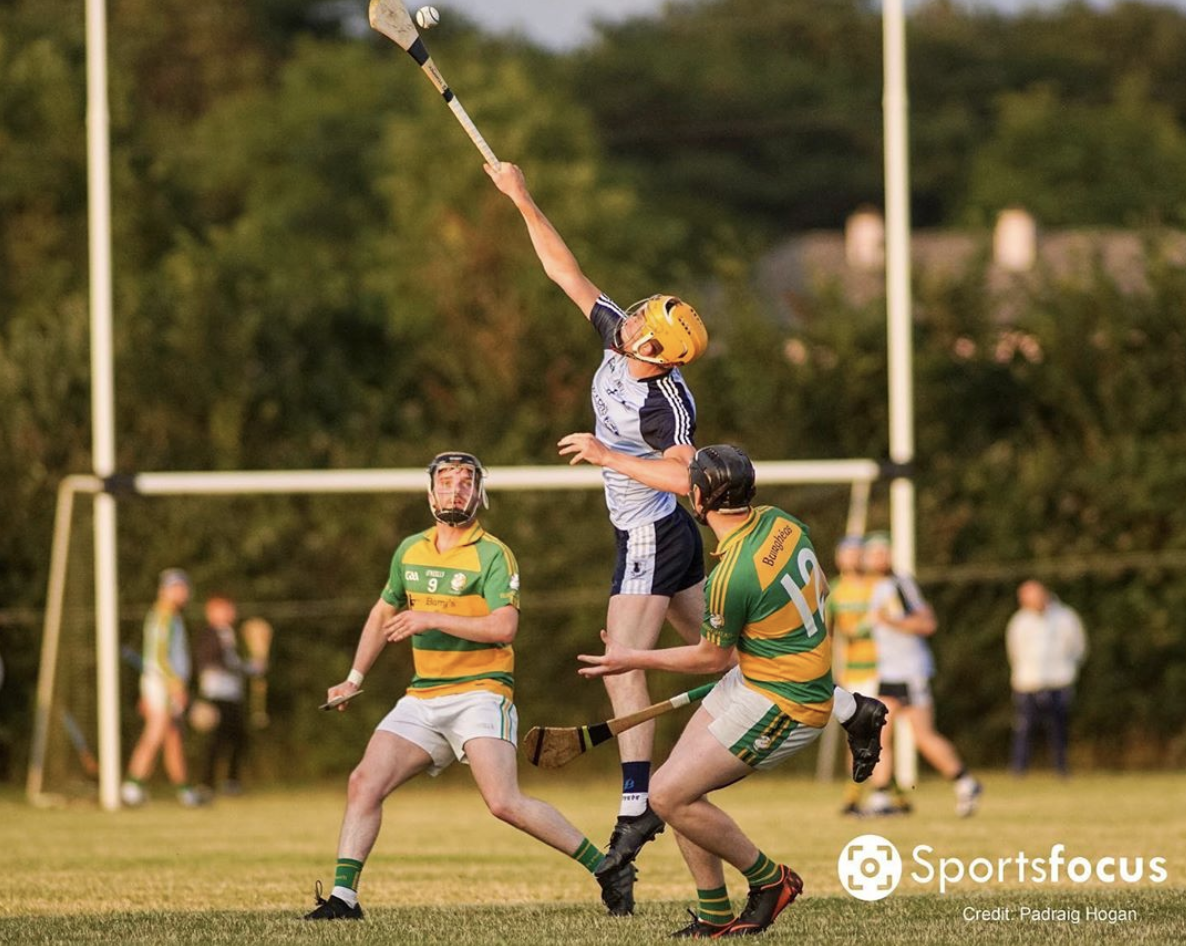 Our junior hurlers continued their rich vein of form with a 1-22 to 1-13 win over Burgess in Puckane on Friday evening last in the championship. They play Toomevara this Friday evening in Moneygall at 7pm in the final game of the round robin series. 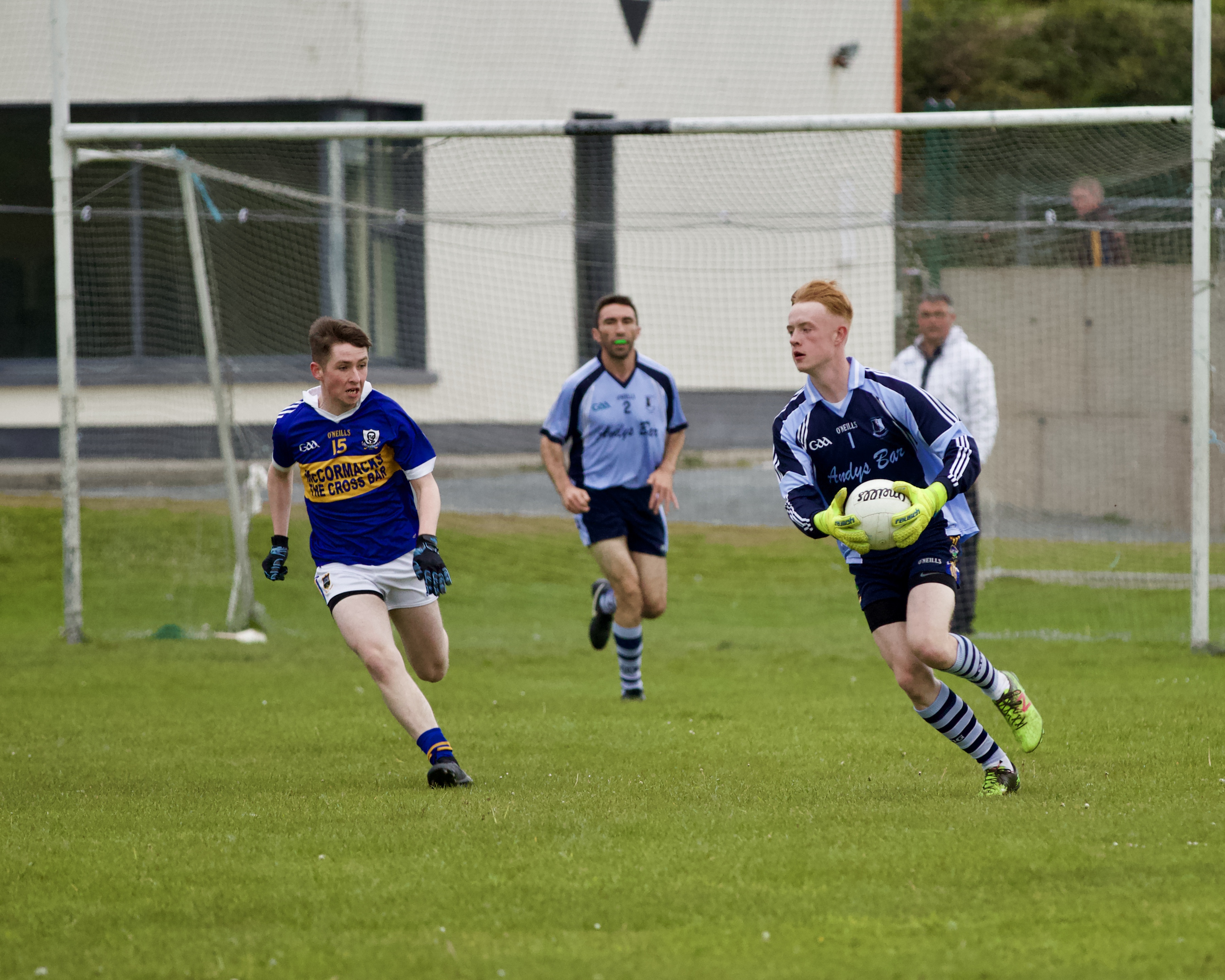 Our junior footballers are back in championship action on Saturday evening when they face Galtee Rovers/St Pecaun in The Ragg at 7:30pm while they face Éire Óg Annacarthy the following week. 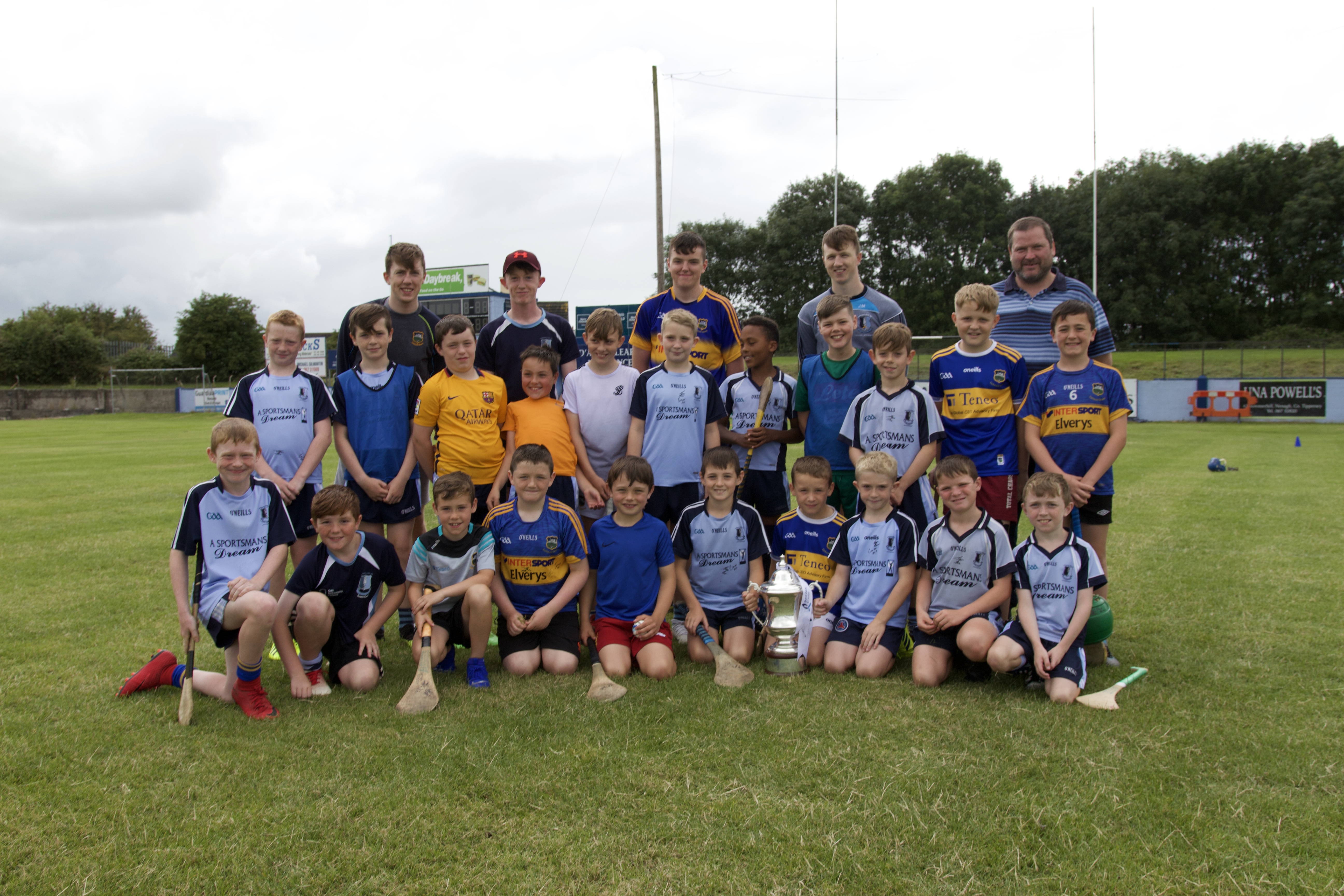 The club’s annual summer camp, held this week, was once again an amazing success with huge numbers of boys and girls participating in an action-packed, fun-filled week of Gaelic football and hurling action. The club wishes to thank all the organisers for the trojan work they put in to once again ensure the camp’s success. The diligent coaches worked extremely hard while the participants were an absolute credit to their families, arriving everyday with big smiles and positive attitudes ensuring that everyone had a great time. We were delighted when Munster under-20 champions Conor McCarthy and Jake Morris arrived with the trophy in hand to meet all the children and happily sign autographs and pose for photographs. All the photographs taken over the week can be viewed on our Facebook page. 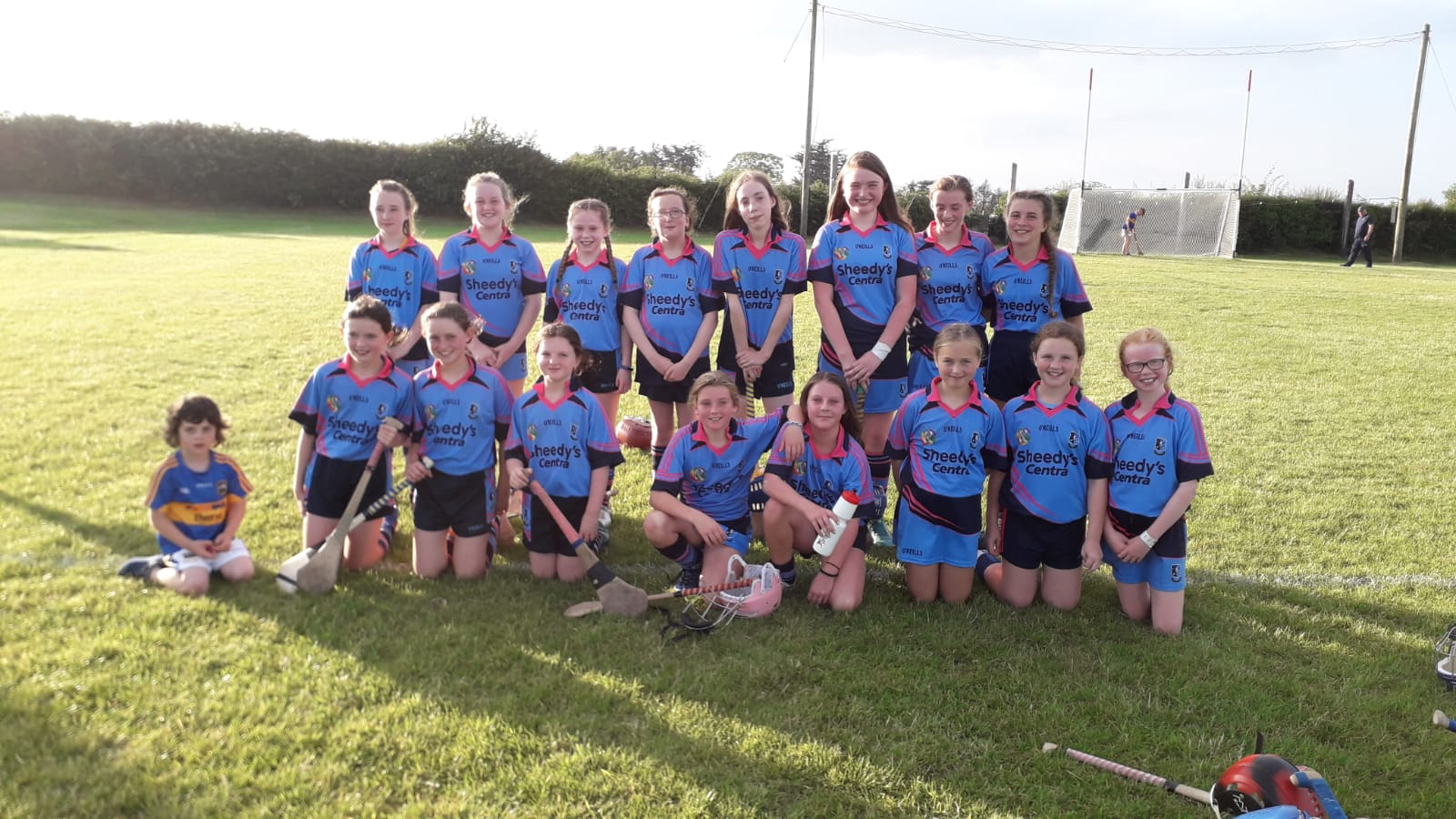 Under-12
Our under-12 girls qualified for the quarter finals of the under-12 County League thanks to a very hard-fought win over Portroe last Tuesday evening. Drawing the game at half time, the girls had to dig deep to get the win. Training continues on Monday and Thursday.
Under-10
Our under-10 girls played a county blitz in Kiladangan GAA club last Saturday. They played teams from Borrisoleigh, Kiladangan, Burgess, Shannon Rovers and Kilruane MacDonagh’s. Training returns this week after the summer camp last week. The girls are playing in a tournament in Kilruane on Monday 4th August to mark the 50th anniversary of the club.

Summer camp
100 children took part in the Éire Óg annual summer camp. Jake Morris and Conor McCarthy visited the camp on Friday with the Munster under-20 cup. Great fun was had by all. There will be a Cúl Camp in the club from August 19th to August 24th. There are already 100 children booked in so anyone looking to take part should book asap to avoid disappointment. Bookings are through the county board.

Cúl Camp
There will be a Cúl Camp in the club from August 19th to August 24th. There are already 100 children booked in so anyone looking to take part should book asap to avoid disappointment. Bookings are through the county board website. 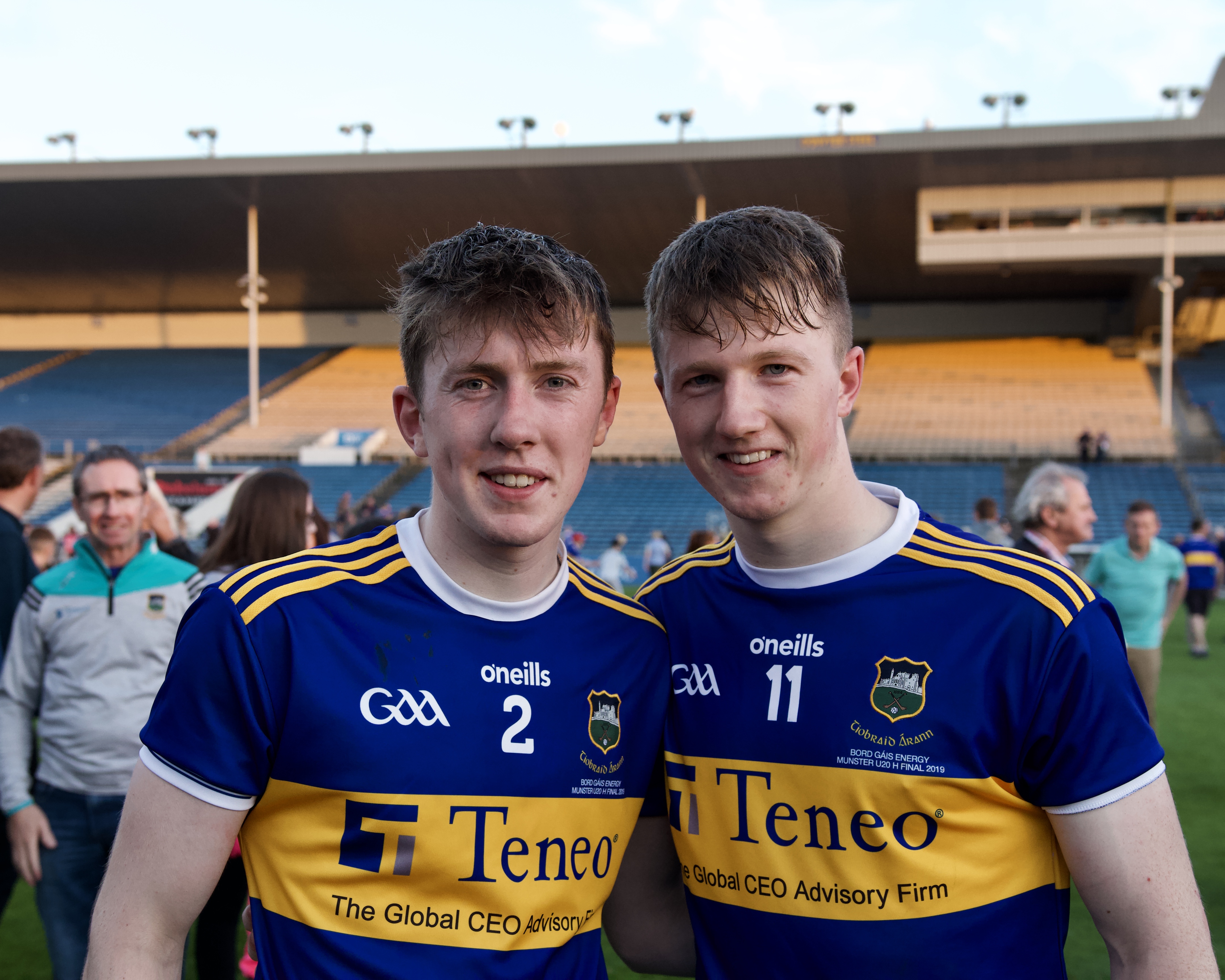 Two proud Nenagh men, Conor and Jake after the game

Fans of WWF wrestling in the 1990s will remember the iconic Jake “The Snake” Roberts who’s trademark move, the “DDT”, involved him grabbing his opponents in a headlock before smashing them into the ground for the decisive stunt that won him the bout. There’s no doubt that the Cork under-20 hurlers felt that they had been the victim of a similar move after our very own Jake “The Snake” Morris popped up for the winning goal, with only 21 seconds remaining, to spark euphoric scenes as Tipperary captured the Munster title in Semple Stadium on Tuesday last. And while Jake rightly grabbed all the headlines, at the other end of the pitch Conor McCarthy, who had a superb game, went about his business in an effective and efficient manner as he thwarted numerous Cork attacks from corner back. It was clear what it meant to people from our club as both men were engulfed by familiar faces at full time. The lads must now prepare for the All-Ireland semi-final against Wexford.

Another group waking up this morning after a venomous bite from Jake “the snake” Morris are the boys of Wexford after Tipperary’s stunning 1-28 to 3-20 win in the All-Ireland senior semi-final. Jake was introduced as a second-half substitute and should have finished with 1-1 to his name but the goal was bizarrely ruled out however his point, Tipperary’s last score of the game, was a thing of beauty. At the other end of the pitch Barry Heffernan played a stormer, repelling numerous Wexford attacks and regularly bursting forward to set the Tipp forwards on their way. Barry was unfortunate not to have a point to his name after Hawkeye deemed his brilliant first-half effort went over the post.

The lads are now preparing to meet Kilkenny in the final in three week’s time and the County Board have revealed that there will be an open training session this Wednesday in Semple Stadium from 7pm to 9pm with the meet and greet beginning at 8:15pm.

Jake Morris puts the nail in the coffin with this catch and point! Superb performance by @TipperaryGAA pic.twitter.com/pf90BIe6CE 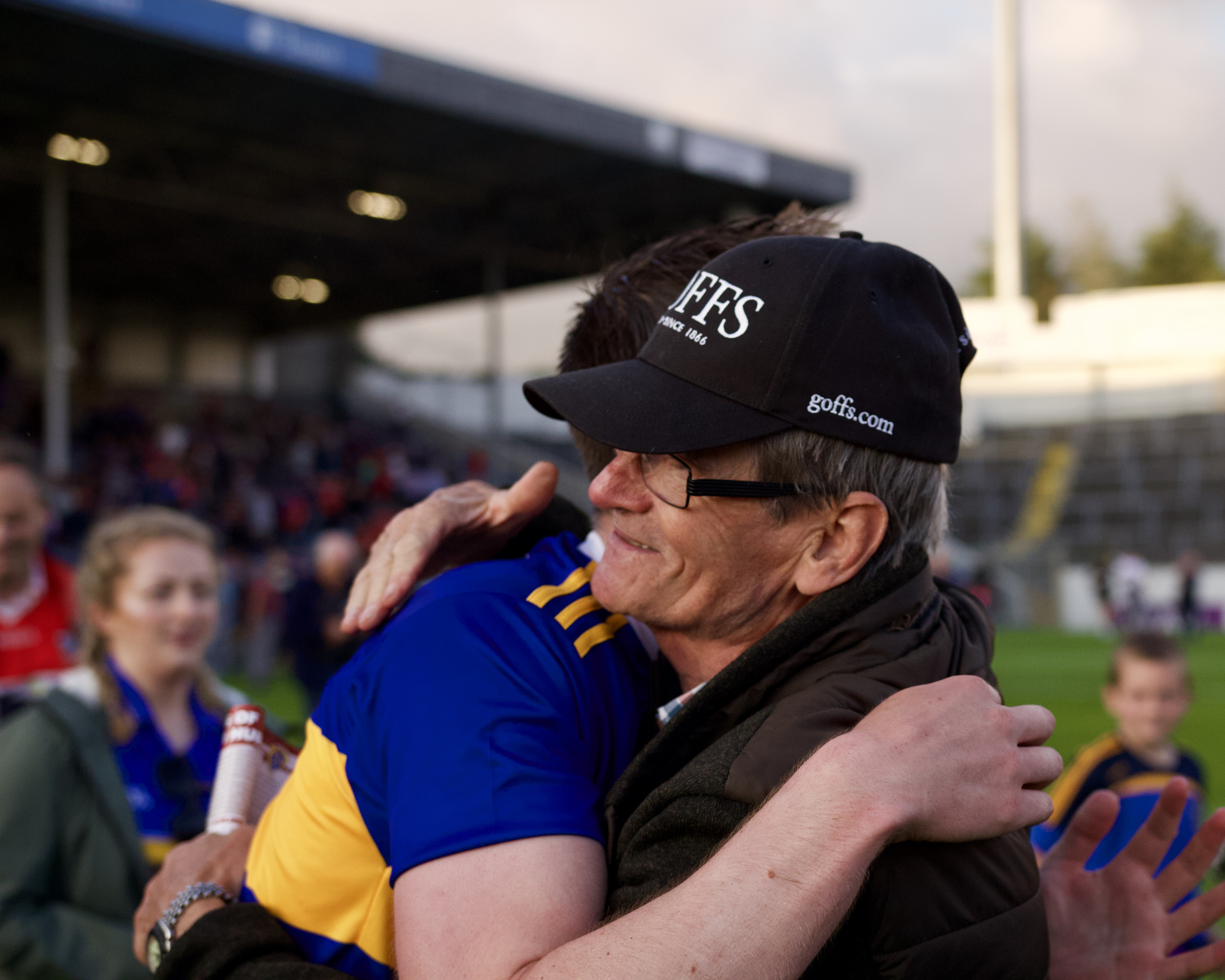 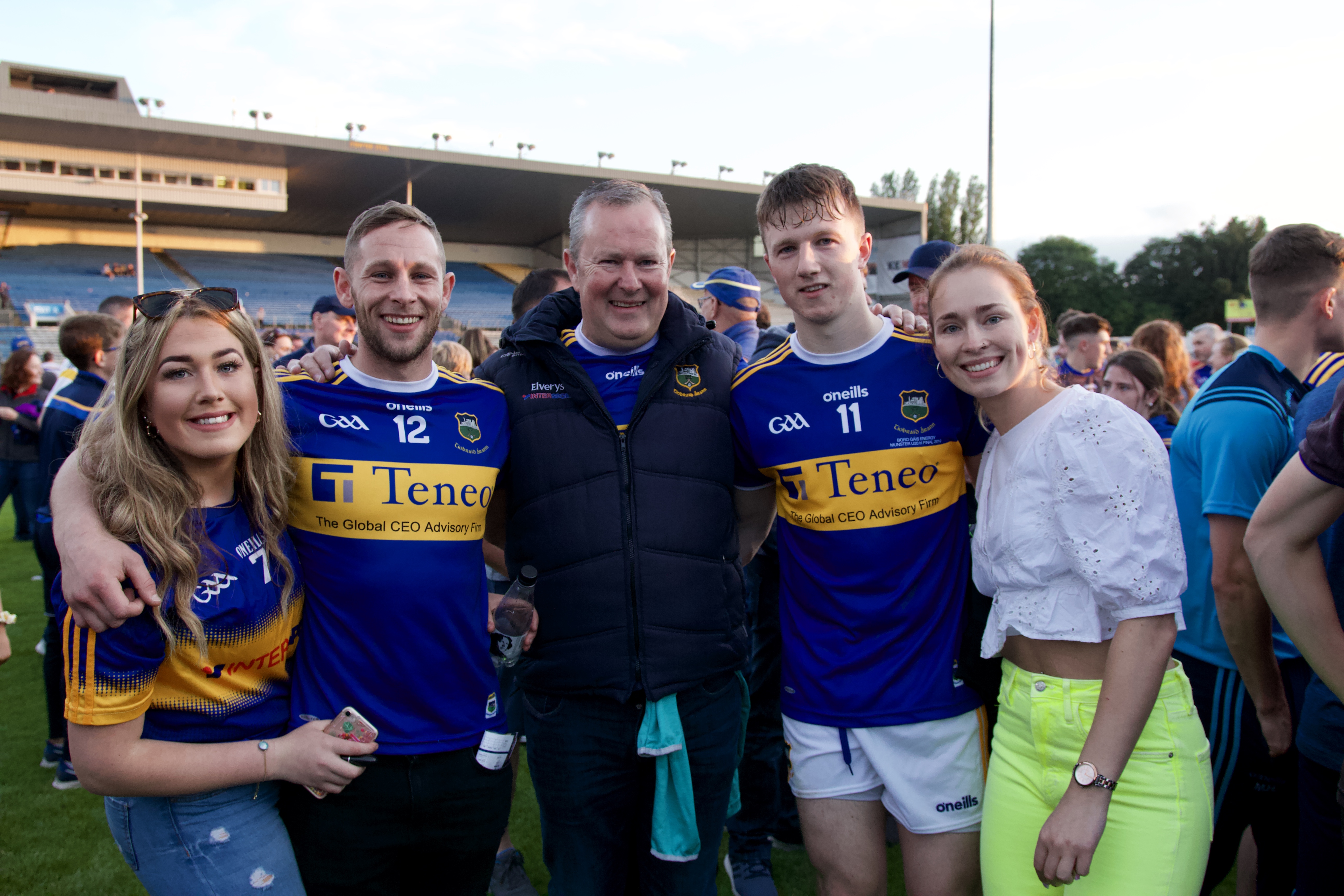 Jake surrounded by his proud family

It was amazing to see that Jake Morris was trending on Twitter Tuesday evening last following his dramatic injury-time goal against Cork even beating Love Island into fourth place!

Jake Morris with a match winning goal for Tipperary! pic.twitter.com/KIJonrcA7o 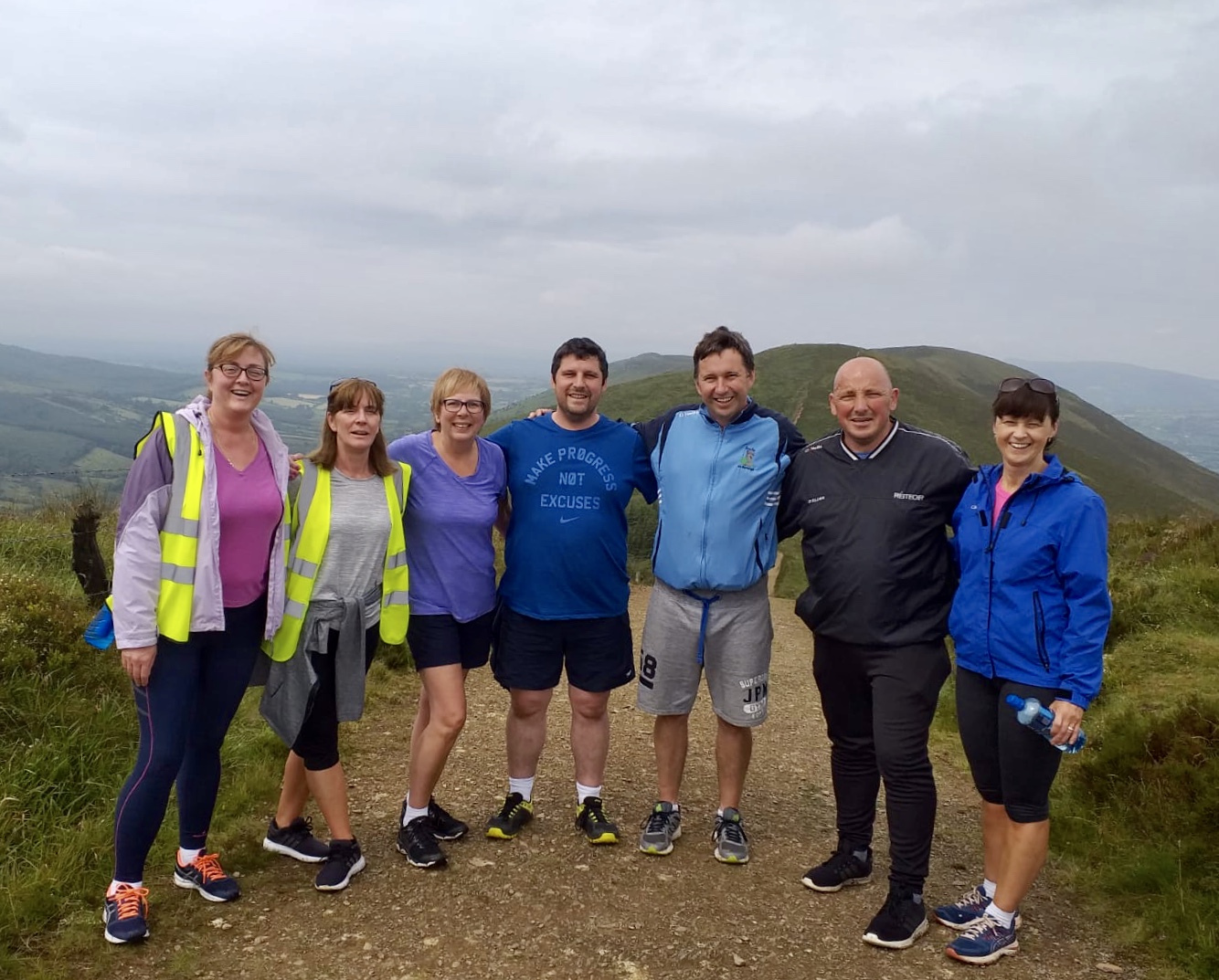 Nenagh Éire Óg walking group are climbing Croagh Patrick to raise funds for Milford Hospice on Bank Holiday Monday and all money raised will go directly to Milford Hospice. All expenses incurred during the walk will be paid for by the walkers. This is a fantastic cause that aids so many in North Tipperary.

If you would like to donate to this worthwhile organisation please click the Go Fund Me link here. https://www.gofundme.com/nenagh-eire-og-croagh-patrick-walk 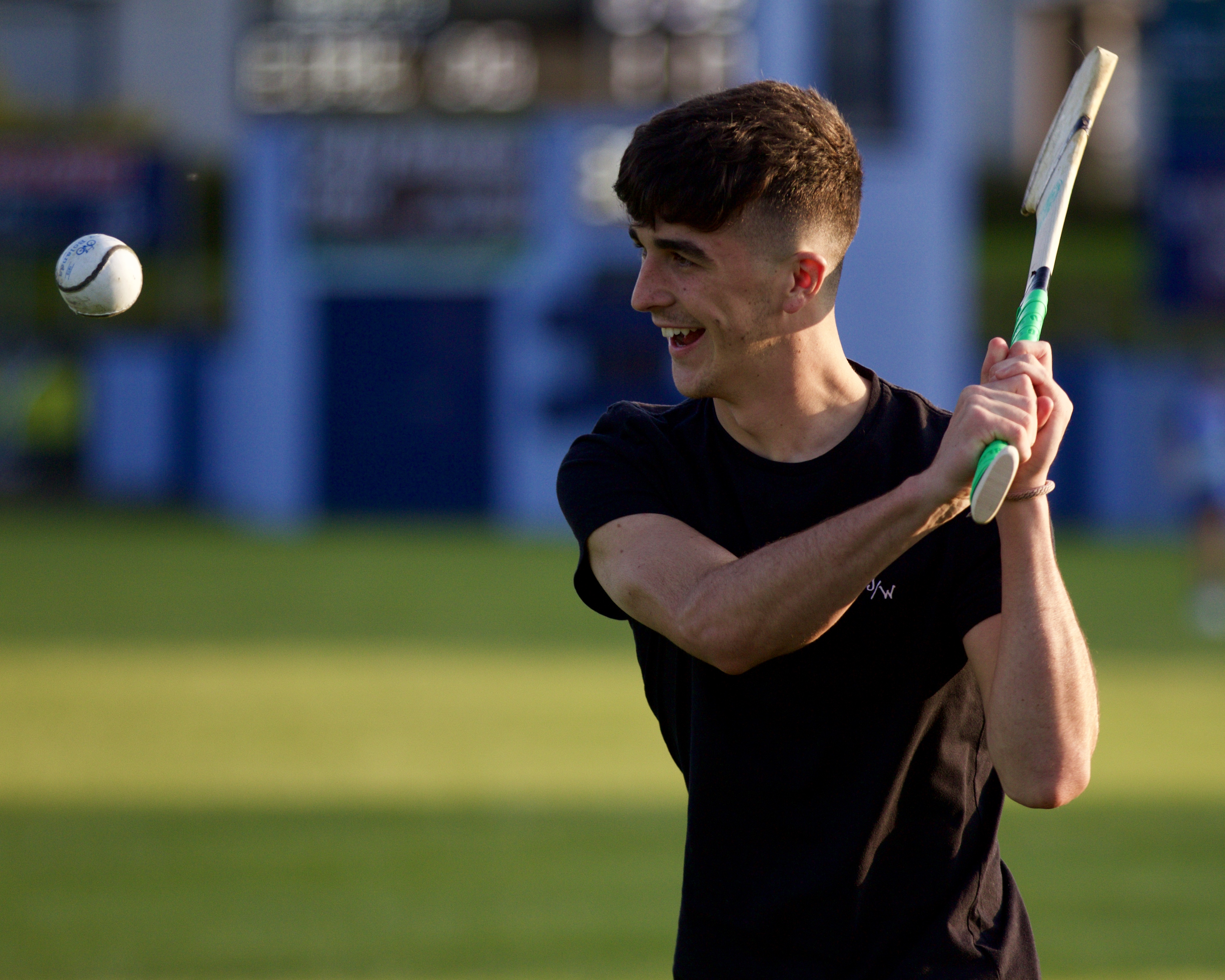 Former Nenagh Éire Óg and current Celtic FC and Republic of Ireland soccer player Barry Coffey made a welcome return to MacDonagh Park on Saturday evening for the John Tucker Cup and it’s clear from his half-time puck around with Jake Morris that he still has the Midas touch. We can’t wait to see Barry again the next time he visits Nenagh. 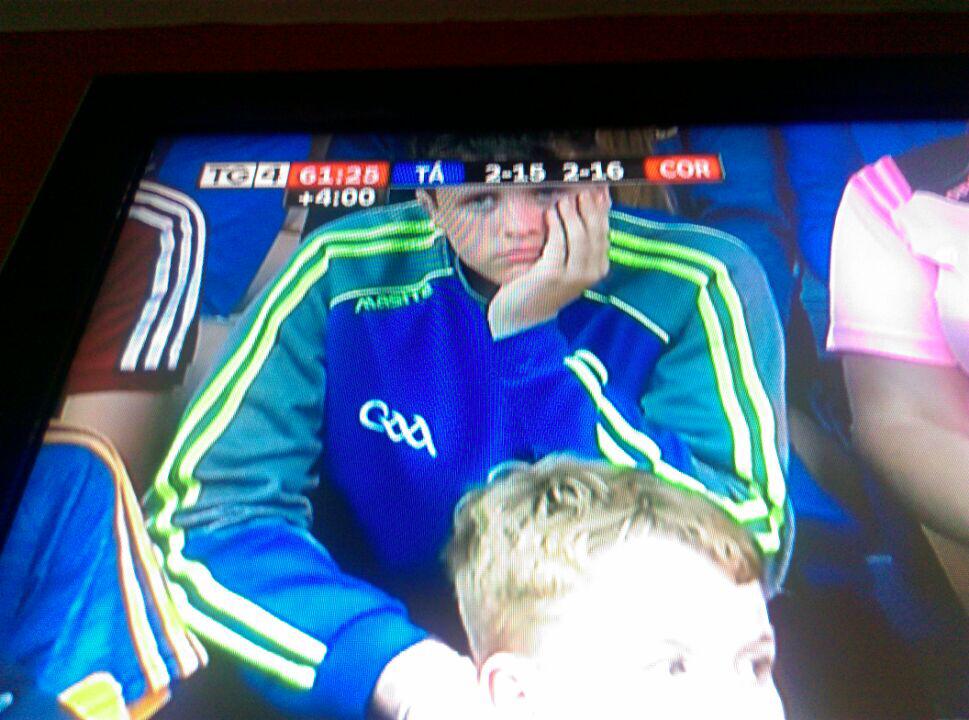 “The sun come up, it was blue and gold” Tom Waits
Shane Hennessy in goals during the John Tucker Cup