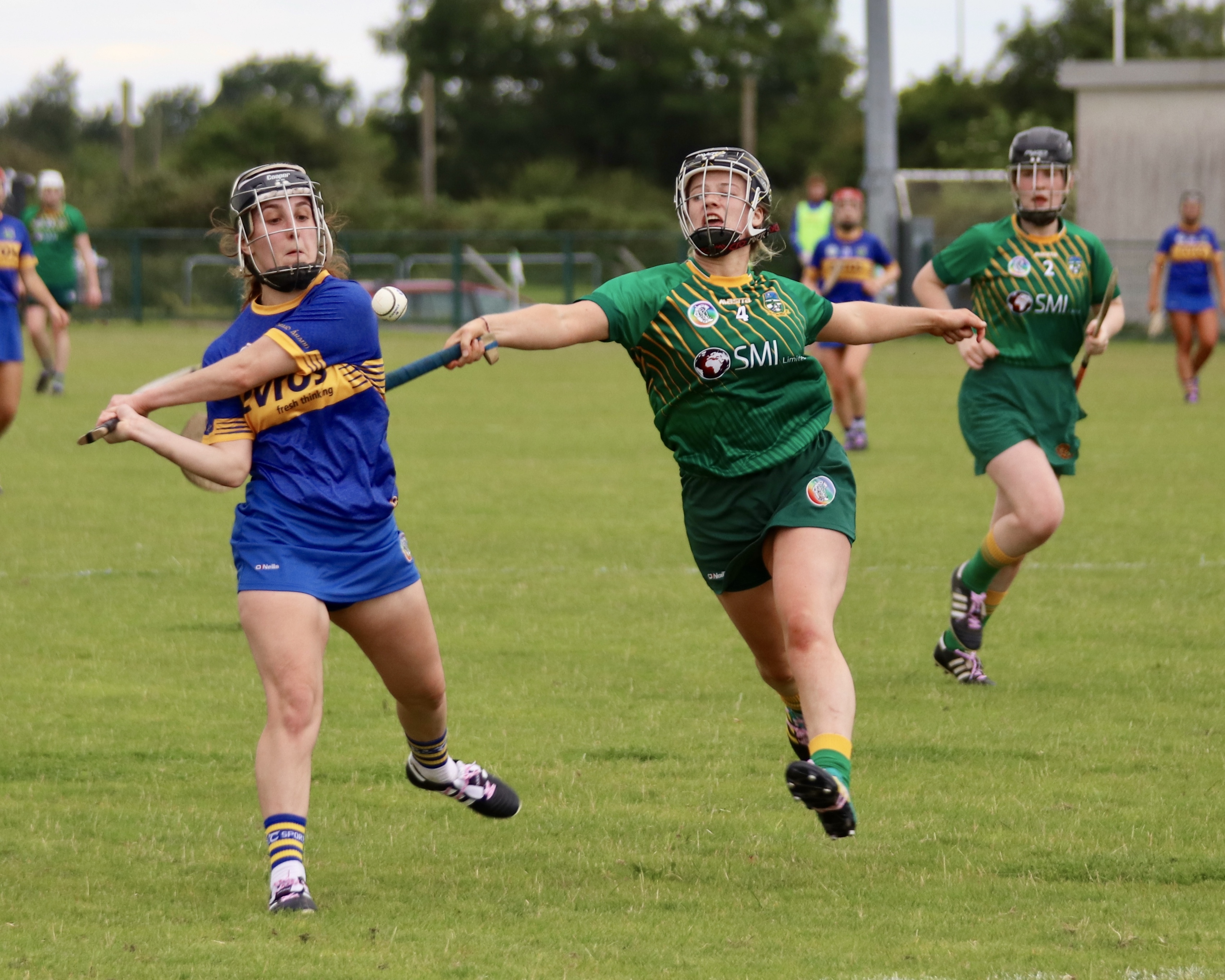 Willie’s winning matches, details of our exciting 2019 summer camp and the Street Leagues are a major success. All this and more in this weeks news on the Blues

Our junior-A hurlers play Burgess on Friday evening in Puckane at 7:30pm in the next round of the championship

Our minors were defeated by Toomevara in the North Tipperary championship on 0-13 to 2-14 during the week. They play Roscrea on Wednesday evening at 7:30pm in St. Michael’s Park, Toomevara. 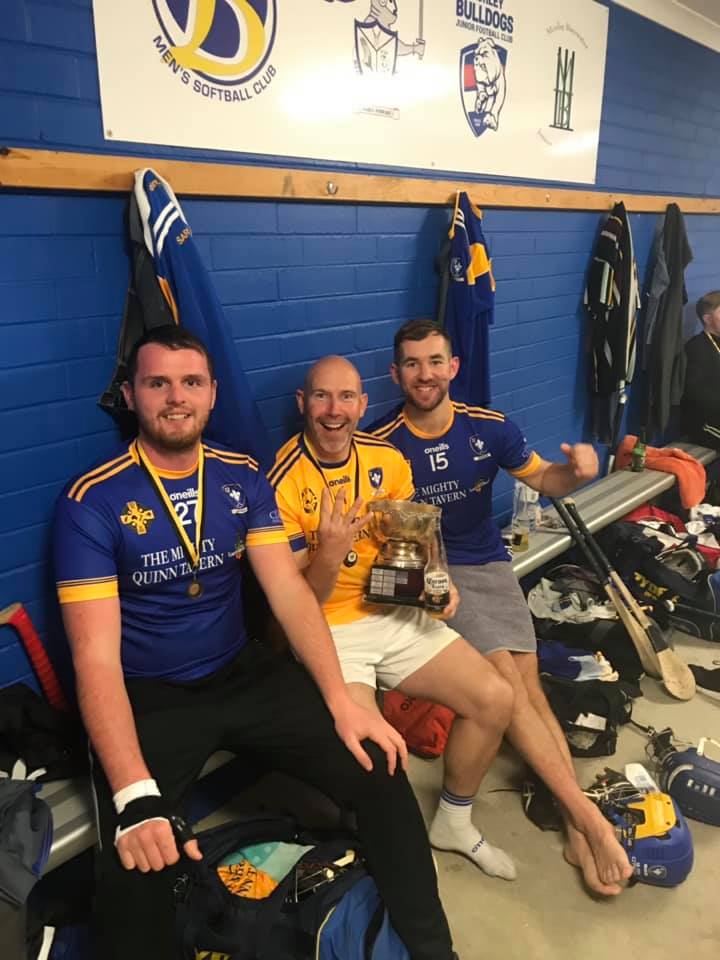 Congratulations to Willie Bolger and Sarsfields Hurling Club in Western Australia who beat Western Swans, 1-20 to 1-10, in the county final on Saturday last. Willie is after building up a fine collection of championship medals on foreign fields in recent years. Keep up the great work Willie.

Another true blue winning championships abroad is Danielle Harrington who won the British junior camogie championship on Saturday with Brother Pearse Camogie Club over Green Isle in McGovern Park, Ruislip 6-9 to 2-4. Danielle brought her amazing form across the water with her banging home five goals in the final.

We also congratulate Barry Coffey who scored the all important goal for the Republic of Ireland in the European under-19 championships against the Czech Republic and secured Ireland’s place in the semi-final against Portugal.

Congratulations to Barry, Willie and Danielle from everyone in the club. 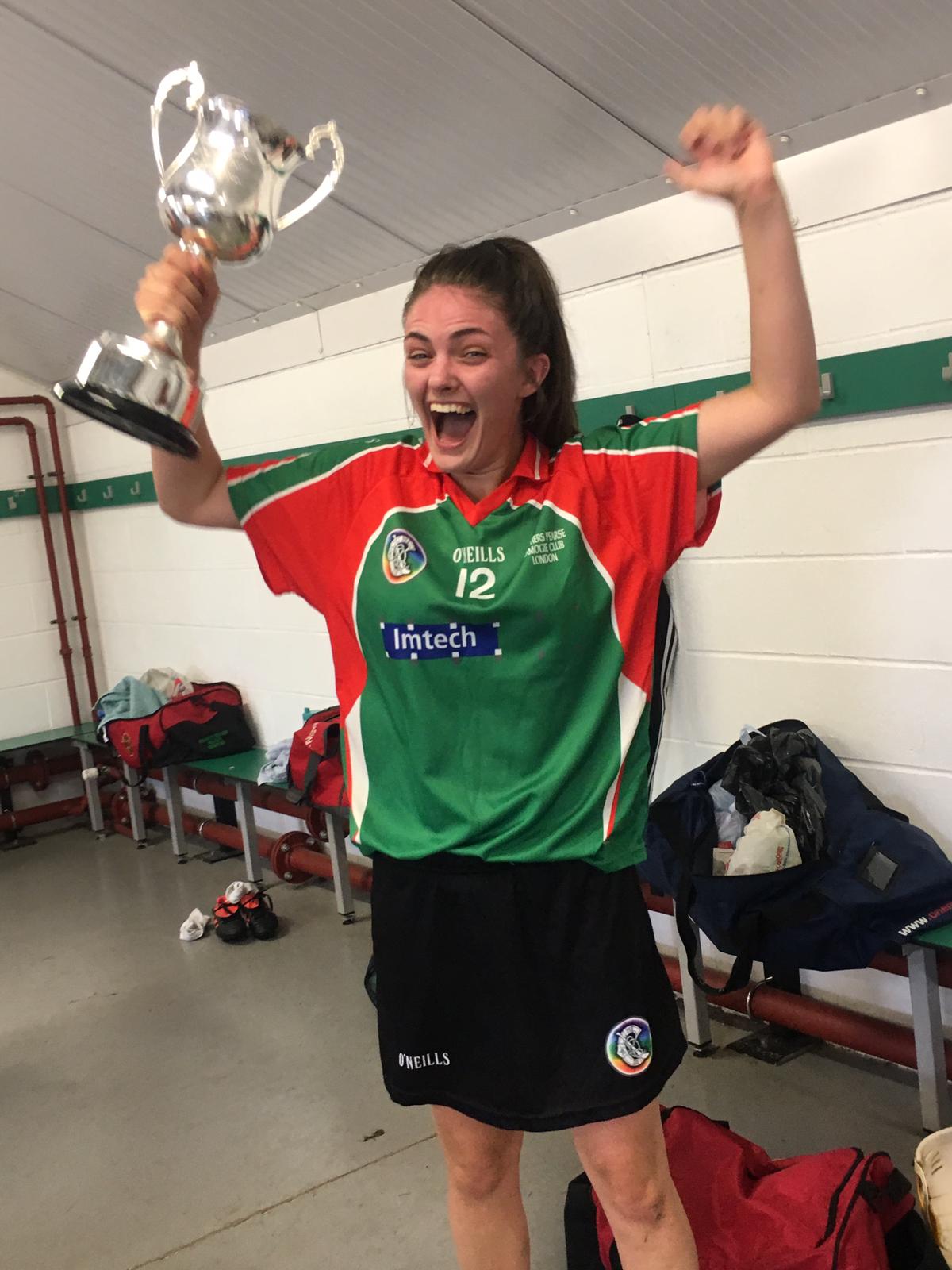 The under-12s played Drom & Inch on Monday evening last and won comprehensively 7-3 to 0-0. Best of luck to the girls in the last group stage game which is on Tuesday evening at 7pm in Portroe.

The under-10s played a match against Shannon Rovers in Ballinderry Friday night. There will be no training this week due to the summer camp. There will to be a county blitz next Saturday 27th July in Kiladangan at 9.30.
Nenagh Éire Óg under-10s who played Shannon Rovers recently

The under-6s played their first games of the year against Toomevara and performed magnificently,  as did our under-8 girls. Thanks to Toomevara for hosting. No training this week due to the club summer camp.
Nenagh Eire Og under-8s who played Toomevara in a mini blitz recently.

O’Brien has fine performance for Tipperary

Nenagh Éire Óg’s Grace O’Brien started at centre forward for Tipperary over the weekend when they played Meath in Ashbourne. O’Brien scored five points (three frees and two from play )and Tipperary have qualified for the All-Ireland quarter-final which will be played in Semple Stadium on Saturday the 3rd of August. Best of luck to all involved.
We extend our best wishes to both Conor McCarthy and Jake Morris as the Tipperary under-20 hurlers play Cork on Tuesday evening in the Munster final.
We also wish Jake Morris, Barry Heffernan and the Tipperary senior hurlers the very best when the play Wexford on Sunday in the All-Ireland semi-final. 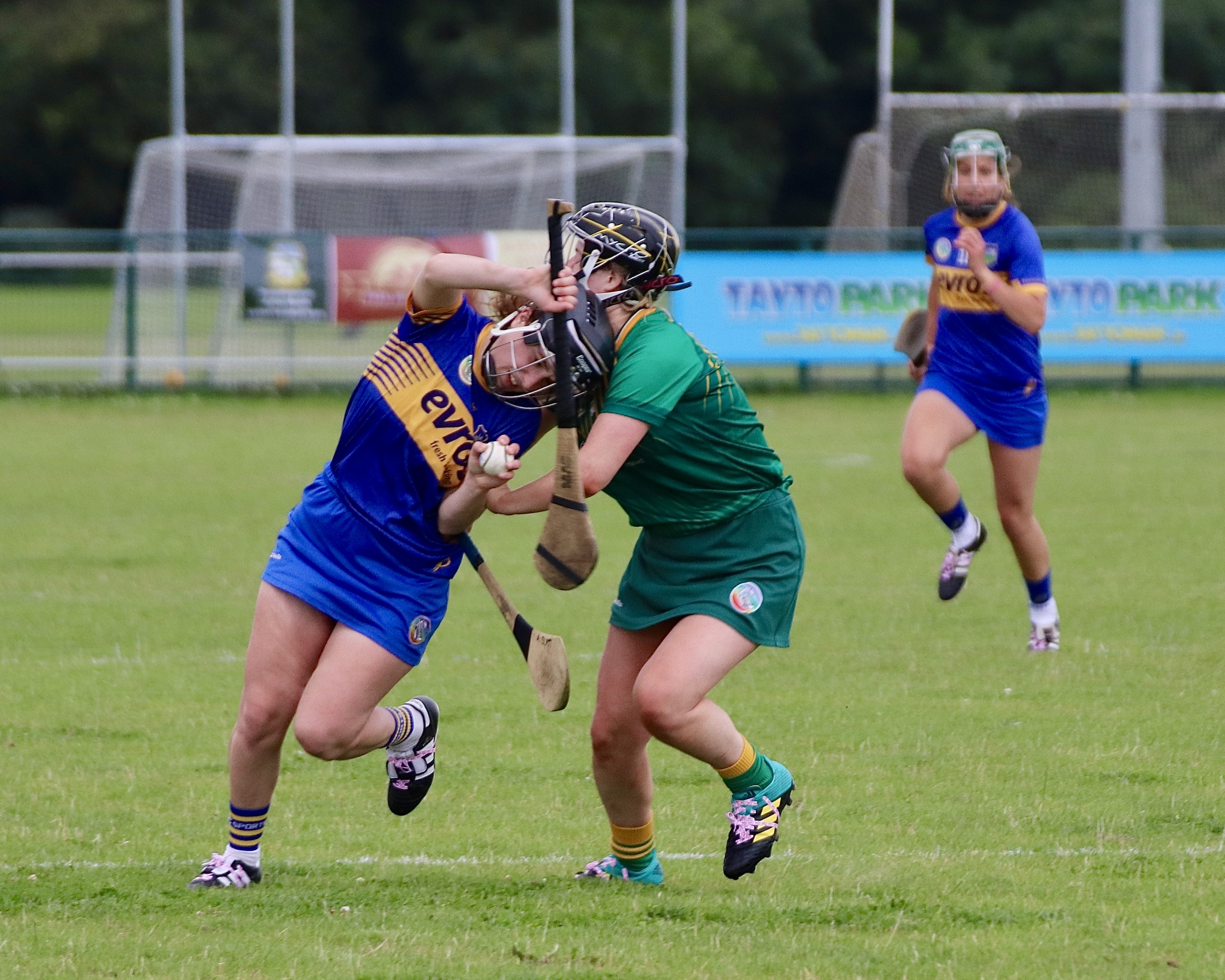 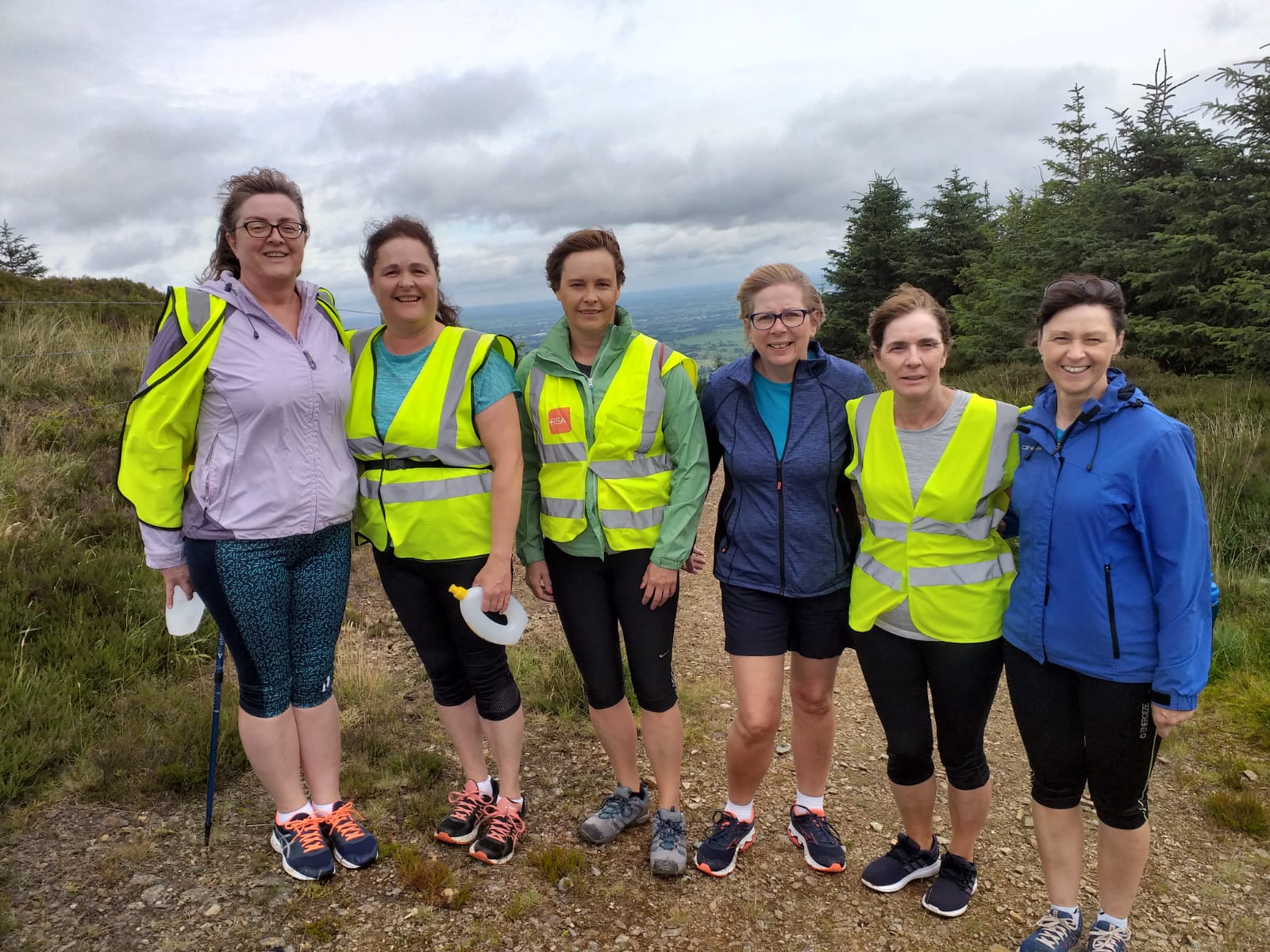 Serving North Tipperary, Limerick and Clare, Milford Hospice provides the highest quality of care to patients, family and friends in areas of palliative care and services to the older people.

We are going to climb Croagh Patrick with the aim of raising much needed funds for this incredible organisation. Those that are climbing are Fiona Kenneally, Colette Carey, Martina Cahill, Mary Murphy, Jackie Holland, TP Sullivan, Enda O’Sullivan, Elaine McWeeney and Bernie Gratton.

We guarantee that all money raised will go directly to Milford Hospice. All expenses incurred during the walk will be paid for ourselves.

If you would like to donate to this worthwhile organisation please click the Go Fund Me link here. 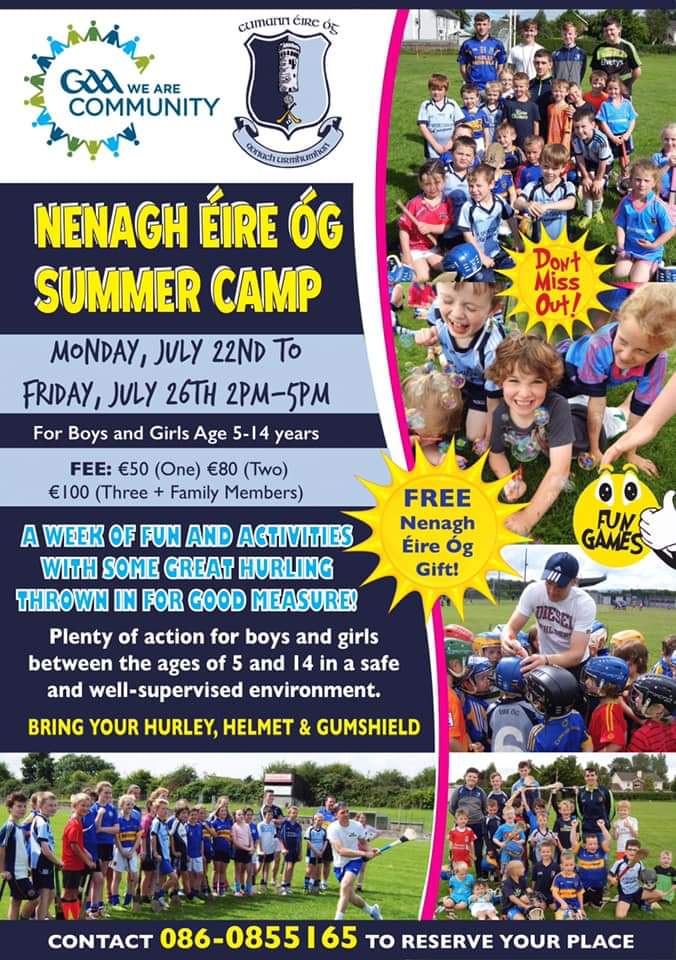 It’s Summer Camp time! Registration for boys and girls aged 5yrs-13yrs from 1.15pm tomorrow. Free camp T-shirt for all kids! Bring a small lunch for break time and believe it or not, put sunblock or our young stars! Text 086 0855165 if you need more info. See you all tomorrow! 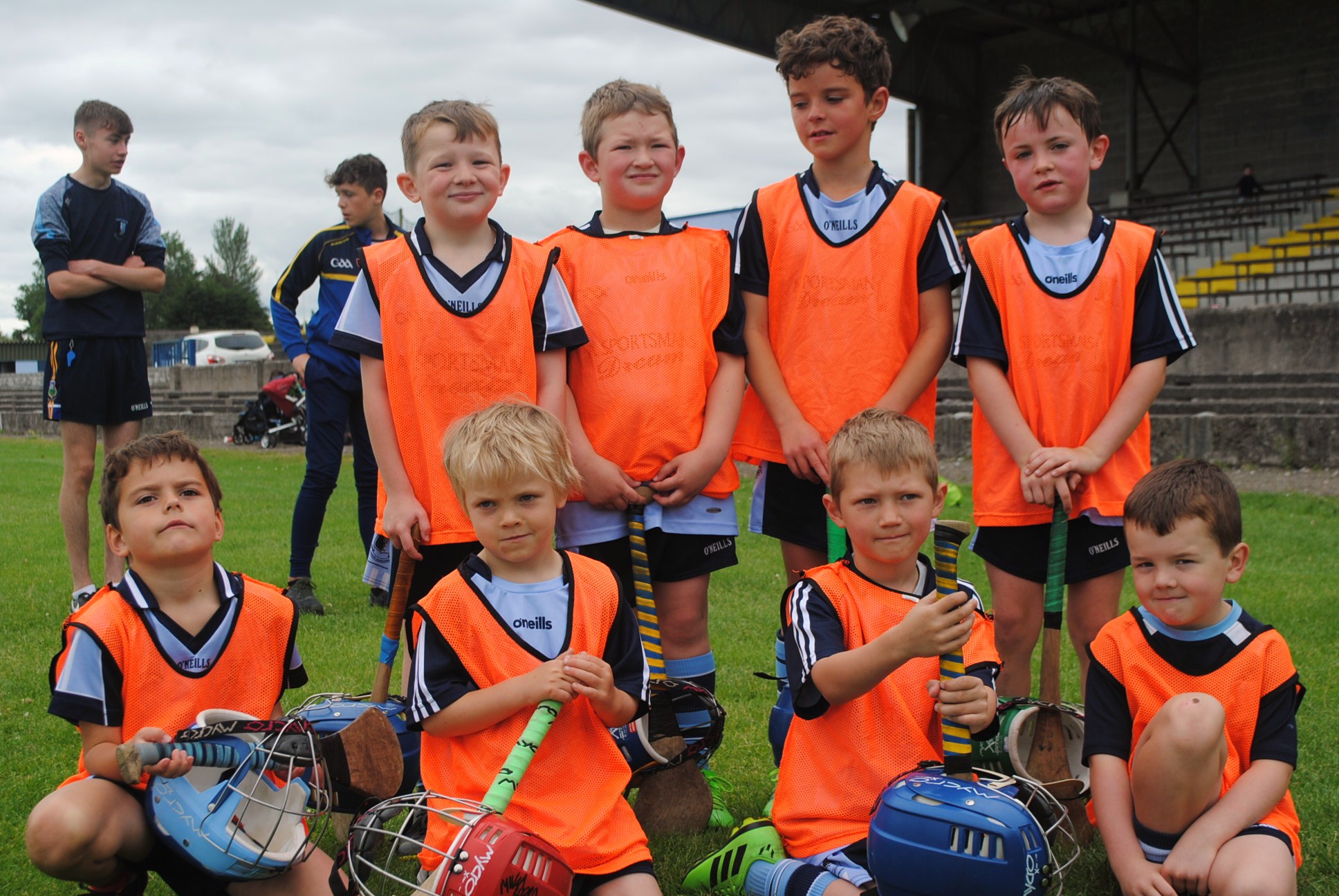 The Nenagh Éire Óg under-8 street leagues finished up Saturday morning in MacDonagh Park. The leagues ran over the past three weeks and Saturday was the seventh day of them. 33 children represented their areas in town and ten others had also taken part over the past number of weeks but were away on holidays today all over the world in far away places from China, France, Portugal, Poland and to the USA. They left instructions to their teammates before they left that they wanted to win the trophies and to try their best. 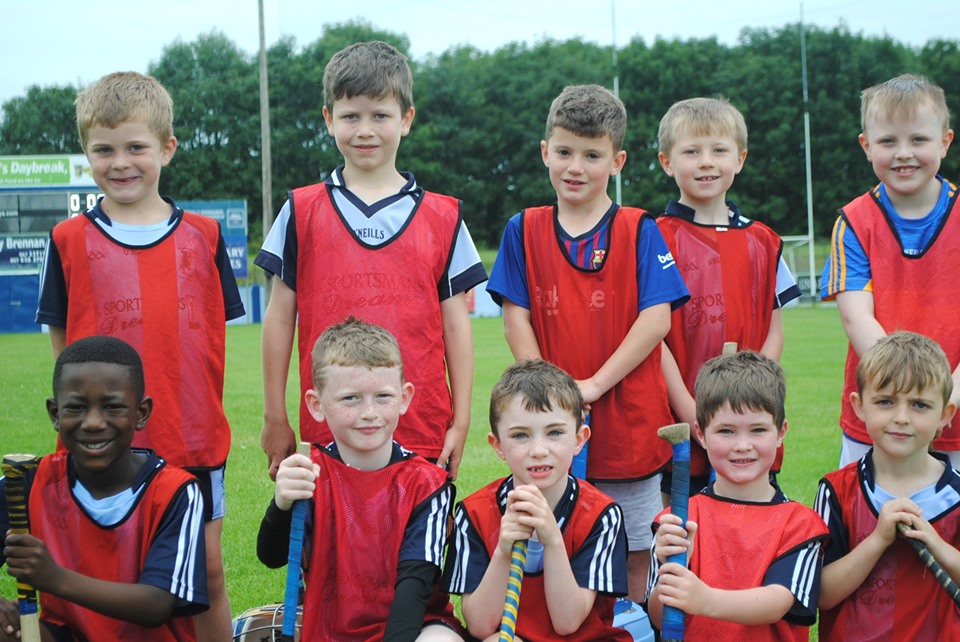 We will run a repeat street league finals day in September when they are all back home.
The four teams were from the Borrisokane Road, Thurles & Limerick Roads, Gortlandroe and Benedine.
The four teams lined up for a mini-parade pre-match and stood for Amhrán na bhFiann with their team mates. 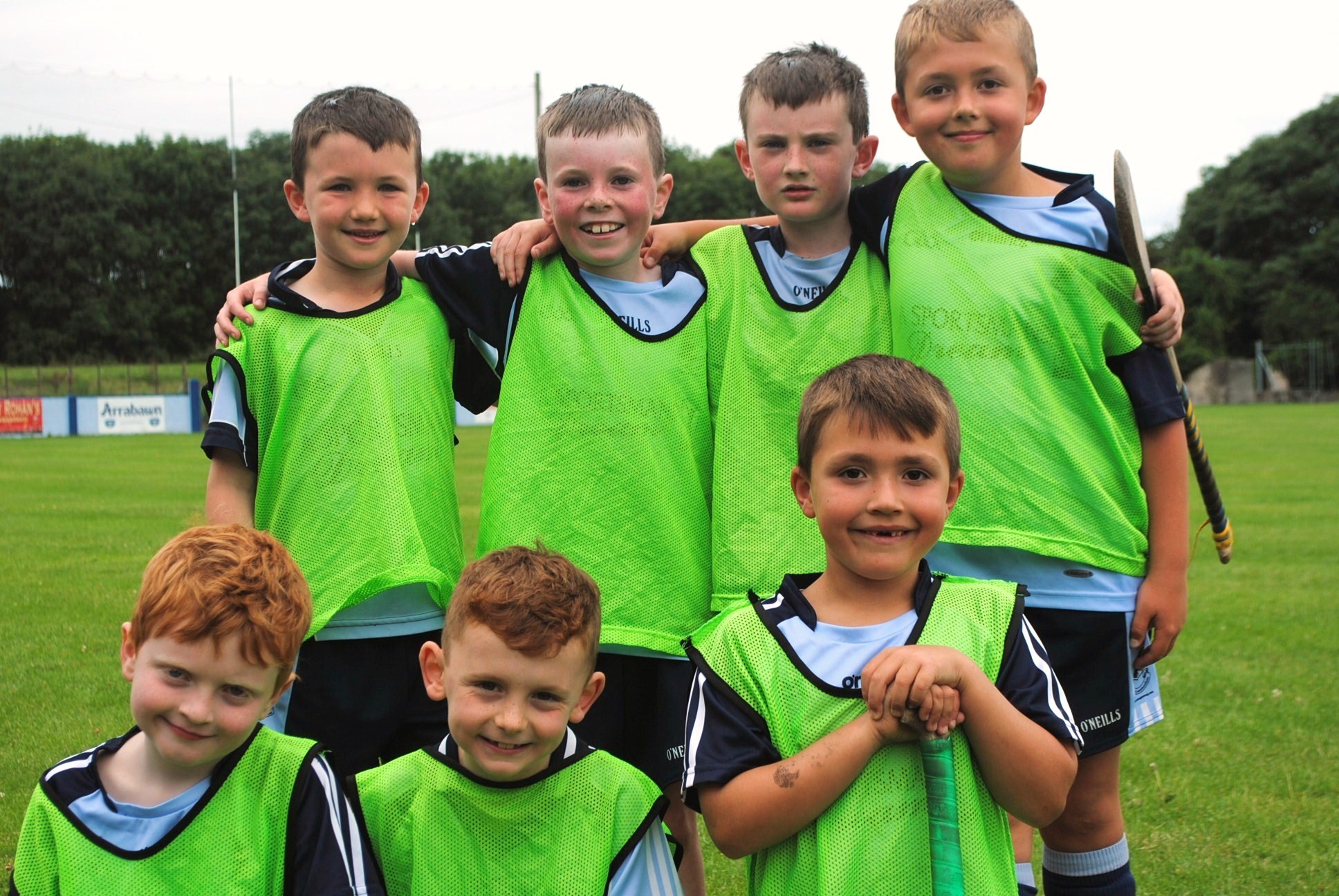 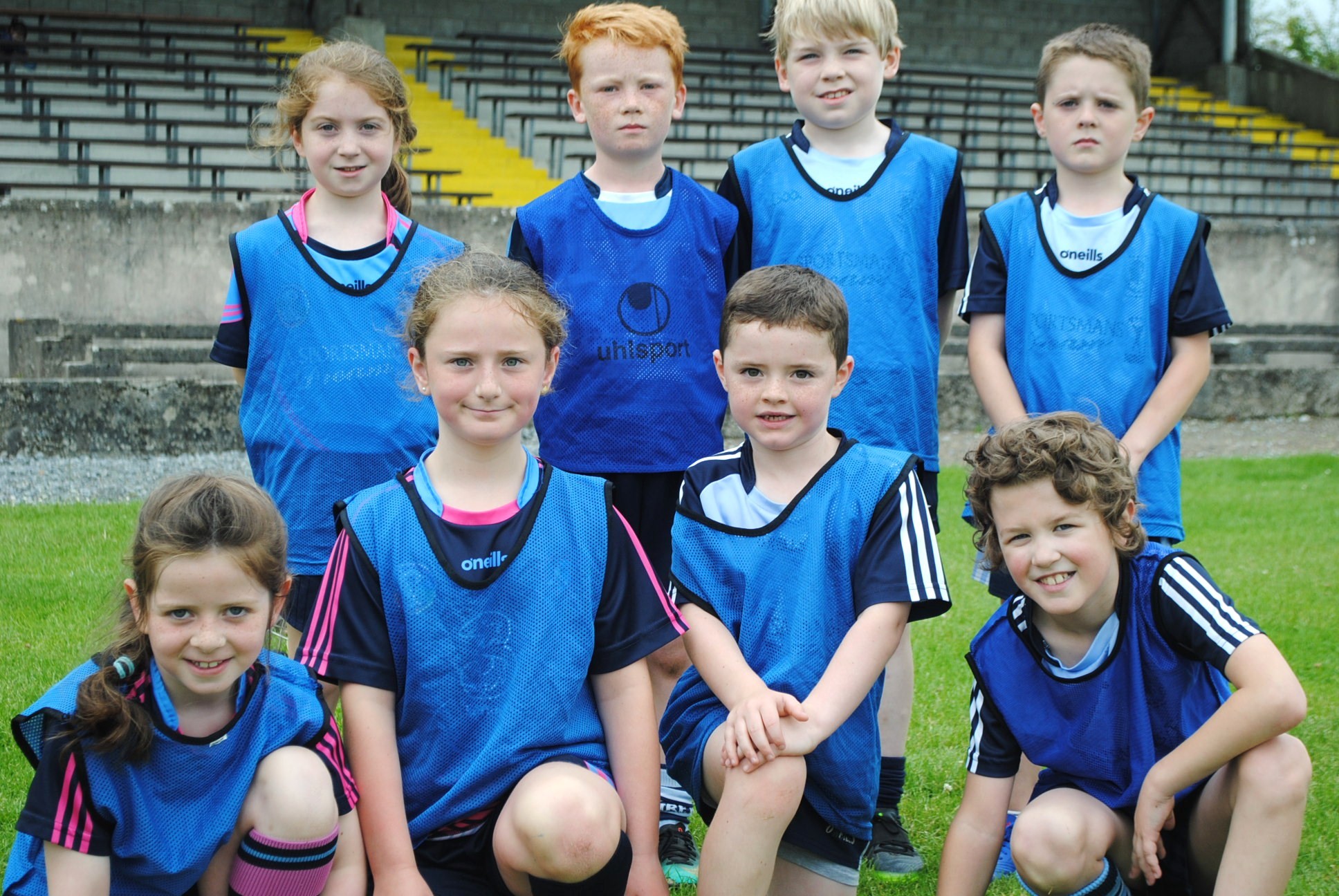 After the games Tipperary and Éire Óg star Conor McCarthy presented each player with a medal and presented the two winning captains with the trophies. Our thanks to Conor and we wish him and the rest of the under-20 team all the best of luck next Tuesday evening against Cork in the Munster Final.

Juvenile Chairman Liam Heffernan commended the children on their great efforts and encouraged them to stay practising and to take part in the club summer camp next week and the Cúl Camp in late August.
A special thanks to our two young whistlers from the under-16 hurling panel for helping out. Thanks also to Catherine McTiernan for all the hard work behind the scenes helping organise the street league.

We welcomed the under-10 boys of Michael Cusack’s Hurling Club from South County Galway, a combination of Beagh GAA and Kilbacenty clubs. A wonderful bunch of lads and excellent young hurlers. We look forward to meeting them again. Thanks to our under-10 parents for the wonderful spread of healthy treats for all after the matches. 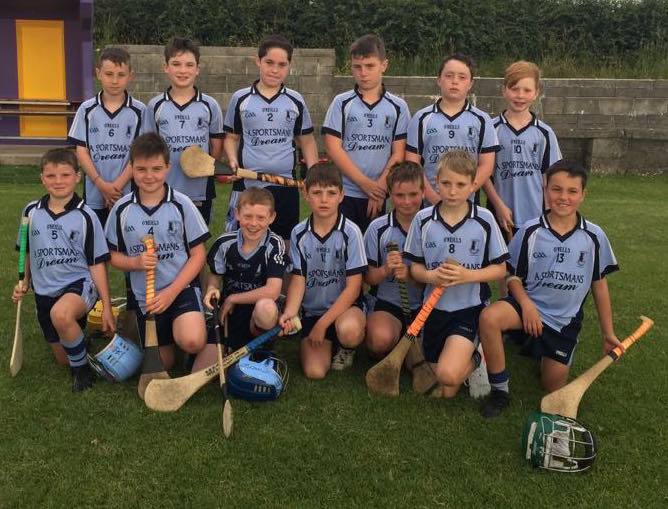 Our under-12 group C warriors bowed out of the championship during the week when they lost out to an excellent Newport side in their North Tipperary quarter-final. They have made huge strides in their development this year and should be proud of their efforts playing up a grade in Group C for the first time. Well done to them on their mighty efforts last night and keep up the good work at training!