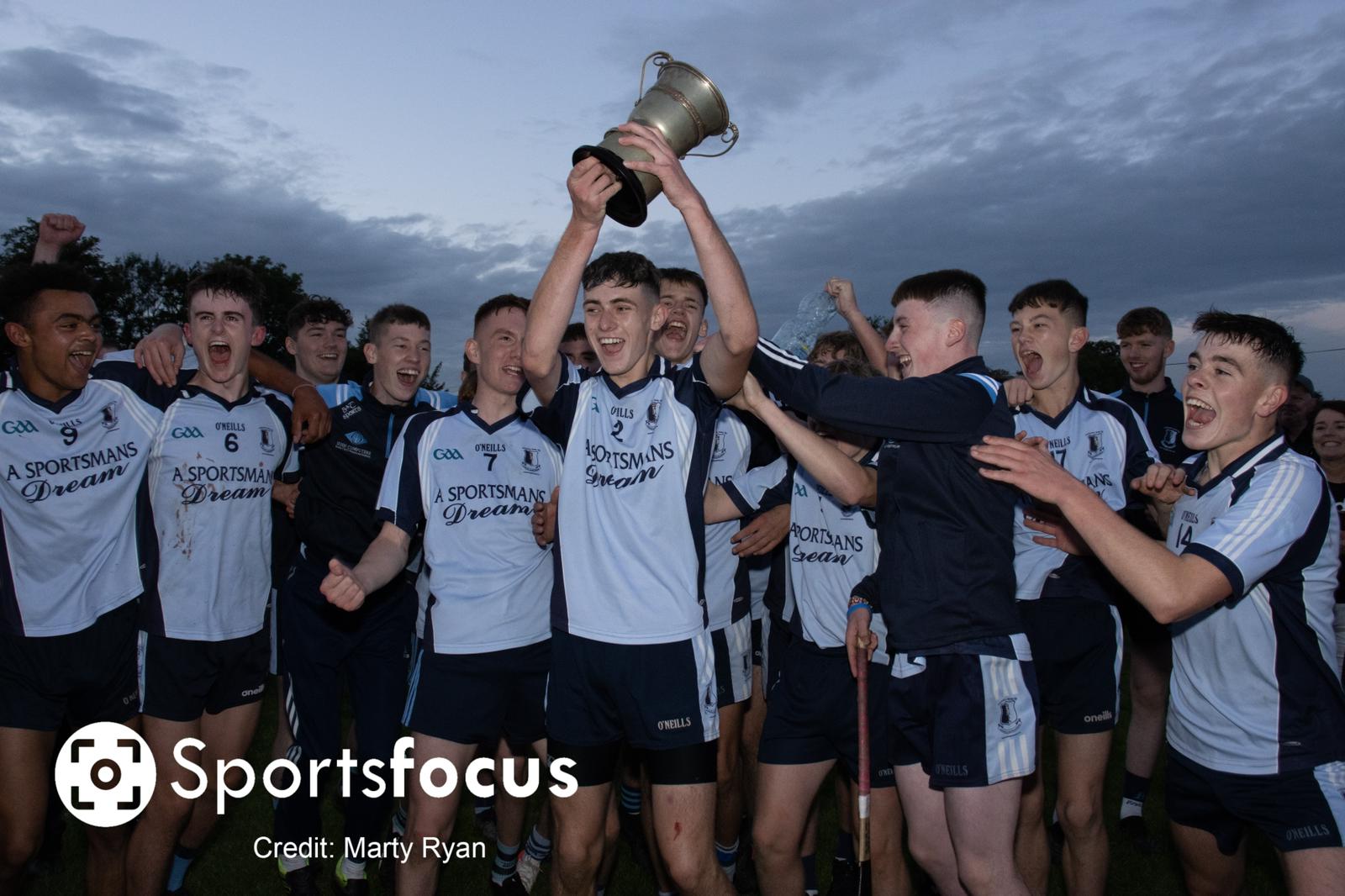 Well done to our Junior As who made it four wins from four when they defeated KIlruane in the final round of the group stage of the championship on Saturday last. The score in the game was 1-22 to 1-14 with Cian Crowley getting the goal. In topping the group we now go on to play Kilruane the the North semi final – this game is due to take place on Sunday 3rd October. 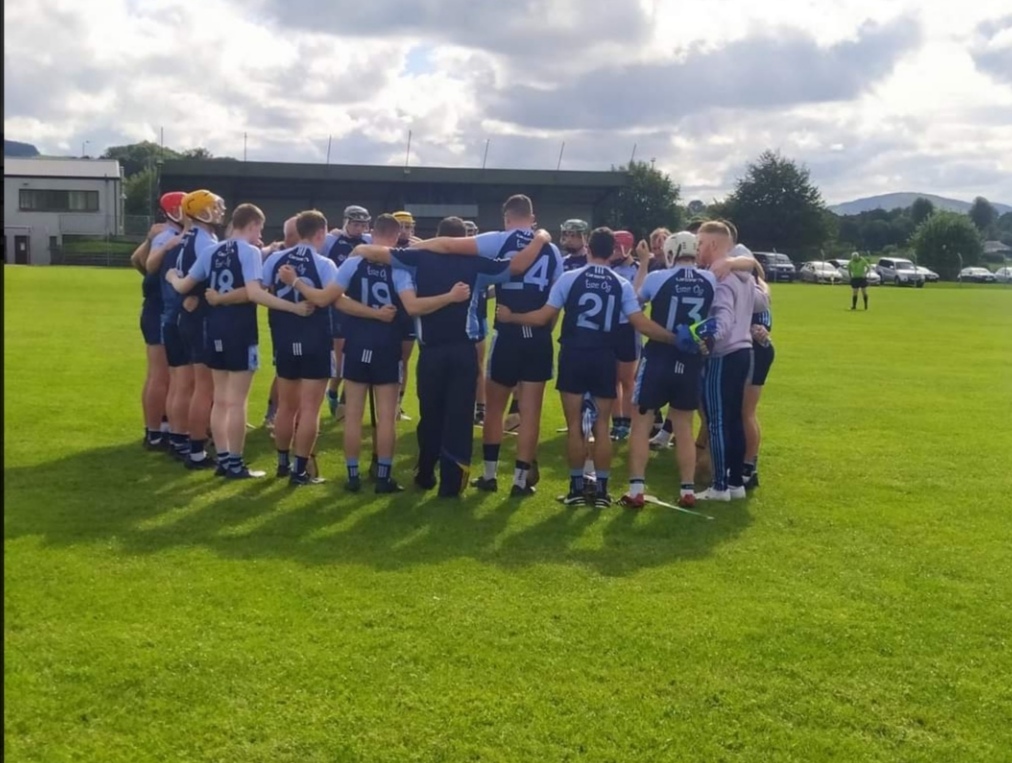 Best of luck to our senior hurlers who take on Borrisoleigh in Round 3 of the Co Championship next weekend. This is a must win game to ensure we progress to the knockout stages of the championship. The game is fixed for next Sunday at 3.45 in Semple Stadium – please come out and support. This will be an all ticket game and tickets are available to buy via the link below. Anyone requiring assistance to purchase a ticket please text 086 0855165 ASAP. 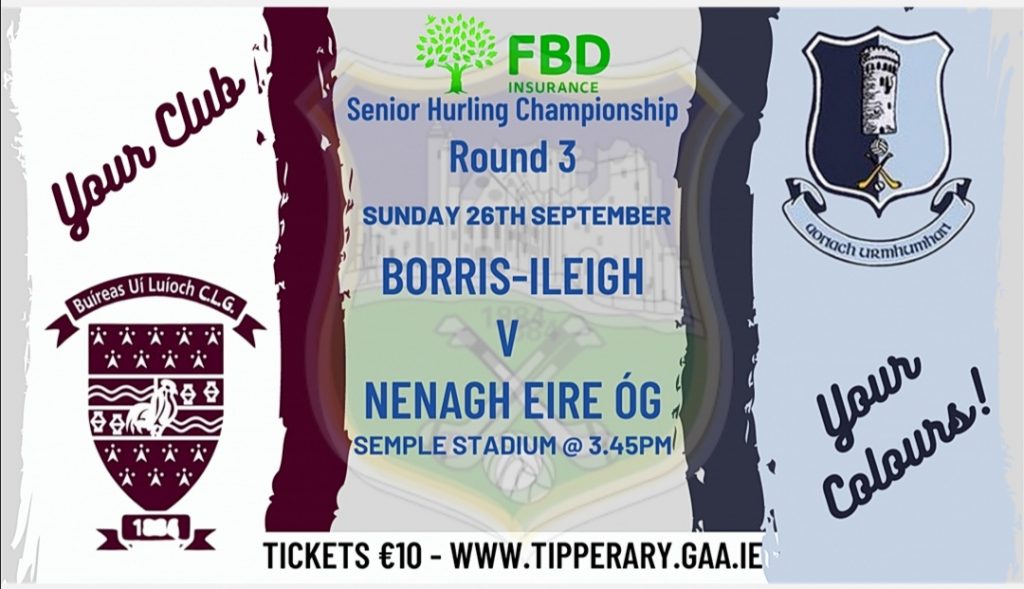 The first draw of the 2021/22 Tipperary Draw will take place on Friday 1st October. Our promoters are busy at the moment contacting existing members and we are also looking for new members to join the draw. This is a great draw with terrific prizes each month including a car, choice of holiday and cash prizes. The Tipperary Draw has been a great fundraiser for the club over the years with up to €70 from each ticket sold by the club going back into the club so we are asking once again that our supporters and members please get behind this great draw. Please contact Bartley Ryan at 086 735 8359 for further information and if you would like to join the draw. 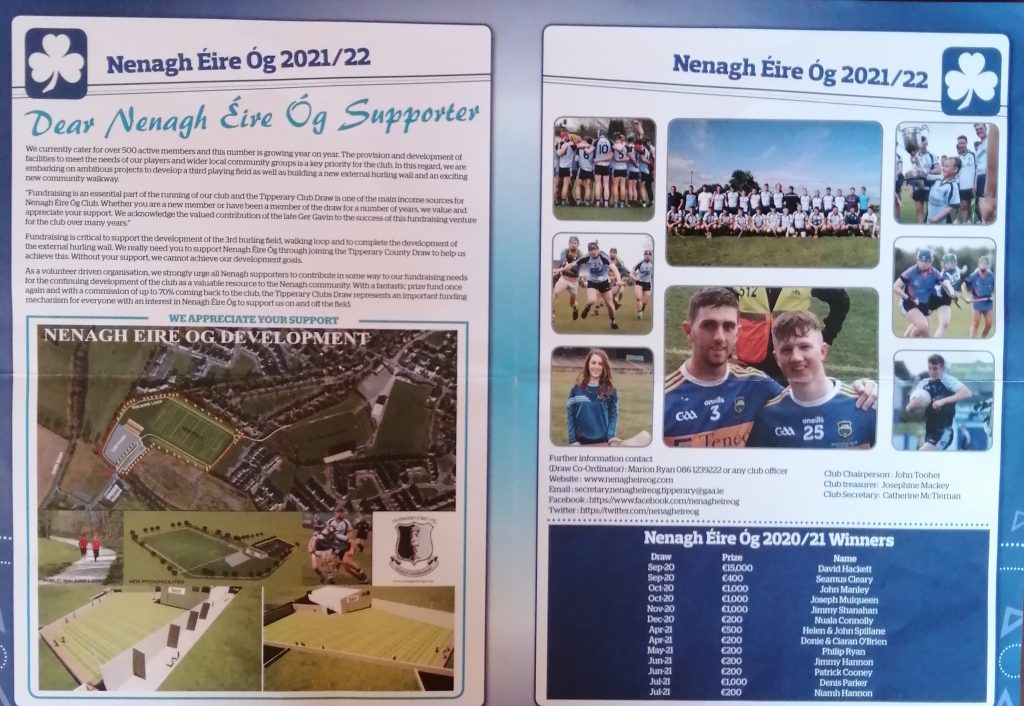 Next Monday night’s lotto jackpot will be €7,000. Please support our lotto and play online through the link on the club website.

Work on the new hurling wall is almost complete and it looks amazing. Please remember to stay off the astro until the final works are completed. Everyone will be notified when the hurling wall and astro are available for use by club members. Any remaining donations can be paid over to your fundraising representative. Any remaining tax forms associated with your donation should be given to your fundraising representative along with details of the names you wish to have included on the club development jigsaw wall.

Training continues every Saturday morning from 10 – 11am. Anyone else interested in joining Under 5 training please contact Erica on 086 8774496. Please make contact as soon as you can as an online health questionnaire needs to be completed before taking part.


Training continues on Tuesday evenings 6-7pm for the next couple of weeks and Saturday mornings 10-11am. As always we would love to see new faces.

Hurling training continues Tuesday 6-7pm and Saturday 10-11am with football training on Wednesday 5.30-6.30pm. Great to see new boys joining who are always more than welcome.

Training continues this week on Tuesday evening. We look forward to using the new hurling wall and astro turf over the next few months. New members welcome, if anybody wishes to start they can contact us on 0874086439 or through the club social media pages.

Under 13D team qualified for the North final after a great battle with Toomevara last Wednesday evening in Dolla. This was the teams ninth championship game this year and the panel have gone from strength to strength since we returned from the Covid break. The boys next play Newport in the final on Wednesday evening in Portroe at 5:45 and hope that they are well supported on the evening.

Under 13A team were defeated by Newport in their semi final in the plate competition in Ballina last Tuesday evening. After a very competitive thirty minutes by the boys Newport pulled away in the last ten minutes to run out convincing winners. Well done to both panels who have shown great commitment and dedication at training all year.

Under U15 hurlers bowed out of the championship at the quarter final stage last Thursday against a strong Borrisoleigh side. Despite conceding first half goals and facing an uphill battle the team continued to fight to the very end. This group will now play the semi final of the Plate on Thurs evening at 5.45 in Nenagh with Silvermines providing the opposition.

Our minor team put in a huge performance to overcome a strong and determined Roscrea side in the North semi final last week in a wet Toomevara. This game was very close and intense from start to finish. In truth Nenagh led for most of the hour and emerged victorious on a score line of 0-13 to 1-8. Every member of the team gave everything to the cause but captain Sean Moylan summed up the determination of this squad by making an unbelievable block on a goal attempt when the game was in the balance.
In a repeat of last year’s final the boys went on to play Toomevara in Kilcolman on Sunday evening and after an extremely tight battle which went to extra time our Nenagh boys, scoring a late goal,  emerged as winners and the title of the North Tipperary Under 17A champions. Congratulations to the boys on a wholehearted determined performance that earned the win ultimately. Congratulations to Greg Browne and his entire backroom team who facilitated this group in achieving this gallant win. Éire Óg Abú! 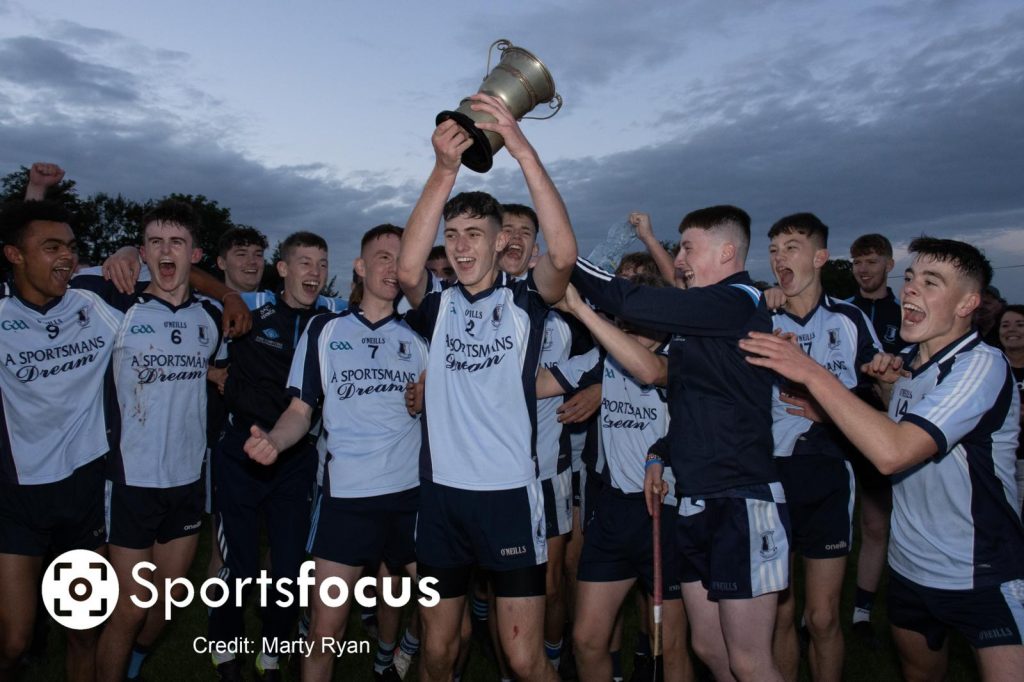 Captain Sean Moylan celebrating with his teammates after receiving the U17A cup following a great victory over Toomevara in the final.

Tipperary Draw
The Tipperary draw 2021/22 is now open for subscriptions. Contact Bartley Ryan on 086 7358359 for any details and to subscribe. Great prizes every month including cars, cash and holidays. Even better news is that €70 from your draw subscription will remain with the club to cover day to day running costs. Your support is very much appreciated.
Lotto
The lotto has always been one of our main fundraisers and with our current club developments it is of great importance to us now that everyone continues to row in behind our lotto and we continue to increase the Nenagh Éire Óg online club lotto subscriptions. We are asking our juvenile families and supporters to play our club lotto online. It costs just €2 per week to play safely online and there are different payment plans available. If your not in, you cant win! The Jackpot is now at an attractive €6,800.
Please choose the ‘auto-renew’ option and also help family members who may not have an online presence to join. The link to join is available on the clubs web page so please sign up now and you will be included in the next draw. 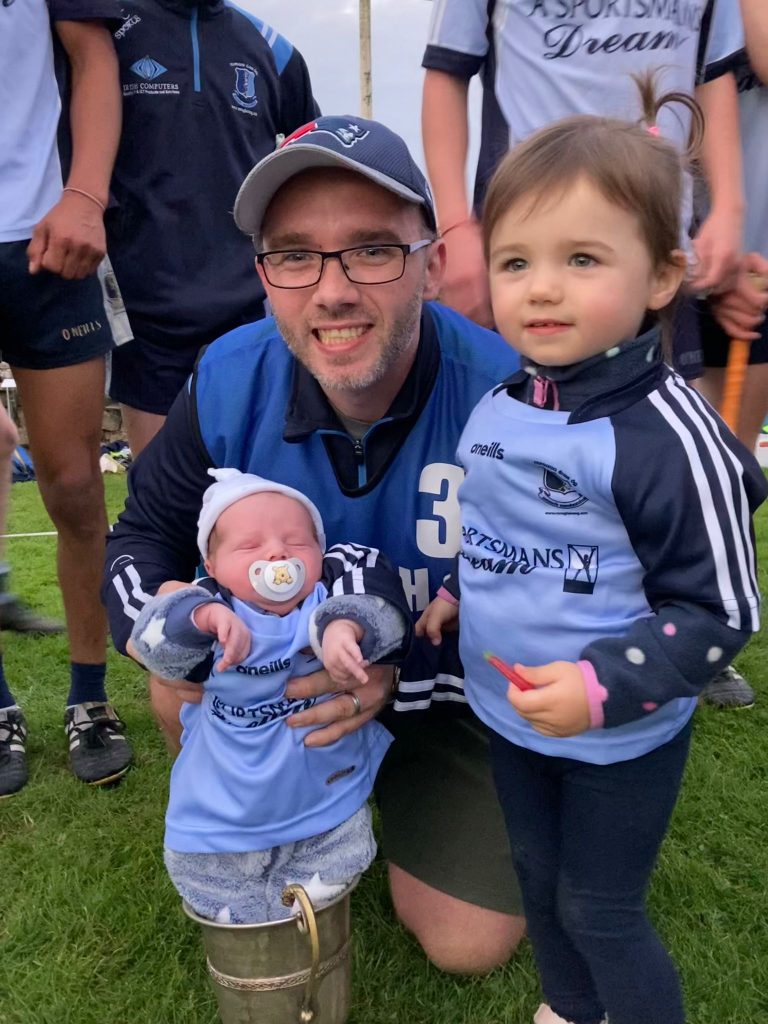 U17 selector, Cian Tucker with his daughter Grace and Éire Óg’s youngest supporter, three week old Diarmuid, who were thrilled to see the Nenagh Under 17A team become North Tipperary champions last Sunday evening in Kilcolman. 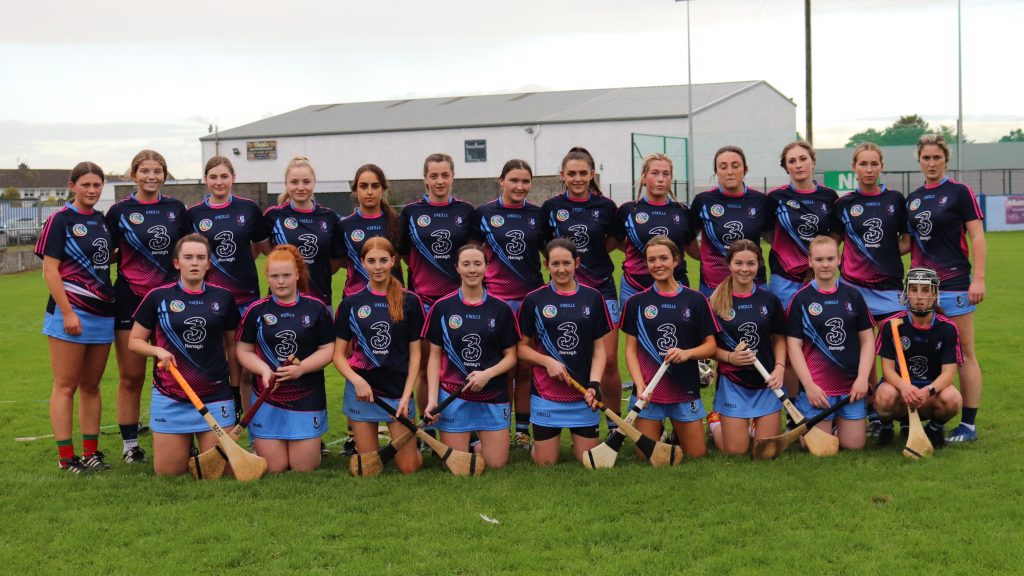 Senior camogie team who were defeated by Silvermines last weekend in the first round of the Championship
Our senior hurlers began their Championship campaign on Saturday against the Silvermines in Nenagh. Despite some superb individual performances, the Silvermines edged it on a scoreline of 2-18 to 2-14. In truth Nenagh will be disappointed with the outcome as many of the Silvermines scores came from our mistakes. The first quarter ended almost equal but the Mines opened a gap before the end of the the first half. Nenagh put in a strong second half performance and brought the deficit down from 10 points to 4. The concession of a second goal killed a lot of our good momentum. For Nenagh Grace O’ Brien, Eva O’Brien, Caroline Browne, Zoe Grattan and Rachel Maher caught the eye. 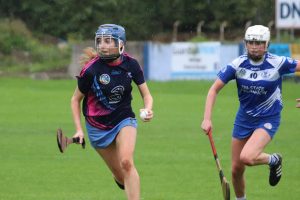 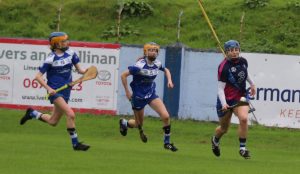 Éabha O’Brien and Rachel Maher in action during last weekend’s senior camogie game.
Under 14/16s
We are awaiting dates and times for the upcoming u15 league. Training will continue for u14/16 group Monday and Thursday evening at 6pm.
Congratulations to Laura Nagle who played on the Tipperary u15B team who performed so well at the All-Ireland u15 development blitz last weekend.
Under 12s
Our u12 teams had a big day out in Clonoulty on Sunday, as both teams lined out for their respective co semi finals.
Following a super effort and fighting performance from both teams, Nenagh 1 beat Ballybacon in the first game 3-4 to 2-2 and Nenagh 2 beat Fethard in the second game 2-1 to 0-0.
Both teams will now progress to the cup finals. No dates/times yet for these fixtures. 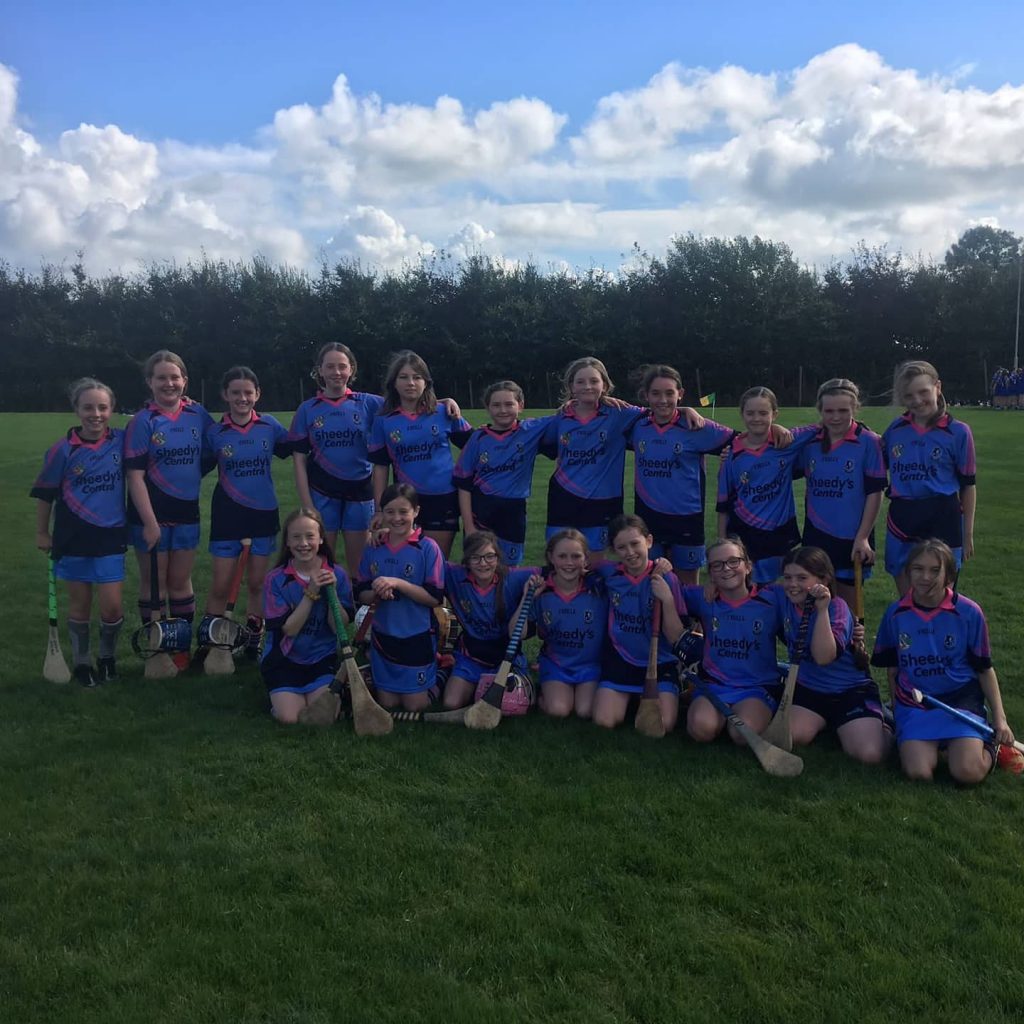 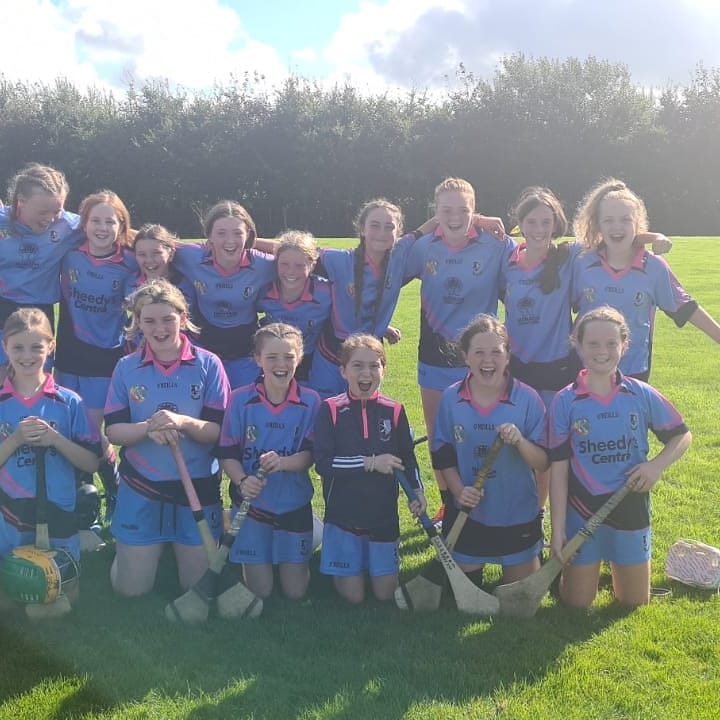 Nenagh Eire Og U12 teams who both qualified for Co Finals at the weekend.
Under 10s
U10 training continues on Monday nights for the next couple of weeks. Looking forward to our end of season blitz in two weeks to finish out the year for the girls.
Under 8s
Training will be Thursdays only as our training season draws to a conclusion in the next couple of weeks.
Under 6s
Well done to all the U6s who played their first game for Nenagh Eire Óg at a blitz hosted by Kiladangan last Thursday. There was a huge turnout and great games were played. The girls were super. 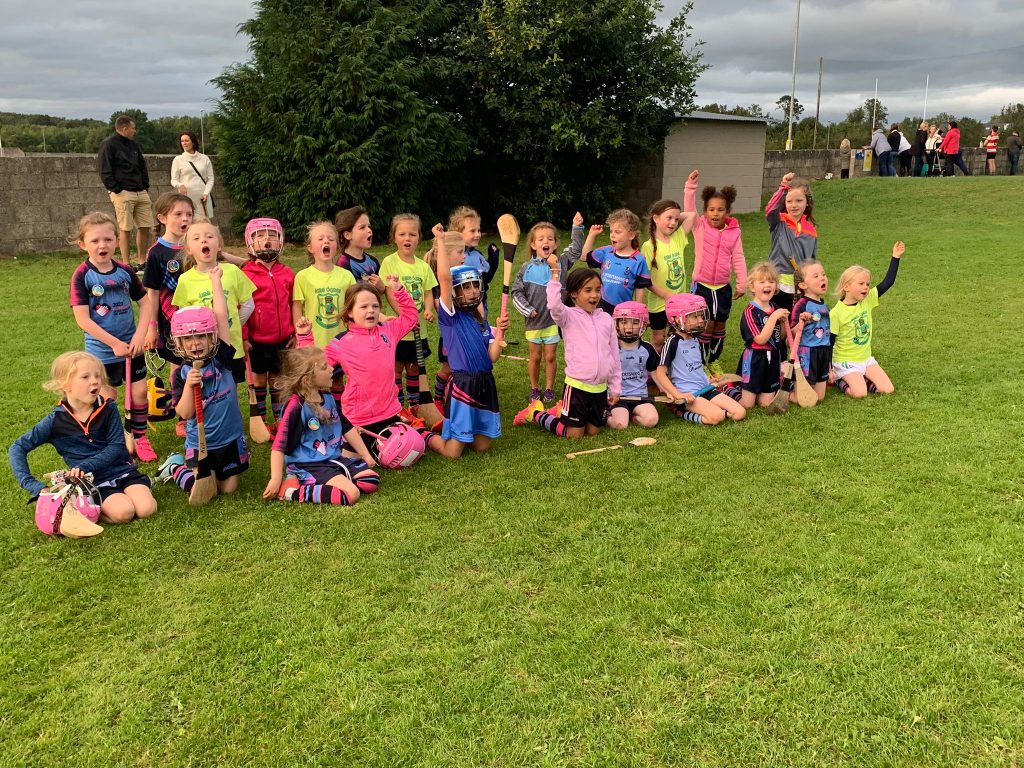