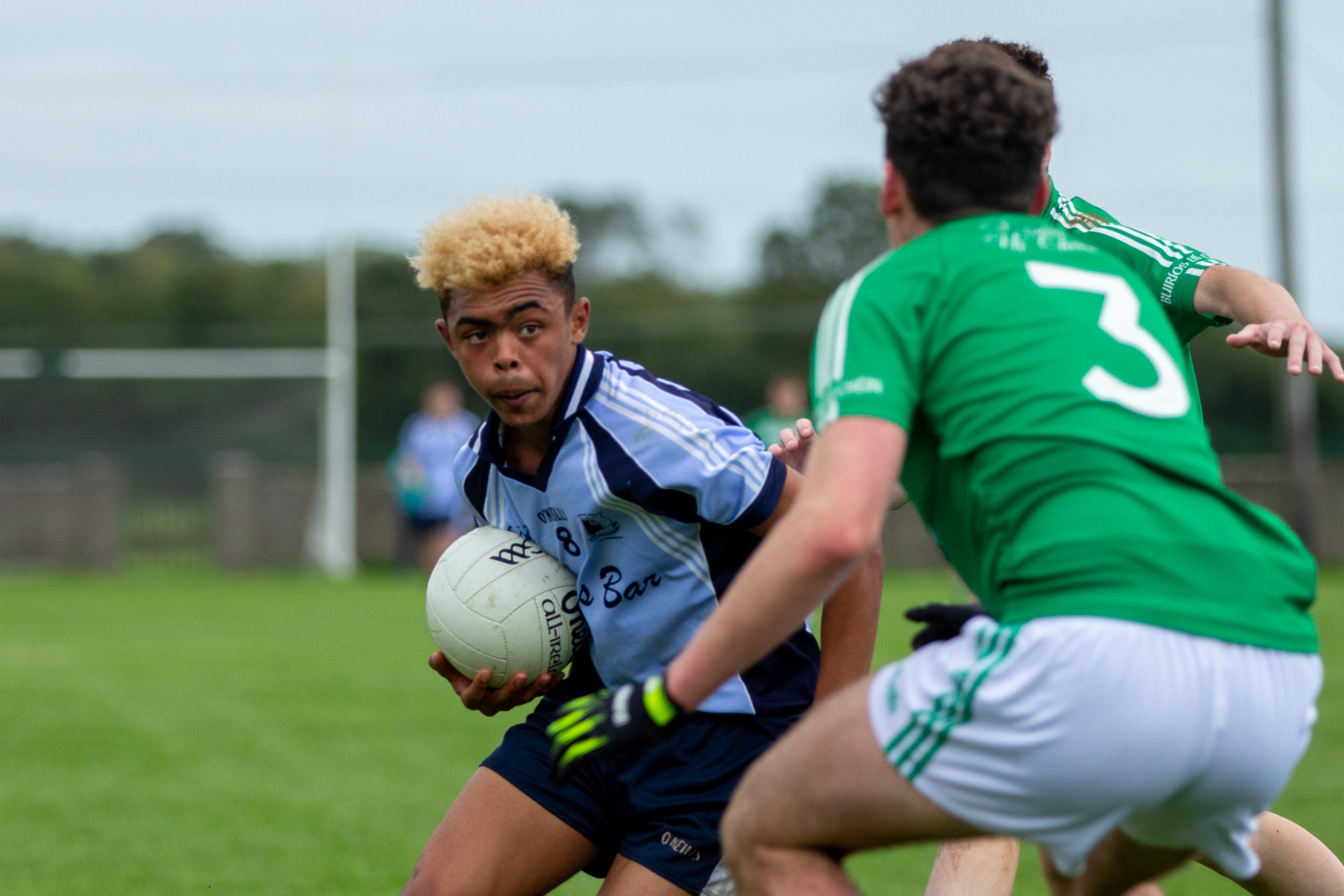 Taurai Shayanewako in action against Borrisokane

Our junior-Cs continue their good form, the junior-As prepare for a semi-final clash while three of our camogie sides all look forward to finals next weekend. All of this and more in this week’s news on the Blues 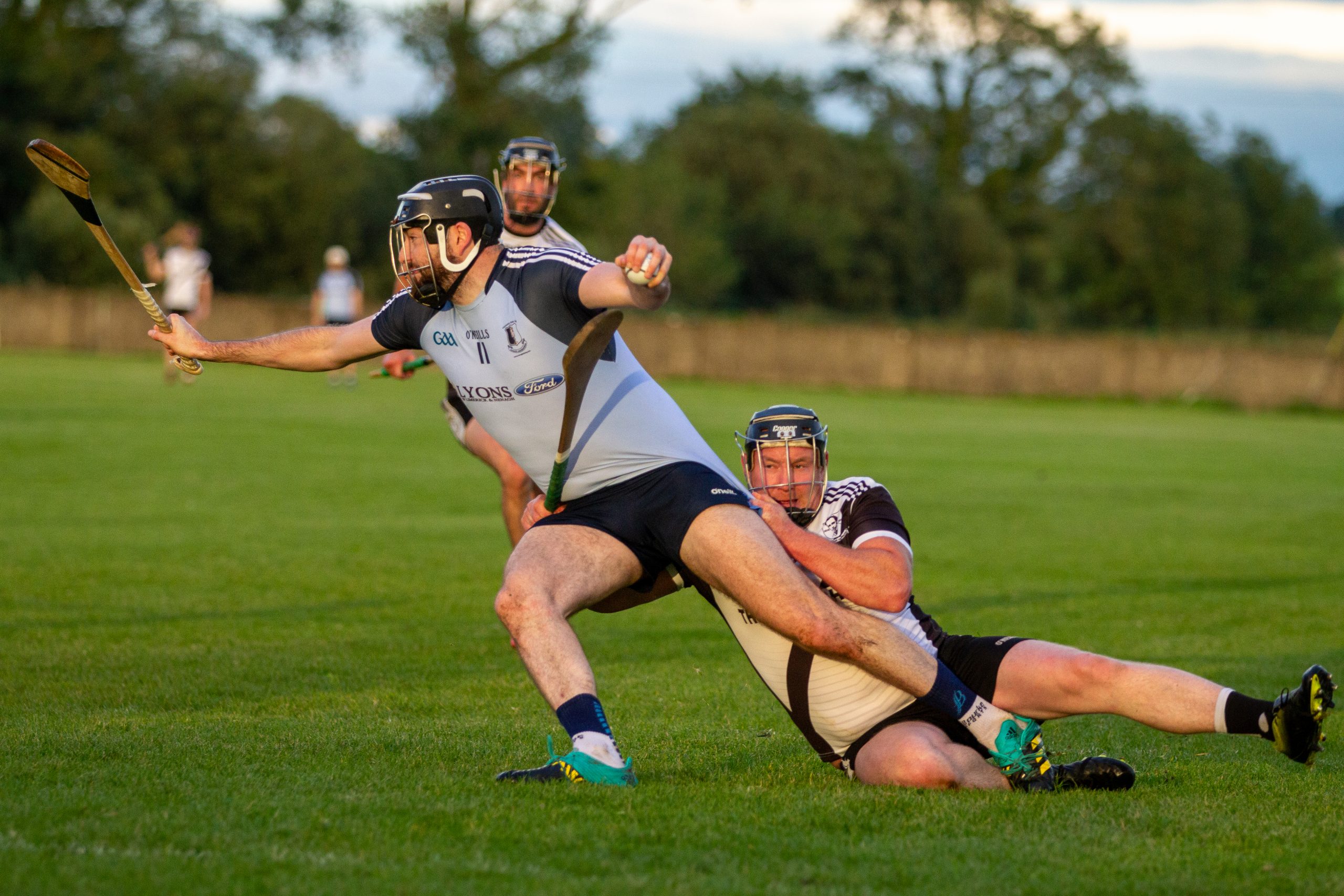 Our junior-A hurlers will play Kilruane MacDonaghs on Saturday in the North semi-final in Puckane at 5:30pm. Best of luck to Eddie Tucker and his team. 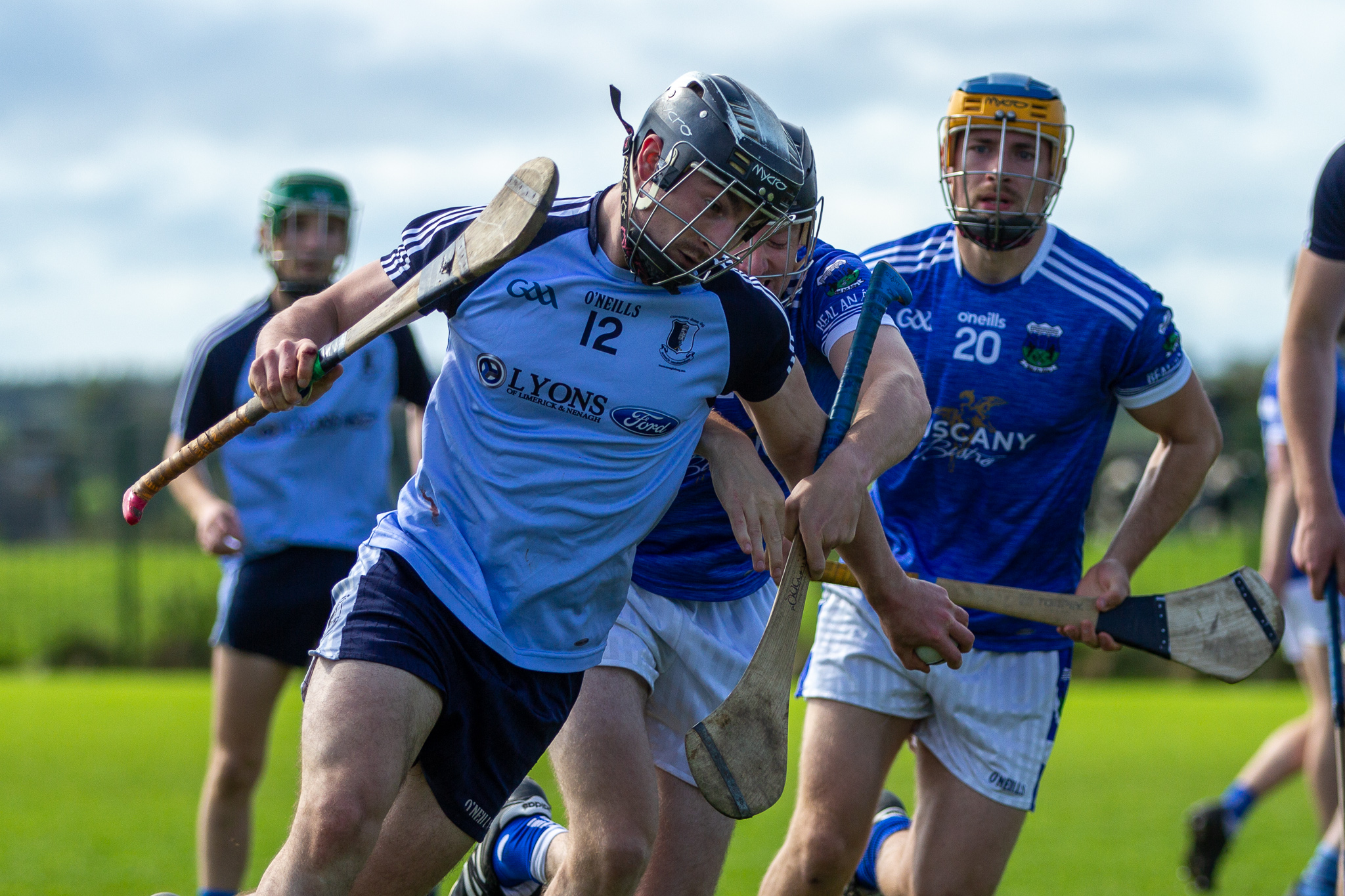 Gavin O’Connor on the attack against Ballina

Our junior-C hurlers continued their good form on Sunday morning in Ballina making it three wins from three in the North championship with a 2-21 to 2-4 win against Ballina. Goals in either half from extreme ultra veteran Lenny Ryan and Michael Hallinan helped secure the win in a game that was in the melting pot until the final quarter when Nenagh pulled away. Our final game of the group stages is on Sunday morning at 11:30am in MacDonagh Park when Ballinahinch will provide the opposition. On another note, we wish to thank former Éire Óg hurler Brian Fitzgibbon who now plays for Ballina for his help in treating one of our injured players. 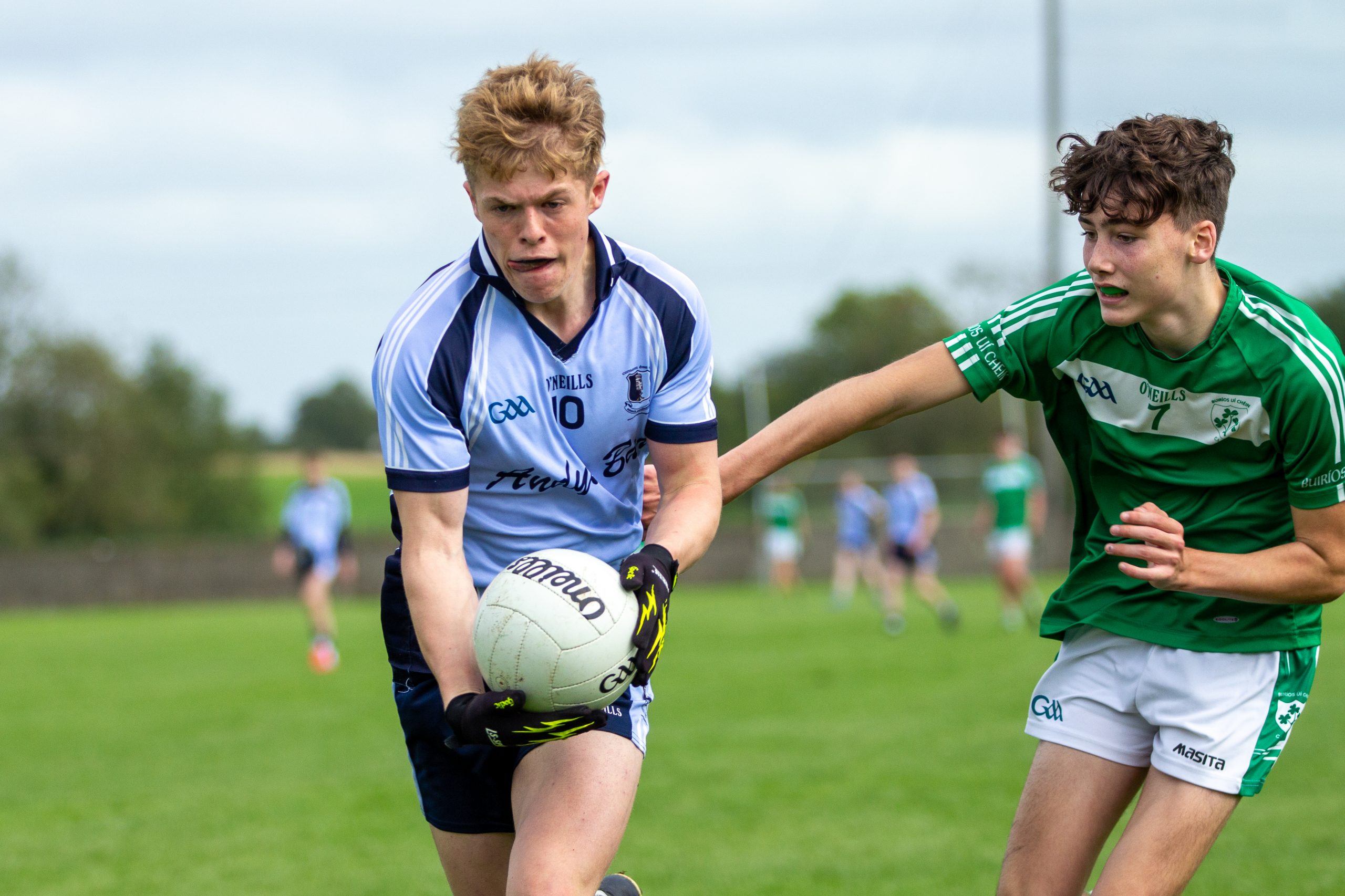 Cian Galvin about to score Nenagh’s second goal of the game in the first minute of stoppage time before adding another two minutes later.

Our minor footballers left it very late to defeat Borrisokane on Saturday afternoon scoring 2-2 in stoppage time to beat the hosts in Gardiner Park, 3-7 to 1-5. A Josh Keller penalty and two injury-time goals from Cian Galvin sealed the win and the lads now advance to the North semi-final. 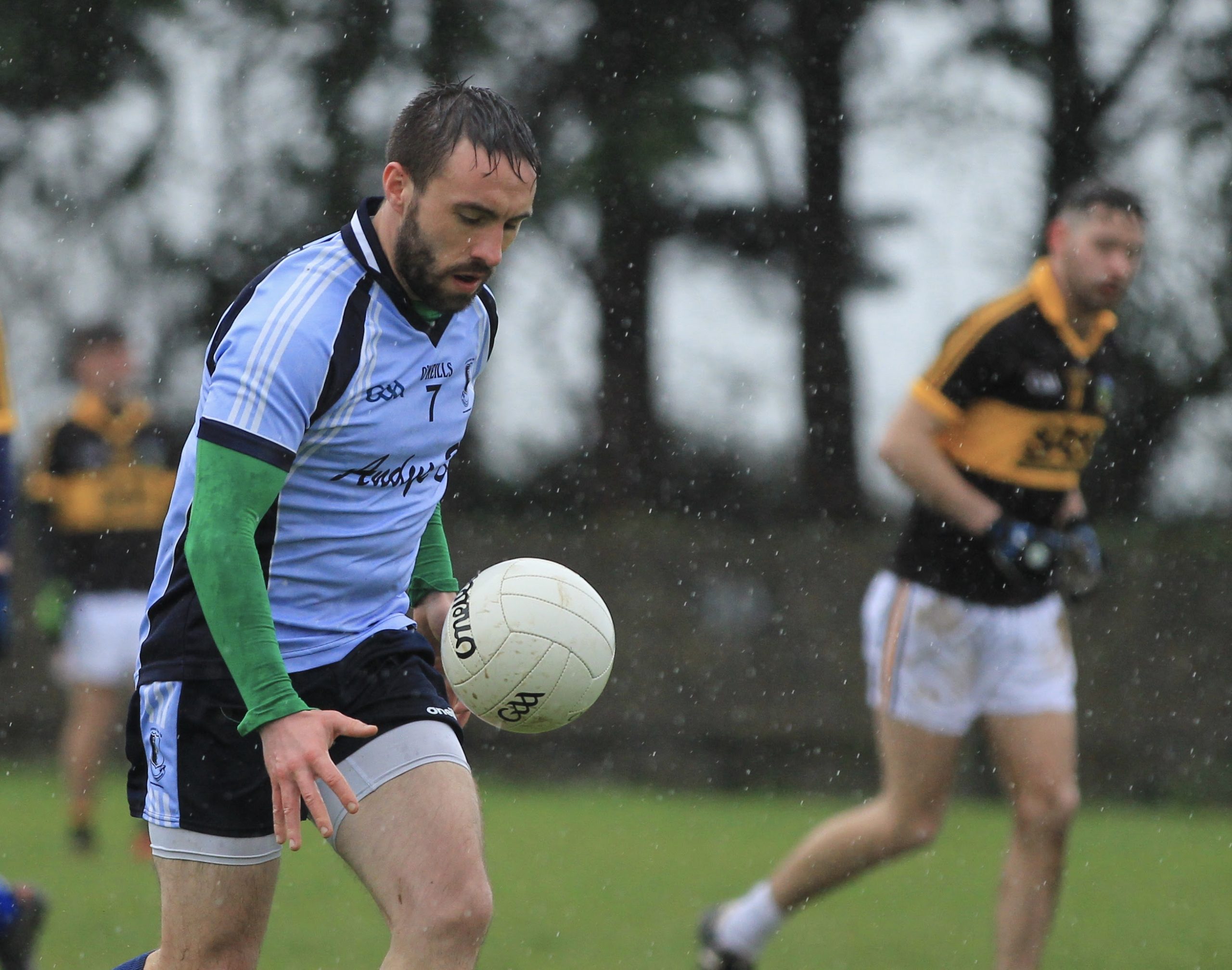 Training continues for our junior football team as they prepare for the upcoming North Tipperary championship. If you would like to join the panel please contact joint managers Lenny Ryan or Brian Duffy. Alternatively, you can message any of our social media channels. 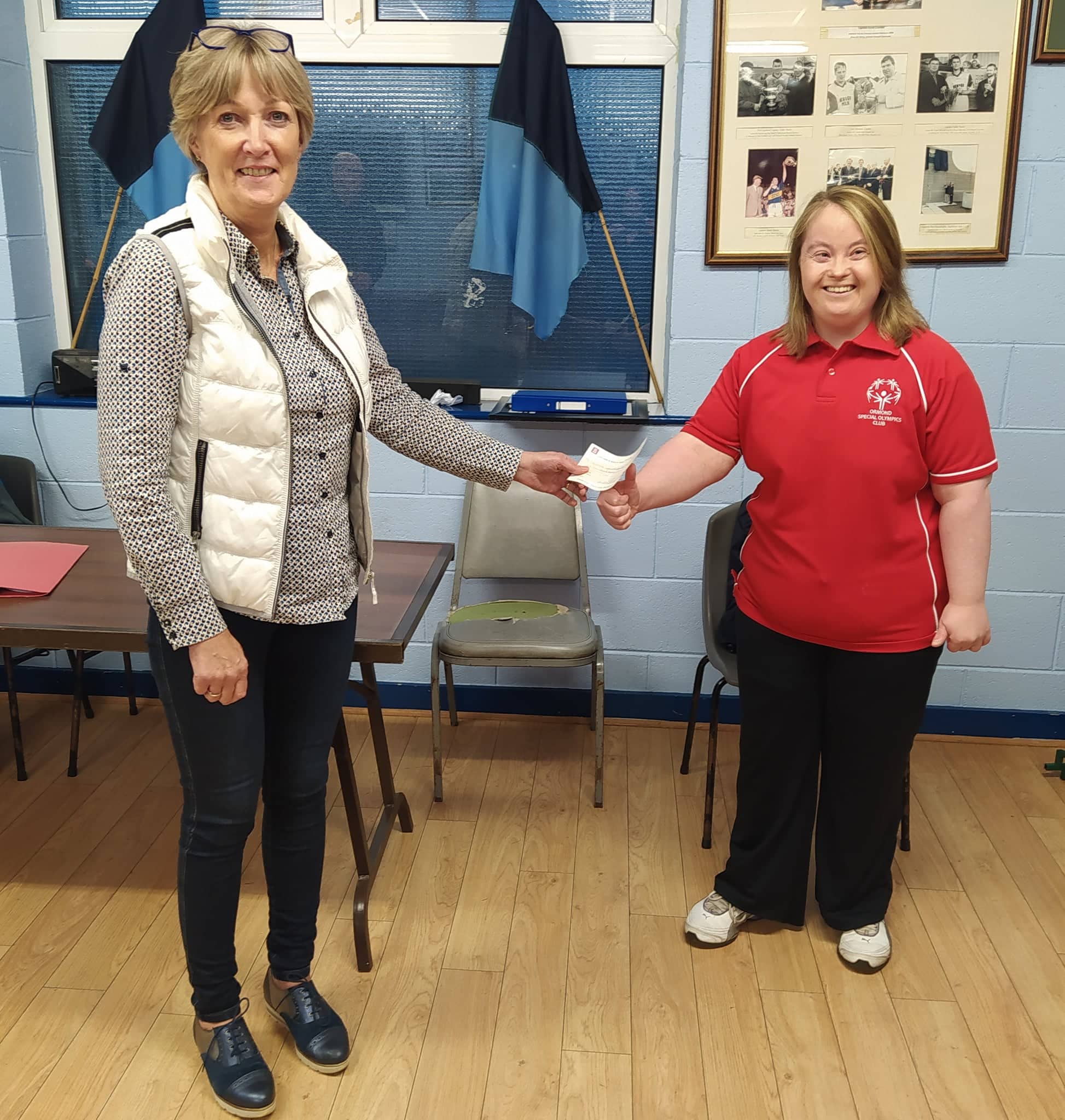 There was no winner of this week’s lotto draw. We did however have the first winners of our Supplementary Lotto Draw. The three lucky winners of €500 each are:
1. Mary Duggan, Cluain Caoin.
2. Niall Murray, Ballygraigue Road.
3. Michelle Ryan, Ballygraigue Estate.
There was also a warm welcome for Ormond Special Olympics, who were the second of our community charity partners to receive a cheque for €500. Club Treasurer, Josephine Mackey made the presentation to Ormond sports star, Lucy O’Neill. Lucy then did the honours and drew out Nenagh Lions Club as our next charity to be awarded €500. Nenagh Éire Óg wishes the very best of luck to Ormond Special Olympics as they plan their return to outdoor activities. 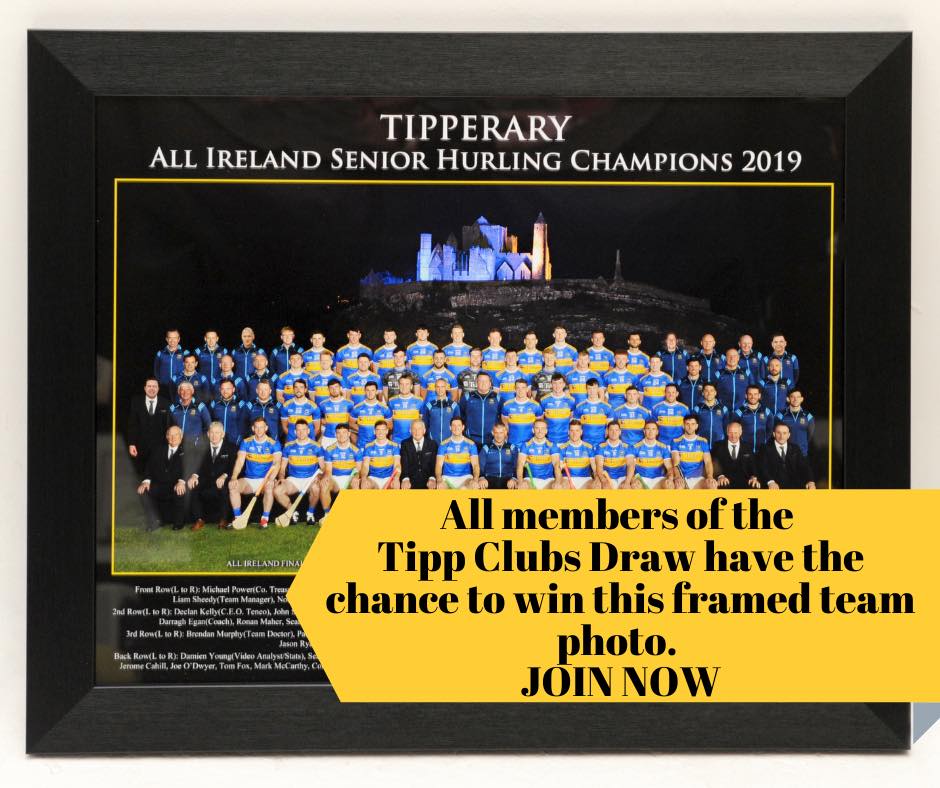 To be in with the chance of winning this amazing All Ireland Senior Hurling Champions 2019 framed team photo just simply join the Tipp GAA Clubs Draw now. We have six photos up for grabs, one each day. All current draw members are automatically entered. One winner will be announced each day from Saturday 12th to Thursday 17th of Sept. You’ve got to be in it to win it! Join the Tipp Clubs Draw here: https://tipperary.gaa.ie/shop/tipperary-2020-2021-draw/ 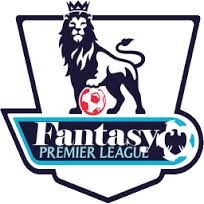 Our under six hurlers had their very first blitz of the year on Saturday morning last in MacDonagh Park Nenagh. The boys played Ballina in what was a fantastic morning’s hurling for these young stars. Nenagh fielded five teams for the blitz. This blitz was the first-ever match for many of these young stars and each one hurled brilliantly. A big well done to these boys on the wonderful performances and effort they all put in at this morning’s blitz. Thanks to Ballina for traveling. Training continues next Saturday morning at ten o’clock to eleven in the park.

Our under eight boys traveled to Thurles on Saturday morning last to take part in a blitz against teams from all over Tipperary. The boys got to play teams from Drom & Inch, Thurles Gaels, Sean Treacys, Moycarkey Borris and Portroe. The boys played very well and enjoyed the opportunity to play against the many different teams. Hurling training will continue each Tuesday evening from six to seven and Saturday mornings from ten o’clock to eleven unless we have a game. New members (boys born in 2012 or 2013) are always welcome. The Wednesday football training is now finished due to school returning, there will be football included in the two remaining training sessions from time to time and details will issue on the group text in advance so that children can have the correct equipment with them at training.

Under ten boys, this group had a very busy week with two blitzes to navigate. First blitz was a mid-week affair, the boys played Kiladangan in three very competitive games last Wednesday evening in MacDonagh Park. The boys played with great determination and effort. There were some excellent skills on display by the Nenagh boys. Thanks to Kiladangan for traveling over to play.

The second blitz for our under ten boys was Saturday morning in Thurles, the boys took on Cashel in the glorious Autumn sunshine. Our boys played three games against three Cashel King Cormacs sides and as we expected Cashel were well up for today’s challenge. Our boys were every bit equal to Cashels’ challenge and we saw some excellent skills, huge effort and determination from the Nenagh boys. Our boys produced some brilliant scores, determined hooking and blocking and excellent teamwork throughout the three games. Thank you very much to the two Under eight hurlers who stepped up and played with their Under ten club mates at the blitz, this resulted in two sets of brothers lining out for the under tens. Congratulations to these two fabulous young superstars on their under ten debut. Well done to all the boys who played against Cashel.

New players are always welcome (boys born in 2010 or 2011), it’s not too late to come along and try out hurling or football for the year. Please note our new training structure for the coming weeks, Tuesday evenings from 5.45 to 7pm, this will be a combined hurling and football training session with football first followed by hurling training, remember to bring hurl, helmet, gum shields and drink, If boys just want to play either code that will be fine. No training on Wednesday. Hurling training on Saturday mornings from ten o’clock to eleven unless we have a game. Keep up the practicing at home boys between matches and training.

Hard luck to our under twelve A Plate Final team who put in a massive effort but just couldn’t take the match from an excellent Kilruane MacDonaghs side last Saturday evening in Cloughjordan. We couldn’t be more proud of our boys though. Onward and upward only for these lads! Thank you to the management group who mentored the boys all season.

Continued good luck to all Nenagh Éire Óg groups in this week’s match(es).

This week’s Juvenile fixtures are:-


Thank you to all those who have already signed up on line to the new Nenagh Éire Óg club lotto. Please visit www.nenagheireog.com for anyone else who wishes to join. 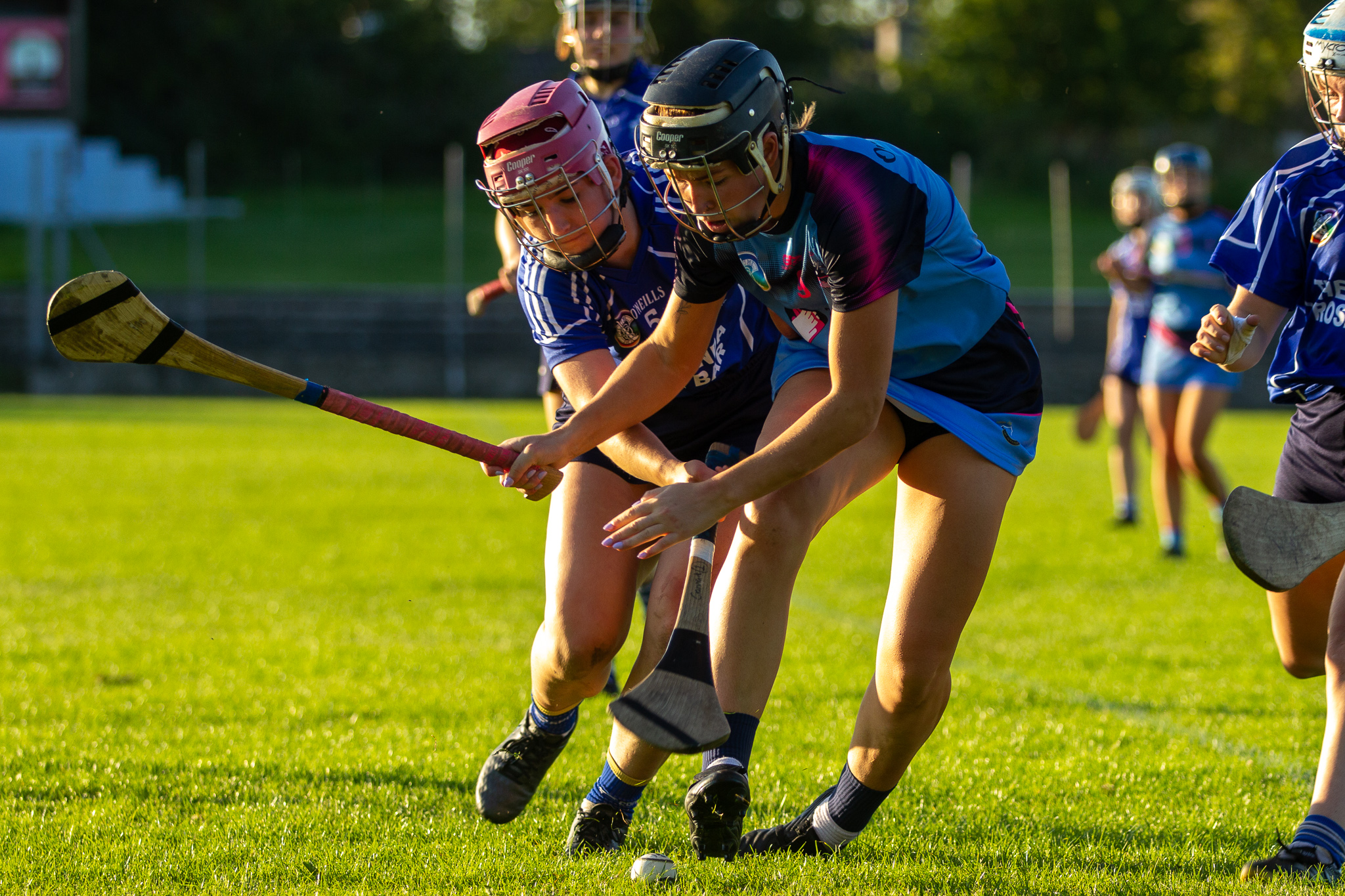 Best of luck to our senior camógs on Saturday next as they seek to capture the club’s very first county senior league title when they play Éire Óg Annacarty in The Camogie Grounds, The Ragg at 12 noon. Due to restricted attendances, the club is hoping to stream this match. Details of which will be published on our social media accounts during the week. 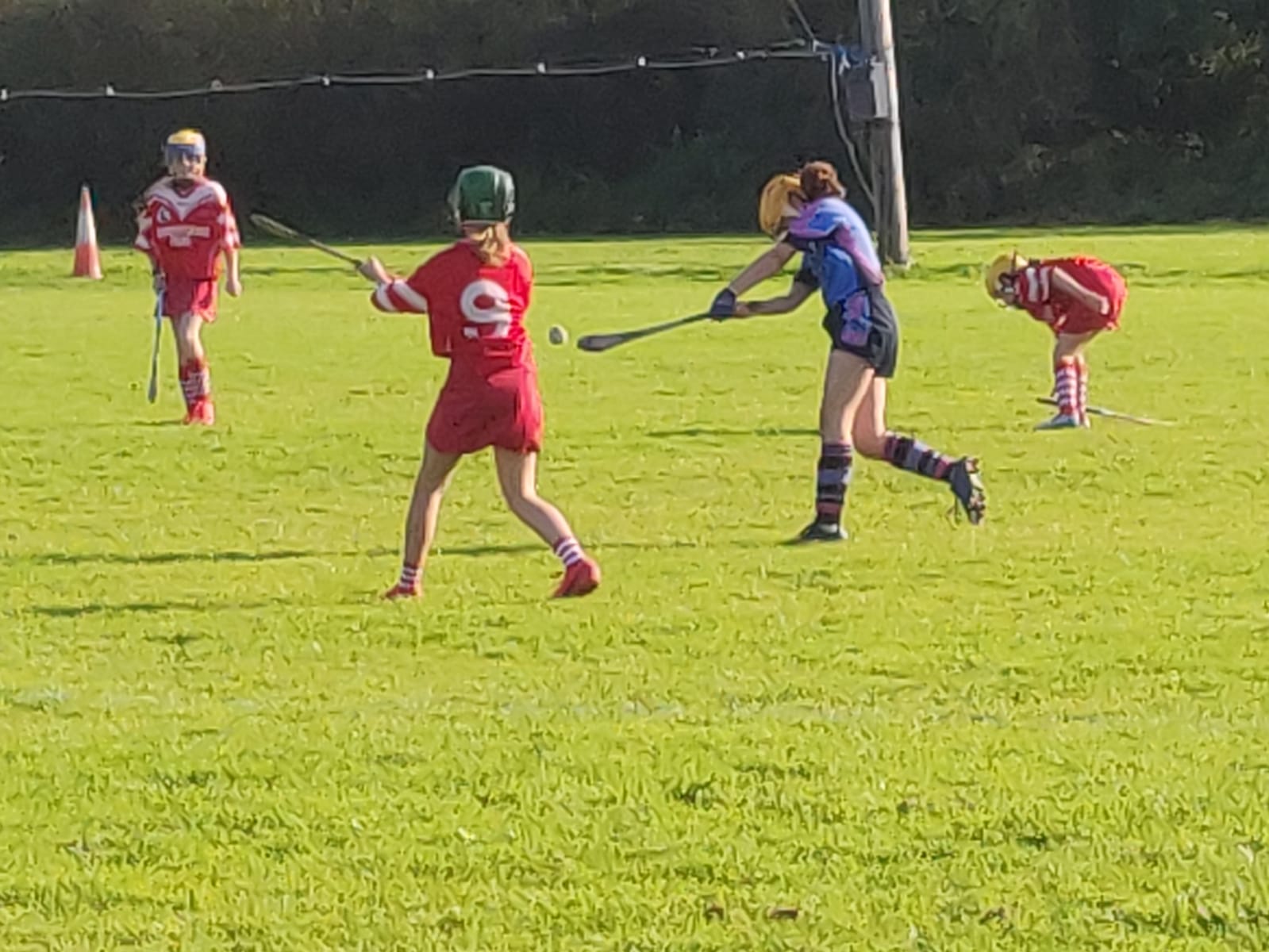 Team 1 played Roscrea in their county semi-final on Sunday afternoon in a Ballinahinch. Playing against a strong wind in the first half, our backs were superb, keeping the Roscrea girls scoreless. We led at half time by a point after a great run and shot from Grace Cleary.


The second half was a ding-dong battle with Roscrea scoring a goal early to go ahead. Grace Cleary got us back ahead after a super run on goal from Sophie Hourigan. She passed the ball goalward and Grace finished it to the net.
Roscrea came back again and scored another goal, putting them back ahead. The Nenagh girls didn’t bow their heads though and after great midfield play by Saoirse Ryan and Anna O’Dwyer, Sophie pounced again to get her low shot into the net.
The Roscrea girls battled right to the end, but our backs put their bodies on the line and held firm to win by a single point. Hard luck to Roscrea and well done to all the girls on a fantastic match. Thanks to all who came to support. Both teams 1 & 2 will now have their co finals next weekend, fixtures to be confirmed. We need all under-12 girls at training this week to prepare. Monday and Thursday 6-7pm. 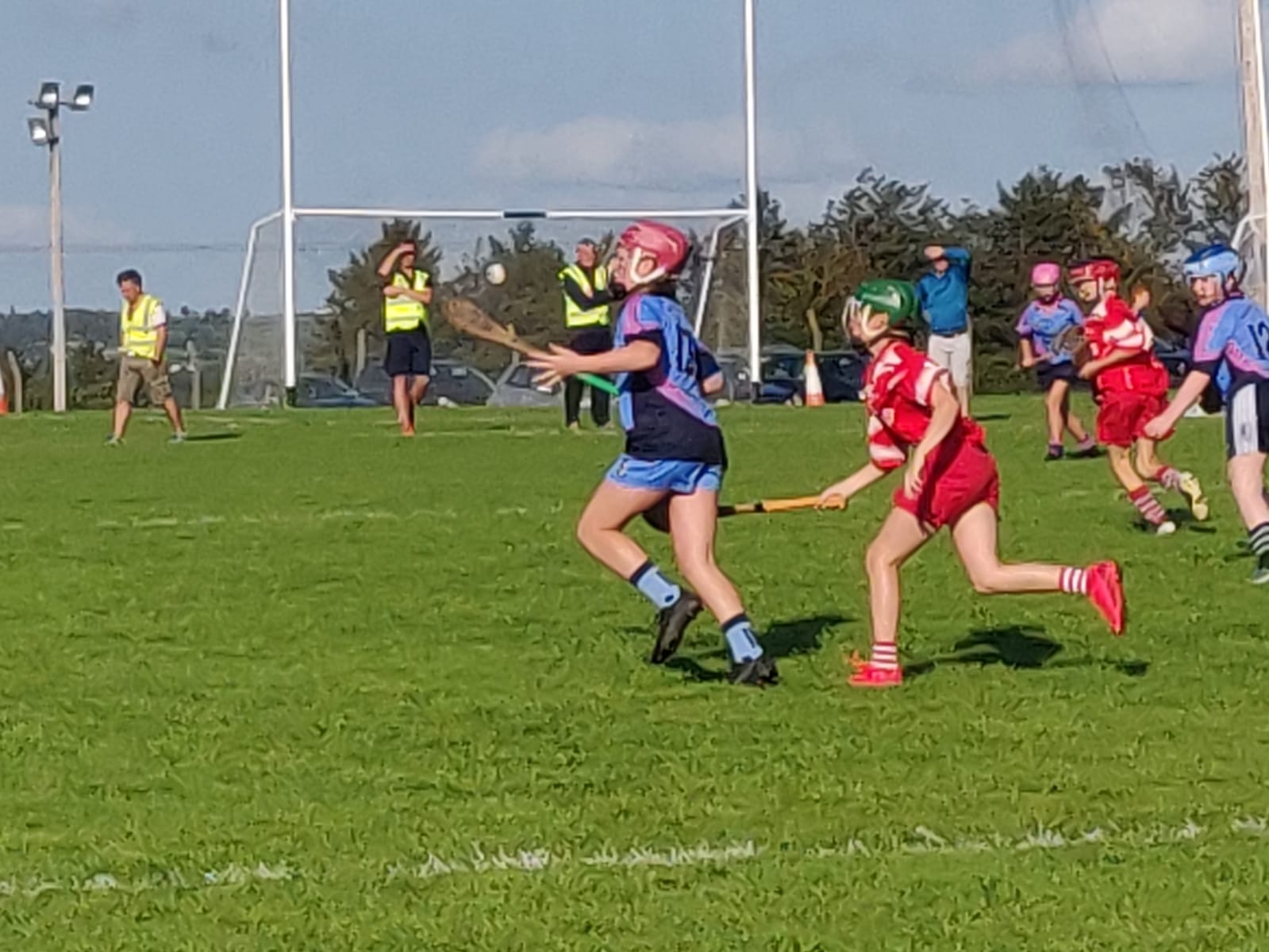 Action from the under-12 match against Roscrea 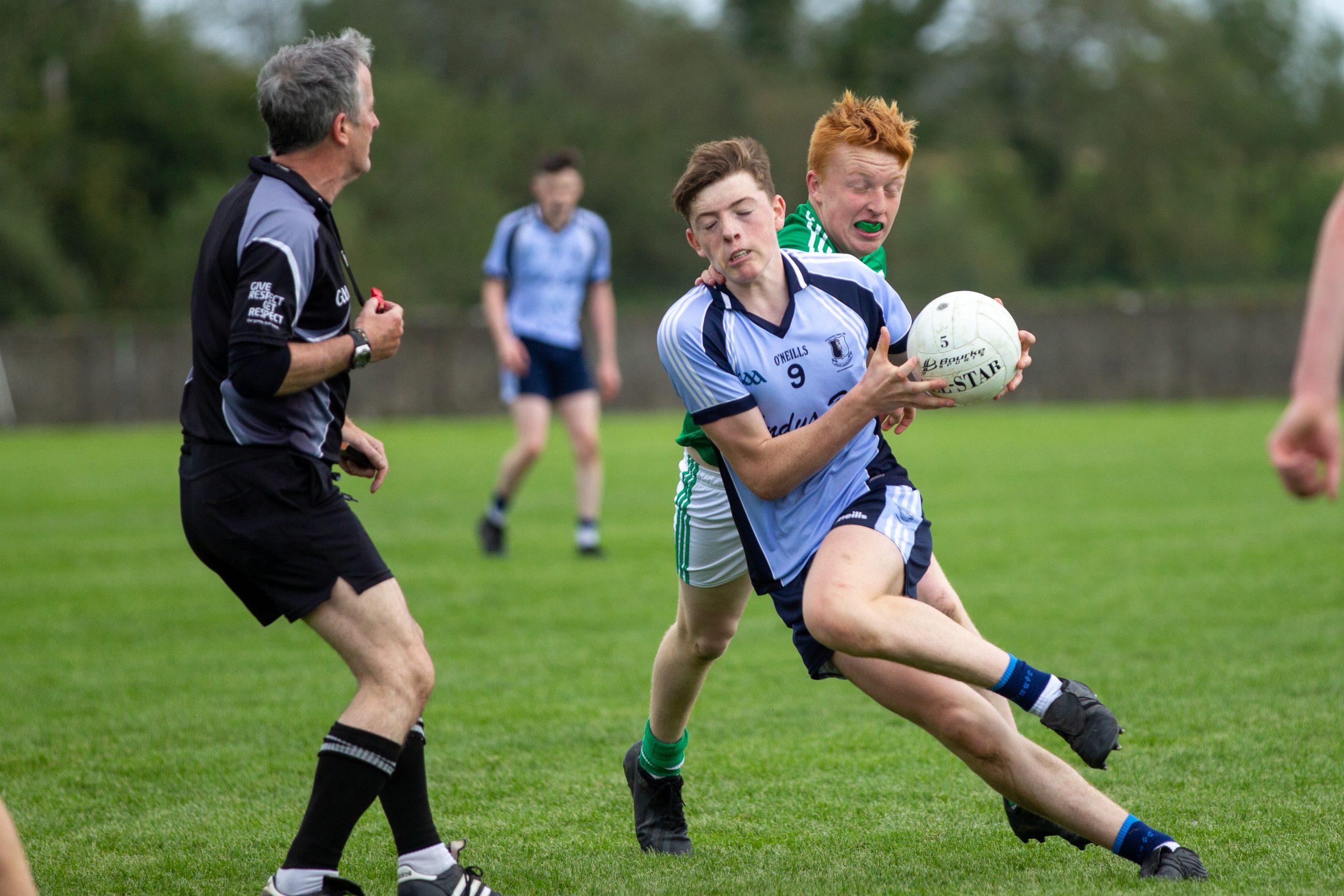 Josh Keller on the attack against Borrisokane 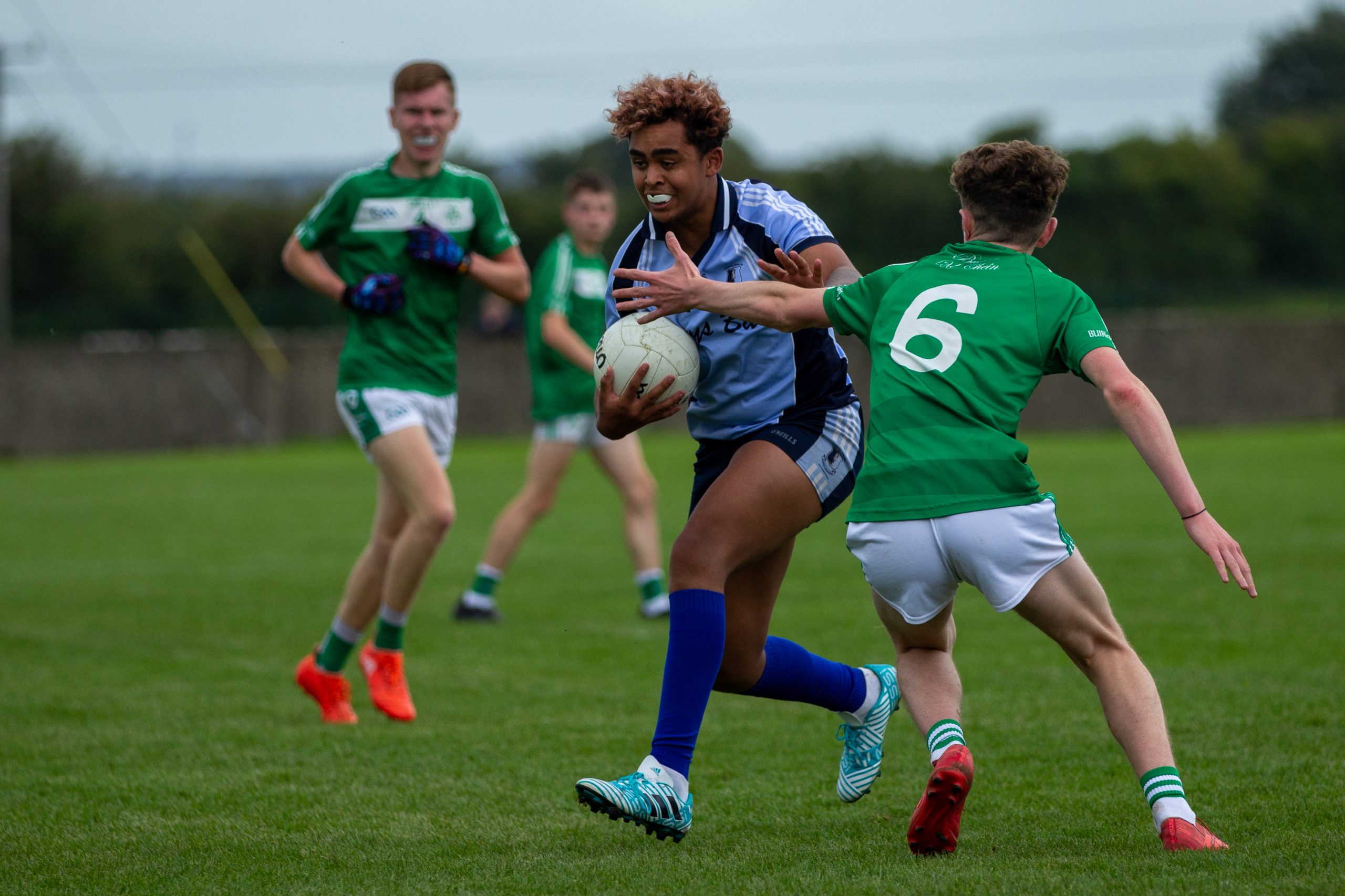 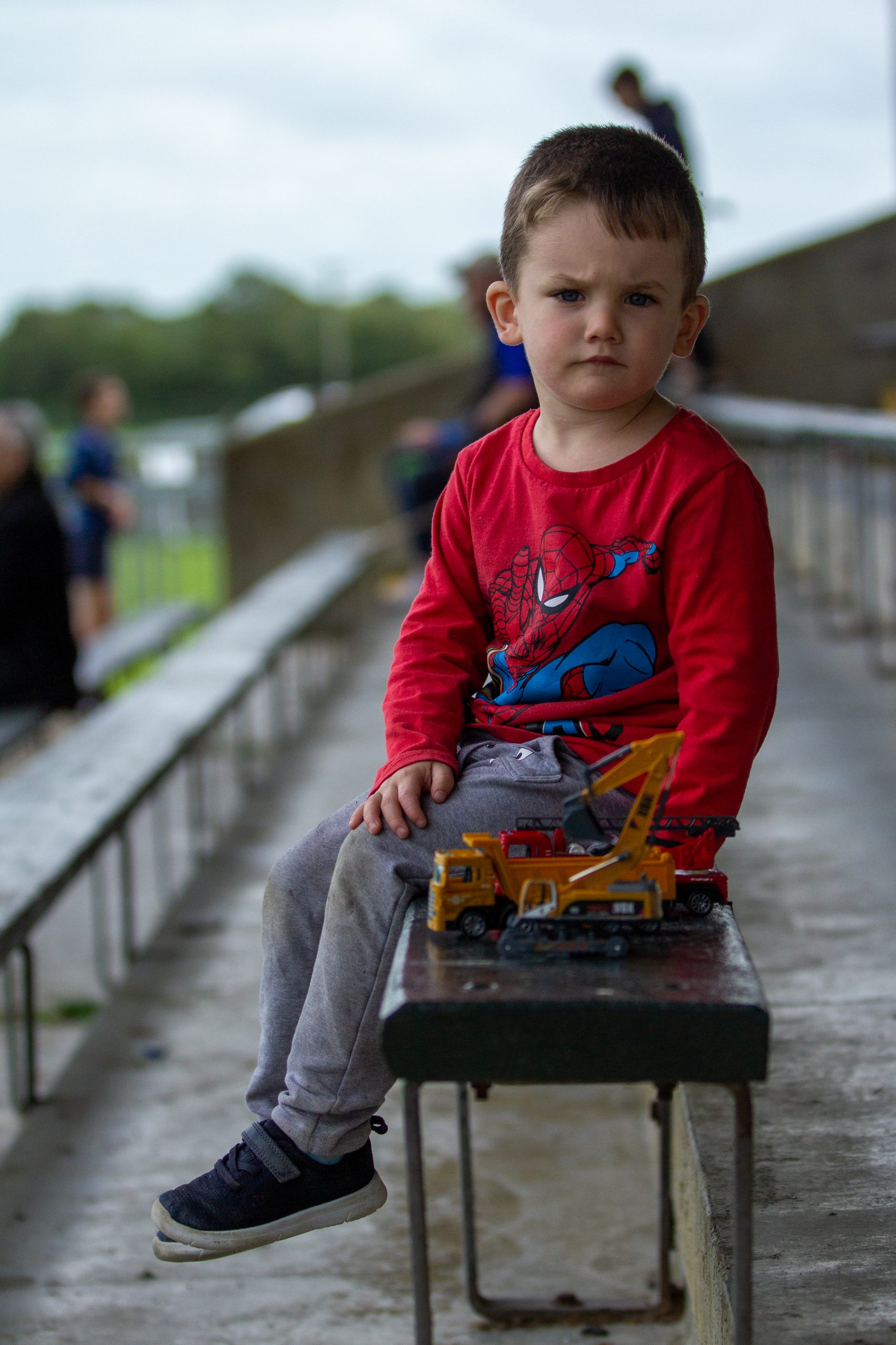 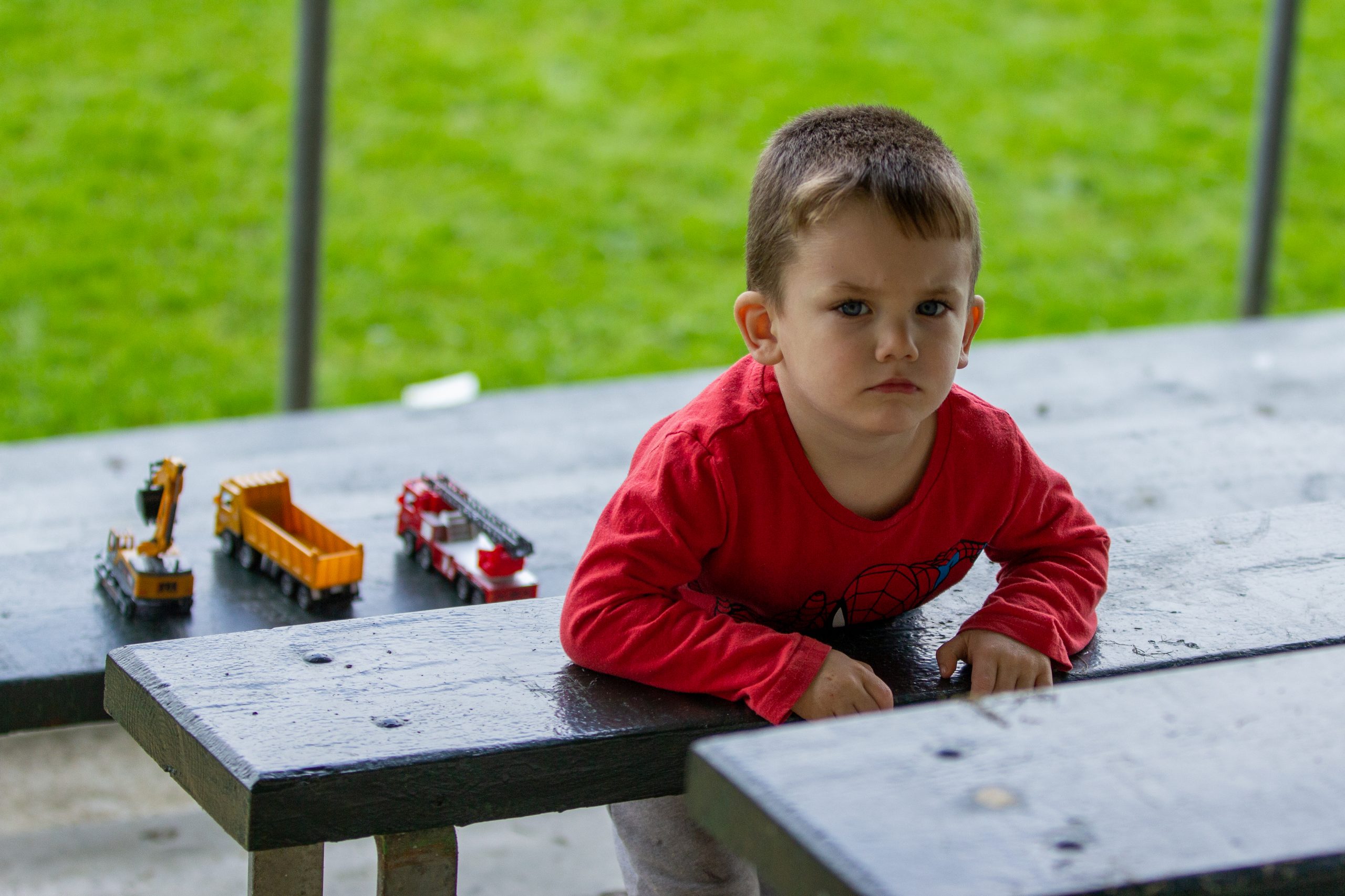 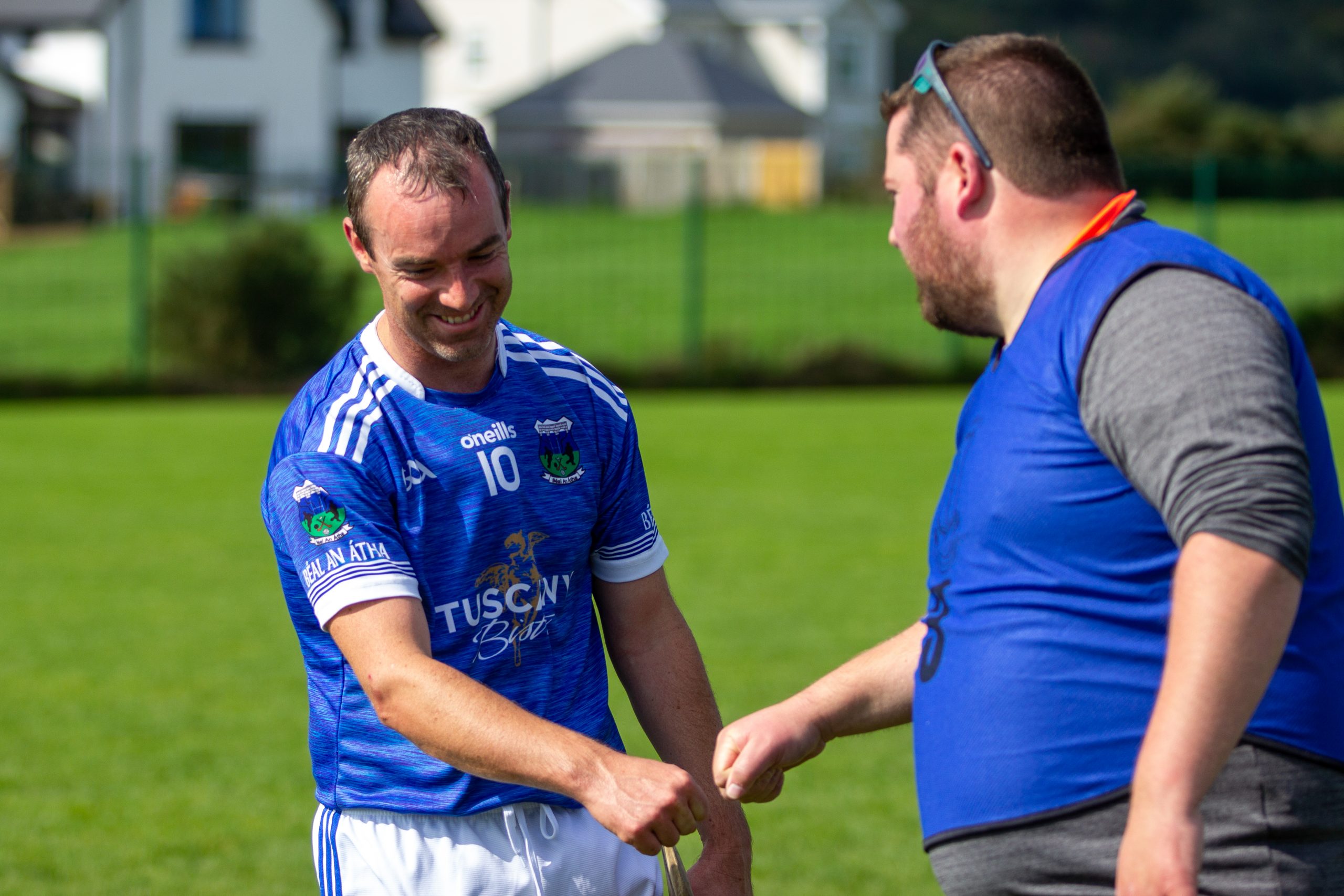