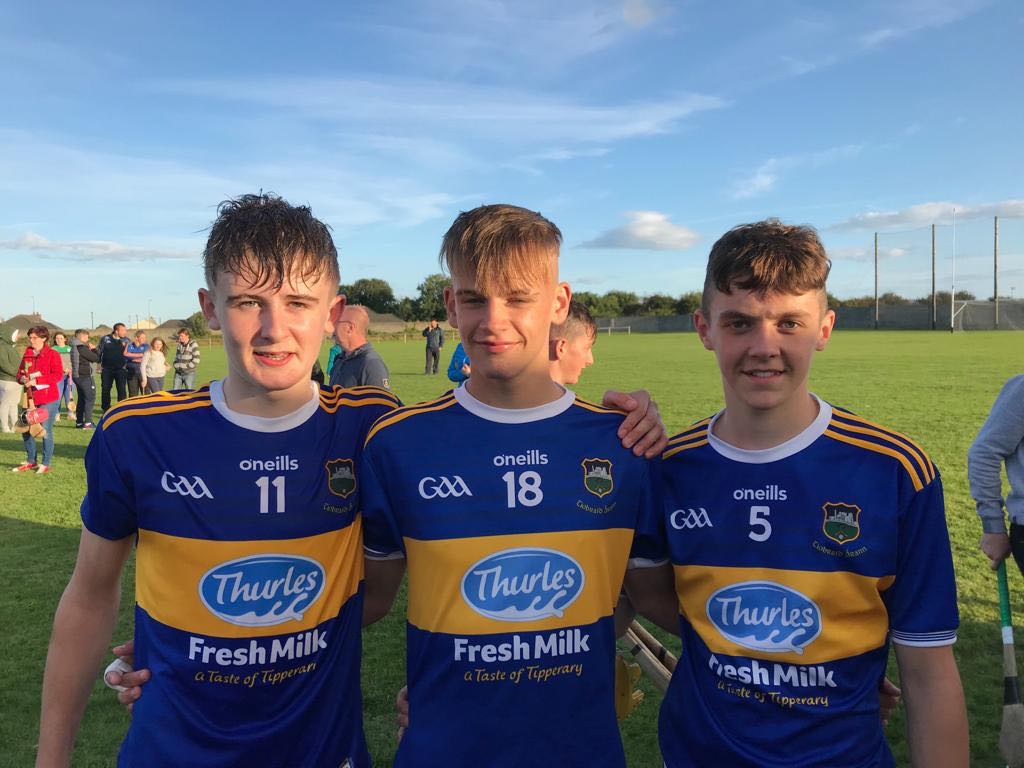 The seniors draw with Loughmore Castleiney, Mason, Jack and Sam are All-Ireland champions while the senior camógs suffer a second championship defeat. All this and more in this week’s news on the Blues

A brilliant Michael Heffernan pointed-free rescued a draw in The Ragg on Sunday against Loughmore Castleiney in the FBD Insurance senior hurling championship as the game finished 1-17 to 0-20. Our final game in the round robin stage is against Burgess in Toomevara at 2pm this Sunday. This is a must win match for both sides to guarantee progression to the knock-out stages of the competition. 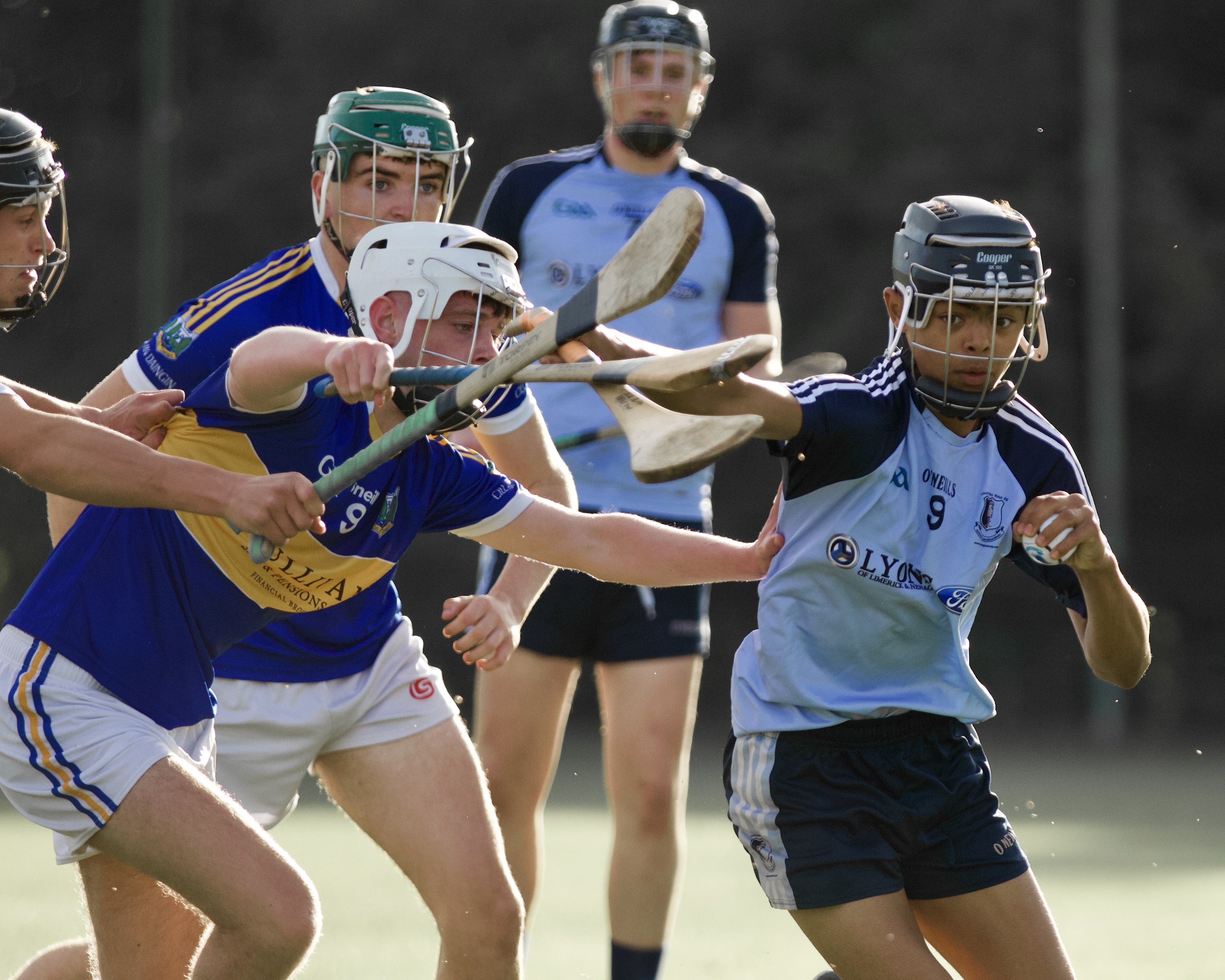 Our minor hurlers were defeated by Kiladangan in Toomevara on Wednesday evening last, 2-23 to 0-14. The club wishes to thank Paul Lillis and his management team for all their hard work this year as well as the panel of players who trained extremely hard and improved their skills immensely over the last number of months. 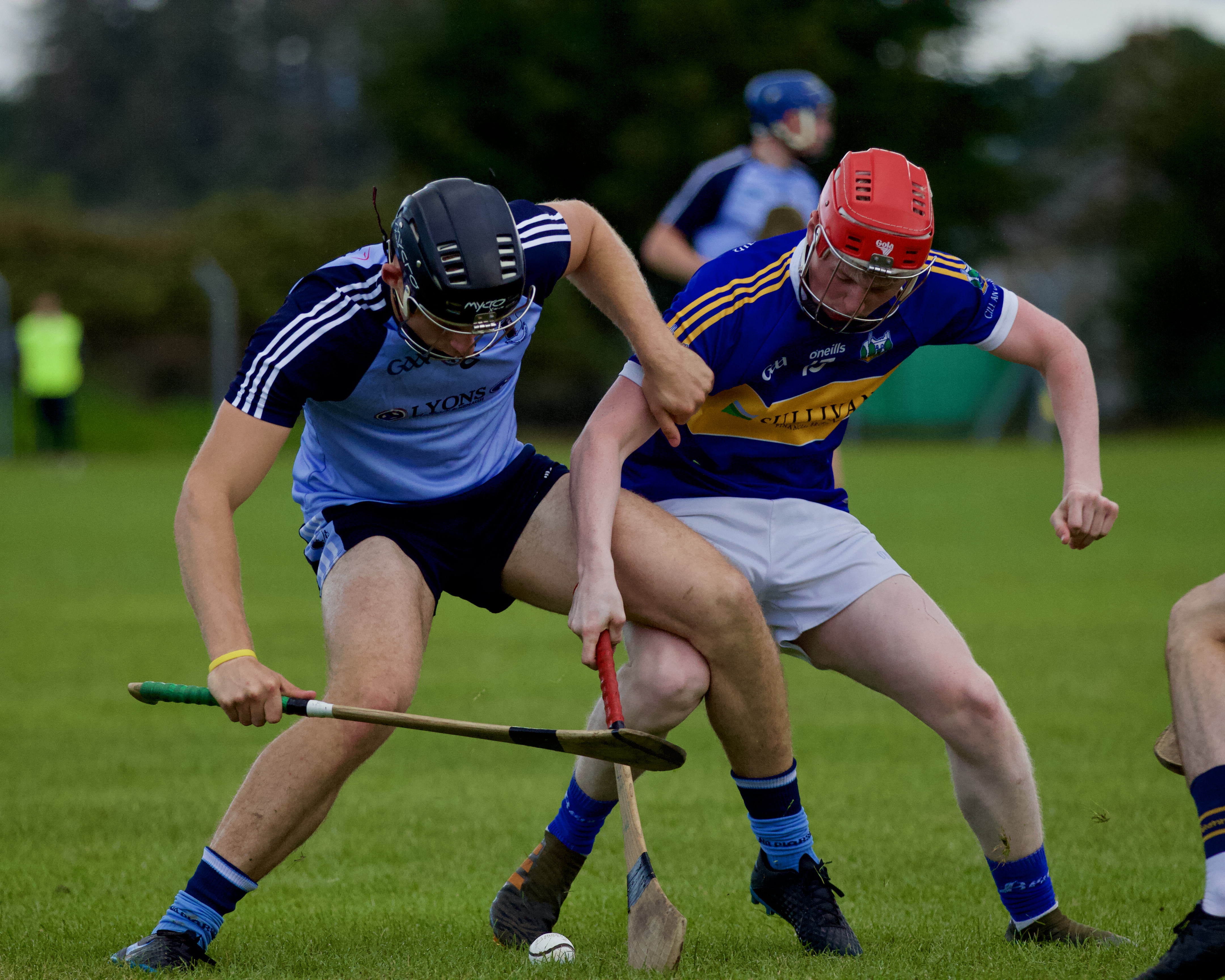 Rory O’Donovan in a tangle against Kiladangan

The All-Ireland medals just keep on rolling in to Tipperary! Three more came home to Nenagh Éire Óg on Saturday when Sam O’Farrell, Jack McLoughlin and Mason Cawley helped the Premier to under-14 All-Ireland success in the prestigious Tony Forristal All-Ireland tournament in Waterford. Well done to the boys, the team, their mentors and all who work behind the scenes. Thank you for all of your hard work and dedication. Tiobraid Árann Abú!

Hard luck but very well done to our under-12 shield county finalists on the manner of their display last Saturday in New Inn against a physically stronger Ballybacon team. The coaches are very proud of the girls, the efforts they put in and the pride that they showed in the Nenagh Éire Óg jersey. They just never gave up. The backs were immense – hooking, blocking and putting their bodies on the line. Midfield and forwards tried their hearts out but it wasn’t to be our day. They are a great bunch of girls with a great attitude. They have all come on so much since we started in the ball alley last November. Thanks to parents for all of your support and encouragement. It was much appreciated. The girls now have a well earned trip to the Camogie All-Ireland to look forward to. Many thanks from the under-12 Camogie mentors Tom Boland, James O Dwyer, Rose Sheridan, Martin Kelly and Michael Cleary.

Best of luck to our minors next Tuesday evening in Nenagh against Burgess.

The seniors were beaten by Cashel Camogie Club 6-12 to 2-5 in the championship and are now in a relegation playoff.


The under-8 boys welcomed Sixmilebridge, Ahane and Kiladangan to beautiful MacDonagh Park this on Saturday morning. The field committee had the field in great shape for us as always. Fourteen teams took part in total. Éire Óg had 40 boys on five teams which was our biggest number so far this year. All teams played three very entertaining games. There was a huge crowd there supporting the children. Our thanks to all the clubs for travelling. Our parents as always gave a wonderful welcome to the visitors providing lots of healthy and nutritious food. No easy task for 120 boys and their families. If any new boys would like to come along and start to play they are always welcome, we train on a Wednesday evening from 5.30pm to 6.30pm and Saturday morning from 10.00am until 11.00am. We will be taking a break for the winter in late October as usual. We have lots of spare hurleys and helmets for anyone looking to give it a go.