Nenagh Éire Óg Juvenile Club will hold a clothes recycling drive in the MacDonagh Park complex on Saturday, August 27th between 10 and 11:30 a.m. Full details can be seen on the leaflets below. 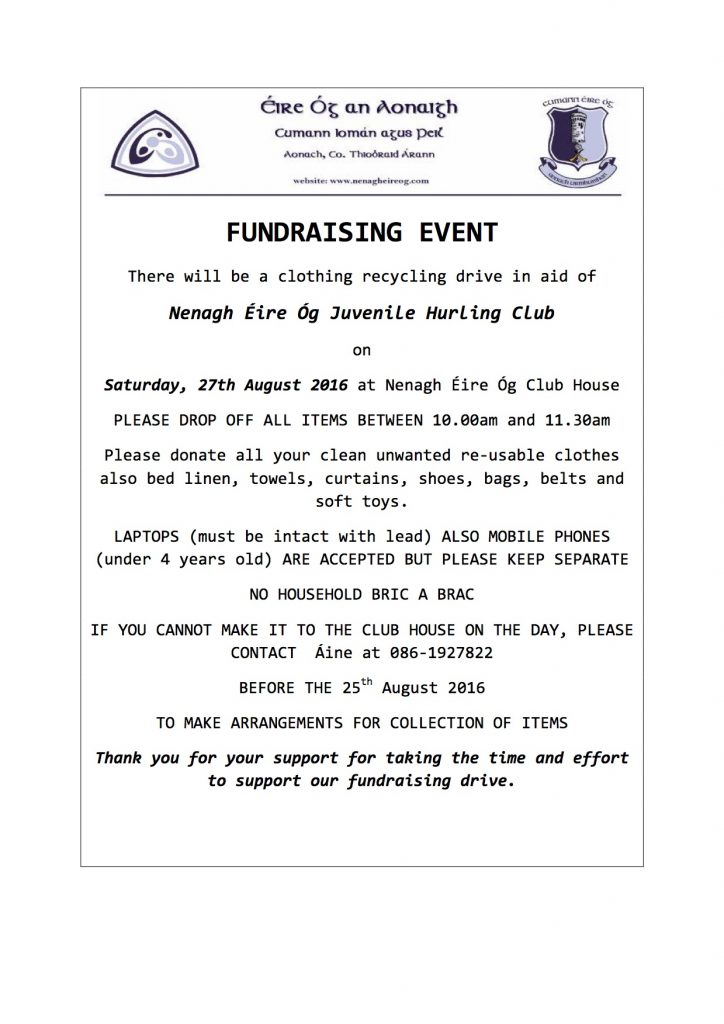 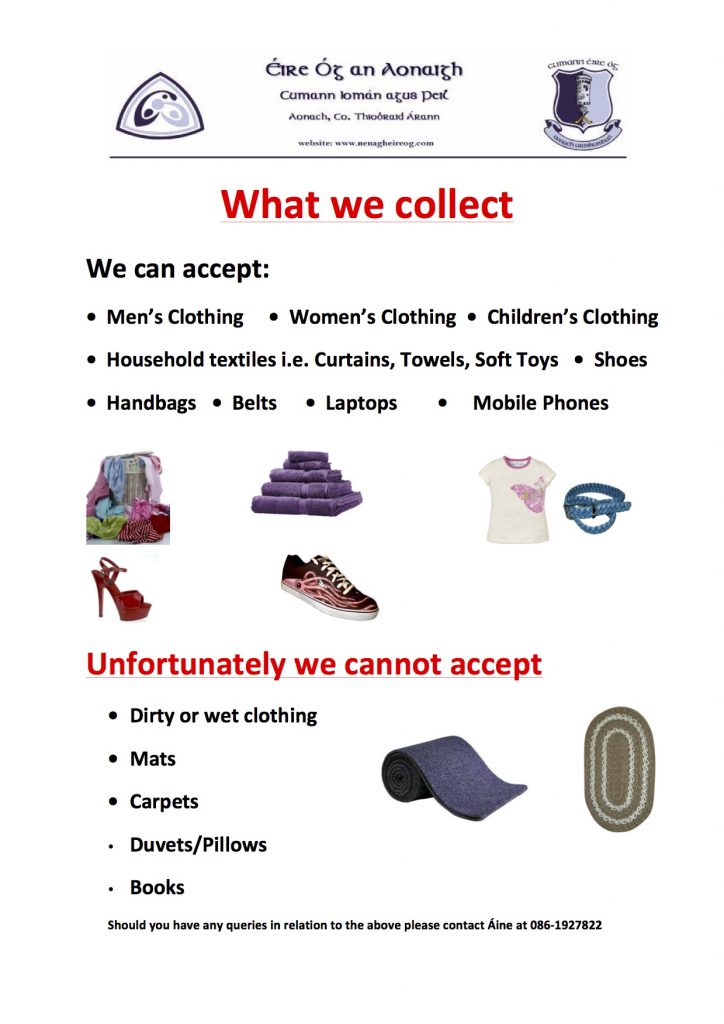 The Nenagh Éire Óg Golf Classic was held in Nenagh Golf Club last Friday, and was a great day for all involved. A huge thanks to all who took part in the event, and specifically to all our sponsors who made such an enjoyable day possible.

Congratulations to our winners, the team entered by The Pantry Café, Nenagh. Each member of the team received a stunning LG Television for their efforts. 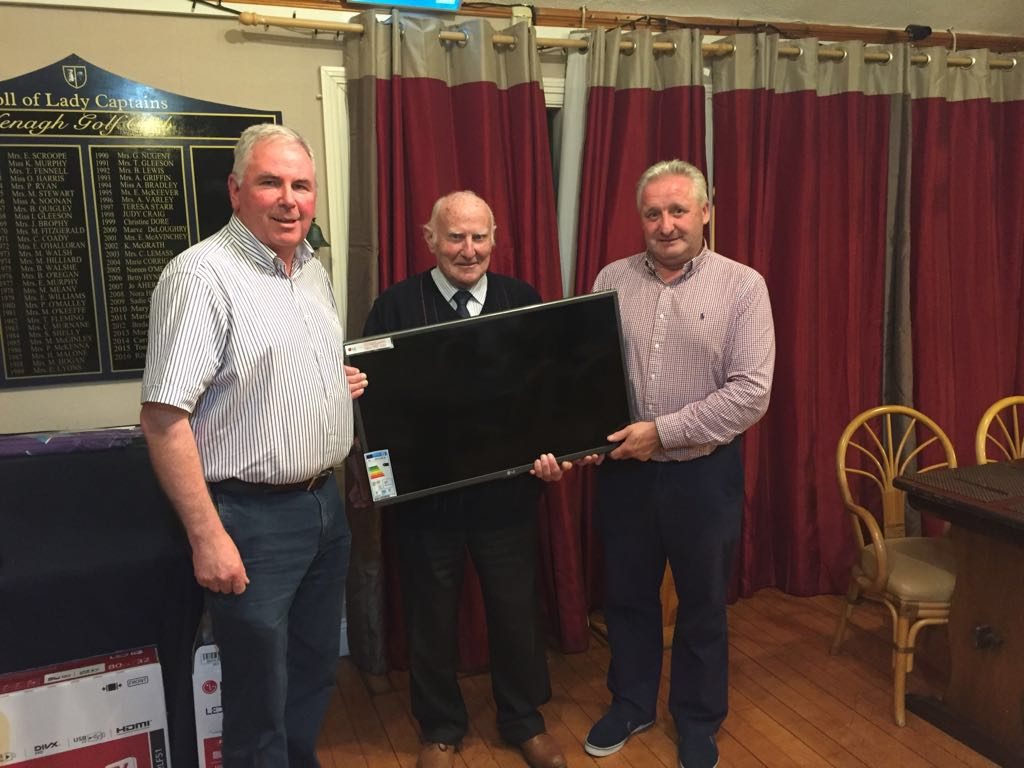 Rody Bolands was established in Nenagh in 1873 by the MacMahon family from Clare, and transferred to Edward Boland (Rody’s father) at the turn of the century.
The original furnishings, including the counter, back fitting and more were all moved to Rathmines in 1994, where they can be admired today.
Rody Bolands is now owned by Nenagh man Kieran O’Meara and his son, Brian.
Kieran went to school in Nenagh and played underage with Nenagh Éire Óg, before moving to Dublin.
He is also one of the founding members of the Tipperary Supporters Club, and was Chairman when Tipperary won All Irelands in 1989 and 1991.
The next time you’re in Dublin, head to Rodys, browse through Rody’s old books (perhaps find a relation mentioned), grab a bite to eat, watch the match on one of our 5 HD Screens, or dance the night away with our late late bar. 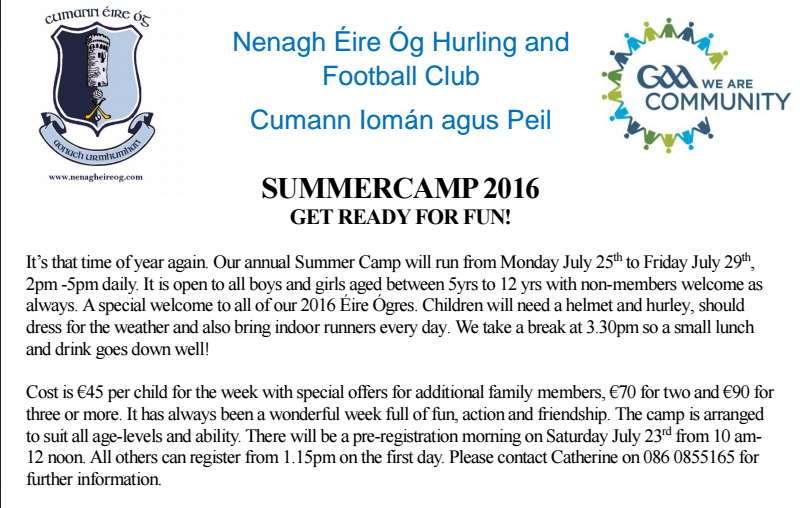 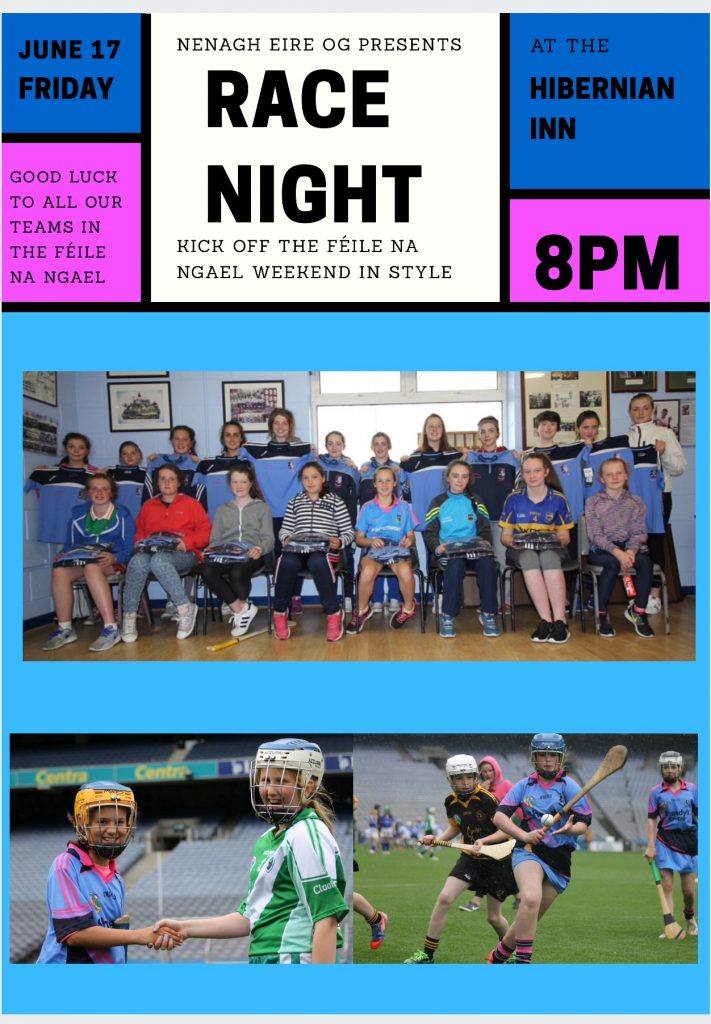 Please join us for our Race Night this Friday at 8pm in the Hibernian Inn. Music, entertainment and plenty of fun guaranteed.

Healthy club initiative: The Healthy Club Project team are hosting a health and wellbeing night in the Abbey Court Hotel on Wednesday March 23rd at 7.30pm. The talk, which is entitled “Minding the Body, Minding the Mind”, will be given by Dr. Fergus Heffernan PhD, who is a renowned psychologist and psychotherapist and a leading educator in the area of stress management and how it relates to our mental health. Fergus has worked with the Irish Defence Forces, the United Nations and NATO. He is a visiting lecturer and Workshop Director in Trinity College Dublin, Columbia University New York and Boston University USA.

Membership: A final reminder to everyone and especially all players and mentors that membership for 2016 is now overdue and must be paid to any club officer or online before the end of February. The cost of membership is again very reasonably priced at €25 with a family membership option A priced at €60 and an option B priced at €85.

National Clubs draw: A big thanks to all our supporters who contributed to the club finances through participating in the G.A.A. National Club Draw. The draw will take place on Friday, 11th March 2016.

Éire Ógres: Thank you to the wonderful young stars of our month long ‘Nenagh Éire Ógres GAA For Beginners Camp’ which finished on Saturday. The kids were presented with camp training T-Shirts to help them start their hurling careers in the coming weeks. Many thanks also to the trainers and family members for their support of the kids and club. Under-6 training will commence soon. Please keep an eye on the notes for details. 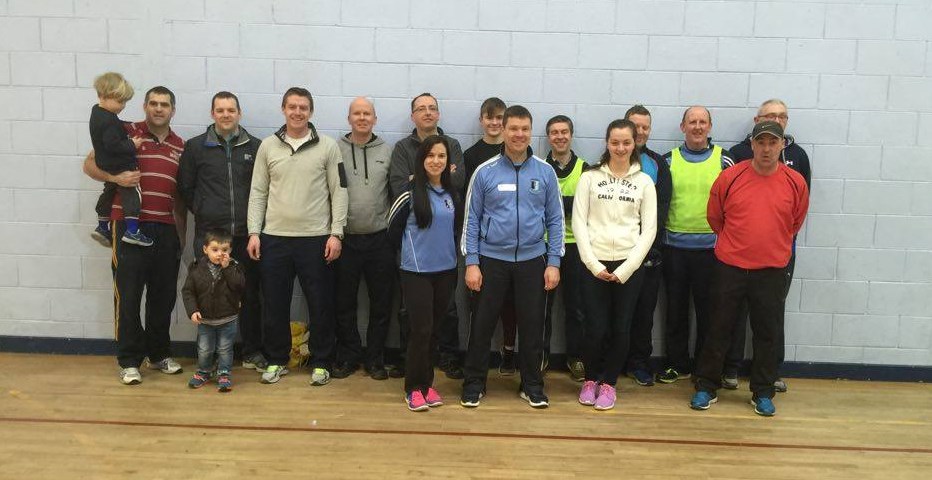 Under-10: Hurling training resumes on Saturday at 10am.

Under-12: The football championship kicks off this weekend with both A and D teams hosting Newport on Sunday morning. Gum shields compulsory.

Under-16: The under-16 team play Lorrha Rovers Gaels on Saturday in Nenagh at 4pm. Please come out to support the lads.

Scór na bPaistí: Well done to our super Scór competitors who won two North Finals on Sunday with our Ballad Group and Figure Dancers being successful on the day. The best of luck to them in the next round!
Camogie News…

Intermediate: Training for 2016 commenced on Saturday last for the entire panel and will continue again on Tuesday. All players are asked to attend as the league will be starting in the next few weeks.

Under-16: Training for this panel continues on Tuesdays and Fridays. All our other underage teams will be commencing training in the next few weeks and management will be in touch with the details.

Registration: Registration is due for the coming year. If you have not already paid please do so as soon as possible or contact Caitriona Morris on 087-7776135

Tipperary: Well done to the Tipperary under-16 side which defeated Clare on Sunday. Niamh Sheridan, Rachel O Connor and Caroline Browne all played. Best of luck to this team in the Munster final in two weeks time. Also the county minor team had a good win over Dublin on Saturday with Hazel McAuliffe, Grace O Brien and Maeve Coffey featuring. Best of luck in their next game against Clare in two weeks time.

Best Wishes: We send our best wishes to Cahir Camogie Club who contest the All Ireland intermediate final on Sunday next.

County SH Challenge cup: We have been drawn to play Templederry in the SH Challenge cup and this game which is our first completive game of 2016 is scheduled to take place on the w/e of the 6th March.

Harty Cup final: A crowd in excess of 3,000 were in attendance at the weekend for the Harty cup final. Thanks to all members who helped out in preparing the grounds and facilities for the event and also to all those that helped with general stewarding and all the other activities on the day.

Congratulations: Well done to Andrew Coffey and who made his SH league debut against Kikenny at the weekend, following on from Daire Quinn’s debut the previous weekend. Best of luck for the rest of the campaign to Andrew, Daire and Barry Heffernan who are all members of the Tipperary SH panel.

Membership: A reminder to everyone and especially all players and mentors that membership for 2016 is now overdue and must be paid to any club officer or online before the end of February. The cost of membership is again very reasonably priced at €25 with a family membership option A priced at €60 and an option B priced at €85.

National Clubs draw: A big thanks to all our supporters who contributed to the club finances through participating in the G.A.A. National Club Draw. The draw will take place on Friday, 11th March 2016.

Volunteer Appeal: With the numbers we currently cater for, there is a huge need and opportunity for more people to become more involved in the day to day running of club affairs. Whether you have skills in administration or coaching, we are actively seeking volunteers to come forward, If you are interested in getting involved in any capacity call 0872850732, contact any club officer or email eireogneneagh@gmail.com 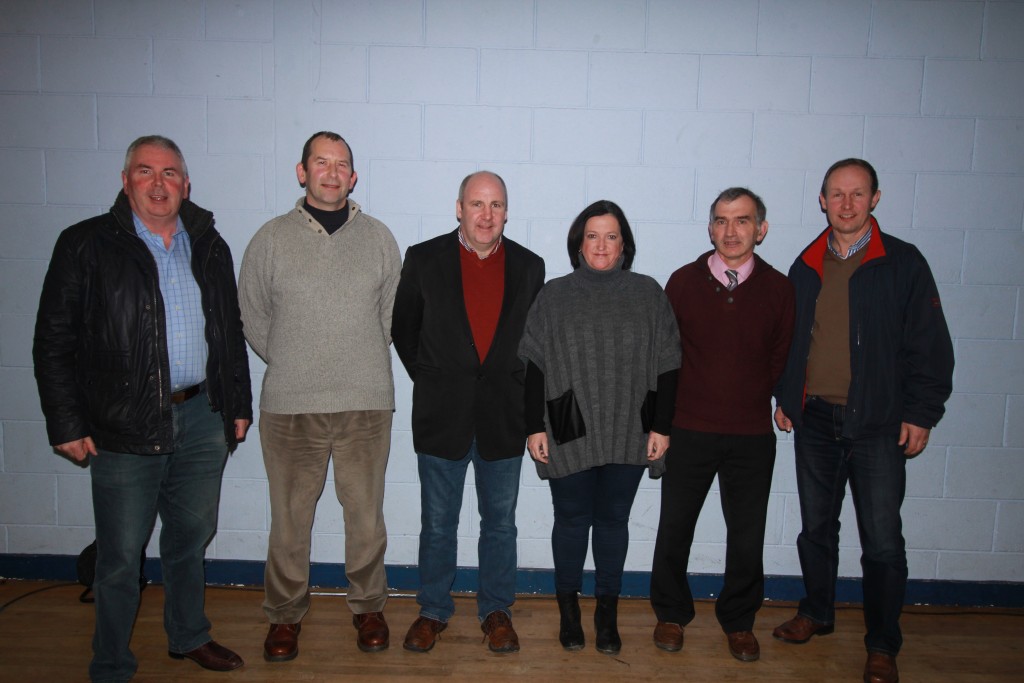 Healthy club initiative: Our thanks to former Tipperary hurler John Leahy on giving a superb enlightening talk titled ‘Substance Awareness” last Saturday evening in the Complex. He spoke to the many teenagers in attendance and their parents about the dangers of substance abuse at a young age and also gave a fascinating insight into his own sporting life both on and off the field.

Éire Ógres camp: Our Éire Ógres GAA for Beginners camp finishes on Saturday. All registered members will be presented with a cert and a special t-shirt as a reward on the day.

Under-12: Training continues at 6.30pm on Monday evenings. Gum shields are compulsory. The first football championship match will be on March 5th.

Under-14 & under-16: football training continues this week. More from mentors by text during the week.
Scór na bPaistí : The best of luck to our team who will compete in the figure dancing, ballad group and recitation in the North final on Sunday from all in the club.

CAMOGIE:
Tipperary: Sunday was a very proud day for the club as Alanna Morris became the second player from Nenagh Éire Óg (Ciara McGrath being the first) to play a competitive game for the county senior side as she came on at corner back in the league game on Sunday in The Ragg against Galway. We hope this will be the beginning of many appearances in the senior set up from Alanna. We also send our congratulations to the county minor side who won against Kilkenny, the reigning all Ireland champions, by two points. Grace O Brien and Hazel McAuliffe both played and had fine games while we also had three more players on the panel, Ruth Hassett, Maeve Coffey and Sarah Quigley.

Under 16: Training continues for this panel every Tuesday evening in the complex in MacDonagh Park at 7pm in the hall. 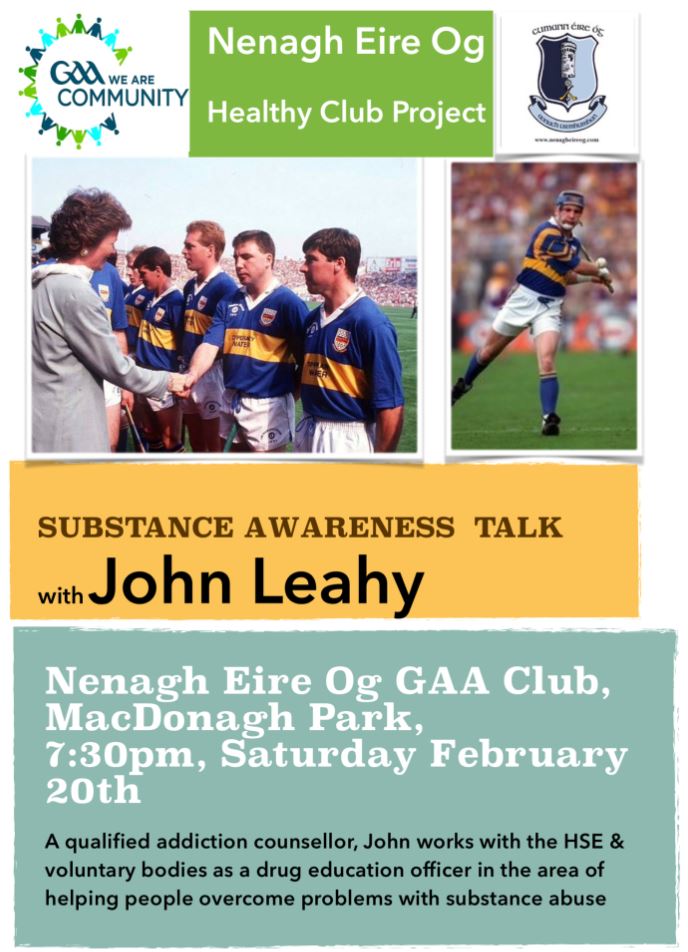 A talk by former Tipperary hurler John Leahy titled ‘Substance Awareness” has been organized for Saturday Feb 20th at 7:30pm in the Complex. While primarily targeted at u14, u16, minors players and their parents from the juvenile and camogie club, all club players and members are invited to attend. Now a qualified addiction counsellor, John works with the HSE and voluntary bodies as a drug education officer in the area of helping people overcome problems with substance abuse.

Welcome to the Newest Ógres!

A big welcome and well done to our many new Nenagh Éire Ógres who started their four week camp this morning. There was great fun had and a fantastic atmosphere in the hall…..We can’t wait to have you all back next Saturday. 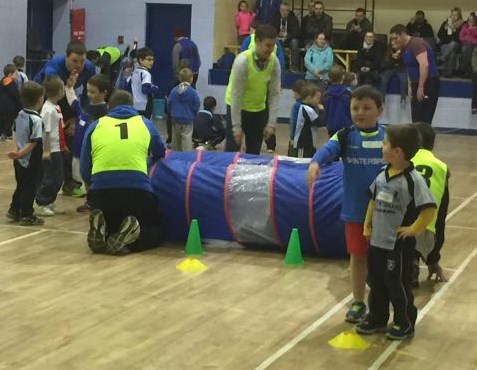 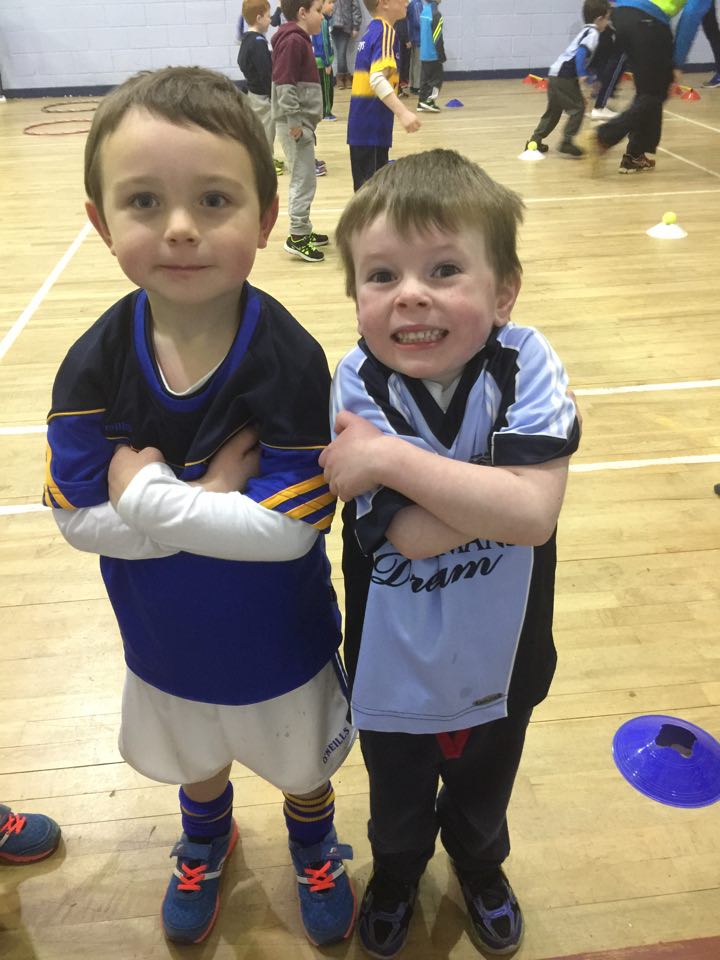 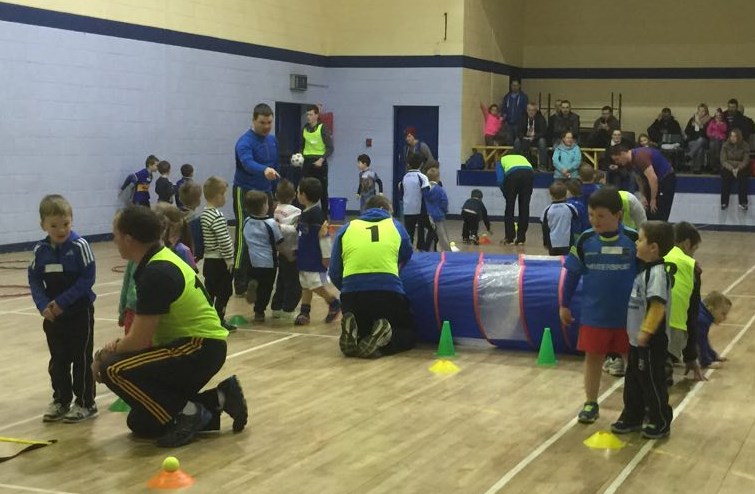 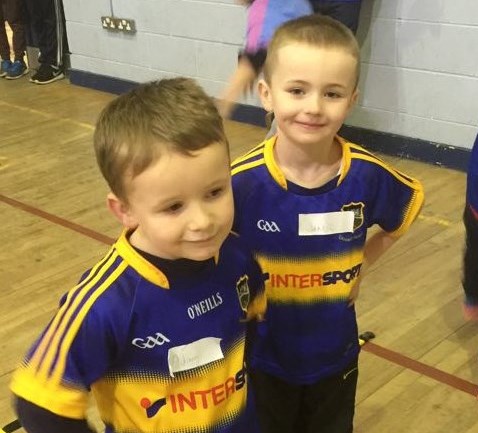 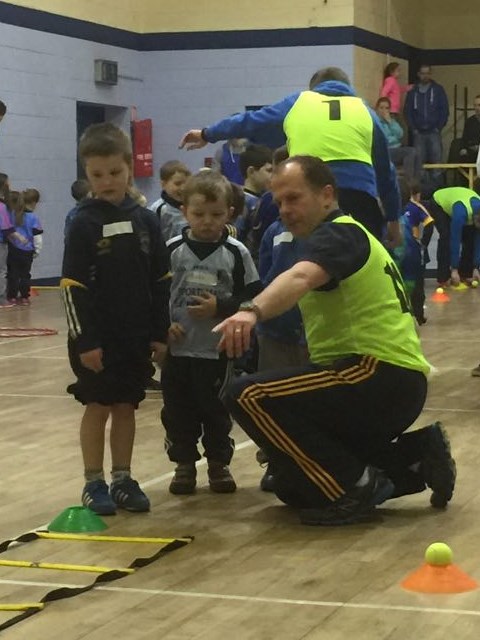 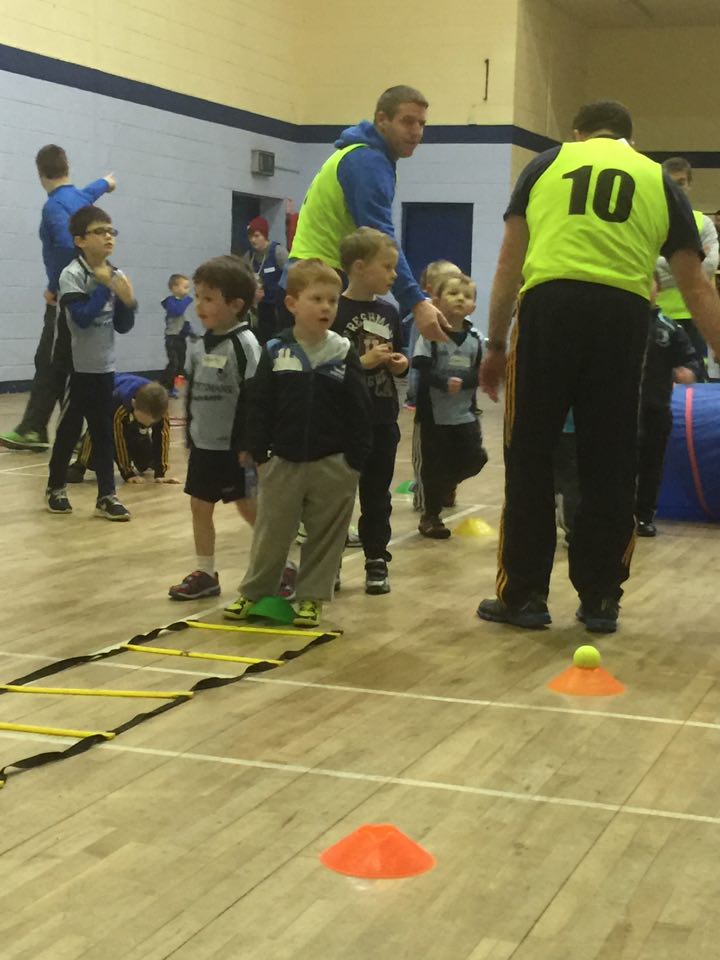