GAA President Liam O’Neill will launch the first two volumes of the book ‘A Central Culture – Gaelic Sport in Nenagh’ at the MacDonagh Park complex on Sunday, December 7th. This terrific piece of work has been compiled by Donal A Murphy, PJ Maxwell and Nancy Murphy. 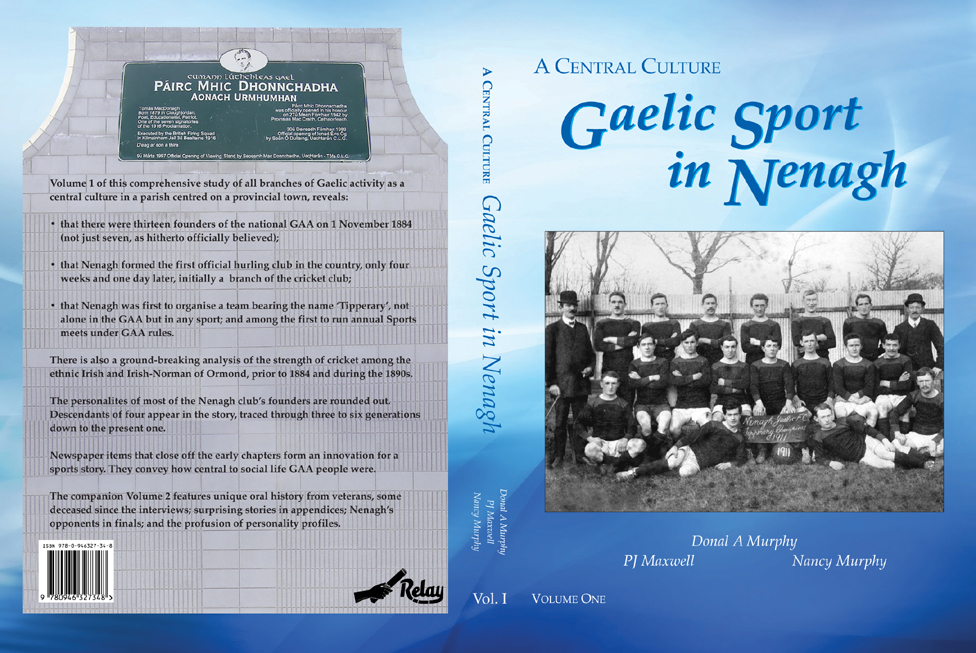 The cover of volume one of ‘A Central Culture – Gaelic Sport in Nenagh’.

In all ‘A Central Culture – Gaelic Sport in Nenagh’ will comprise three volumes – volume one covers the years 1884-1933, volume two 1934-1959 and volume three 1960-2014. GAA President Liam O’Neill will launch the first two volumes of the book on Sunday, December 7th while the third volume will be published in 2015.

Along with the physical book a huge amount of digital content associated with ‘A Central Culture – Gaelic Sport in Nenagh’ will be published via the club website. That digital content will include: all photographs including those used in the written content, a detailed listing of every player on every team at every level in every code to have played for Nenagh Éire Óg from 1960 onwards, a listing of every match played during that period and a copy of every reference to Nenagh Éire Óg contained in the Nenagh Guardian files.

Volume one of this fantastic and comprehensive study of all branches of Gaelic activity in Nenagh will reveal some notable facts:-

1) that there were thirteen founders of the national GAA on November 1st 1884 (not just seven, as hitherto officially believed)
2) that Nenagh formed the first official hurling club in the country, only four weeks and one day later, initially a branch of the cricket club
3) that Nenagh was first to organise a team bearing the name ‘Tipperary’, not alone in the GAA but in any sport; and among the first to run annual Sports meets under GAA rules.

The book will also include a ground-breaking analysis of the strength of cricket among the ethnic Irish and Irish-Norman of Ormond, prior to 1884 and during the 1890s.

The personalities of most of the Nenagh club’s founders are rounded out in the book – descendants of four appear in the story and are traced through three to six generations down to the present one.

The volume two companion features a unique oral history from veterans, some deceased since the interviews; surprising stories in appendices; Nenagh’s opponents in finals; and the profusion of personality profiles.